Antoine Laurent Lavoisier (1743-1794) was a French chemist born in Paris on August 26, 1743. Son of a wealthy tradesman, Lavoisier studied law together with mathematics, astronomy, botany, and chemistry at the College Mazarin. His interest in chemistry, aroused undoubtedly by his great teacher, G.F. Rouelle, surpasses his enthusiasm for a legal career. Therefore, at the age of twenty-one, although fully trained for the legal profession and admitted to the French bar, Lavoisier dedicated his life to science and by 1765 his first scientific paper was presented to the Académie des Sciences. In 1766 a paper on the lighting of the streets of Paris received a gold medal which had been offered by the Académie. The next year Lavoisier ammopaniei his former teacher, Guettard, on a trip through France on a geological survey. He gathered and studied specimens for a proposed mineralogical atlas, and in 1768 constructed the first geological chart of France. This same year he was nominated associate member of the Académie des Sciences. 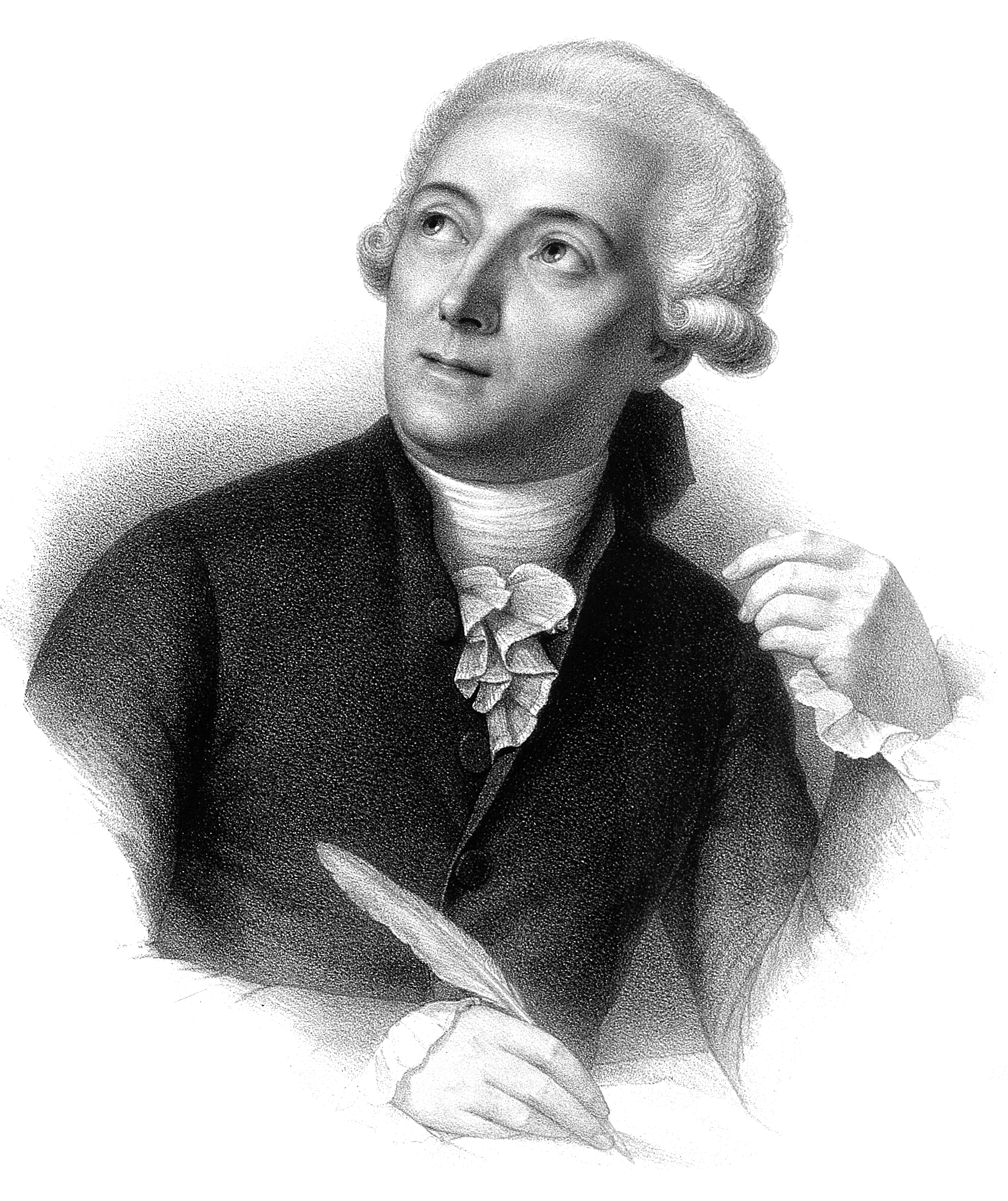 In 1770 Lavoisier commenced his famous studies on combustion, and two years later deposited a sealed note with the Académie in which he recorded that sulphur and phosphorous increased in weight upon its reduction to lead.

“About eight days ago I discovered that sulfur in burning, far from losing weight, on the contrary, gains it; it is the same with phosphorus; this increase of weight arises from a prodigious quantity of air that is fixed during combustion and combines with the vapors. This discovery, which I have established by experiments, that I regard as decisive, has led me to think that what is observed in the combustion of sulfur and phosphorus may well take place in the case of all substances that gain in weight by combustion and calcination; and I am persuaded that the increase in weight of metallic calyxes is due to the same cause… This discovery seems to me one of the most interesting that has been made since Stahl and since it is difficult not to disclose something inadvertently in conversation with friends that could lead to the truth I have thought it necessary to make the present deposit to the Secretary of the Academy to await the time I make my experiments public.”

These studies made it possible for him to propose the oxygen theory immediately following Joseph Priestley’s announcement in 1774 of the discovery of oxygen. Lavoisier’s new system of chemistry led to a complete revision in the classification of elements and in chemical nomenclature, a change which was accomplished only after several decades of bitter controversy between the pholgistians and the antiphogistians. 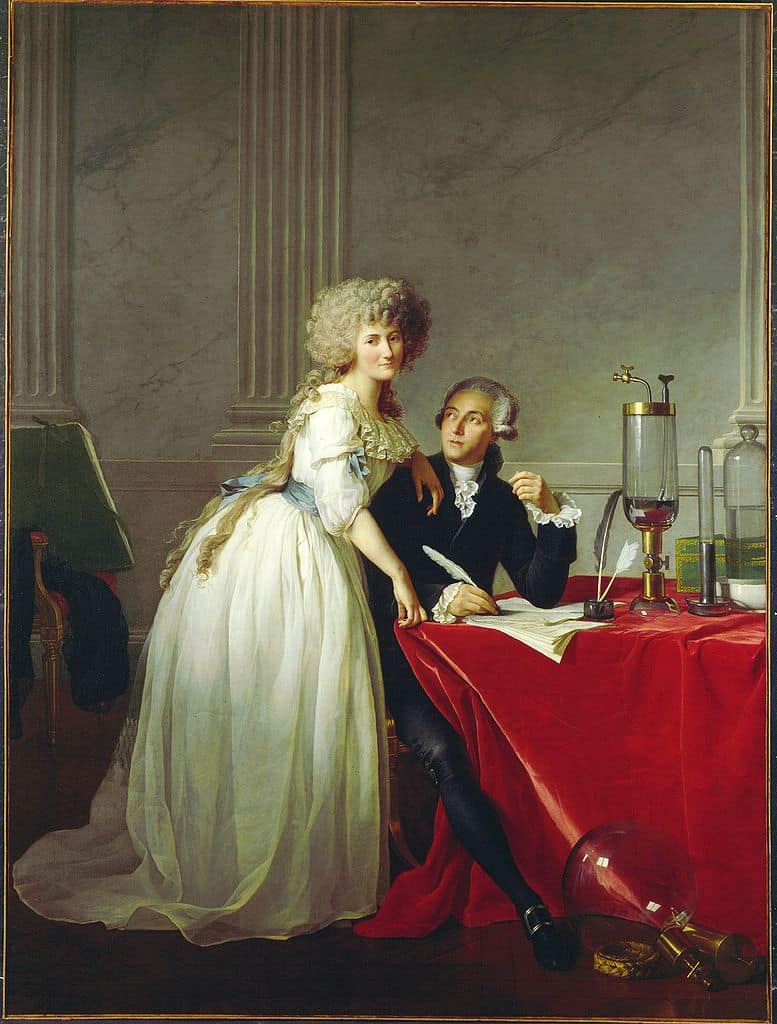 By 1777 Lavoisier published a full report of his new theory, giving oxygen its name (oxygène, or ‘acid producer’ since he thought, incorrectly, that oxygen was the necessary ingredient of all acids), in opposition to the name ‘dephlogisticated air’ which was used by Priestley. On June 25, 1783, he announced with P.s. Laplace, that water was a compound of hydrogen and oxygen. In the meantime, however, Henry Cavendish had already anticipated him. Lavoisier’s studies were followed by quantitative measurements on changes in weight attending the combustion of numerous organic compounds, and calculations from that of their percentage composition. Such measurements caught the fancy of the chemists, and interested them in his theories. Accordingly, in collaboration with C.L. Berthollet and other, Lavoisier published a reformed system of chemical terminology in 1787 and a complete reclassification of the elements in 1789. Lavoisier is responsible for the clear concept of ‘element’ as we understand it today. During this decade several investigations were carried out in a number of fields: liquefaction of gases, calorimetric investigations, fermentations, and the analogy between combustion and respiration in explaining the cyclical processes in animal and vegetable life.

During the progress of the chemical revolution, in which Lavoisier emerged as a victor, another revolution was proceeding in which  he was destined to play a tragic role. In 1796 Lavoisier had received an appointment to the the ferme générale, a government financial body whose extortionate methods of collecting indirect taxes had gained the hatred of the Jacobins. In this position Lavoisier had done many things to improve agriculture in France, and to better social and economic conditions. From the large fortune which he had inherited he had given generously in times of famine, and he had contributed much in the interest of public health. Also, he had served on several public projects including positions as director of the government powder works in 1775, member of the provincial assembly of Orleans in 1787, commissioner of weights and measures in 1790, commissary of the treasury in 1791, and member of a committee on agriculture in 1785, in which capacity he had erected a model farm at Frechines to demonstrate the advance of scientific agriculture. 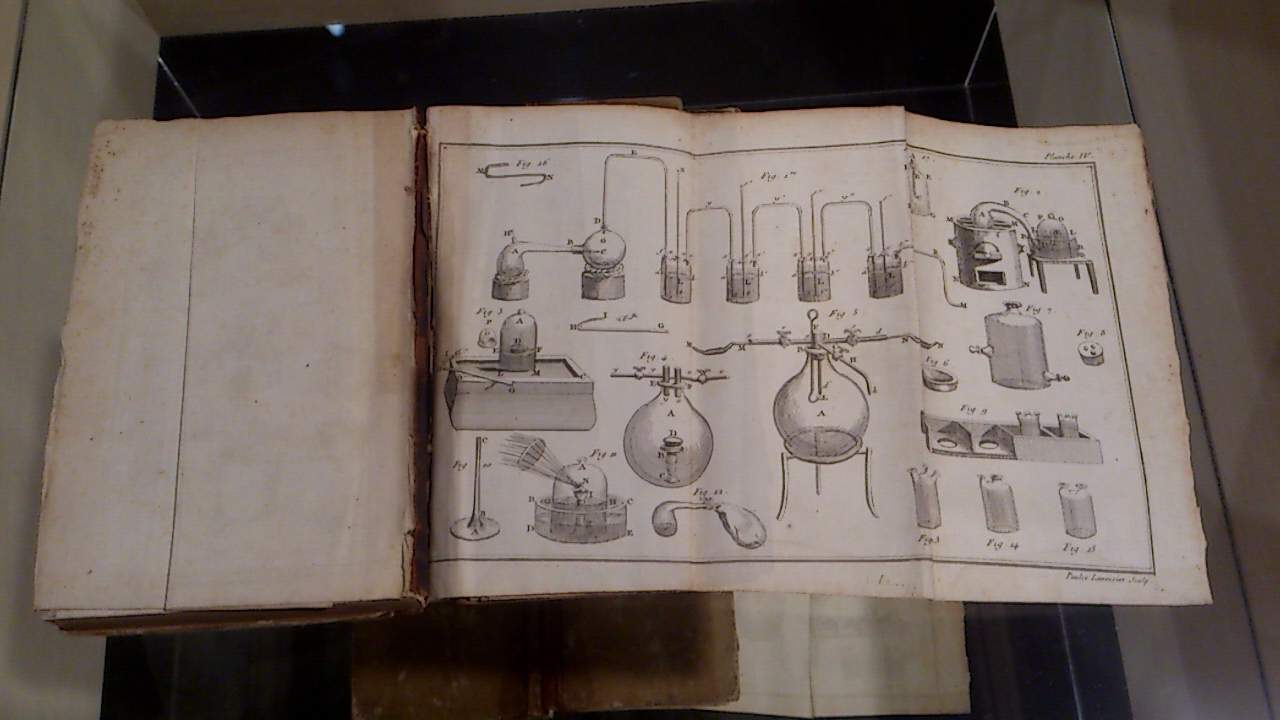 But his state activities, and especially his connections with the ferme générale, had made his suspect. In August 1792 Lavoisier was ejected from his laboratory at the Arsenal, and in November of that year the Convention arrested members of the ferme générale, who were tried on May 2, 1794. Within a few days Lavoisier, along with twenty-seven other members, was condemned to die. He pleaded for two days respite in which to write up the results of chemical experiments which he had been conducting, but his please were rejected by the judge, who cynically remarked, ‘the Republic has no need of genius’. On May 7, 1794, he was sent to the guillotine at the Place de la Revolution. As his biographer, LaGrange, so aptly wrote: ‘it took but a moment to cut off the head which a hundred years would be unable to replace’.

At the end of 1793 the arrest was decreed for all the leaders of the Ferme générale. Lavoisier tried in vain to prove that he had not collaborated with the Ferme for over three years. Relying on his popularity, and having nothing to hide, he spontaneously presented himself to the magistrate and entrusted himself to justice. However, Antoine Lavoisier was accused of treason.

According to a widespread legend, Judge Jean-Baptiste Coffinhal, president of the revolutionary court, replied to those who pointed out to him that Lavoisier was a scientist: “La République n’a pas besoin de savants” (“The republic is in no need of genius). It seems that among his accusers there was also the revolutionary and chemical amateur Jean-Paul Marat (1743-1793), to whom Lavoisier had previously rejected the application for access to the French Academy of Sciences.

The revolutionary court sentenced him to death. Lavoisier, along with his father-in-law and other colleagues, climbed into the guillotine on May 8th 1794. He was 51 years old and was buried in the Picpus Cemetery.

Lavoisier was a scientist until the end: he seems to have asked one of his servants to check whether the death on the guillotine was instantaneous or not. He tried to blink until he could, and the servant noted that the last blink of his eye was fifteen seconds after the beheading. This episode could only be an anecdote, as it does not appear that the original notes were received, however it caused a series of successive experimental checks that substantially confirmed that the brain and facial muscles remain active for some time after detachment from the body.

His name is inscribed on the Eiffel Tower on the Trocadero facade.

Lavoisier is represented on the town hall of the capital.

In 1935, the International Astronomical Union gave the name of Lavoisier to a lunar crater.

A bust of Lavoisier is installed in the Albert-Soboul museum dedicated to the French Revolution.

[4.] Scerri, Eric (2007). The Periodic Table: Its Story and Its Significance. Oxford University Press.

[5.] Smartt Bell, Madison (2005). Lavoisier in the Year One: The Birth of a New Science in an Age of Revolution. Atlas Books, W.W. Norton