Canterbury’s transformation from village to proper city happened during the Roman era when in  55 BC Julius Caesar  decided to make the city a commercial forum.

The county was firstly conquered by the Jutes, and subsequently by the Angles and Saxons. Kent became a Saxon kingdom at the end of the VI century. Even Canterbury, the main town in Kent (and one of the few Roman cities that was not abandoned following the invasions), had been assigned a Saxon name that is still preserved: Cantwarabyrig, ‘the city of the men of Kent’.

At that time, England was still predominantly pagan. The evangelisation of the country began in Canterbury, and since that moment, the city has become the spiritual capital of the island.

This had been the primary objective of the Church of Rome and, later, also that of England.

In 597, the monk Augustine landed on the coast of Kent, sent by Pope Gregory I to convert the Saxons. He was amicably received by King Aethelbert, still a pagan, although married to a princess of the Franks of the Christian religion, Bertha. On a hill, outside the Roman city walls, the queen had founded a church dedicated to St. Martin, which still exists and is considered the oldest consecrated church in England.

Shortly afterward, the king and his subjects converted to Christianity. Augustine, who had already founded a monastery, then decided to build a larger church within the city walls. The Pope gave this church the status of a cathedral, so Canterbury became the first episcopal seat of England, and the monk Augustine was its his first bishop.

At the end of the VII century, the city was recognised as the primatial seat of England. The monastery of Augustine disappeared during the Viking invasions, which devastated England in the IX and X centuries. It was rebuilt in 978 by Archbishop Dunstan, who consecrated it to its founder, who, in the meantime, had been canonised by the Church.

The cathedral was also rebuilt on two occasions: after the Danish attack of 1013 and after the Norman conquest of 1066.

In 1174, a fire almost completely destroyed the cathedral. The French architect William of Sens took care of its reconstruction, having decided to entirely rebuild the building in the Gothic style (already dominant in France).

Thus, Canterbury had the first Gothic cathedral in England, a splendid building with a double cross plan and three naves, especially notable for its length: 168 meters. This side of the cathedral also preserves the only original stained-glass windows, which survived the iconoclasm of the Anglican reform and the bombings of the Second World War.

The building was expanded more and more, year after year, thus creating the famous Canterbury Cathedral.

Canterbury Cathedral is famous because of a murder that took place within that building: Thomas Becket, the archbishop, and the former chancellor was assassinated by the king’s men due to a conspiracy. In fact, Becket refused to accept the Constitutions of Calderon in which ecclesiastical power was limited. Initially, Becket was a close friend of King Henry II before becoming archbishop. He was exiled in France for 6 years after a conflict with the sovereign. Upon his return, in the year 1170, the tensions resurfaced and it is said that the King exclaimed publicly: “Will no one rid me of this turbulent priest?”. Four knights decided to support the king and left for Canterbury. On the evening of December 29, the knights followed Becket inside the Cathedral and killed him, in a place today called ‘The Martyrdom’. Until 1220, the remains and the tomb of Becket were on the east side of the Crypt, and only two days after his killing, pilgrims began to arrive in large number at the Cathedral, especially when the legends of various miracles were spread. Thomas was canonised in 1173. In 1220, the tomb of the saint was transferred in the new Trinity Chapel, created specifically for Becket: he remained there until 1538. The assassination of Archbishop Thomas Becket made the Cathedral one of the top pilgrimage destinations in Europe. The assassination was recalled by the playwright Thomas Stearns Eliot in his theatrical masterpiece Murder in the Cathedral.

In 1540, monasteries were dissolved; the king removed the Prior and the monks. Monasteries were dissolved because of an ideological conflict between the Pope and Henry VIII: in fact, the king desired to break the sacred bond of Christian marriage in order to attain divorce from his consort Catherine of Aragon and marry Anne Boleyn. This conflict culminated in England’s separation from the Church of Rome. Such break may have also been inspired by the Evangelical Reformation which was spreading across Europe during those years.

One of the most famous tomb within the Cathedral is that of Edward the Black Prince, eldest son of King Edward III. He was young when he died, and therefore never managed to succeed his father on the throne. However, Edward was a brave and daring fighter in the wars against France. It is said that the French coined the nickname ‘Black Prince’ due to the fear he inspired in his enemies and his indomitable ardor in battle. 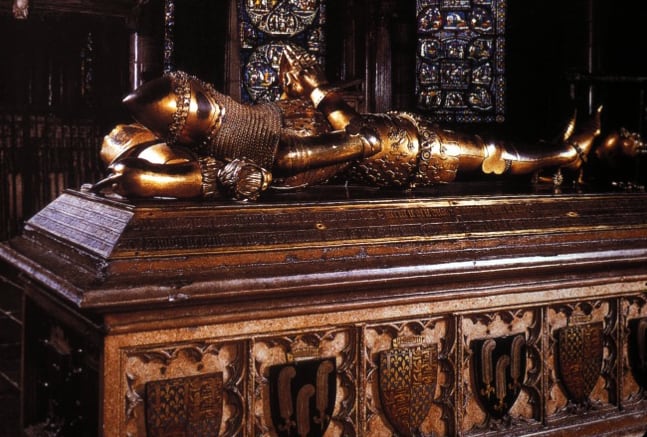 When he died, Edward asked to be buried in the Crypt.

In front of the tomb of the Black Prince other two royal figures are buried: King Henry IV and his Queen, Joan of Navarre. 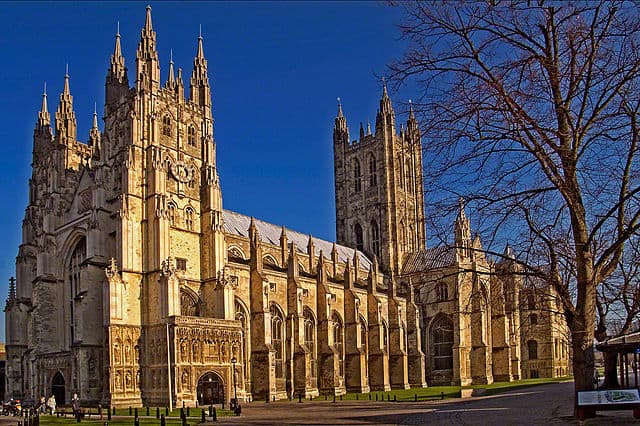 The Cathedral of Canterbury is the first important example of English Gothic architecture, which is evident in the construction of the choir, the nave, the triforium, and the clerestory.

The Cathedral is built in Caen stone (i.e. a stone mined in north-western France, near the city of Caen), which gives the building a creamy-yellowish colour. A large staircase unites the eastern and western side of the church. 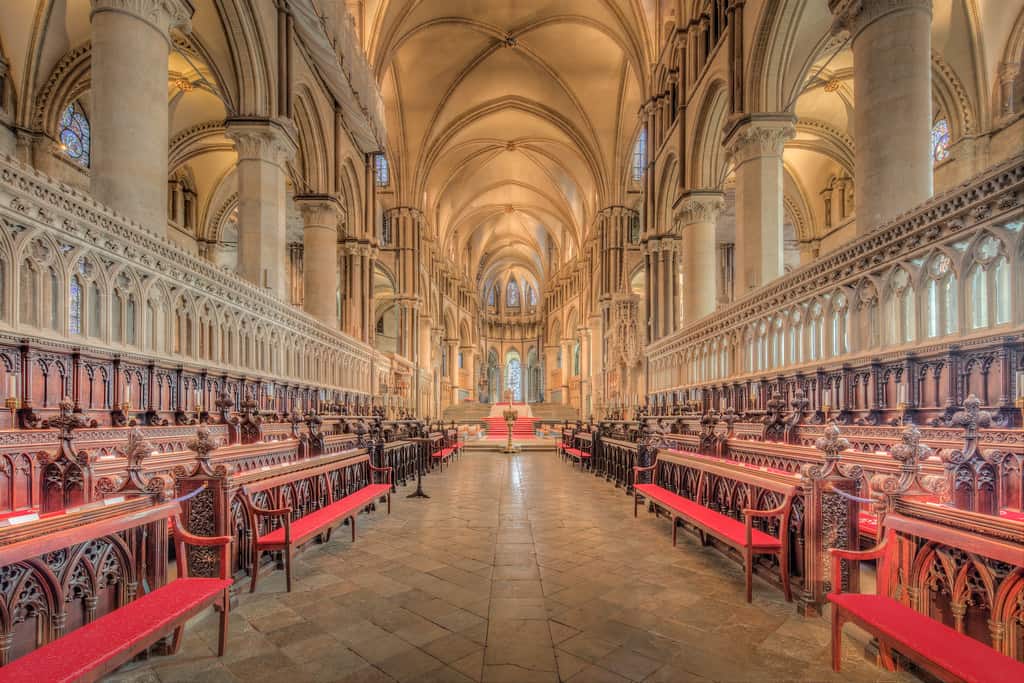 The pilgrimages to the tomb of Thomas Becket brought great prosperity to the city and its cathedral for centuries. The incredibly famous Canterbury Tales, written in the XIV century by Geoffrey Chaucer, narrate the journey of a group of pilgrims from London to the sanctuary of Thomas Becket.

In the mid-XVI century, the religious reform of Henry VIII, which involved the abolition of religious orders and the cult of saints, ended this prosperity and reduced the importance of Canterbury.

Not even the cathedral was able to escape the change: the anti-papal uprisings, especially during the English revolution of the XVII century, caused the destruction of sacred images, stained glass windows, and tombs, including that of St. Thomas Becket. The Anglican reform also implied the closure of the abbey of St. Augustine. Most of the abbey buildings were abandoned and today they are in ruins. The cloister and the chapter house still exist and they were integrated into Saint Augustine’s College, founded after the reform.