When Charles II was restored to the throne of England in 1660, John Churchill’s father obtained political office in Ireland, where he moved with his family. In 1665, John’s older sister, Arabella, became the Duchess of York’s maid of honour and, a few months later, Churchill became the page of the Duchess’ husband, James Stuart. The Duke of York’s passion for naval and military themes led him to visit the cantonments of troops frequently. These visits encouraged John Churchill’s decision to become a soldier. In 1668, Churchill sailed for the North African port of Tangier that had fallen under the control of England. He remained there for three years, gaining field experience in the constant skirmishes with the local Moors. 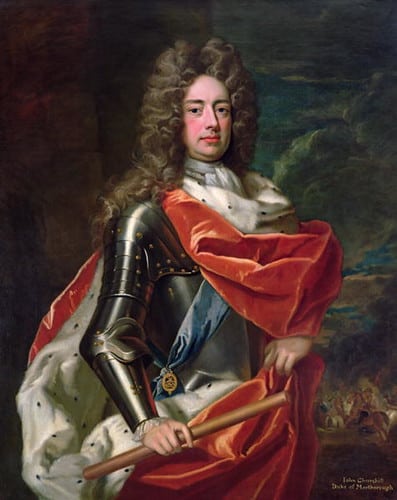 Between 1672 and 1673, he served in the Franco-Dutch War under the orders of James Stuart. In 1672, he was named a captain for his performance in the Battle of Solebay fighting the Dutch fleet and in 1673, he led the first wave of riflemen who assaulted the fortress. His behaviour earned him the recognition of the Stuart family and its allies, the Bourbons. 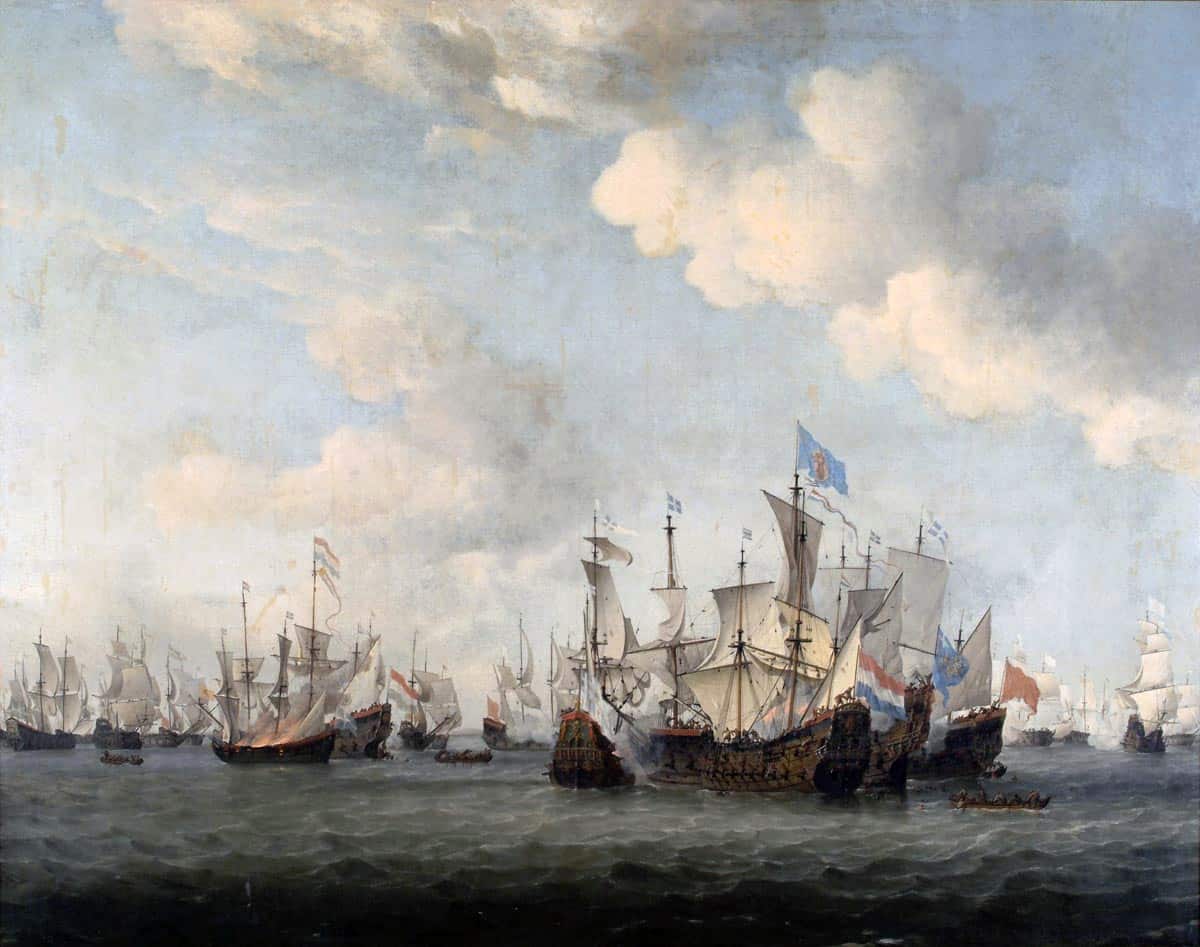 In 1673, the English Parliament decided to terminate England’s participation in the war. However, some English regiments continued to serve the King of France, including that of John Churchill who, in 1674, was appointed colonel of one of these regiments under the command of Marshal Turenne. With his regiment, he participated in the battles of Sinsheim, Entzheim and Salzbach in June of 1675, where Turenne died.

In 1675, he returned to England where he married Sarah Jennings, maid of honour of Mary of Modena, wife of his lord, Jacob of York. The Marlborough couple became a winning team. Lady Marlborough was an intimate friend and confidant of two queens, which made her a powerful ally and a fearsome enemy. Her friendship with the sovereigns decisively marked her husband’s career. His influence on Princess Anne was public and notorious, and many public figures of his time used him as a mediator to obtain favours from Anne. 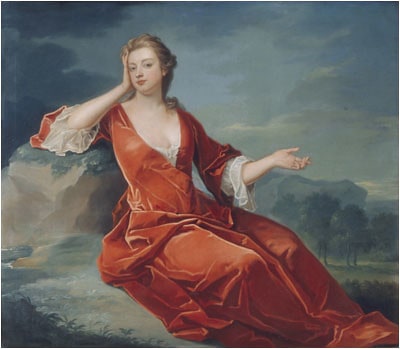 When the Duke of York became James II, King of England (the illegitimate son of Charles) in 1685, James Scott, 1st Duke of Monmouth, supported by some conspirators, claimed the Crown of England. The king granted the command of the royal troops to Louis de Duras, Earl of Feversham. Churchill felt aggrieved by this appointment since he believed he deserved it. The Duke of Monmouth’s peasant rebellion was poorly equipped and was not directed adequately. As a consequence, Monmouth was crushed in Sedgemoor on July 6, 1685. In recognition of his actions during the campaign, Churchill was granted the lucrative post of colonel. After Sedgemoor, he participated in the bloody persecutions and reprisals of those who had supported the Duke. Such persecution disgusted Churchill and led him to gradually move away from his king, patron, and friend.

The Earl of Marlborough continued in the army but was careful not to appear as excessively favourable to the increasingly uncompromising religious zeal of King James. His insistence on redirecting British institutions to Catholicism engendered an initial rejection among his subjects (mostly Protestants) which eventually led to the Glorious Revolution of 1688.

William of Orange arrived at Torbay on November 5, 1688, and from there, he moved with his troops to Exeter. The troops of James II, under the command of Lord Feversham, moved to Salisbury. In this town, Marlborough, an Anglican loyalist, left the Catholic king to join the Protestant William, leaving behind him a letter of apology to his former monarch.

In 1689, after the victory of William III and his coronation ceremony, John Churchill was named Earl of Marlborough and private adviser to the new king. That same year, the Nine Year War started, in which Louis XIV fought against the Grand Alliance.

The Earl of Marlborough served in Flanders and Ireland. However, the relations of the count and his wife with the royal family were distant. On January 20, 1692, the Earl of Nottingham, Secretary of State, ordered Marlborough to resign from all his civil and military positions, expelled him from the army and barred him from entering the court. No public explanation of the reasons that led to this decision was given.

Rumours of a French invasion grew stronger in the spring of 1692. The queen ordered the arrest of all those who supported the Jacobite party. On May 14, Marlborough was arrested and sent to the Tower of London as one of the supporters. He remained there for five weeks until it was concluded that the letters between King James and the nobles, which had been presented by Robert Young, were a forgery. Marlborough was released and rehabilitated. However, the Count continued to maintain contact with James II, which led to the “Cameret-Sur-Mer incident”.

The allies had planned an attack on Brest, the main French port in the Bay of Biscay. The French intelligence services were warned of the assault (which gave Marshal Vauban time to reinforce the defences and increase the garrison). On June 18, the army commanded by the English general Thomas Tollemache failed miserably: most of the troops were killed or captured, and Tollemache died shortly afterwards as a result of his wounds.

The War of Spanish Succession

In 1702, when James II’s daughter Anne became queen, Marlborough re-obtained his place in the court. On May 4, 1702, England formally declared war on France. Marlborough received the command of English, Dutch and German troops. As captain-general, he had to negotiate with the Dutch envoys. In spite of the frustration that the continuous negotiations implied and of the Dutch’s attitude, in 1702, he managed to capture Venlo, Roermond, Stevensweert and Liege in the Spanish Netherlands. Thanks to these accomplishments, the queen granted him the title of Duke in December.

At the beginning of 1703, his son died, plunging him into depression and despair. In March, however, he returned to The Hague. Marshal François de Neufville de Villeroy replaced Marshal Boufflers as commander in the Spanish Netherlands but Marlborough continued conquering cities and took Bonn, Huy and Limburg. Only the reluctance of the Dutch allies prevented him from facing the French troops in Flanders in a decisive battle.

In 1704, the Blenheim campaign took place. That year, the Austrian empire of Leopold I, pressed on its western front by the French and the Bavarians, and on its eastern front by the Hungarian rebels, was about to abandon the war. To continue the war with the support of Austria, Marlborough had to send reinforcements to the Danube. He moved the English troops to the Moselle (a plan approved by The Hague) but once there, he abandoned the Dutch troops and continued alone with the Austrians in southern Germany. After covering approximately 250 miles in five weeks, on July 2, after the Battle of Schellenberg, Marlborough created a safe passage for supplies across the Danube. On August 13, together with the Austrian troops of Prince Eugene of Savoy, the English defeated the Franco-Bavarian troops at Blenheim. The campaign continued with the capture of Landau in der Pfalz on the Rhine, Trier, and Trarbach on the Moselle.

In 1706, the French generals achieved some victories in Alsace and Italy by stopping the advance of the Allies. On May 23, 1706, near the town of Ramillies in Wallonia, Marlborough decisively defeated the Bourbon troops commanded by Marshal Villeroy. By the end of this campaign, he had conquered almost all the Spanish Netherlands, while on the Italian front, Prince Eugene of Savoy defeated the French in Turin by expelling them from Valtellina.

In 1707, the French armies under the command of Marshal Tessé stopped the advance of Prince Eugene of Savoy who had crossed the river Var and was about to occupy Toulon on August 22. Meanwhile, in Spain, the Franco-Spanish troops overwhelmingly defeated the allies in Almansa on April 25, and subsequently occupied Valencia, Alcoy, Denia, Zaragoza, Játiva (which was burned down), and Lérida. Marlborough was forced to return to England and explain his inability to win the war. The Parliament demanded the transfer of 20,000 men from the Spanish Netherlands to Spain to try to turn the situation around.

In 1708, after losing Ghent and Brugge to the French, the Duke of Marlborough succeeded in defeating Marshal Vendôme at the Battle of Oudenaarde on July 11 and, on October 22, occupied Lille, the most powerful fortification on the continent. 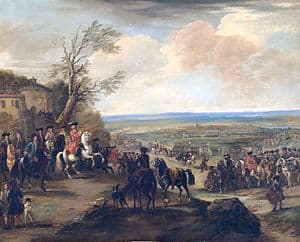 In 1709, after preventing Marshal Villars from taking Tournai on September 3, the most important confrontation of the war took place in Malplaquet on September 11. The allies won the battle but suffered twice as many casualties as the French. His opponents therefore accused Marlborough of trying to prolong the war to gain fame and money.

In 1711, he was accused of misappropriation of public funds. Due to these accusation, he was dismissed as commander-in-chief and stripped of public office. He lived abroad in a self-imposed exile until he was restored. He died on June 16, 1722, in Windsor.