Nasser was born in Alexandria of Egypt on January 15, 1918. His father, Abd el Nasser Husein, a postman, came from a humble background. His is mother Fahima Mohammad Hammad, died already in 1926. During his youth, Nasser was already politically engaged against foreign influences on Egyptian politics, especially when the British started to intervene with the politics of his country. 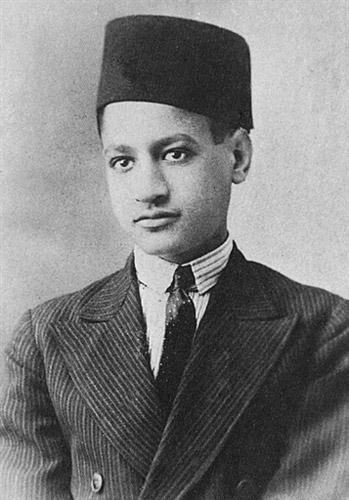 As a student, he took part in the anti-British demonstrations organised in 1923 by the ultranationalist Young Egyptian Society. In 1935 he was remanded for subversive activity.

Nasser tried to apply to the military school several times. However, it was only thanks to the support of an influential person, that in 1936 he was able to attend the Military Academy in Cairo. He completed his studies in 1940.

Nasser vehemently rejected the British influence in Egypt (which had also extended to the Egyptian armed forces): In February 1942, British tanks surrounded the royal palace and forced King Faruq I, to replace the government with a pro-British one. Many Egyptian officers then left the army since they had failed to protect their own king. Nasser was not one of those officers since he believed that such a king deserved no protection and that he should be overthrown.

After staying in Sudan, in 1943 he began a job as a teacher at the Military Academy. Here, he participated in the founding of the illegal Free Officers Movement. In 1947 he attended the General Staff School. From 1948 to 1949 he took part as a captain in the Palestine War. As a member of the Egyptian delegation, he participated in the ceasefire negotiations with Israel on the Greek island of Rhodes. Nasser’s role models were the Prophet Muhammad, George Washington, Voltaire, and Gandhi. In 1951 he was an instructor in a school in Cairo.

An event that happened during those years, reveals the attitude of the young Nasser towards the ruling class of his country: whilst Nasser was in Alexandria, he saw a British police officer and an Arab civilian arguing. Nasser first beat up the policeman and then asked the civilian what was the cause of their dispute.

The beginning of his Political Activity

During the Second World War Nasser worked with German and Italian agents and planned together with other Egyptian military groups a coup against the British. Nasser cooperated with the Axis powers not only because of his anti-colonialist ideologies but also because of his hostility towards the Jews.

In 1949, Nasser founded the Free Officers Movement. All the nine (later on, eleven) members were too young, and the General Muhammad Nagib was elected as the highest-ranking officer within the movement. 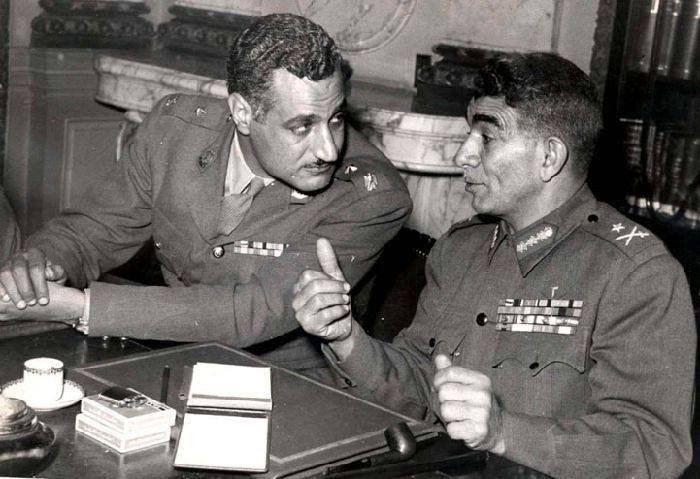 The power struggle with Nagib

Under the leadership of Nagib and Nasser, the Free Officers overthrew King Faruk I on the night of July 22-23, 1952. General Nagib became President, Nasser became Prime Minister and Minister of the Interior. In the following years, however, Nasser and Nagib increasingly came into conflict over the future of Egypt.

Nagib advocated a return of the army to the barracks and the establishment of a democratic community. On the other hand, Nasser supported the continuation of military rule and a social transformation. Also, he intended to suppress any political opposition (such as the Communists). On February 24, 1954, Nasser Nagib deposed him and placed him under house arrest. In the same year, he became chairman of the Revolutionary Command Council. When Nagib fell, the ex-president found three million dollars in cash. Nasser suspected that the money came from US Secretary of State John Foster Dulles. The brother of the then CIA chief, Allen Dulles, had negotiated a few months earlier with Nagib. Nasser used the money to build the Cairo TV tower.

At the beginning of his reign, Nasser mainly represented the idea of Egyptian nationalism. He also adopted a more conciliatory attitude towards the State of Israel, which he considered a product of successful liberation from colonial rule. After taking power, he increasingly devoted himself to pan-Arabism. Nasser himself gave a reason for his change of heart to a close friend in 1953: he claimed that in the past, he did not believe in either the Arabs or Arabism. He stated that every time someone talked to him about Arabs, he laughed. However, when he subsequently realised the whole potential of the Arab states, he changed his mind. In 1954, Nasser published The Philosophy of the Revolution. Muhammad Heikal, the editor-in-chief of the newspaper Al-Ahram, was the ghostwriter of the book. 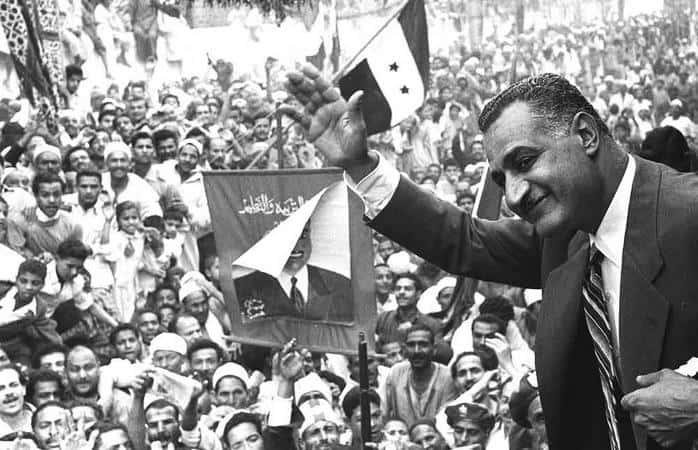 Nevertheless, Nasser also negotiated with Israel. However, his talks with the Prime Minister Moshe Sharet concerning a peace agreement that included the Palestinians were sabotaged by David Ben-Gurion and by the weapons that West Germany had delivered to Israel.

As a result of his increased emphasis on Arab nationalism, Nasser also advocated a more aggressive attitude towards Israel, and eventually rejected the idea of recognising it as a state. Nasser used radio stations to propagate his ideology in Africa and especially in the Arab world. For this reason, he employed Islamic rhetoric. His opinions on pan-Arabism helped Nasser to stand out ideologically against his political opponents (Nagib and the Muslim Brotherhood).

After attending the 1955 Bandung Conference, Nasser approached the neutralist positions of Yugoslav President Josip Broz Tito and Indian Prime Minister Jawaharlal Nehru, and six years later he founded with them the Non-Aligned Movement (NAM), establishing strong ties between countries of the third world, in an attempt to find an alternative to the “bipolar” logic produced by the Cold War.

Nasser’s policies intended to promote solidarity among all the Arab states: in January 1958, in order to strengthen his security, Syria claimed to merge with Egypt, thus giving rise to the United Arab Republic (RAU). Soon, a part of Yemen joined the RAU as well. The part of Yemen that joined Nasser, was the part that had rebelled against Imam Ya eyā and his successor Muhammad al-Badr.

Therefore, Egypt decided to intervene militarily in Yemen. However, his intervention turned out to be a serious political mistake for Nasser, as it forced him to engage his army in a fatiguing five-year conflict.

However, Nasser’s Egypt played a leading role in the Arab League, since the conflict in Israel helped him achieve a greater economic and political unity in other Arab countries. The creation of the Palestine Liberation Organisation (PLO) was in fact largely favoured by the Egyptian president.

However, in September 1961, Syria claimed to want to regain its full independence due to the excessive imbalance of power within the union. Egypt, did not forbid Syria from leaving the RAU.

In the run-up to the Six-Day War, Nasser had ordered various actions against Israel such as the closure of the Gulf of Aqaba, and the expulsion of UN troops in the Sinai Peninsula. Thus, he allegedly mobilised the Egyptian army. Israel’s pre-emptive attack and the devastating defeat inflicted by the Israeli army on the Egyptian forces in the air and on land resulted in Nasser’s resignation on June 9, 1967. However, mass demonstrations in Egypt and in the Arab world prompted him to remain in office. Yet, Nasser had lost his high reputation among the Egyptian people. With the defeat of 1967, Arab nationalism began to decline. 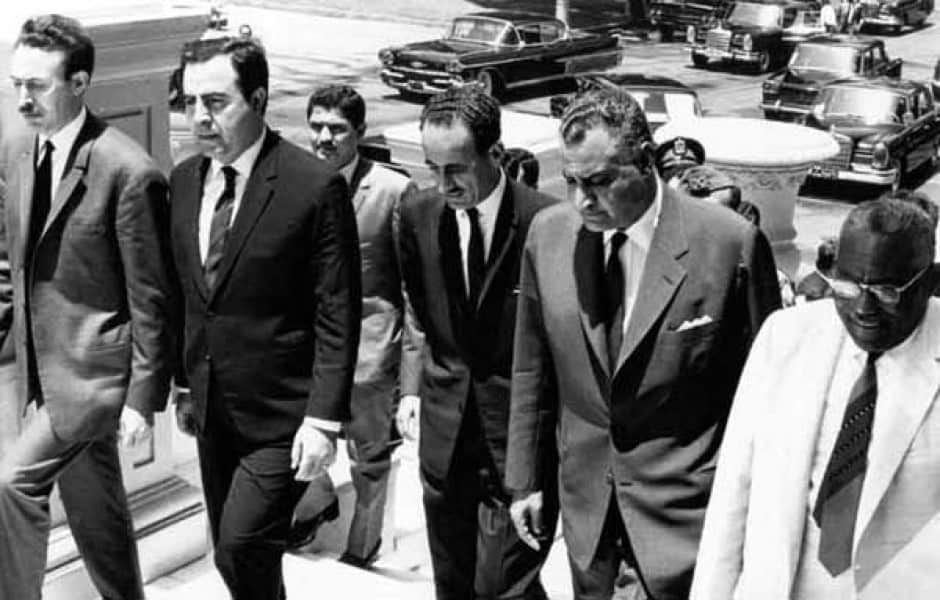 During the war of attrition (1968-1970) Nasser was partially able to restore the self-confidence of the Egyptian troops. As Israel intensified the bombardment of Egyptian cities in the year 1969, Nasser was forced to seek assistance from the Soviets. The difficult war situation and the frequent Israeli air raids on Egyptian cities had already badly affected his health at this time.

On September 28, 1970, Gamal Abdel Nasser died of a heart attack immediately after he had brokered a truce between Jordans and Palestinians. When Nasser died, Anwar al-Sadat became the new President of Egypt. His funeral on October 1, 1970, was attended by five million people. He was buried in the Abdel Nasser Mosque in Cairo.

Nasser had two daughters (Huda and Mona) and three sons (Khaled, Abdul Hamid, and Hakim Amer). Khaled was sentenced to death in November 1988 for supporting the underground group Egypt’s Revolution. 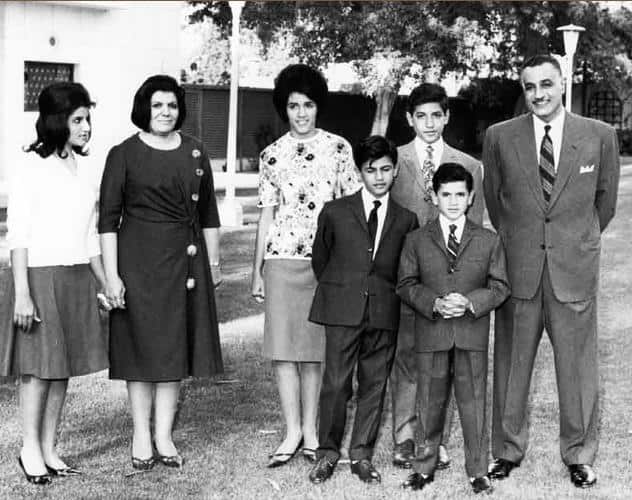