George Villiers was the son of Sir George Villiers and of Mary, daughter of Anthony Beaumont of Glenfield. At a young age, he was sent to France to be educated for court life. Villiers started to ascend during the reign of James I Stuart, who made him Lord Admiral (1619), later Viscount, Count, Marquis and finally, in 1623, Duke of Buckingham. He married Katherine Manners, daughter of Frances Manners, 6th Earl of Rutland, on August 16, 1620. 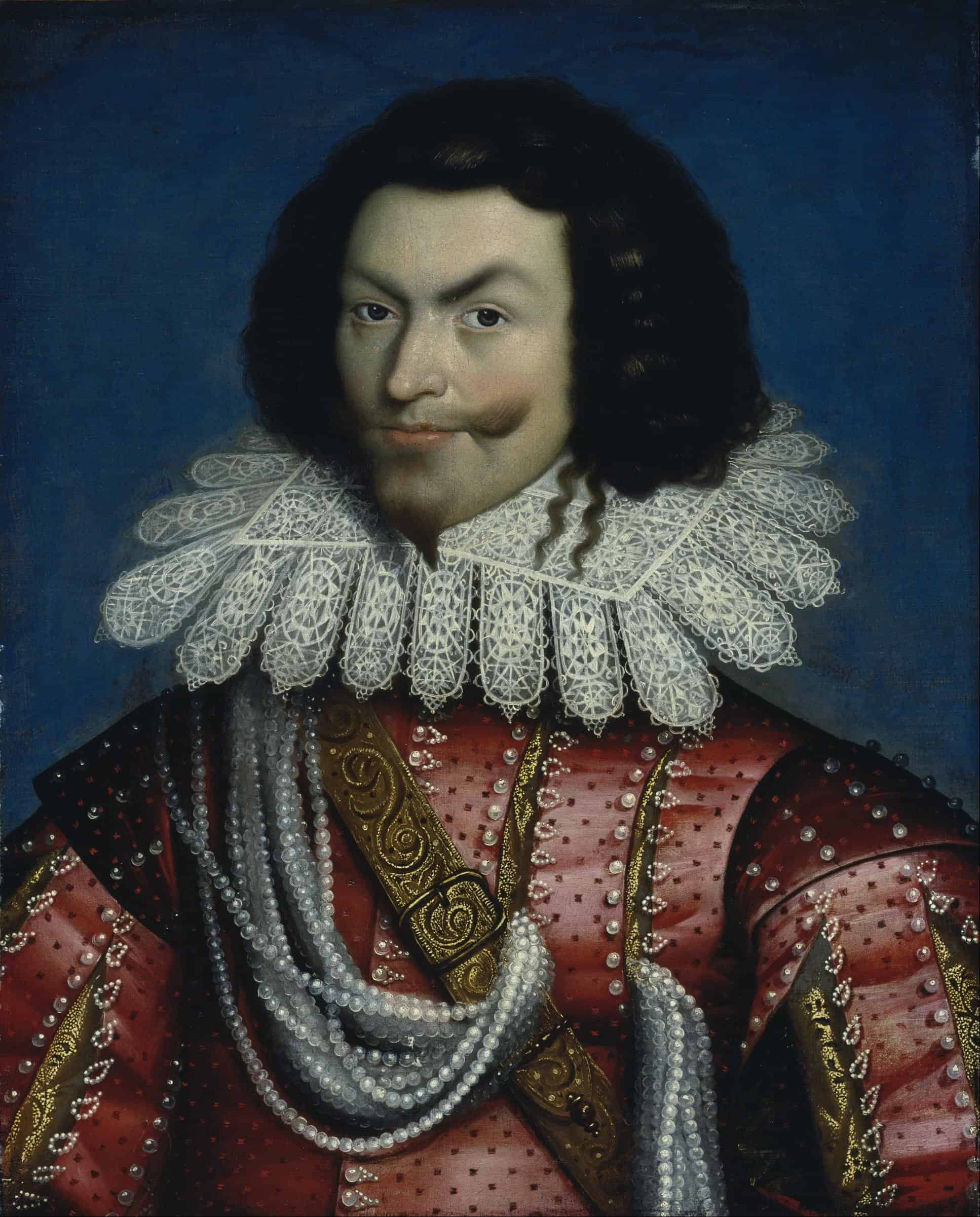 In 1623, Villiers worked to make an alliance with Spain, favouring the marriage between the Infanta of Spain Maria Anna, daughter of Philip III, and Prince Charles, who he accompanied to Madrid for this purpose. In 1625, he completed a triple alliance with Denmark and the Netherlands.

In May 1626, after a disastrous campaign conducted against the Spaniards in Cadiz, Parliament tried to get rid of him. The king, in order to prevent the expulsion of his protégé, dissolved Parliament in June.

In 1627, when the war against France broke out, Villers commanded a naval and land expedition in order to support the Huguenots of La Rochelle but was defeated after a four-month campaign. Upon his return to England, Parliament tried to encourage the king to remove the Duke, yet, the king intervened in his favour once again. The acceptance of the Petition of Rights in 1628 led to the condemnation of the excessive power of George Villiers. He was also deemed responsible for the failures that the British government had endured throughout those years.

George Villiers was assassinated on August 23, 1628, by John Felton – a fanatical sailor who believed that the death of the Duke of Buckingham would serve the good of the country. Villiers had one son, George, who became his heir.

The Duke’s monumental tomb is located in Westminster Abbey.

According to the wishes of the king, George Villiers married the daughter of the 4th Duke of Rutland, Lady Katherine Manners, on May 16, 1620. Both Lady Katherine and her father raised objections to the wedding, but had to accept the king’s request after Katherine had stayed one night under the same roof as Villiers. Although nothing compromising happened, Lady Katherine was convinced that marrying him was the most prudent thing she could do. The artist Van Dyck, portrayed Villiers and Lady Katherine Manners’ marriage, in which they appear as Venus and Adonis. 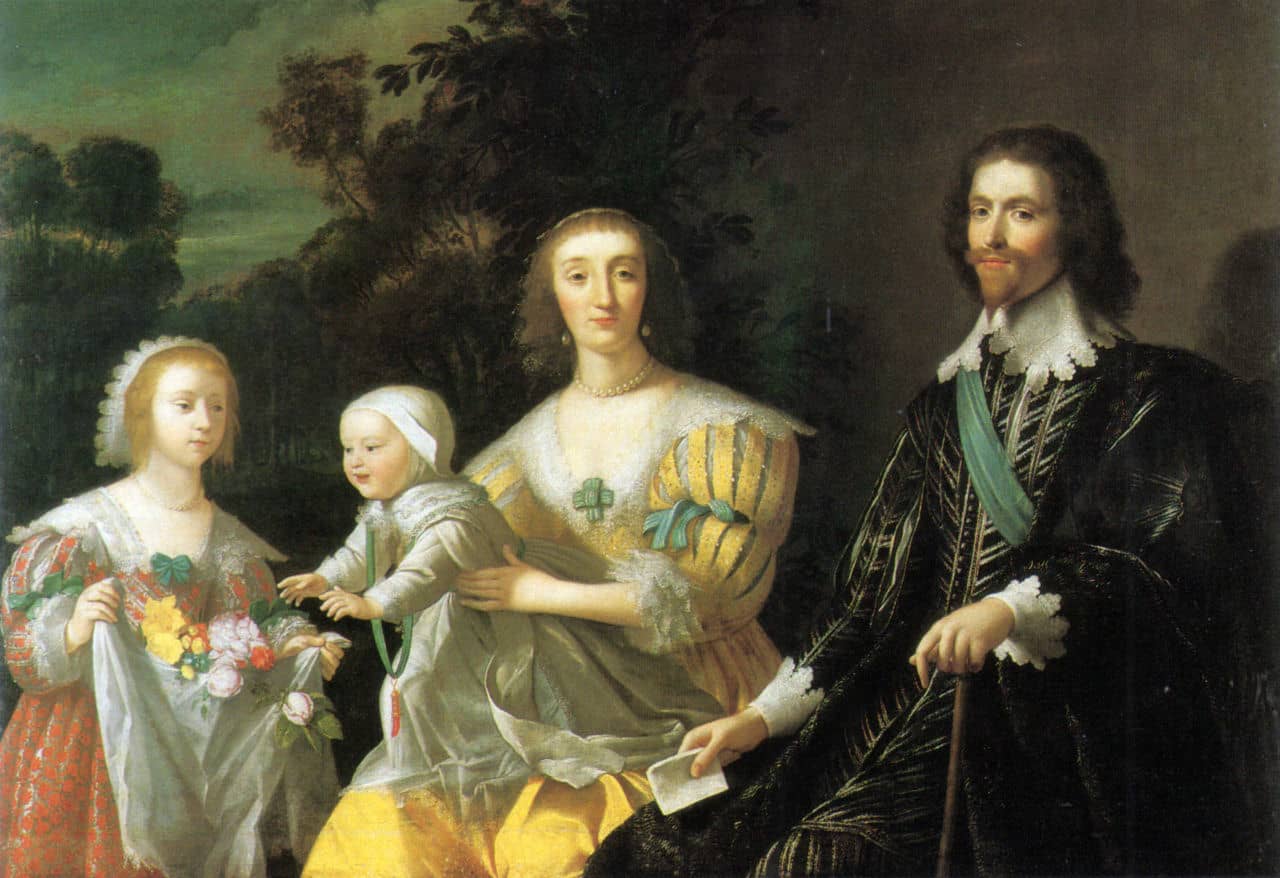 In 1623, Villiers accompanied Charles, Prince of Wales, to Spain in order to negotiate his marriage with the Infanta Maria Anna, Philip III’s youngest daughter. This trip allowed him to strengthen the relationship and trust with the future King Charles I. 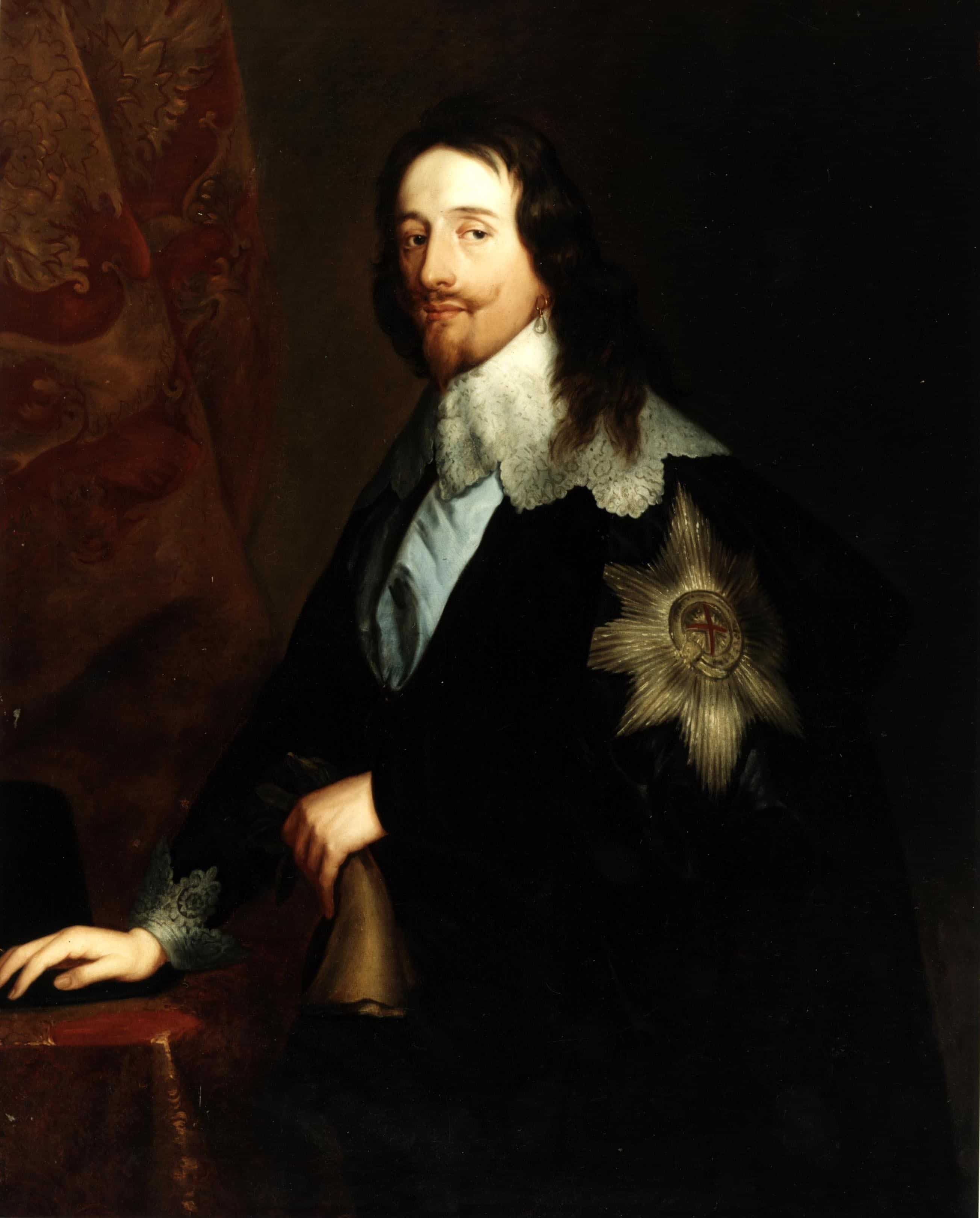 In Madrid, King Philip IV gave them many Spanish horses, which later contributed to the emergence of purebreds in England.

It is said that Prince Charles was genuinely infatuated with the Infanta. However, Villiers overstepped the court’s boundaries when he climbed up a wall to see her. When this happened, the Infanta fled in terror.

The Spanish ambassador asked Parliament to execute Villiers for his behaviour in Madrid but Buckingham received support when calling for war against Spain upon his return.

In 1624, he was then sent to France, along with the count of Holland, to request the hand of the princess Henrietta Maria of France, daughter of Henry IV, on behalf of the King of England. However, the bride’s Catholic religion provoked the English population’s disapproval. During this diplomatic mission in France, Villiers courted Queen Anne of Austria, which resulted in his expulsion and causing animosity from Louis XIII and Richelieu.

He came to the aid of the rebellious Protestants, and besieged Saint-Martin-de-Ré in 1627 against the Count of Toiras. His assaults on La Rochelle and the island of Ré failed. Due to his defeat, he lost more than 4,000 men out of a total of 7,000.

However, his luck improved when the Prince of Wales was crowned Charles I of England. Charles I was fascinated and attracted (perhaps platonically) towards Villiers and kept him in office.

Buckingham organised an expedition against Spain with the intention of seizing the treasure fleet. An Anglo-Dutch fleet under the command of Edward Cecil attacked the Spanish city of Cádiz. The expedition failed because the English troops were poorly equipped and underprepared, which allowed Spain to resist the attack.

Buckingham then negotiated with the French regent, Cardinal Richelieu. The English ships were supposed to aid Richelieu in his struggle against the Huguenots (i.e. French Protestants) in exchange for French aid against Spain, which occupied the Palatinate. Such aid never materialised and the English Parliament was scandalised by the idea of English Protestants fighting against French Protestants.

Villiers believed that he had failed in his attempt because Richelieu had purposely betrayed him. As a consequence, Villiers organised a conspiracy against him that included the cardinal’s enemies and the Huguenots.

War with Austria, France and Spain

When the parliament tried to blame Villiers for the failure of the Cadiz expedition, the Duke of Buckingham declared war on France, putting England at war with the Bourbons of France and the Habsburgs of Spain and Austria – two of the most important dynasties in Europe.

Villiers rapidly lost his popularity and began to be blamed for the Protestant’s failure in the battle of Dessau under the command of Ernest of Mansfeld.

While preparing a second expedition in Portsmouth on August 23, 1628, the army officer John Felton murdered Villiers by stabbing him in the Greyhound Pub, a tavern in that city. Felton was hanged in November, and Villiers was buried in Westminster Abbey. He was the first person not belonging to the royal family to be buried in Westminster. His tomb is next to King James I.

George Villiers in the literature

Overall, the Duke of Buckingham was a very controversial historical figure. George Villiers is one of the central characters in Alexandre Dumas’s novel The Three Musketeers, where he is called the Duke of Buckingham or simply Buckingham. In the text it is supposed that he entertained a platonic love affair with the queen of France, Anne of Austria, wife of the French King Louis XIII. It is also imagined that Felton, the sailor who actually killed him, had been convinced by Milady, a wicked woman in the service of Cardinal Richelieu. 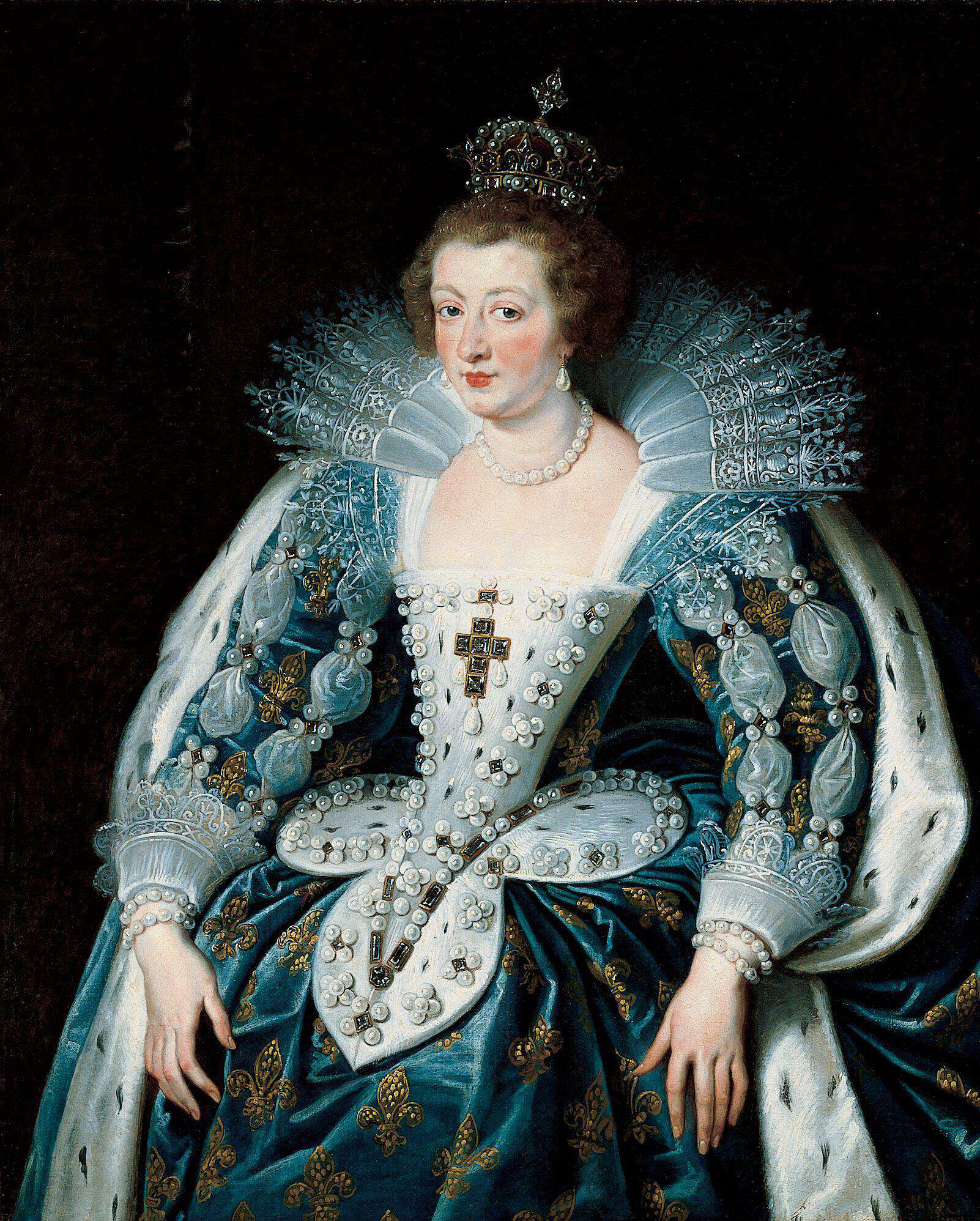 As his many portraits suggest, Villiers was well-known for his physical attractiveness and elegance.

There are no official records that substantiate the alleged relationship of the Duke and the Queen.

The French writer Alexandre Dumas describes him in paradoxically positive terms in The Three Musketeers. The English writer and historian Charles Dickens, by contrast, does not disguise a total rejection of the Duke in his book A Child’s History of England. According to Dickens, when the English King Charles I commissioned the Duke of Buckingham (“that insolent nouveau-riche”) to escort the royal bride, Princess Henrietta Maria from Paris to England, Buckingham “with his usual audacity” seduced the Queen of France and Anne of Austria, which caused an extremely serious diplomatic conflict that Cardinal Richelieu, minister of the King of France Louis XIII, took advantage of. Later, “that stinking Buckingham, to gratify his wounded vanity,” dragged England into a war with France and Spain.