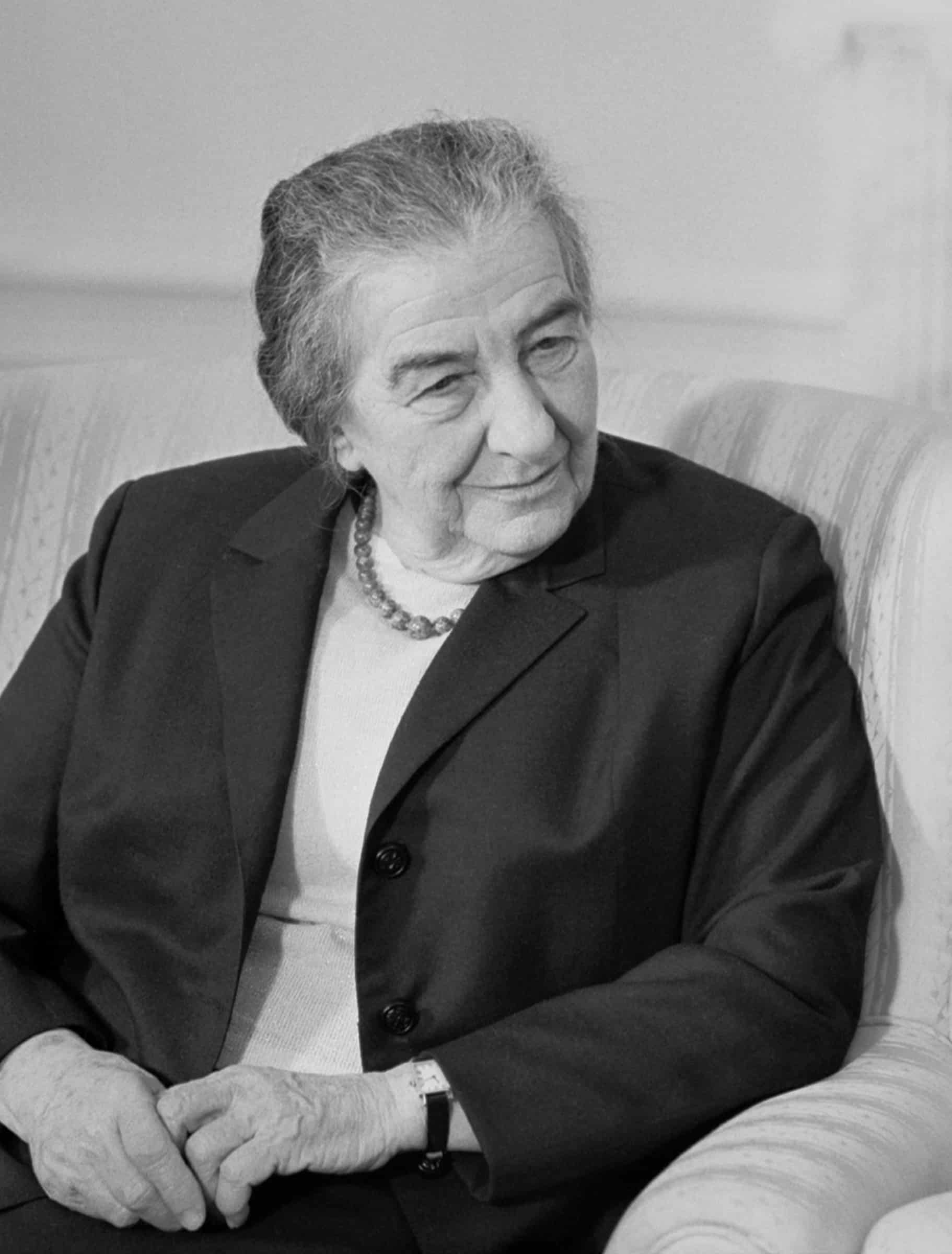 Golda Mabovič was born in Kiev (in the Russian Empire) in 1898, in an extremely modest family. Her father was a carpenter and her mother raised Golda, her two sisters, Sheyna and Clara, and five other brothers who died before reaching adolescence due to the extreme conditions of poverty in which the family was living (Jewish Virtual Library).

During her early childhood, she witnessed episodes of anti-Semitism. The experience of racism and persecution will influence Golda Meir’s future political choices. In 1903 her father emigrated to the United States, with the intention of being joined by the rest of the family once settled down. Therefore, Golda moved to Pinsk, in present-day Belarus, with her mother and sisters. In that same year, a particularly violent pogrom sparked protests within the Russian Jewish community. Although she was only five years old and her family was against it, Golda Meir wanted to participate in the protest’s demonstrations.

She reached her father in Milwaukee (Wisconsin) in 1906, and she completed her first school cycle in the United States, at the Fourth Street Grade School (now renamed the Golda Meir School in her honour). Although she did not speak English, since her early school years, Meir demonstrated strong leadership skills, promoting many initiatives, including fundraising for the purchase of books and text for less well-off comrades.

After arguing with her parents, who wanted to force her to leave her studies as a teacher in order to get married, at the age of 14 Golda Meir moved to Denver, Colorado, at her sister’s house. Her sister and her husband organised cultural debates, and thanks to those events, Meir came into contact with the literary world, feminism and the Zionist ideology. She wrote in her autobiography that Denver was a real turning point because her real education began there. In her opinion, life really opened up in Denver (Meir 1976).

Here, in 1913, Meir met Morris Meyerson, and she married him on December 24, 1917, at the age of 19, immediately after obtaining American citizenship.

After graduating, in 1916 she enrolled at university, the Milwaukee Normal School, and subsequently became a teacher. Golda taught at a Yiddish school in Milwaukee. She participated and organised protest marches, and became a member of the Labor Zionist organisation Poalei Zion.

In the following two years, her political commitment in Jewish and Zionist associations was very intense and allowed her to travel across the United States. In 1918, she participated in the Congress of American Jews as a delegate of Milwaukee. Golda was the youngest delegate of the meeting, and this marked the beginning of her political career (Meir 1976).

Political Career and the birth of Israel

Despite her husband’s reservations, in 1921, the couple left America to move to Palestine along with her sister Sheyna and her daughter. The group reached Tel Aviv. Upon their arrival in Jewish Palestine, the Meyerson joined a kibbutz, despite the initial distrust of the other members due to the couple’s nationality (in fact, both were American citizens). It was precisely within the kibbutz that Meir had her first real political formation. After three years in the kibbutz, in 1924, the family, following the birth of their first child, Menahem, and Morris’s illness, decided to move to Jerusalem. Here, Meir found employment as treasurer at the General Office of the Federation of Workers of the Territories of Israel, one of the most important Israeli economic organisations.

In 1928, she became the secretary of the Women’s Working Council, while in 1930 she joined the Mapai Party (the Israeli workers’ party) which later merged with the Labor Party. In 1946, Golda was at the head of the political department of the Jewish Agency for Palestine. Meanwhile, she began to actively engage in Zionist political activities, becoming a delegate of the World Zionist Organisation and organising the illegal immigration of Jewish refugees from Europe to Palestine during World War II. 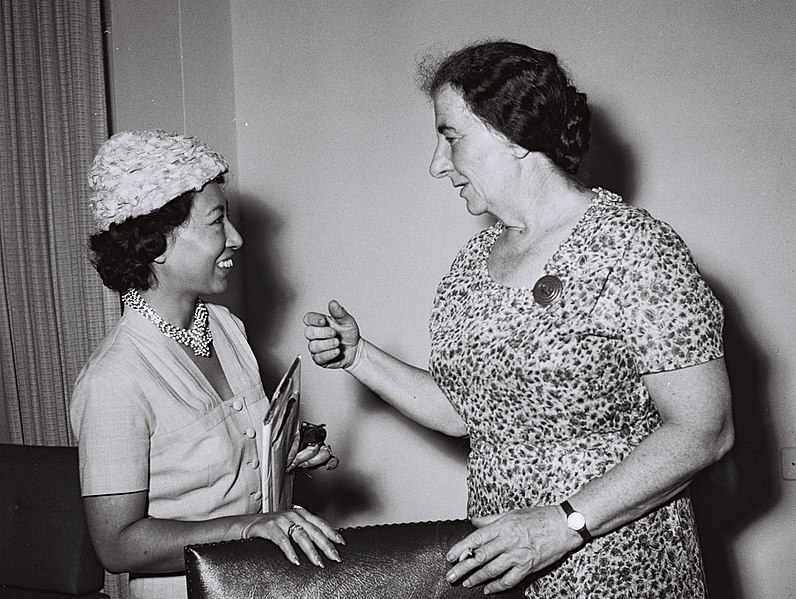 At the end of the Second World War, Meir was mainly concerned with the institutionalisation of the State of Israel in the Holy Land. At the beginning of 1948, she returned to the United States in order to raise funds for Palestine, so when Israel’s independence was proclaimed, on May 14, 1948, Golda Meir became a member of the Provisional Council of State. She was one of the signatories of the declaration of independence of Israel, one of two women out of twenty-four signatories. Later, Meir declared: “After I signed I started crying. When I studied American history and the signing of the declaration of independence at school, I couldn’t imagine that they were real people doing something real. And then I was just sitting there signing a declaration of independence “ (Meir 1976).

Political role after the proclamation of the State of Israel

After the proclamation of the State of Israel, and the end of the hostilities of the first Arab Israeli conflict, Golda Meir became the first ambassador for the newly formed State of Israel in Moscow.

In 1949 she became part of the Israeli parliament. The then Prime Minister David Ben-Gurion proposed her as Deputy Prime Minister, a role which Meir declined, preferring to opt for the ministry of labour. Despite her experience and political commitment shown during the years of the kibbutz, Golda Meir had to overcome the hostility of many Laborists who considered it risky to have a woman in the ministry of labour. Despite criticism, Meir worked hard to resolve social security problems, particularly, the allocation of homes and jobs. The following year, Morris Meyerson died of a heart attack. Although the two lived apart for years, Meir did not fail to travel to Tel Aviv for her husband’s funeral.

In 1955, Meir was a candidate for the position of mayor of Tel Aviv. However, she was not elected. At that time, Golda Jewishised her surname in Meir which signifies “enlightened”. Golda was reluctant to make such a change to her surname and decided to keep it as similar as possible to that of her deceased husband, Meyerson.

In 1956, Golda Meir was appointed foreign minister and faced the Suez crisis.

In a correspondence between Meir and the Polish political authorities, the future Israeli prime minister advanced the possibility of not allowing entry into Israel to elderly or handicapped Jews.

Previously, selections were made on the basis of the immigrants’ professions. With the Law of Return (1950), Israel opened its borders to all the Jews of the world, guaranteeing them citizenship. However, in 1951, the law underwent some changes, favouring Jews who were at risk in their country of origin or who could pay for their own travel expenses (preferably if they were young, healthy and with a commercial activity) (Adwan et al. 2012). 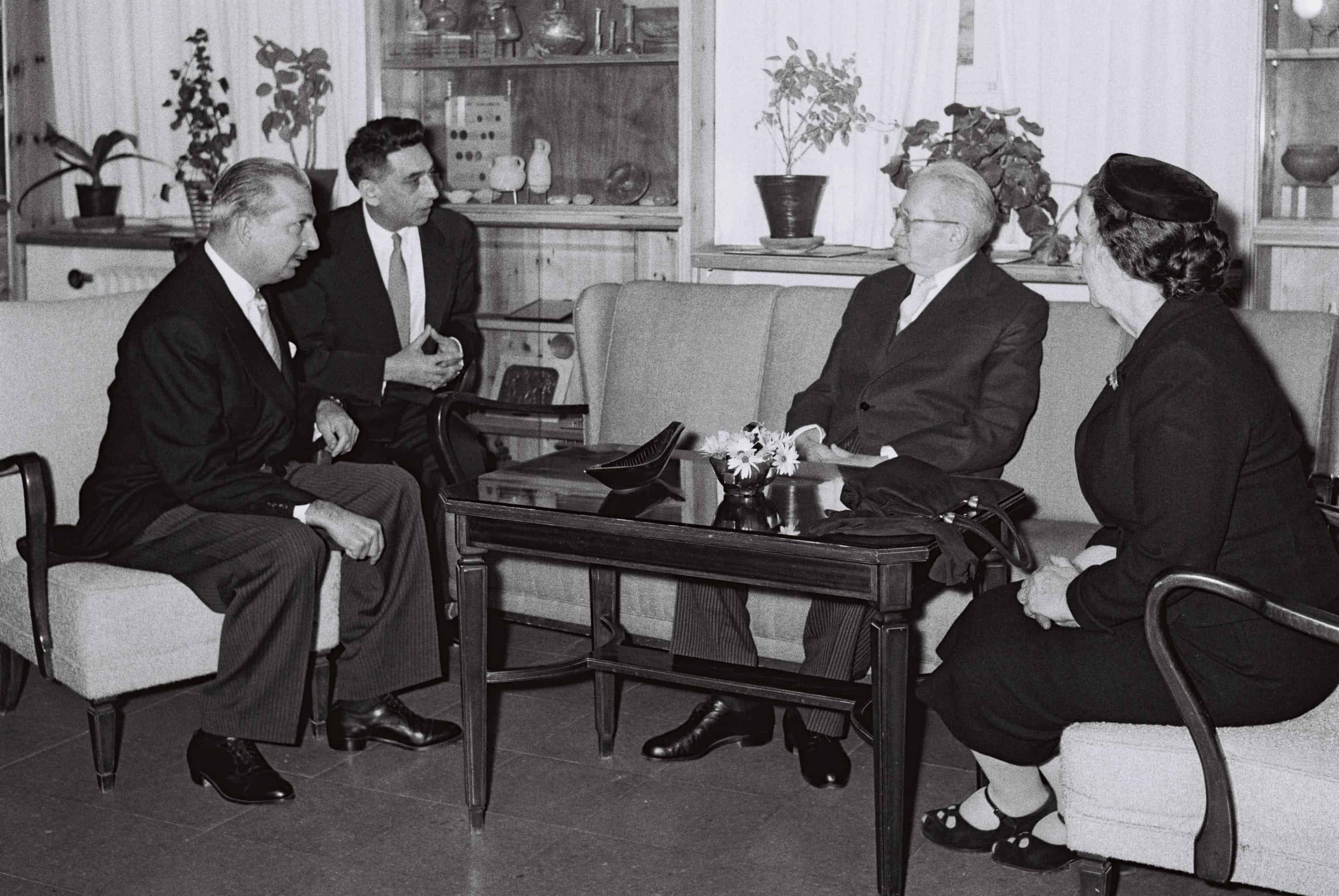 Meir’s Retreat and her return to the political scenes

In 1963 she was diagnosed with lymphoma and Meir thought about retiring from the political scene.

In 1966, tired and sick, she resigned as a foreign minister; however, she maintained her seat at the Knesset. Yet, her retirement was short-lived: a few months later, she became the general secretary of the party and united the three Labor groups, the Mapai party, the Ahdut Ha’Avodah and the Rafi Party, in one single Labor Party.

Meir decided once again to abandon the political scene. However, the sudden death of Levi Eshkol and the search for a successor risked causing a split within the newly formed Labor party. Meir was elected president of the Labor Party, and on March 17, 1969, she became Prime Minister of Israel. Golda Meir, the fourth person to hold the position of prime minister, remained in office for five years.

Years as Prime Minister and Death

Golda Meir was the first woman to hold the main political office of the State of Israel. She decided to maintain the policies of Eshkol’s government.

As a prime minister, Meir formed excellent relations with the United States, in particular with President Nixon (despite mutual personal antipathy) and with the American Jewish community, the largest in the world. She strongly encouraged the immigration of Jews to the land of Israel.

It was in 1972 that Meir’s government had to face the biggest crisis: a Palestinian command called Black September took as hostages the Israeli athletes playing at the Olympic Games in Munich, demanding the release of Palestinian political prisoners. The blackmail had no effect on Meir, who maintained her firmness. 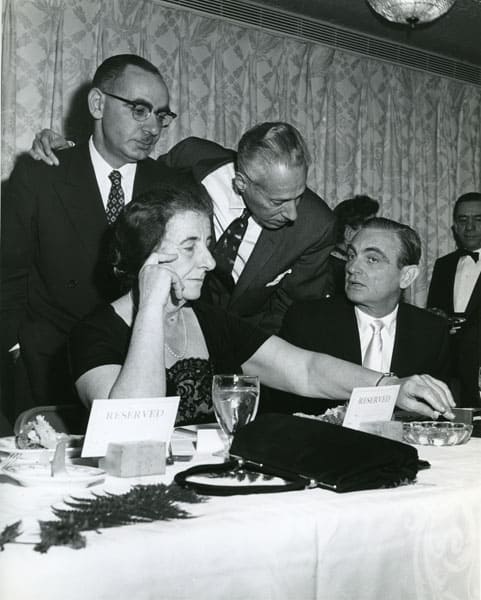 Do to the German federal police’s improvised blitz, all the hostages and five of the eight terrorists lost their lives. Such an event is known as the Munich Massacre. Following the massacre, Meir’s government secretly begun a repressive policy aimed at all the groups suspected of being in contact with Black September. Operation Wrath of God consists in the killing of those deemed responsible for the Munich Massacre.

In 1973, Israel was attacked by Egypt and Syria, and before Israel won the Yom Kippur war, it lost a great number of human lives. Meir had not started the war: in fact, if Israel had attacked Egypt and Syria, then the country would have not been entitled to the United States’ decisive aid.

In 1974, however, the political chaos following the Yom Kippur war did not seem to abate, and Golda, at 76 years old, decided to retire. Meir remained an important voice within the Labor Party while writing fun and documented biography, My Life (1976), published in Italy by Arnoldo Mondadori Editore. Golda Meir died in Jerusalem on December 8, 1978, after a twelve-year battle against leukaemia.