The reconstruction of the choir of the abbey of Saint-Denis (Paris), began in 1137 and was completed in the year 1144 by the Abbot Suger. This date is considered to be the starting date of the Gothic style, which shortly after that spread to the dioceses of the Île-de-France and then to the rest of France, England, and the rest of Europe, encountering significant resistance only in Italy. 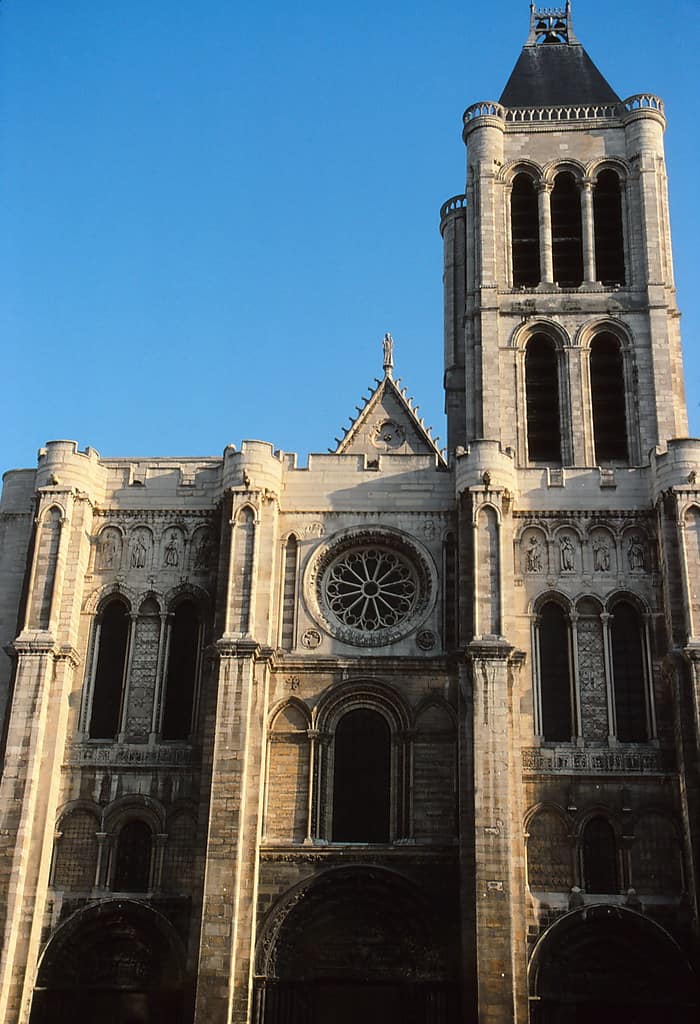 This style was significantly different from the preceding Romanesque style.

In 1140 the abbot Suger decided to rebuild the choir and the facade of Saint-Denis – the Benedictine abbey that kept the relics of the patron saint of Paris, Sait Dionysius. This saint had been the first bishop of the Gauls, and the memory of his figure soon merged with that of the Syrian monk Dionysius the Areopagite.

The Syrian monk Dionysius had written a treatise on light and angelic hierarchies, the De coelesti hierarchia, inspired by Neoplatonism. In this treatise, light was considered a sort of divine emanation that corresponded to supernatural realities. The abbey (founded in the early Middle Ages) became a symbolic place of the French monarchy. In fact, it was the shrine of the Capetian kings buried here.

Abbot Suger wanted to reconstruct his venerable abbey inspired by the philosopher’s theories. For this reason, he decided that the design of the new choir should include a series of radial and trapezoidal chapels directly connected to an ambulatory that allowed the faithful to move freely behind the choir fence. The radial chapels were covered by cross vaults and on the walls there were large windows that gave a great brightness to the interior space. The stained glass windows made the internal atmosphere almost divine, managing to bring to life the theories of Saint Dionysius.

Unlike Roman and Romanesque architecture, Gothic was dynamic, perforated, airy and light. Gothic architecture was characterised by accentuated vertical proportions, i.e. very developed height. Gothic churches usually had three naves, preceded by a porch and endowed with a deep but short transept. The choir is generally very long and surrounded by one or more ambulatories, which lead to the radial chapels and which are arranged radially around the apse. 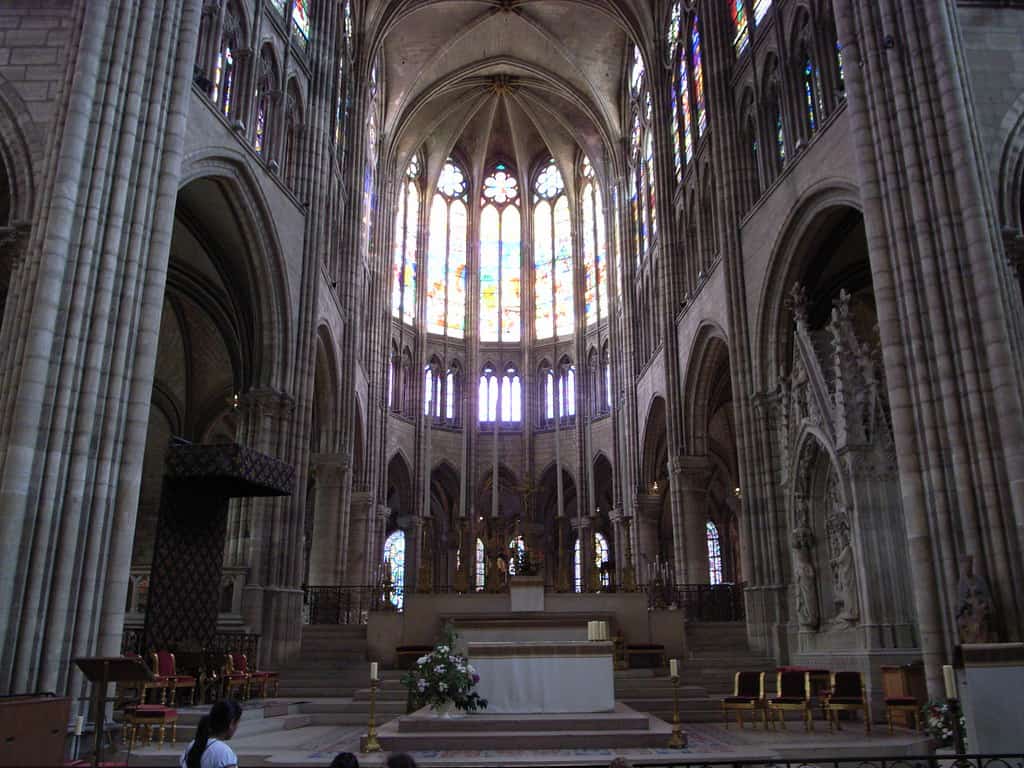 However, it was the new technical innovations that made Gothic architecture innovative. These innovations were:

The pointed arch is characterized by the curve of the intrados composed of two arcs of a circle, which intersect. Such arch is more robust than the rounded one since it reduces lateral thrusts, unloading the weight vertically and, therefore, on the piers. This way, the construction of supporting walls is not necessary, since the weight is supported by the massive beam or polystyle pillars, formed by the extensions and by the ribs. Thanks to this innovation, it became possible to build thinner walls.

The pinnacle was another new element introduced in Gothic architecture: it adds weight to the pillars and buttresses on which it is placed, straightening the oblique thrusts and contributing to the building’s static. It is made of stone and also acts as a decorative element. In fact, it is often surmounted by one or more statues and is composed of a soaring pyramidal element, enriched by detailed sculptures, which gives a sense of upward movement to the building.

All these new structures that support the entire construction allows limiting the thickness of the walls since they no longer have a supporting function. Therefore large parts of the walls were decorated with large windows, which, with their colours, created a suggestive atmosphere in the interior. The portion of the wall occupied by the stained glass windows is called clerestory (from the Latin “clarescere”, to be illuminated, to shine). It is usually located in the part where the central nave is higher than the side ones. The windows are also found in the walls of the choir, in the heads of the transept and in the facade.

What makes Gothic architecture fascinating is the close correspondence between aesthetic ideas and technological innovations. The aim of making the interiors of sacred buildings luminous and spacious is achieved thanks to the increasingly perfected and revolutionary use of the construction principles of the cross vault and the pointed arch. The absence of load from the vault on the perimeter walls, absorbed by the external pillars and buttresses, allowed to introduce glass windows which reached dimensions never seen before. 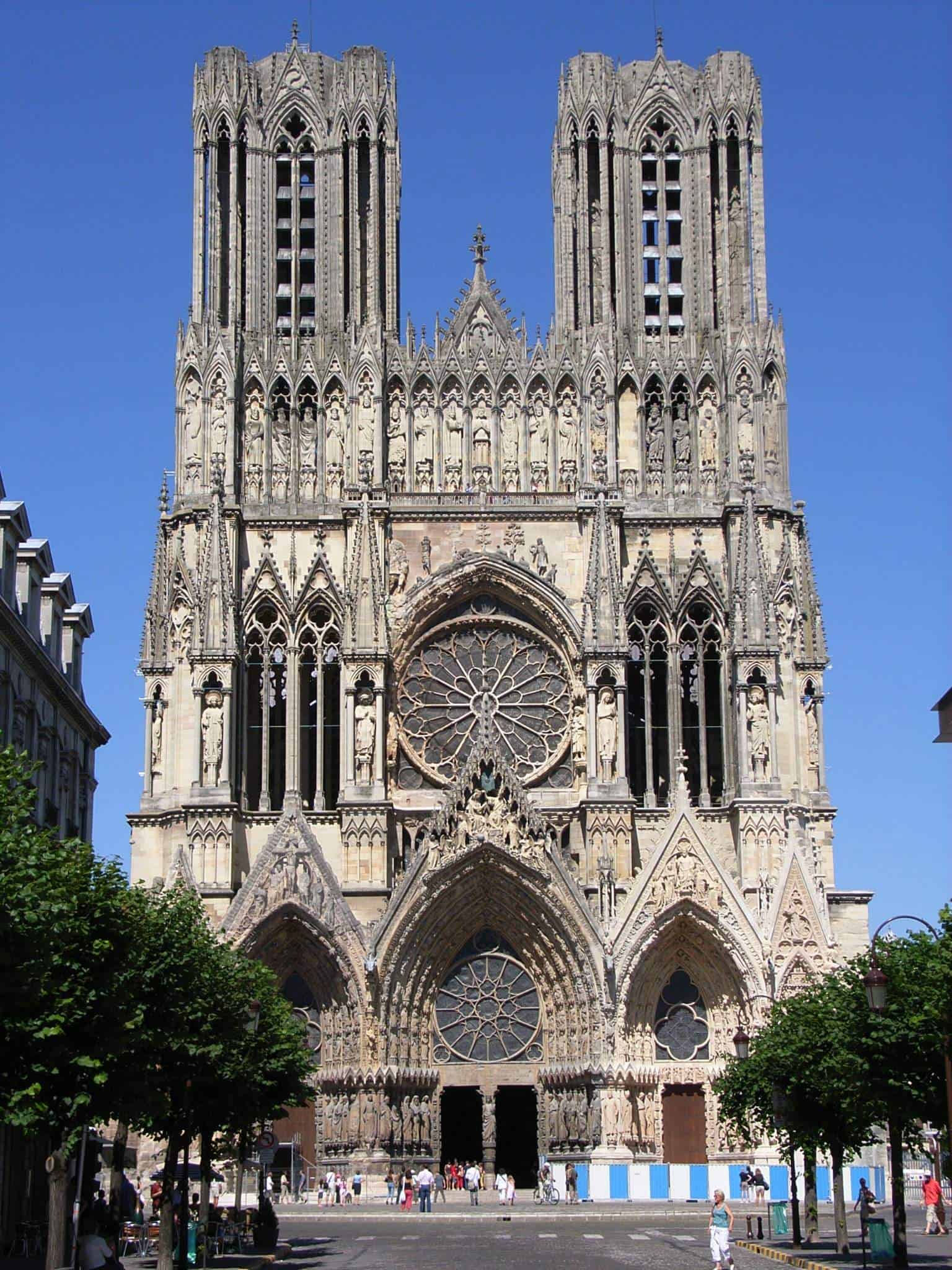 Generally, cathedrals and other Gothic churches were also decorated with sculptures depicting a variety of fabulous and frightening grotesque monsters. Such creatures were the gargoyle, the chimera, a mythical hybrid creature which the body of a lion and the head of a goat, and the Strix, a creature resembling an owl or bat, which was said to eat human flesh. These mythological creatures also belong to literature. For example, the Strix appeared in classical Roman literature: Ovid, a Roman poet who was widely read in the Middle Ages, wrote much about this creature and described it as a large-headed bird with transfixed eyes, rapacious beak, and greyish white wings. They were symbols of the evil and danger that threatened those who did not follow the teachings of the church

The concept of order in architecture

Medieval aesthetics, which finds in Gothic architecture one of its greatest achievements, has its foundation in mathematics and geometry. The art historian Otto von Simson stated that the proportions of churches were not random and that they were not determined by the need for spectacular effects. Rather, they derive from a vision of art as a science, that is, a search for the geometric relationships that are at the base of the cosmos and which are considered of divine origin. These are the same relationships that govern the world of music, whose harmonic rules are not merely natural facts, but reflections of celestial harmonies. The first Gothic buildings were constructed following the same principle of musical. In such a way, the sacred building cames to have the same harmonic relationships as music. In fact, this mathematical precision attempted to acknowledge God as the great architect of the universe, who had established these divine proportions at the beginning of times. Solomon’s own temple, according to the description that the Scripture makes of it, has perfect numerical proportions.

Augustine of Hippo, in the treatise De Musica, states that this type of aesthetic is a reflection of divine perfection. Architecture is the major art form that allows direct contact with God because it shares the same rules that the creator followed when he shaped the universe.

Notre-Dame de Paris is one of the most renowned churches for its beautiful gothic architecture. It is a medieval Catholic cathedral on the Île de la Cité in Paris, France. 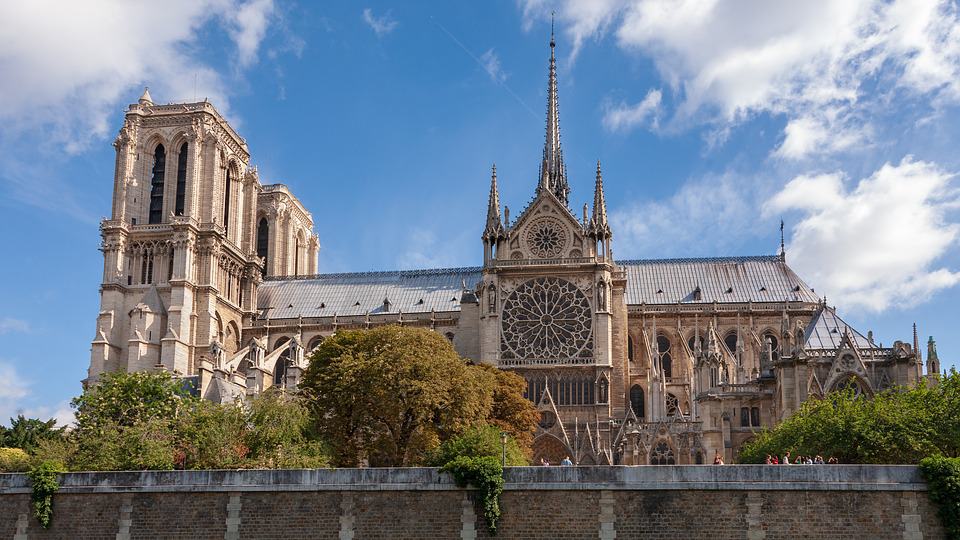 Notre-Dame was constructed on the ruins of two earlier churches. Around 1160, Maurice de Sully, the bishop of Paris, encouraged the project of converting the ruins of the two basilicas into a single, larger religious building. Notre-Dame remains one of the most popular tourist attractions in France with around 13 million visitors a year.

The cathedral is known to be one of the first buildings that incorporated flying buttresses. As a matter of fact, architects designed single-arch buttresses in order to prevent the walls from being pushed outwards under load.

The choir’s construction was completed in 1177, and the new High Altar was consecrated in 1182. Moreover, during the reigns of Louis XIV and Louis XV, Notre-Dame underwent significant alterations. These works on the cathedral were undertaken in order to modernise cathedrals throughout Europe. A large statue near the western entrance was destroyed in 1786, along with crypt tombs and stained glass windows.

The stained glass windows are one of the masterpieces of the church. The North Rose Window was built between 1250-1260. It features Mary holding the Christ Child, as well as images of kings and prophets of the Old Testament. On the other hand, the South Rose Window was built in 1260 and was a gift from King St. Louis. Its 84 panes are divided into four circles and are dedicated to the New Testament.