Palestine during World War I

There were many complications in Palestine during World War I. Turkish and German armies occupied the country until 1917 when British and French soldiers under General Allenby drove them out. Many physical and technical improvements were made, and with the successful Allied armies came doctors, engineers, mechanics, road-builders, and machines, bringing a sudden, twentieth-century transformation to Palestine. Meanwhile, contradictory Allied negotiations had not clearly excluded Palestine from the territories pledged to the Arabs; had proposed an international status for Palestine; and had favoured the establishment in Palestine of a national home for the Jewish people. The Paris Peace Conference, however, agreed to the establishment of a Palestinian state, and Great Britain was assigned the mandatory power by the San Remo Conference of 1920. This act was formalised by the Council of the League of Nations in 1922 and by the Treaty of Lausanne with Turkey in 1923.

From the beginning of British military occupation of Palestine in 1917 until the implementation of the San Remo decision, the area was governed by political officers of the British army. In July 1920, Sir Herbert Samuel, sent as high commissioner, established a civil government.

Palestine under the British Mandate

The terms of the mandate directed Great Britain to assist in the building of a Jewish national home. Accordingly, provisions were made in 1920 for the entry of one thousand Jewish immigrants a month. Undoubtedly, this policy, more than any other, charged the atmosphere in Palestine, causing emotional clashed between Jews and Arabs, as well as numerous acts of violence. Nevertheless, Palestine progressed. The influx of capital and skilled labour built the city of Tel Aviv outside the old Arab port of Jaffa, developed prosperous agricultural districts, and improved education, health, and general living standards to the advantage of the entire population. The Arab population, by natural increases and immigration from neighbouring territories, by 1948 numbered about 1,300,000; there were by that time around 700,000 Jews.

Besides the regular Zionist group in Palestine, a Communist group developed and cooperated with Arabs from time to time; on the right were the ultraorthodox groups objecting to Zionist political activities and the Revisionists, who complained that Zionism was not demanding enough. The latter group sponsored the Irgun Zvai Leumi and the Stern Group, each of which was a daring, ruthless, armed militia acting underground against Arab and British policies and institutions. The Zionists looked to the Jewish Agency for leadership and direction, and to Haganah, the Jewish militia, for protection – and later for underground action. Prior to 1939, much of the violence occurring in Palestine originated with the Arabs. Many of the Arabs did not think in terms of a Palestinian Arab state but considered the land part of the larger Arab state. However, there was a strong nationalistic group, led first in 1921 by Haj Muhammad Amin al-Husseini, the Mufti of Jerusalem and president of the Supreme Muslim Council. There were riots in Jerusalem in 1920 and in Jaffa in 1921, the Wailing Wall outbreak in 1929, and an organised rebellion in 1936. When this rebellion broke out, the Mufti was deposed as president of the Council; he fled the country and other Arab leaders were exiled to Seychelles. Nevertheless, the rebellion continued sporadically until the outbreak of World War II. Great Britain’s administration of the mandate provoked charges of evasion and indecision, but at best the Palestinian situation was difficult to handle. The Colonial Office was responsible for administration; the Foreign Office was concerned with regional policy in the Middle East. All too frequently this led to interdepartmental friction. 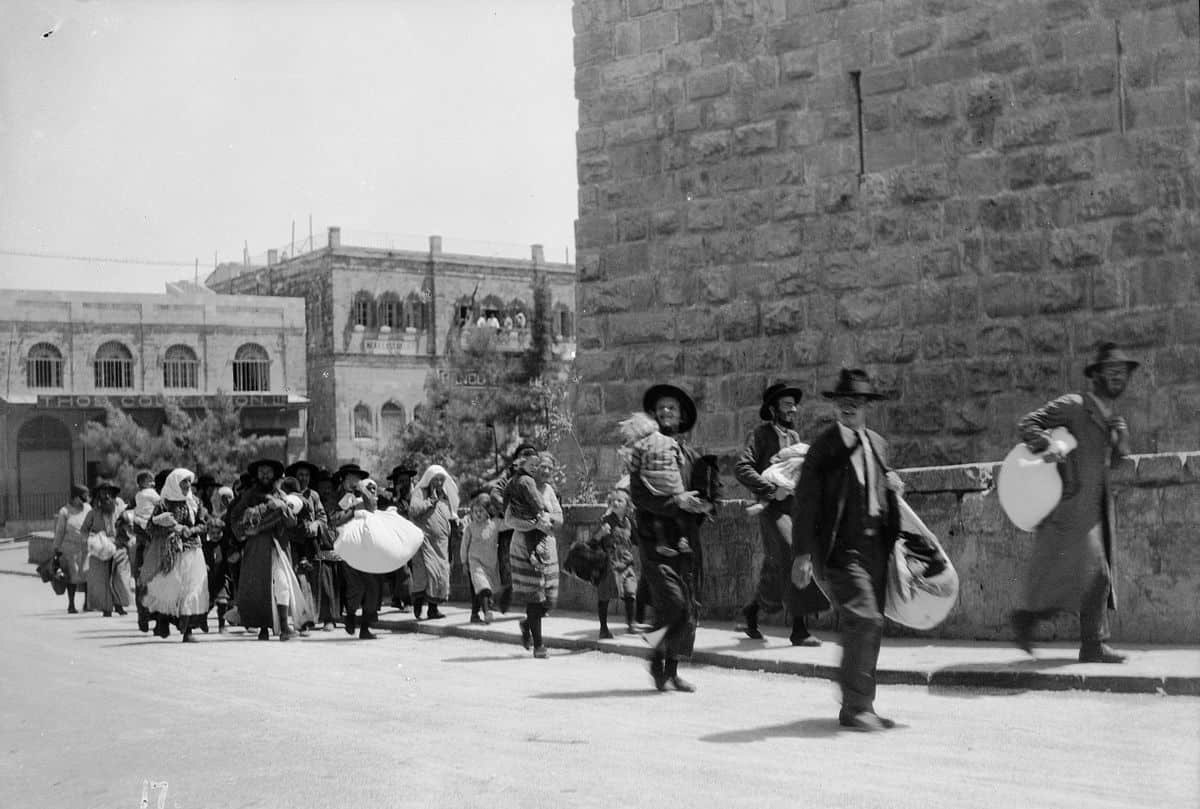 The Zionist program as prepared for presentation to the British in 1939, was designed to end the policy of indecision, to aid the development of the Jewish national home as required in the mandate, to meet opposition with overwhelming force, to permit unlimited Jewish immigration and land purchases, and to establish an elected assembly with equal Jewish and Arab representation, irrespective of population. Arab objectives were to end the mandate and the Jewish national home, to stop Jewish immigration and land purchases, and to give Palestine either independence or self-governing institutions. With the Colonial Office baffled by these unfamiliar problems, and the Foreign Office recognising the importance of Palestine and the Arab world in its imperial policies, British evasion and indecision were natural results.

In 1939, Arab-Jewish rivalry became subordinated to the greater goal of victory of the Allies. Although the ex-Mufti fostered pro-Axis propaganda before taking refuge in Nazi Germany, the Arabs and Jews generally held their ambitions in abeyance. Both sides, however, especially the Zionists, took advanced of the Middle East’s campaigns to arm themselves secretly. At the end of the war, great pressure arose from the immediate admission of several hundred thousand Jewish refugees and displaced persons from Europe. The Jewish Agency urged the termination of the mandate and the establishment of Palestine as a Jewish state (the Baltimore Program). The surrounding Arab states signed the Pact of Arab States in Cairo in 1945 to resist these demands, by force if necessary. Great Britain, meanwhile, hesitated to relinquish its mandate because of its withdrawal from Egypt and the strategic importance of the Palestinian coast. An energetic Zionist anti-British guerrilla war, however, forced the British to refer the problem of the United Nations, to declare the termination of the mandate, and to schedule the withdrawal of all British troops by May 15, 1948.

After many hearings, the United Nations, following the lead of the United States, voted in November 1947 for the partition of Palestine and the creation of independent Jewish and Arab states.

Open hostility developed immediately on the part of the Arabs against the scattered areas of Jewish settlement. The neighbouring Arab states openly sympathised, threatened to invade Palestine to protect the Arabs there, and hinted at reprisals against the United States oil interests. By early 1948 both sides were engaged in a guerrilla war of increasing violence, which caused the United States’ government to retreat somewhat from its pro-Zionist positions and propose a United Nations trusteeship that would shelve the partition plan, at least temporarily. By this time, however, each contestant’s emotions had been inflamed through considerable loss of life to a degree where compromise was impossible. As May 15 approached, the Haganah, gaining the upper hand over the Palestine Arabs, seized Haifa, Jaffa, and some smaller towns, while the Zionist extremists took drastic steps to break Arab morale. These moves led to severe demonstrations in Baghdad, Cairo, Beirut, and Damascus designed to force the leaders of the Arab states to concerted action against the Zionists. Troops of these Arabs states marched into Palestine as the last British troops were withdrawn. The Israeli-Arab War then moved into its larger phase, ending in a military victory for Israel and also in the expansion of its territory.

In 1920, the majority of the population (about 750,000 people) was composed of Arabic-speaking Muslims, including the Bedouin communities (estimated at 103,331 by the 1922 census and concentrated in the area of Beersheba and surroundings), and by Jews (which was about 11% of the total population). Moreover, within the community, there were also small groups of Druses, Syrians, Sudanese, Circassians, Egyptians, Greeks and Arabs from the Hijaz.

After the census of 1931, there were no other censuses, but the estimate of the population was made through the statistics on deaths, births, and immigration. The White Paper of 1939, whilst introducing restrictions on Jewish immigration, stated that the Jewish population had risen to around 450,000 inhabitants, becoming almost a third of the total population. In 1945, a demographic study revealed a total population of 1,764,520 inhabitants, of which 1,061,270 were Muslims, 553,600 were Jews, 135,550 were Christians, and 14,100 inhabitants belonged to other groups.