Before the formation of the Triple Alliance, there was the Dual Alliance. The Dual Alliance consisted of a defensive pact between Germany and Austria-Hungary. This treaty was established on the 7th of October, 1879. This was a part of Otto von Bismarck’s system of alliances to either prevent or limit war. The two powers promised to each other to intervene and offer support in case one of them was attacked by other countries. Also, they promised benevolent neutrality to the each other if one of them was attacked by another European power, this generally referred to the Franco-Russian Alliance of 1894.

Otto von Bismarck saw the alliance as a way to prevent the isolation of the German Empire, which was recently founded, and also to preserve peace as Russia would not risk waging war against both empires.

Considered to be one of the most surprising alliances of its time, even if both realms shared the German language and a similar culture, Austria-Hungary and Germany were often driven apart.
One of the most notable events that portray this was the recent Austro-Prussian War. The Habsburg rulers of Austria believed that the promotion of nationalism, that Germany favored, would destroy their multinational empire. The factor that united them however, was their mutual dislike of Russia. 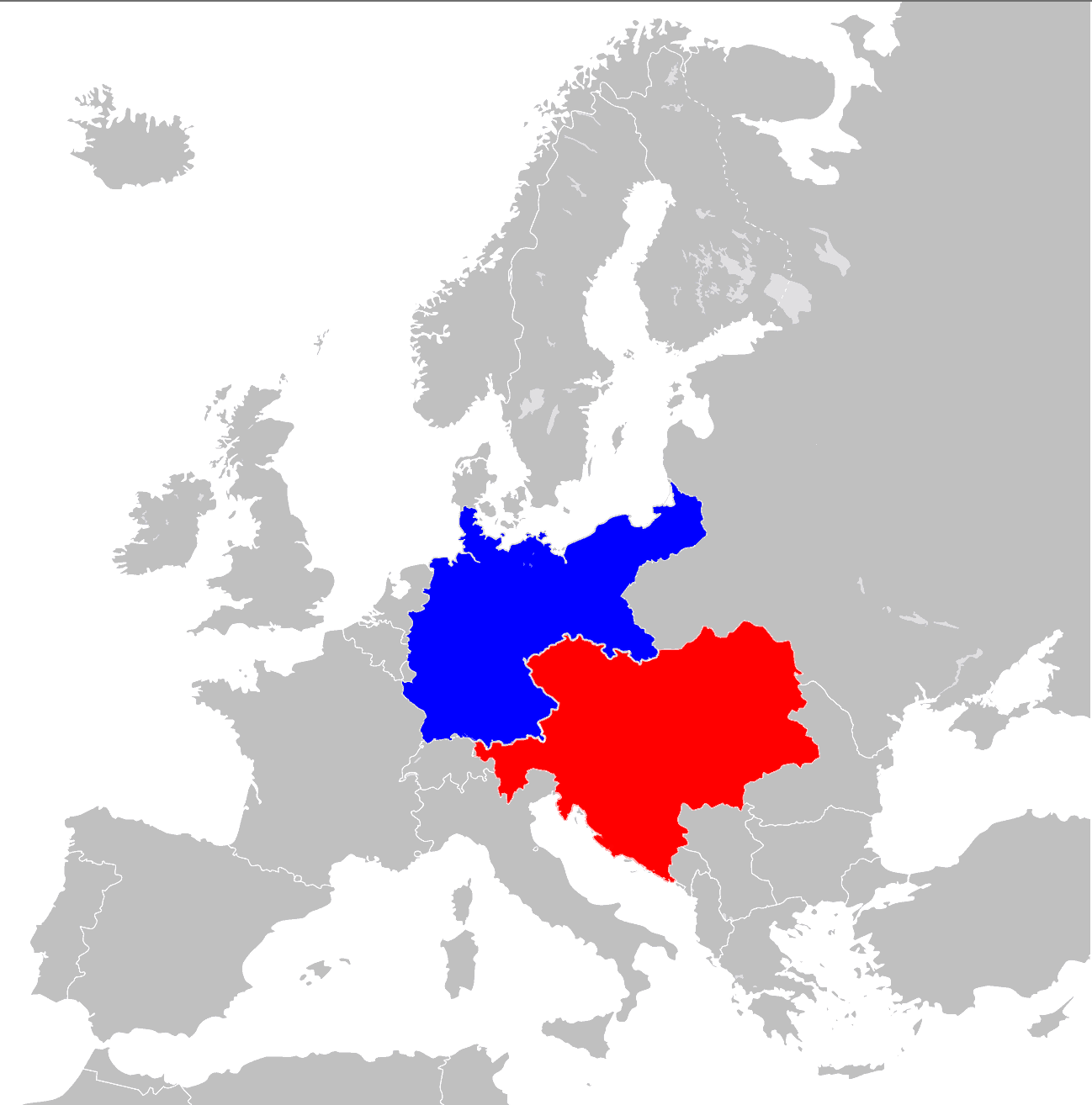 The German Empire was formed in 1871. The German chancellor, Otto von Bismarck, wanted to portray his nation as a peacemaker and preserver of the European status quo while in the same time he wished to gain more power for the German Empire and unite Germany. After the Ottoman Empire’s defeat by Russia in the Russo-Turkish War 1878, a treaty ensued named the Treaty of San Stefano. This treaty gave Russia considerable influence over the Balkans.

This development outraged Austro-Hungary, Russia’s chief rival in the Balkan region. In 1878, Bismarck called an international conference, the Congress of Berlin, in order to sort out the problem. From this meeting the Treaty of Berlin ensued that resulted in the reversing of the Treaty of San Stefano, and provided the Austrians with compensations in the form of Bosnia. Even if Bismarck attempted to play the role of an “honest broker”, the Russo-German relations deteriorated. The Three Emperors League was discontinued, and Germany with Austria-Hungary was free to ally however this was not to be without future repercussions.

The principal architect of the alliance was Bismarck. Although having its territorial ambitions thwarted by the rise of Germany and Italy as new national powers, Austria-Hungary feared more the Russian and French interests in Europe. The state could not cope with additional territories anyway, the forging of alliances seemed the best course of action and thus Austria-Hungary was already predisposed to form such alliances with Germany and later even Italy.

For a long time, Italy and France competed in establishing a colony in Tunisia. In the end Italy lost the race and wished to enlist diplomatic support. Italy joined Germany and Austria-Hungary to form the Triple Alliance in 1882. Shortly after, Serbia joined the alliance through a treaty with Austria-Hungary. In 1883, Romania joined the alliance and thus a powerful Central European bloc was created. Romania secretly joined the alliance on the orders of King Carol I, who was of Germanic ancestry, coupled with the fact that the king feared Russian expansion and their competing claims on Bessarabia.

This was the first formal war-camp in Europe, the second being the Triple Entente, an informal alliance formed in 1907.The treaty provided that Germany and Austria-Hungary were to assist Italy if it was attacked by France without provocation. In return Italy would do the same for Germany yet for Austria-Hungary, it promised to remain neutral if Russia attacked. The treaty was renewed in 1887, Italy gained an empty promise of German support of Italian colonial ambitions in North Africa in return for Italy’s continued friendship.

Bismarck had to pressure Austria-Hungary into accepting the principles of consultation and mutual agreement with Italy on any territorial changes initiated in the Balkans or on the coasts and islands of the Adriatic and Aegean seas. 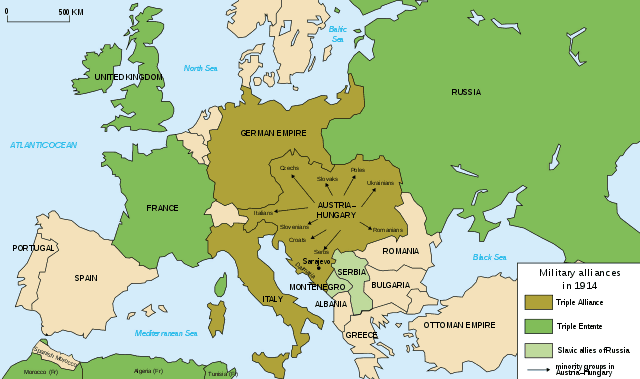 However, Italy and Austrian-Hungary couldn’t overcome their basic conflict of interest in that region despite the treaty. In 1891 attempts were made to add Britain to the alliance, though it was unsuccessful and rumors were widely spread about the fact that Britain had joined with Russia. This fear would later on be proven to be correct. After the alliance was renewed in 1902, Italy secretly extended a similar agreement to France. Neither Italy nor Austro-Hungary was permitted to change the status quo in the Balkans without previous consultation.

On the 1st of November, Italy and France promised to each other to remain neutral in the event of an attack on the other.

The Treaty of Berlin was a direct cause of the formation of the Triple Entente. Because of the treaty, the Three Emperors League began to slowly fade. It reached its climax in 1890 when Germany refused to renew its reinsurance treaty with Russia. In consequence, Russia began negotiations with France. France was the perfect candidate as an ally against Germany. They were still craving for revenge after the Franco-Prussian war, especially in regards to the lost territories of Alsace and Noir.

With an increasingly powerful Germany and a hostile Central European combination, France was pushed to begin diplomatic relations with Russia in order to counter the power imbalance.
The French began to aid Russian projects, especially the Trans-Siberian RR, and thus friendly diplomatic visits were often exchanged. In 1891 the alliance consolidated and it was strengthened by a military convention in 1893, and by 1984 the Dual Alliance came into existence. This was publicly acknowledged in 1895. 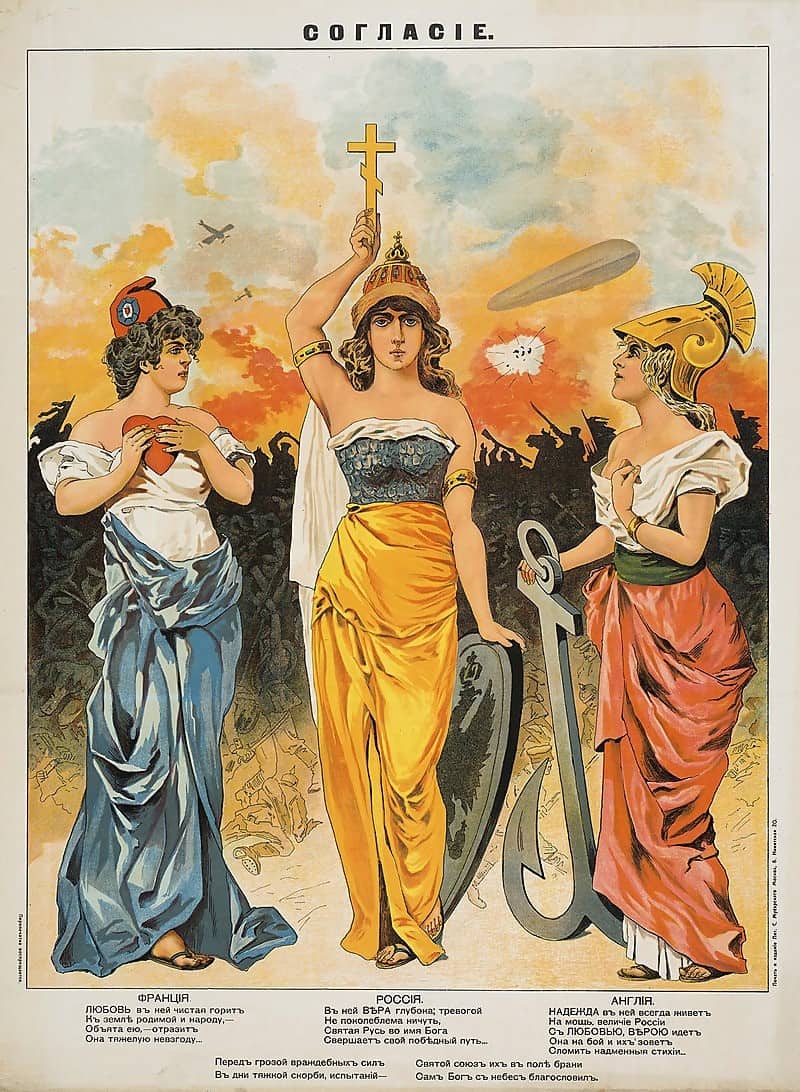 Otto von Bismarck was the principal man responsible for the creation of the Triple Alliance. However, he began to lose power after the accession of William II to the throne of the German Empire.
This was followed by the appearance of more adventurous reign policies by the new leadership. Germany had now committed itself almost solely to colonial and commercial expansion. The German plan for a Baghdad Railway was viewed with great anxiety by the powers with interests in the Middle East. The German commercial rivalry with Great Britain not only brought direct trouble, but nourished German desire for sea power and a large navy. 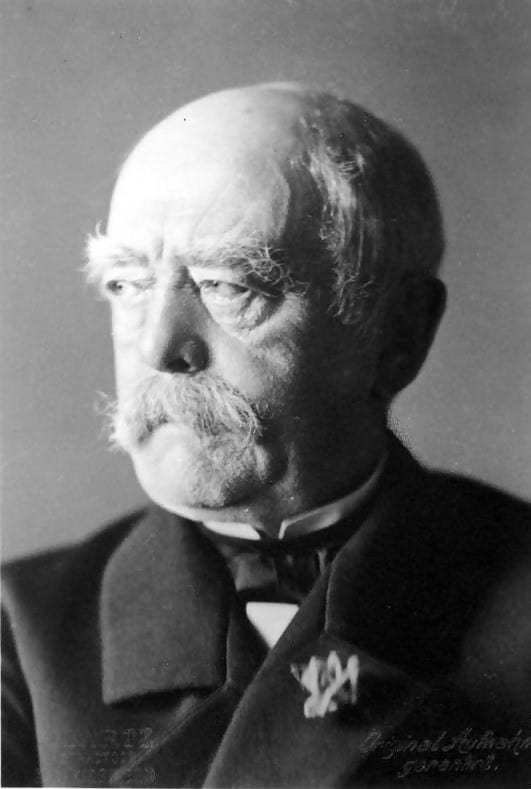 Britain was for a very long time in isolation with regards to the other European nations. Britain was propelled by its interests to make some move toward protective international alliances. Some efforts towards a Franco-German re-approach were made, however it ultimately had no effect. This was about to change when a man by the name of Theophile Delcasse took control of French foreign policy.

He strongly opposed Germany and also luckily for Britain, also wished to re-approach the British. Theophile’s main objective was now to begin the isolation of Germany. At first, the friendship between Britain and France did not seem possible because of their traditional enmity and, more important, their colonial quarrels in Africa.In regards to Germany however, they were traditional friends and above all, Britain and Germany were bound by dynastic and cultural ties. There had been and continued to be active expressions of Anglo-German amity, yet this was to come to an end.

Theophile’s diplomacy aided by the accession in 1901 of the Francophile Edward VII to the British throne ultimately bore fruit. Although Britain and France had previously been on the verge of war with each other over the Fashoda Incident in 1898, the matter was settled and the way opened for further agreements between the two powers. For the moment there was no official alliance or anything of the sort yet the Entente Cordiale, a friendly understanding, was arrived at in 1904. The more problematic aspect of the future alliances now lay with Russia. Colonial rivalries between Russia and Britain gave way in the late 19th century to hostilities between them. The field of contest was Asia, Turkish affairs, Persia, Afghanistan, China and India.

However, after the defeat of Russia in the Russo-Japanese War, and particularly after Sir Edward Grey gained influence in the British foreign office, Britain slowly began to favor a friendly settlement. This was finally achieved in the Anglo-Russian entente of 1907. The agreement created the international group opposing the Triple Alliance. Officially the nations of France, Great Britain and Russia formed the Triple Entente.

The demise of the formed alliances and all the conflicts that were present and followed can be summed up into two principal problems that caused outright conflict: Morocco and the Balkans.
Military actions were prompted by a growing sense of international hysteria, which was in turn increased by military preparations. The crisis in Morocco in 1905 almost precipitated the war. However, the more serious crises were brought up by the annexation of Bosnia and Herzegovina by Austria-Hungary in 1908.Also the Italo-Turkish War 1911 – 1912 and the Balkan Wars of 1912 to 1913. The trouble between Austria and Serbia reached a peak after the assassination of Archduke Francis Ferdinand in 1914, later resulting in the start of World War I.

The Italian interests had long been more or less divorced from those of the Triple Alliance. Ever since the Franco-Italian accord in 1902 regarding North Africa, had been reached in secrecy. 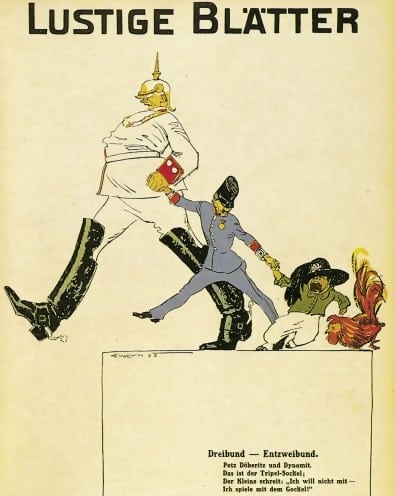 Austria-Hungary found itself at war in 1914 with the Triple Entente. After establishing that the aggressor was Austria-Hungary, Italy declared neutrality and the Triple Alliance formally came to an end in 1914.

With the outbreak of the war, both Italy and Romania refused to join the Central Powers. They joined the Allies in 1915-16 after many secret negotiations. Germany and Austria-Hungary gained new support in the Ottoman Empire and Bulgaria. The war ushered in a new diplomatic period, with new diplomatic alignments both the Triple Alliance and the Triple Entente receded into history.