William Harvey was the first English physician to discover the mechanics of the circulation of the blood. He was born at Folkestone, Kent, on April 1, 1578. He was the eldest son of Joan and Thomas Harvey, later mayor of Folkestone. William had six brothers and two sisters. Of his brothers, five became successful London merchants who traded with Turkey and the Levant. One of them, Eliah, looked after William’s interest in his later life and it was in his house when William died. 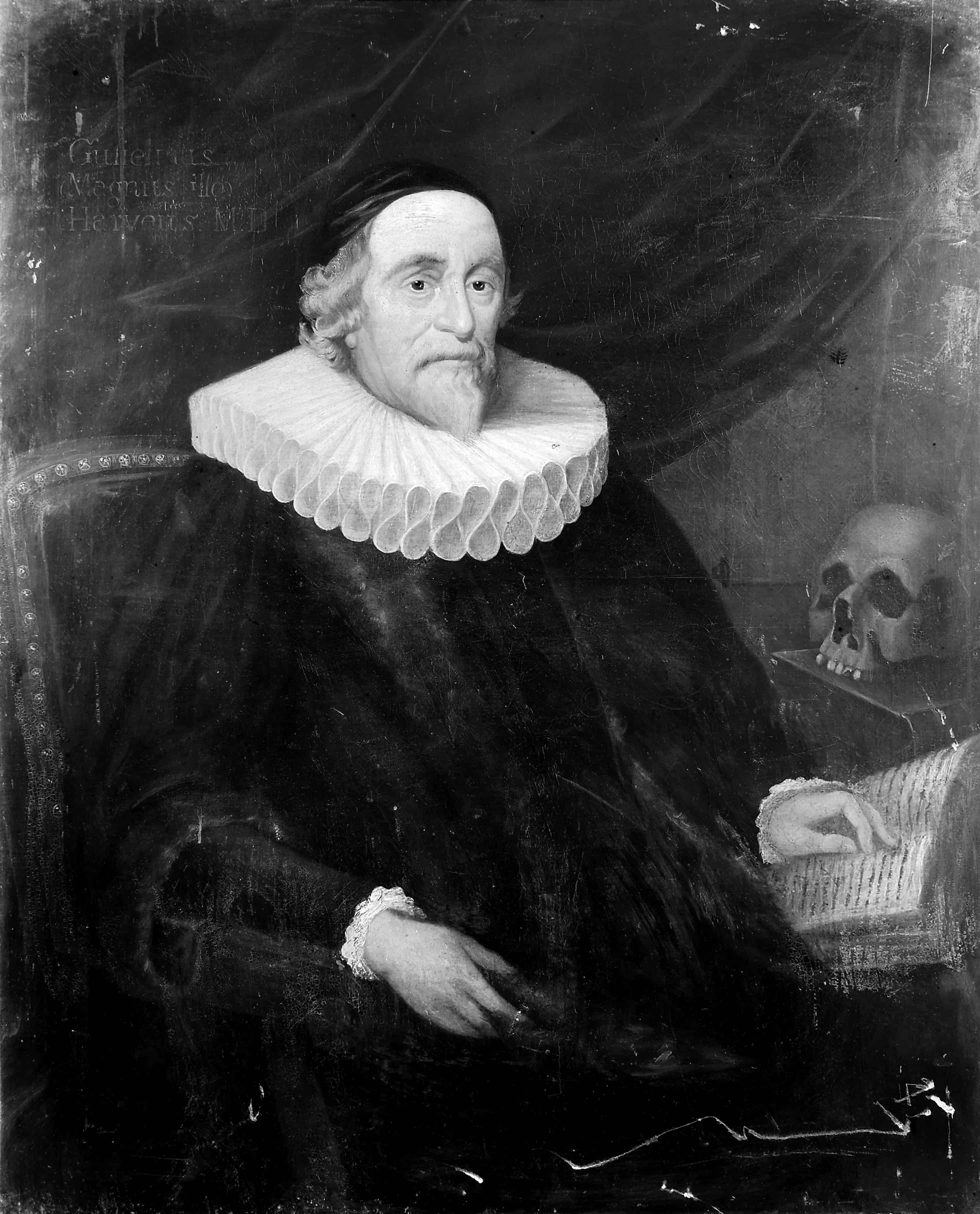 It seems probable that William was first sent to the local school in Folkestone, where he learned to read and write. In 1588 he went to King’s School in Canterbury where he was taught Latin grammar. He was admitted to Caius College, in the University of Cambridge in May 1593, and a little later that same year, he was awarded the special scholarship in medicine which had been founded in 1572 at the college by Matthew Parker, archbishop of Canterbury. Although Sir Charles Scarburgh, Harvey’s great friend at the end of his life, said that it was at Padua that Harvey first decided to make medicine his career, it would seem that his interest in that subject started at a much earlier age. From the details of the scholarship which he held for a period of six years, it is known that Harvey spent the first three years studying subjects useful to medicine – the classics, rhetoric, philosophy, and perhaps some mathematics. He was particularly interested in philosophy, and the natural philosophy of Aristotle was the great formative influence which can be seen in all his subsequent writings. During the second three years, Harvey studied those subjects which make up the base of medicine itself. However, in Cambridge at this time these studies were limited to readings and discussions of writings of Hippocrates and Galen, and other medical textbooks. From time to time Harvey may have seen an anatomical demonstration, for the Regius Professor of Physics was supposed to dissect a body each winter, and Caius College had a special arrangement by which it was allowed each year to dissect two bodies of executed criminals. Still, Harvey’s training in medicine at Cambridge was largely theoretical. For the real instruction in medicine and surgery, medical students of those days had to go to schools in such cities as Padua, Verona, Montpellier, and Paris on the European continent. Harvey took his B.A. degree in 1597 and finally left Cambridge in October 1599.

At the University of Padua and Association with Fabricius

While still a student at Cambridge, it seems likely that Harvey travelled France, Germany, and Italy and probably decided to study at the University of Padua. The exact date of when first went there is unknown, but during the year 1600, he was elected councillor or representative of the English nation by the English students at the university. The medical school at Padua was then at the height of its fame. Anatomical studies were flourishing under Hieronymous Fabricius of Aquapendente, who held first the chair of surgery and later those of anatomy and embryology. Fabricius was the pupil and successor of Gabriel Fallopius, who had carried on the great renaissance of anatomical studies begun in Padua by Vesalius. Although Galileo had been appointed to the chair of mathematics at Padua in 1592 and was teaching there in Harvey’s time, there is no indication in Harvey’s works that he knew anything of Galileo or of his teaching. Harvey’s chief debt in Padua was to his master and friend Fabricius. 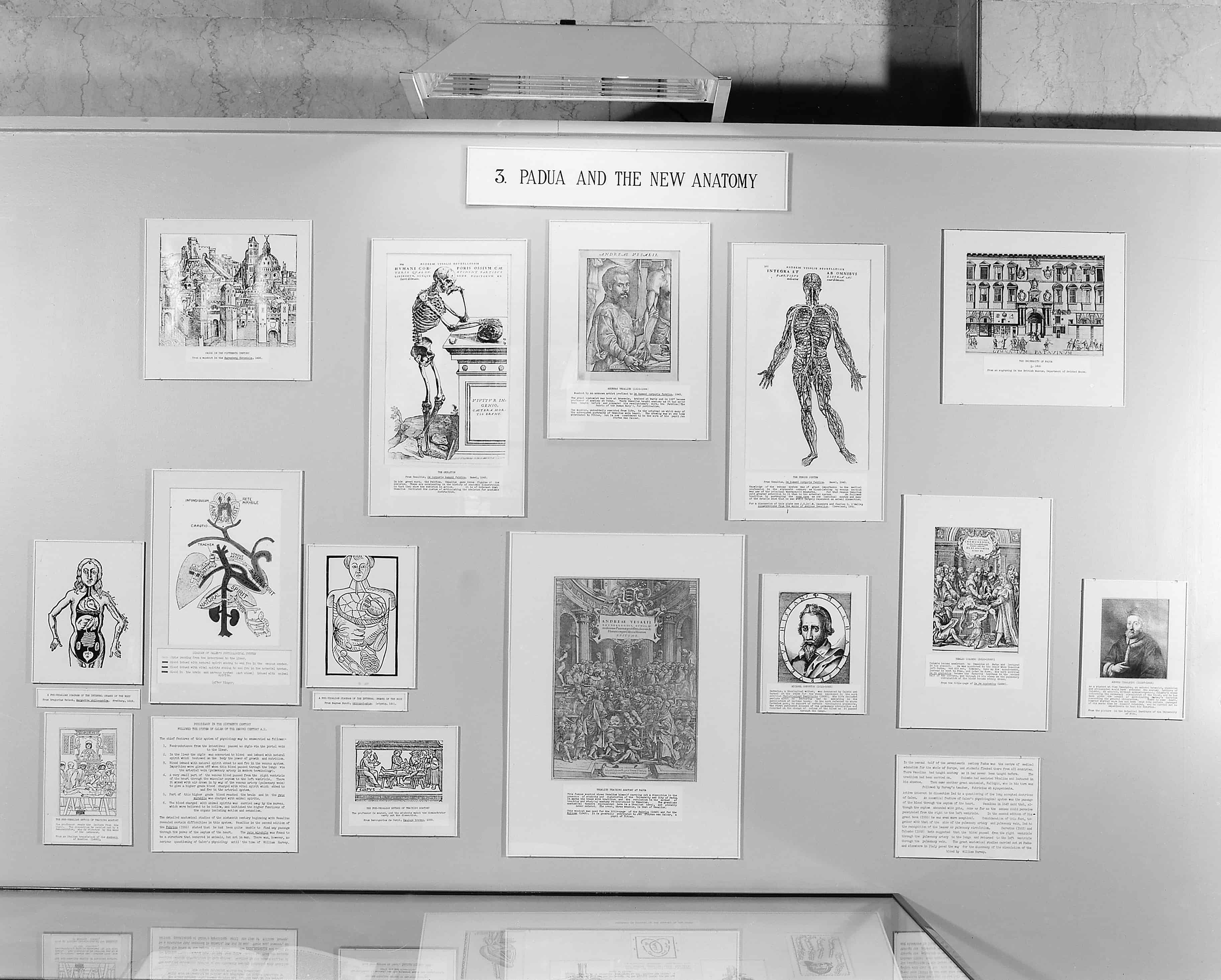 When Harvey came to Padua, Fabricius was an old man, and although many of his writings had not then been published, the work for most of them had already been done. His most important work, On the Valves in the Veins, appeared in Harvey’s first year at Padua, but Fabricius had demonstrated the existence of valves in his class as early as 1578. The influence of this work on Harvey is incontestable, for Fabricius showed that the valves were always placed so that their mouths were directed towards the heart. However, Fabricius did not see their relevance to the circulation of the blood. Fabricius’ work in embryology had begun at least as early as 1589, although his book The Formed Foetus was not published until 1604. The Formation of the Egg and of the Chick did not appear until 1619. Both of these books were of capital importance in Harvey’s own work On the Generation of Living Creatures (1651). Fabricius’ work on the structure of muscle and its method of action was not published until 1614 (he died in November 1613), but it was utilised by Harvey in his notes for his unpublished treatise On the Local Movement of Animals. While at Padua, Harvey attended lectures in the anatomical theatre built in 1594. It still stands today. It is a small room, about twenty-five by thirty feet in size, and from an oval pit in the centre rise six galleries which provided cramped accommodation for about three hundred students. Harvey as counsellor of the English nation had the right to stand in the first gallery. The only lighting was provided by candles and lamps. At the dissecting table in the centre of the floor sat the professor, while the demonstrator showed the students the various parts of the body as they were discussed. Around the table were a number of benches for various dignitaries of the universities and cities of Padua and Venice.

On April 25, 1602, Harvey completed his studies at Padua and received the degree of Doctor of Medicine. On his return to England in the same year, he settled in London. However, his degree did not give him the right to practice medicine within the City. The licence to do this had to be granted by the College of Physicians, who were particularly concerned to prevent quacks from deceiving the public. In 1603, Harvey applied to the college as a candidate for admission. He was examined in the spring of that year and was given leave to practice until his next examination which was fixed for April of the following year. Harvey was finally admitted as a member of the college. In November, he married the daughter of Dr Lancelot Browne, physician to Queen Elizabeth I and to King James I. His wife died in 1645 and they had no children.

In 1607 Harvey was admitted as a Fellow of the College of Physicians, and two years later asked to be appointed as physician to the Hospital of St. Bartholomew. The governors of the hospital agreed to appoint him as soon as the existing physician died or retired. As this happened in August 1609, Harvey was called upon immediately to fill his place. His duties as a physician were to attend the hospital at least twice a week throughout the year and more often if necessary; to examine the sick brought before him in the hall of the hospital, and to prescribe medicines for them. For twenty years after his appointment, Harvey regularly performed his duties as the hospital’s physician in spite of his increasing practice as a doctor in London, his work for the College of Physicians, and his own experimental observations. In 1613 Harvey was elected a censor of the College of Physicians and two years later was made Lumleian lecturer.

Circulation of the Blood and other Studies

In 1627, Harvey wrote notes for a treatise, on the Local Movement of Animals. This work is not of great importance but is interesting to physiologists and neurologists, for it shows among other things Harvey’s unsuccessful attempt to solve the problem of the contraction of muscles. 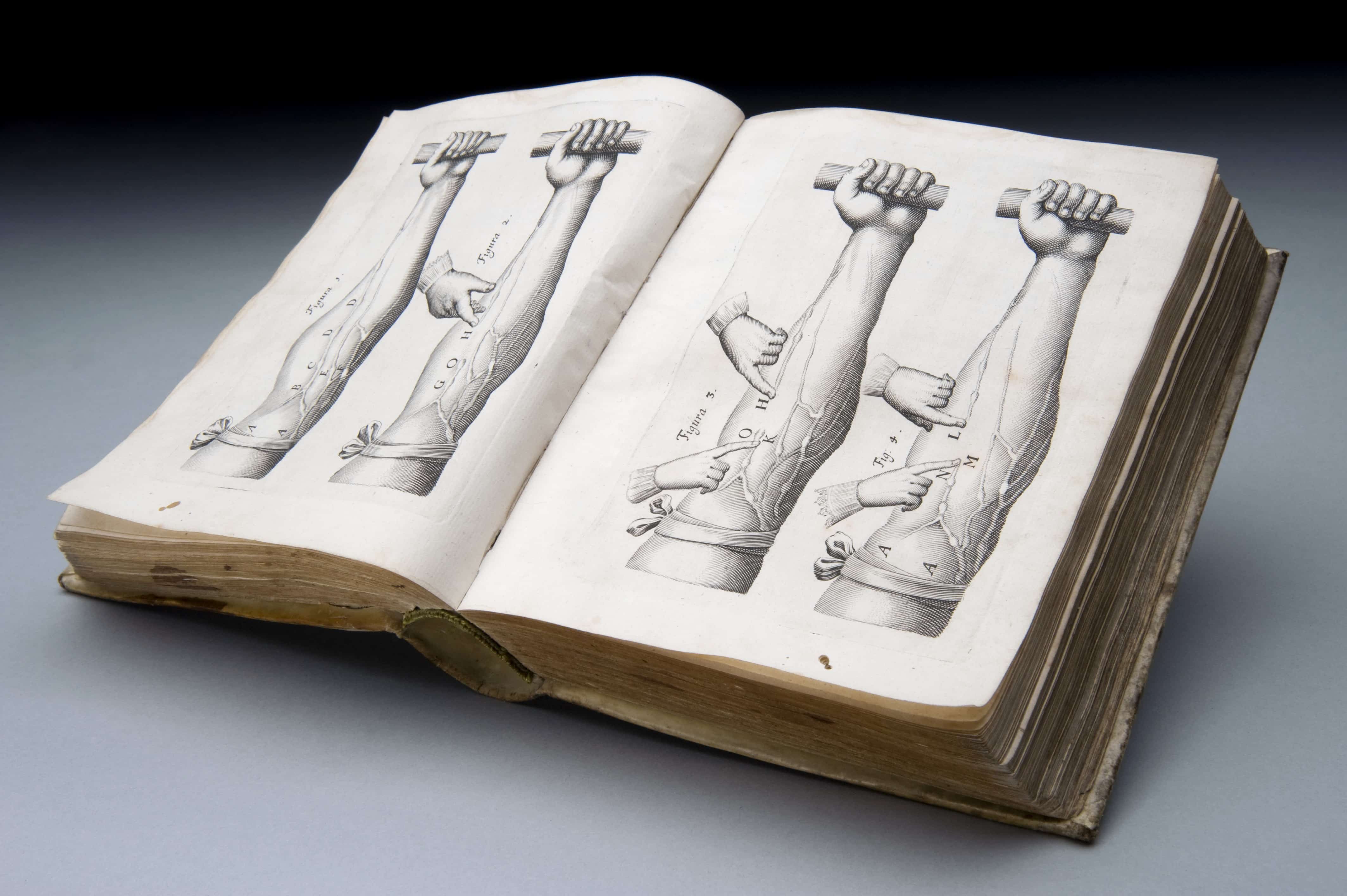 In 1628, Harvey’s greatest work, An Anatomical Treatise on the Movement of the Heart and Blood in Animals was published in Frankfurt. In this work, he explained with exemplary clarity his observations of the movement of the heart and blood, his theory of the circulation of blood and his experimental proofs of the validity of his theory. He wrote that for nine years he had been working on this subject, slowly drawing the inevitable conclusions from his observations and experiments. By determining the correct path the blood took through the body, he concluded that the amount and rate of passage of blood from the heart necessitated that the blood return to the heart. At a time when men believed that the blood ebbed and flowed in the veins like the sea, or at best that some blood passed merely through the lungs and back to the heart, Harvey’s theory was so revolutionary that threes little wonder that he met with some bitter opposition. A fact even more remarkable is that before he died in 1657 the truth of his findings was completely acknowledged.

Some time at the beginning of 1631, Harvey became physician-in-ordinary to King Charles I. From then on his fortunes were linked with those of the King and they became close personal friends. Charles was genuinely interested in Harvey’s work.

[2.] Friedland, G. (2009). Discovery of the function of the heart and circulation of blood. Cardiovascular Journal of Africa. Available from: https://www.ncbi.nlm.nih.gov/pmc/articles/PMC3721262/

[4.] Schultz, S. G. (2001). William Harvey and the Circulation of the Blood: The Birth of a Scientific Revolution and Modern Physiology. American Physiological Society. Available from: https://www.physiology.org/doi/full/10.1152/nips.01391.2002