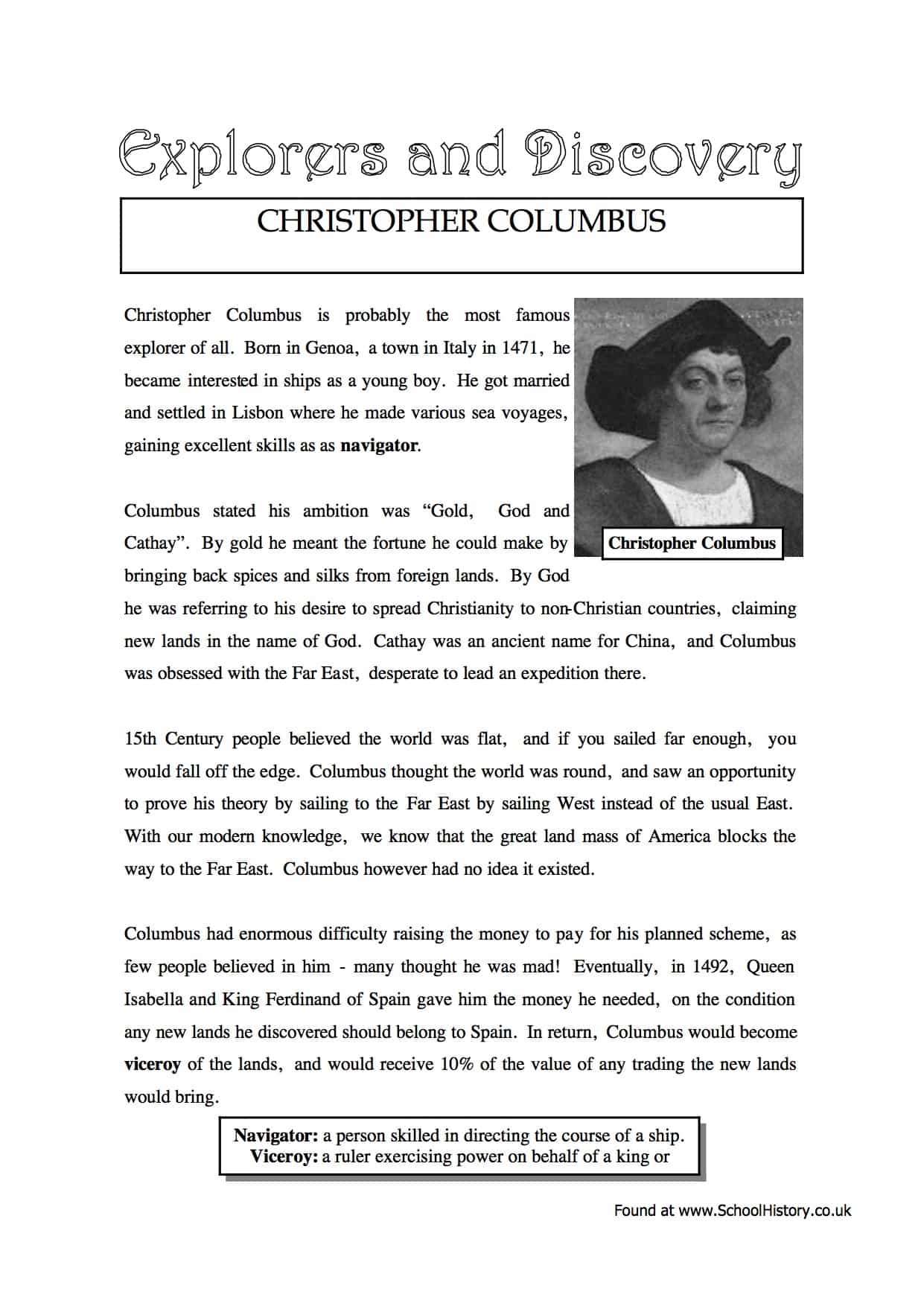 Christopher Columbus is probably the most famous explorer of all. Born in Genoa, a town in Italy in 1471, he became interested in ships as a young boy. He got married and settled in Lisbon where he made various sea voyages, gaining excellent skills as as navigator.

Columbus stated his ambition was “Gold, God and Cathay”. By gold he meant the fortune he could make by bringing back spices and silks from foreign lands. By God he was referring to his desire to spread Christianity to non-Christian countries, claiming new lands in the name of God. Cathay was an ancient name for China, and Columbus was obsessed with the Far East, desperate to lead an expedition there.

15th Century people believed the world was flat, and if you sailed far enough, you would fall off the edge. Columbus thought the world was round, and saw an opportunity to prove his theory by sailing to the Far East by sailing West instead of the usual East. With our modern knowledge, we know that the great land mass of America blocks the way to the Far East. Columbus however had no idea it existed.

Columbus had enormous difficulty raising the money to pay for his planned scheme, as few people believed in him – many thought he was mad! Eventually, in 1492, Queen Isabella and King Ferdinand of Spain gave him the money he needed, on the condition any new lands he discovered should belong to Spain. In return, Columbus would become viceroy of the lands, and would receive 10% of the value of any trading the new lands would bring.

Columbus set sail in 1492 with three ships, the Santa Maria, the Nina and the Pinta. He sailed from the Canary Islands out into the open seas. At that time it was unusual to travel away from the coast, and his crewmen were extremely nervous.

Eventually Columbus landed on an island now called Watling Island, and then explored the coasts of Cuba and Hispaniola. He thought he had discovered some unknown islands near to Japan, and that the known East Indian Islands and the mainland of Asia were not far away. Since he had sailed to find the East Indies, he called his discoveries the West Indies.

Columbus found the natives friendly and eager to trade, but was now impatient to return to Spain to report his findings. He set off back, but on Christmas Day 1492 one of his ships – the Santa Maria – hit a reef and was wrecked. Columbus was forced to leave 43 men behind as there wasn’t enough room on the remaining ships.

Columbus was hailed a hero on his arrival back in Spain, but he was impatient to return. He led two further expeditions in 1493 and 1498. During these, Columbus discovered Trinidad and touched the mainland of America, beginning Spanish colonisation in America.

However, these further expeditions were not a success. Columbus found the men he had been forced to leave had been killed by the natives. When he set up a new settlement, Columbus governed badly and mistreated both Spanish and natives. Due to his failure to govern properly, Columbus was arrested and sent back to Spain in chains. He was later forgiven, but his pride was badly damaged. He felt he had been misunderstood and asked to be buried with chains as a reminder of how he had been treated.