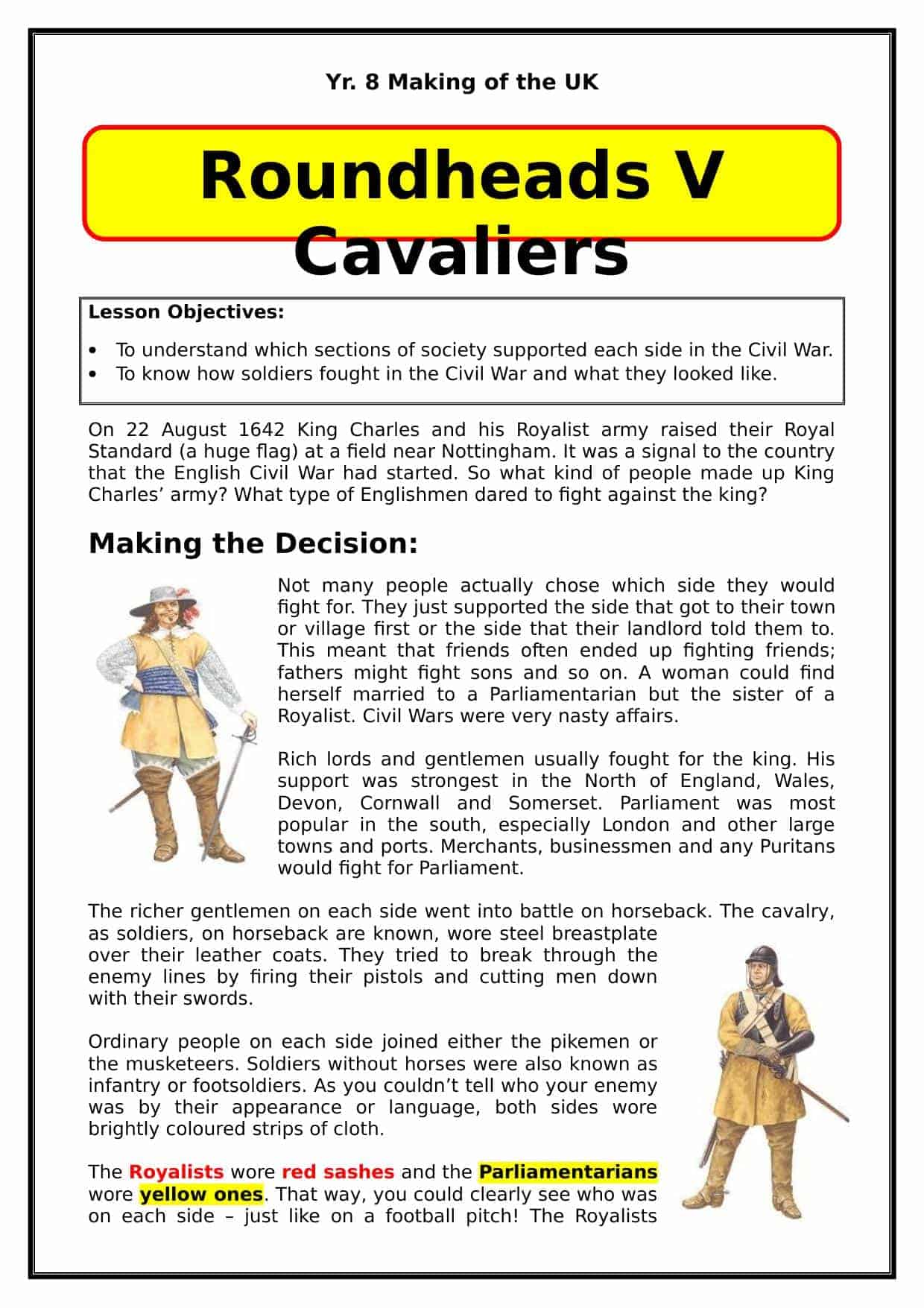 On 22 August 1642 King Charles and his Royalist army raised their Royal Standard (a huge flag) at a field near Nottingham. It was a signal to the country that the English Civil War had started. So what kind of people made up King Charles’ army? What type of Englishmen dared to fight against the king?

Not many people actually chose which side they would fight for. They just supported the side that got to their town or village first or the side that their landlord told them to. This meant that friends often ended up fighting friends; fathers might fight sons and so on. A woman could find herself married to a Parliamentarian but the sister of a Royalist. Civil Wars were very nasty affairs.

Rich lords and gentlemen usually fought for the king. His support was strongest in the North of England, Wales, Devon, Cornwall and Somerset. Parliament was most popular in the south, especially London and other large towns and ports. Merchants, businessmen and any Puritans would fight for Parliament.

The richer gentlemen on each side went into battle on horseback. The cavalry, as soldiers, on horseback are known, wore steel breastplate over their leather coats. They tried to break through the enemy lines by firing their pistols and cutting men down with their swords.

Ordinary people on each side joined either the pikemen or the musketeers. Soldiers without horses were also known as infantry or footsoldiers. As you couldn’t tell who your enemy was by their appearance or language, both sides wore brightly coloured strips of cloth.

These soldiers were tough. The pikeman’s job was to stand at the front of the whole army with a 5m long pole, a pike, tipped with steel.

As the enemy approached, they dug one end into the ground and pointed the other at the charging enemy’s horse.

They wore heavy armour (who could blame them!) and also carried a sword.

A musket was a big clumsy gun. It was so heavy that musketeers (the men who fired it) often needed a stick to rest it on.

The gun was fired by using a match to light the gunpowder that had been poured into the barrel. Hopefully a ball or shot would fly out and travel up to 400m.

It was all a slow, complicated and very dangerous job – there was always a chance of accidentally blowing a finger off. One Royalist said ‘We seem to bury more fingers and thumbs than we do men!’

There were 365 different clashes between the Cavaliers and Roundheads during the English Civil War. Sometimes the Cavaliers won, sometimes there was no clear winner and, on other occasions the Roundheads claimed victory. One Royalist general and his troops even changed sides – but forgot to change the red sashes to the new Roundhead yellow ones. They were all shot by their new allies.