The Importance Of A Elizabeth I Marriage 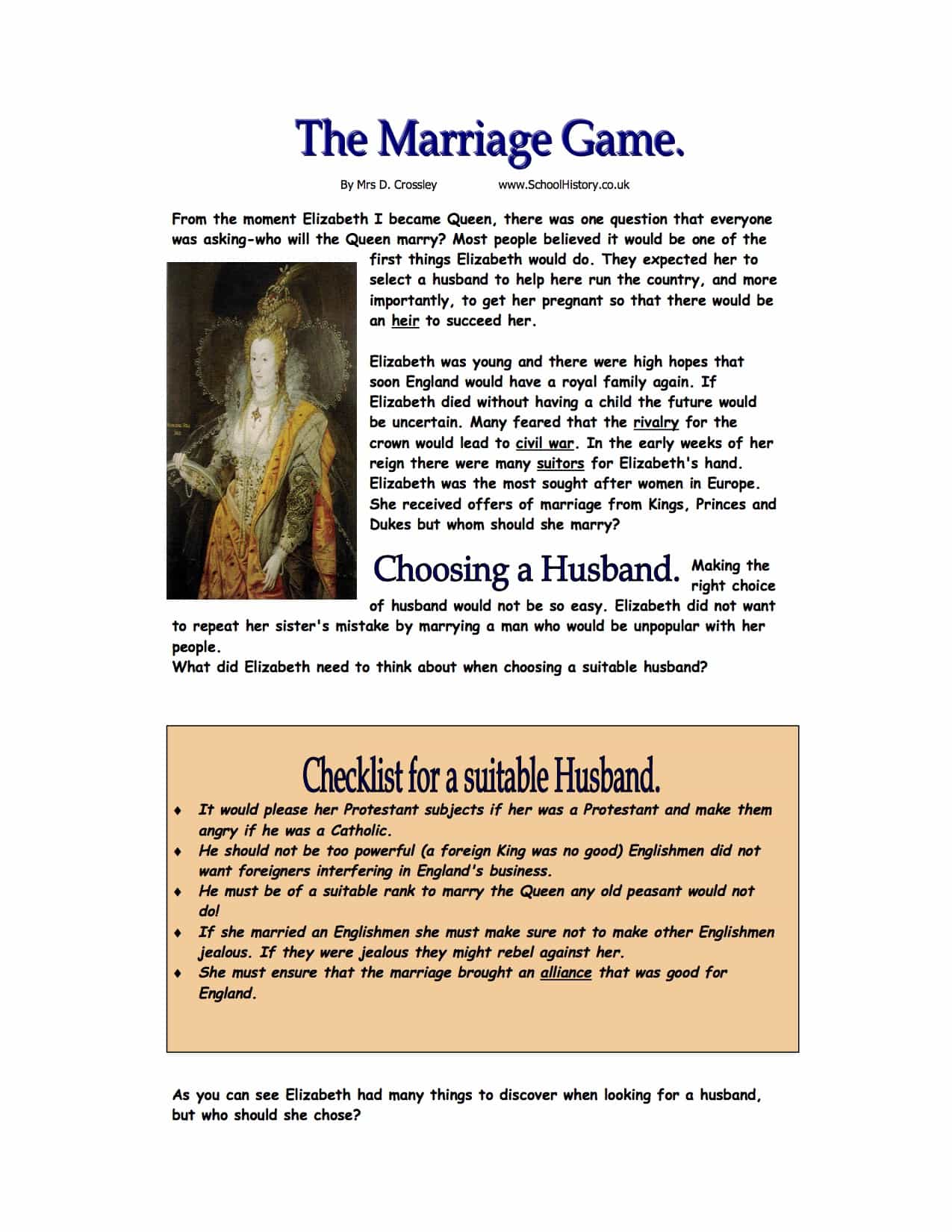 From the moment Elizabeth I became Queen, there was one question that everyone was asking-who will the Queen marry? Most people believed it would be one of the

first things Elizabeth would do. They expected her to select a husband to help here run the country, and more importantly, to get her pregnant so that there would be an heir to succeed her.

Elizabeth was young and there were high hopes that soon England would have a royal family again. If Elizabeth died without having a child the future would be uncertain. Many feared that the rivalry for the crown would lead to civil war. In the early weeks of her reign there were many suitors for Elizabeth’s hand. Elizabeth was the most sought after women in Europe. She received offers of marriage from Kings, Princes and Dukes but whom should she marry?

Making the right choice of husband would not be so easy. Elizabeth did not want to repeat her sister’s mistake by marrying a man who would be unpopular with her people. What did Elizabeth need to think about when choosing a suitable husband?

1.King Philip II of Spain.Philip was a powerful Catholic. He had been married to Elizabeth’s half sister Mary. That marriage was so unpopular it had caused a rebellion.

2.King Eric of Sweden
Eric of Sweden was given a lot of thought by Elizabeth and her Ministers. Eric was a Protestant, he was also popular in the country, and when it was rumoured
that Elizabeth had accepted his proposal, medals were made in London with a picture of Elizabeth and Eric on them. But Eric was not rich and a marriage to him was of little benefit to England, as it did not give England a strong European ally.

But he was not of equal rank and would not give England a Foreign ally. There was also another problem. He was already married! He married a girl called Amy Robsart when he was Seventeen. If this wasn’t bad enough he was the son of a traitor and the grandson of a traitor. Treason

seemed to run in the family. Many English men believed he could not be trusted.

Things became worse when Lord Robert’s wife died in mysterious circumstances and there were rumours she had been murdered. Some even said that the queen had been involved in her death!

5. Francis, Duke of Alencon, later Anjou.
The only other serious contender for Elizabeth’s hand in marriage was Francis, Duke of Alencon, later Duke of Anjou. He was the son of Catherine de Medici, Queen Mother of France, and a brother to the French King. He was a lot younger than Elizabeth but marriage to him would bring England a good alliance. The French were Catholic, but did not appear to be as hostile to English Protestantism as the

Spanish were. Alencon himself was also known to have sympathy with the French Protestants and did not mind marrying a Protestant Queen. This was the most serious foreign courtship of Elizabeth’s reign, and it seemed that Elizabeth would marry him. Francis even came to England for Elizabeth to meet him. The Queen quite liked the Frenchman, who she called her “frog”, even though he was not good looking and had been scared by an attack of the small pox. Elizabeth announced before some of her courtiers that she would marry him, kissed him, and gave him a ring.