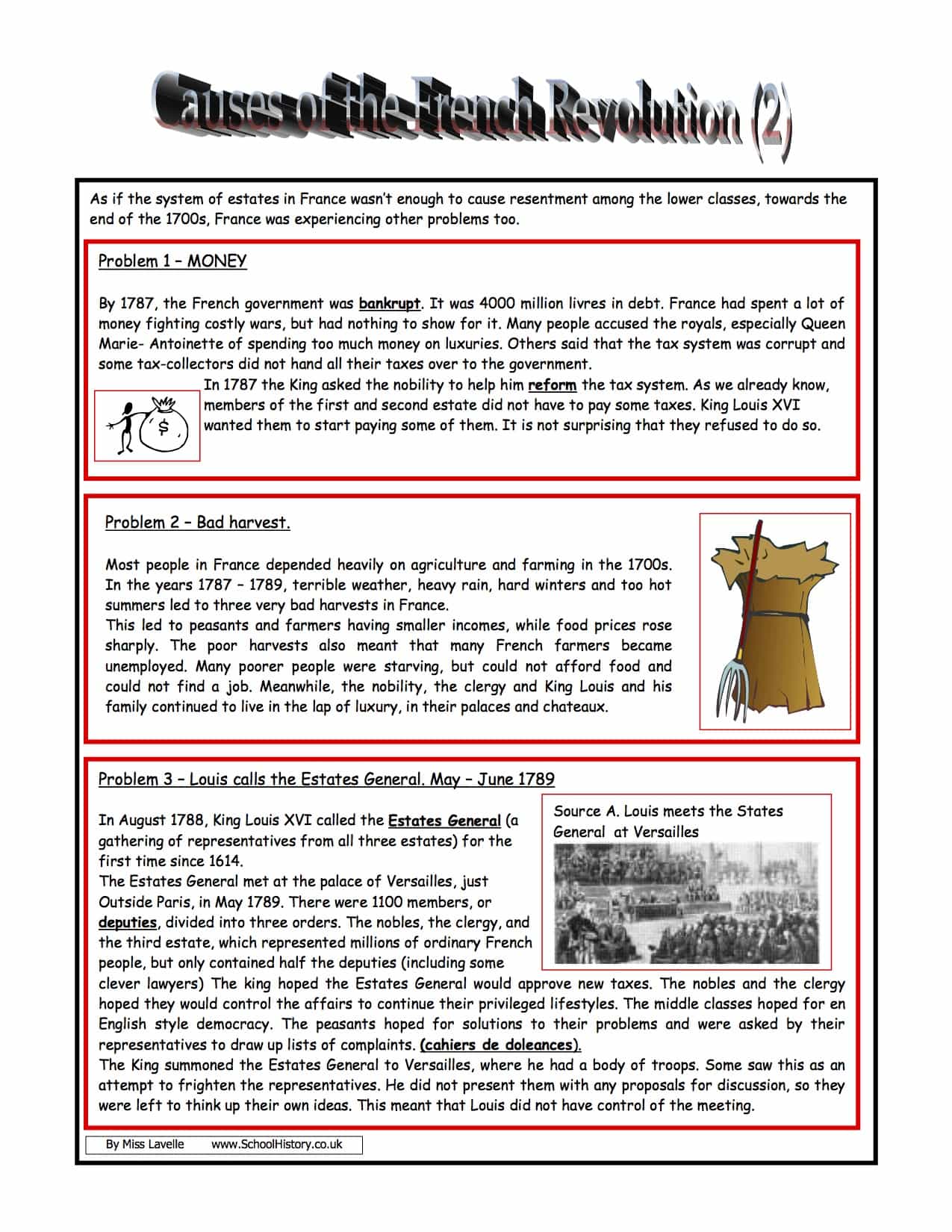 As if  the system of estates in France wasn’t enough to cause resentment among the lower classes, towards the end of the 1700s, France was experiencing other problems too.

By 1787, the French government was bankrupt. It was 4000 million livres in debt. France had spent a lot of money fighting costly wars, but had nothing to show for it. Many people accused the royals, especially Queen Marie- Antoinette of spending too much money on luxuries. Others said that the tax system was corrupt and some tax-collectors did not hand all their taxes over to the government.

In 1787 the King asked the nobility to help him reform the tax system. As we already know, members of the first and second estate did not have to pay some taxes. King Louis XVI wanted them to start paying some of them. It is not surprising that they refused to do so.

Most people in France depended heavily on agriculture and farming in the 1700s. In the years 1787 – 1789, terrible weather, heavy rain, hard winters and too hot summers led to three very bad harvests in France.
This led to peasants and farmers having smaller incomes, while food prices rose sharply. The poor harvests also meant that many French farmers became unemployed. Many poorer people were starving, but could not afford food and could not find a job. Meanwhile, the nobility, the clergy and King Louis and his family continued to live in the lap of luxury, in their palaces and chateaux.

In August 1788, King Louis XVI called the Estates General (a gathering of representatives from all three estates) for the first time since 1614. The Estates General met at the palace of Versailles, just Outside Paris, in May 1789. There were 1100 members, or deputies, divided into three orders. The nobles, the clergy, and the third estate, which represented millions of ordinary French people, but only contained half the deputies (including some clever lawyers) The king hoped the Estates General would approve new taxes. The nobles and the clergy hoped they would control the affairs to continue their privileged lifestyles. The middle classes hoped for en English style democracy. The peasants hoped for solutions to their problems and were asked by their representatives to draw up lists of complaints. (cahiers de doleances).

The King summoned the Estates General to Versailles, where he had a body of troops. Some saw this as an attempt to frighten the representatives. He did not present them with any proposals for discussion, so they were left to think up their own ideas. This meant that Louis did not have control of the meeting.

The deputies of the third estate, having grown tired of the arguments over how each order should vote, declared themselves a ‘national assembly’. They represented 96% of the population and felt that they were the ‘true’ parliament. They wanted to draw up a constitution showing how France was to be governed.

On June 20th, the members of this assembly met at the royal tennis court. They pledged an oath (The Tennis Court Oath) not to leave until the King agreed to meet their demands. He gave way and deputies of the first and second estates became part of the National Assembly.