Do you want to save dozens of hours in time? Get your evenings and weekends back? Be able to teach The First Estate to your students? 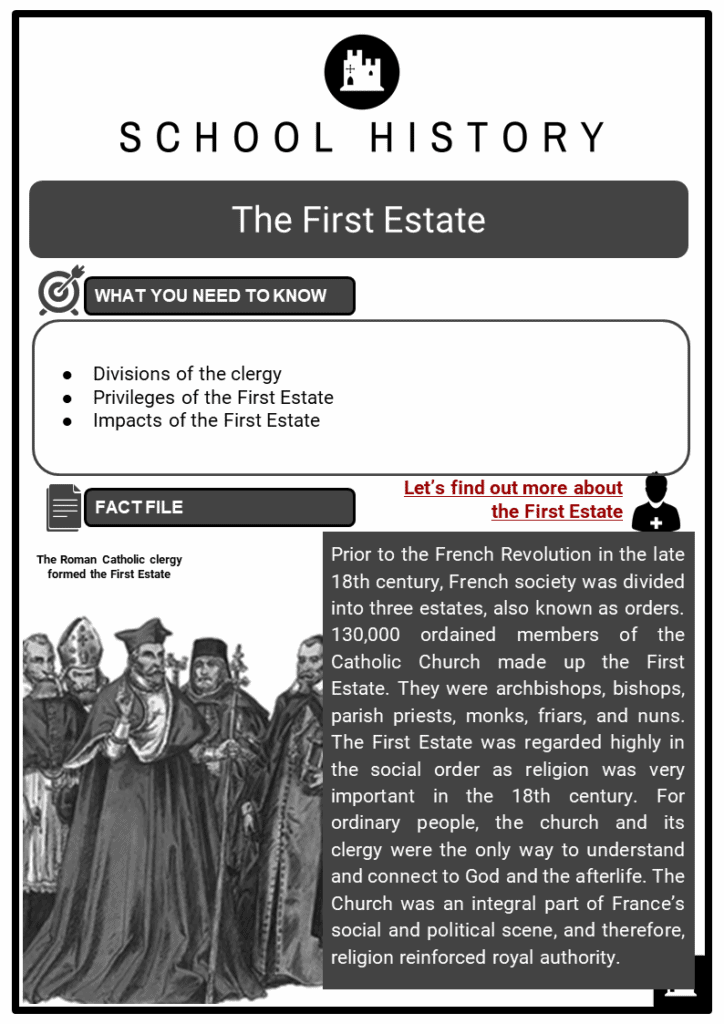 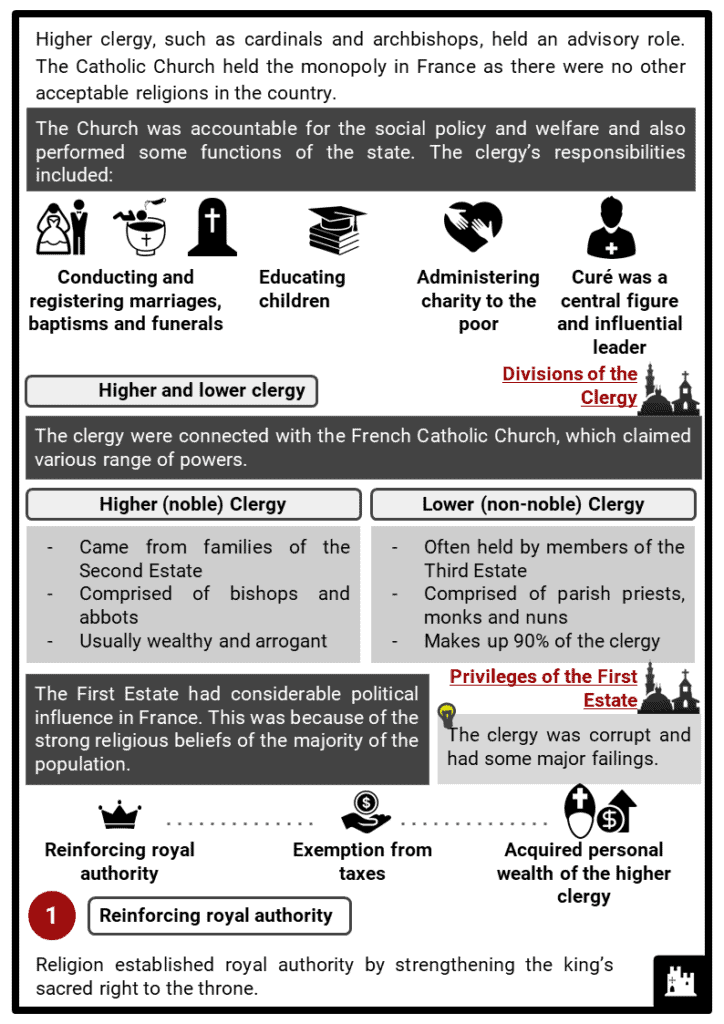 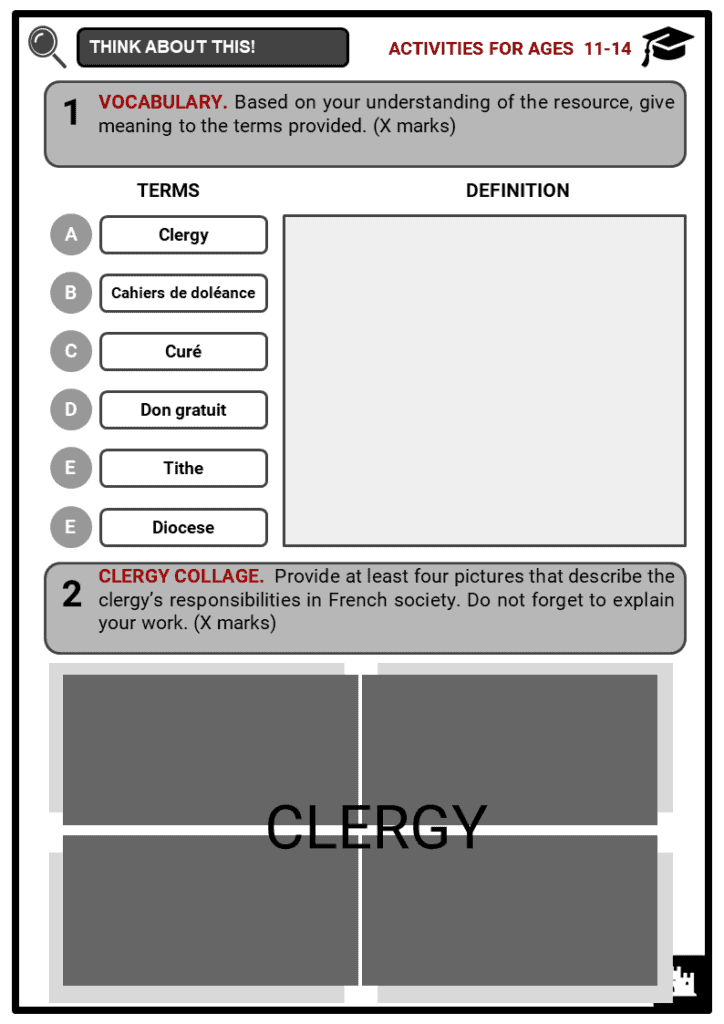 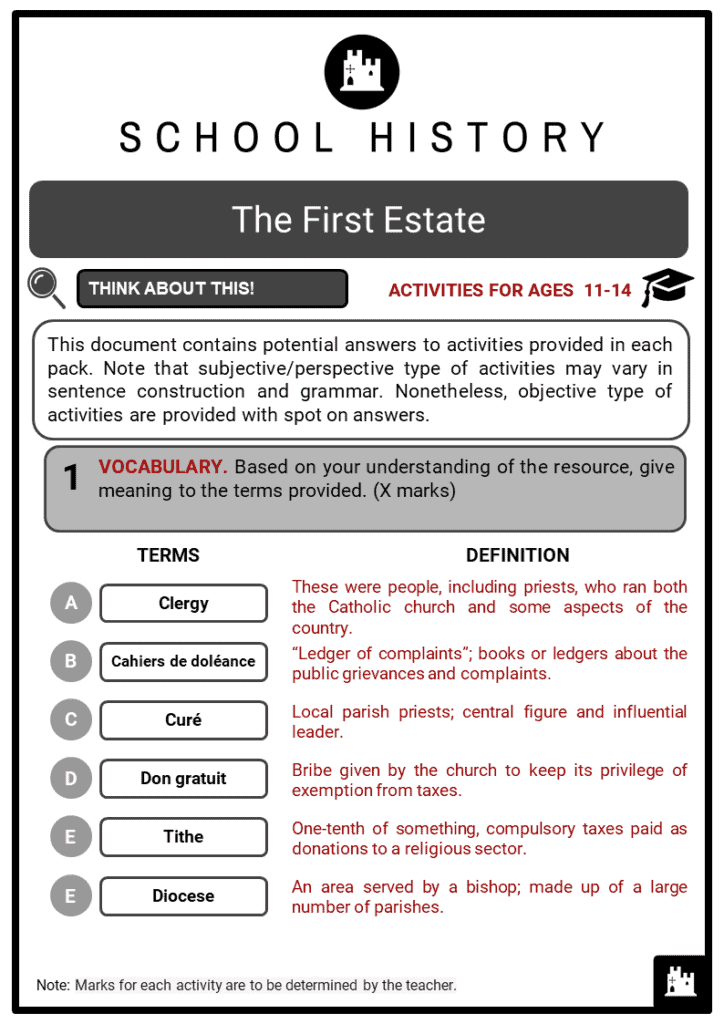 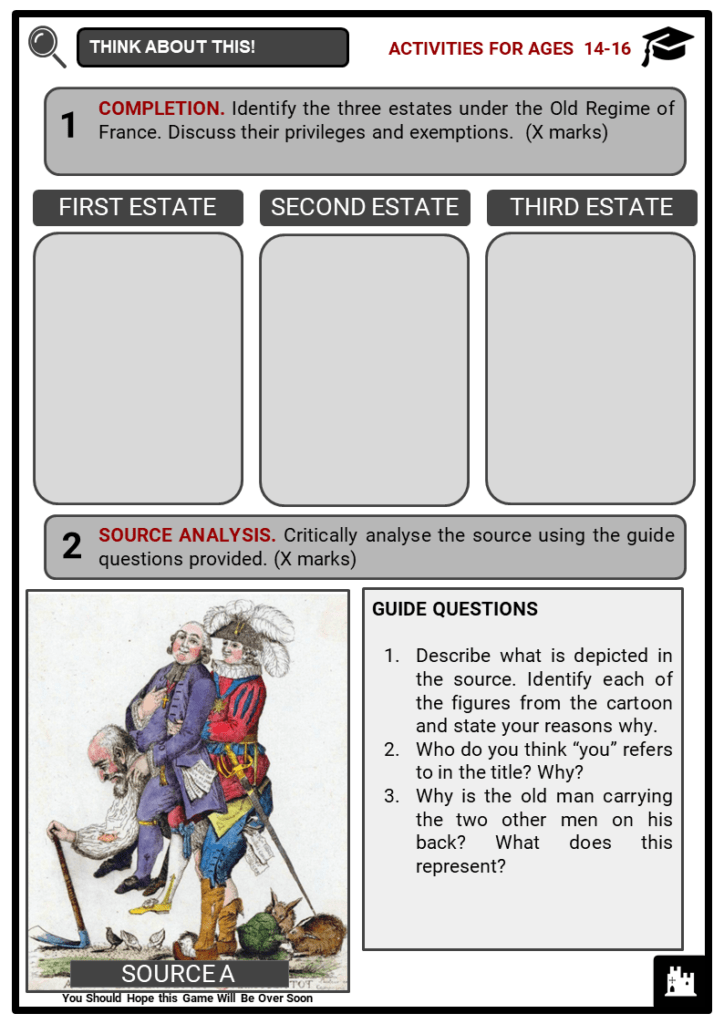 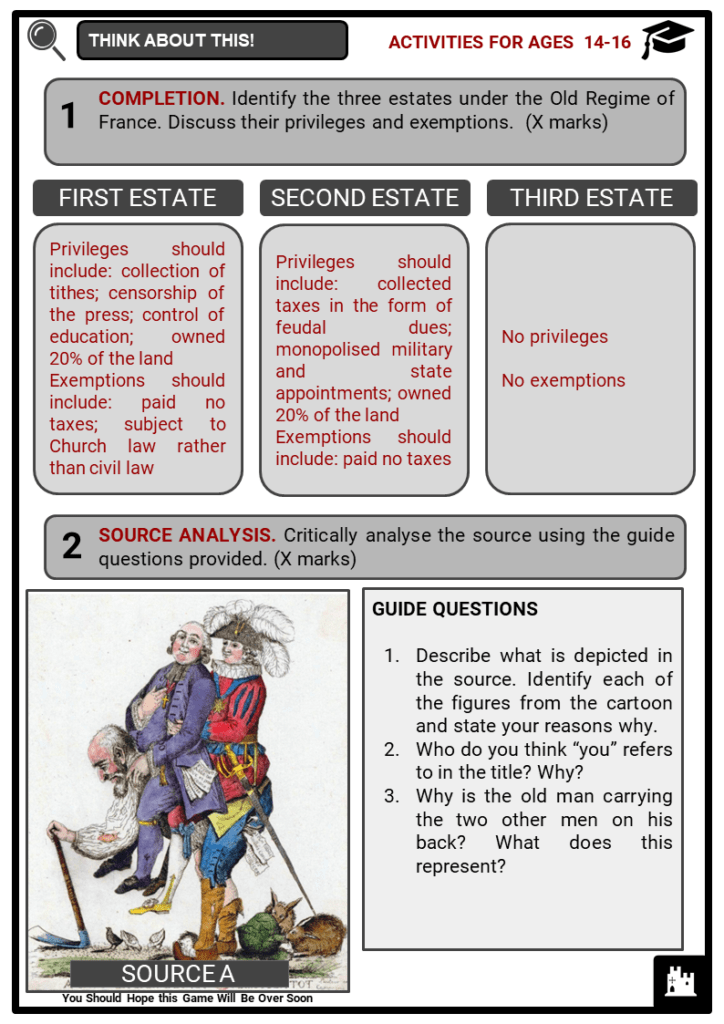 Prior to the revolution, French society was divided into three estates also known as orders. 130,000 ordained members of the Catholic Church were part of the First Estate. There were archbishops and bishops down to parish priests, monks, friars and nuns. The First Estate was regarded highly in the social order. Religion was very important in the 18th century, coupled with the belief of God. For ordinary people, the church and its clergy were the only channels for understanding or accessing God and the afterlife. The Church was, therefore, an integral part of France’s social and political scene. Religion reinforced royal authority and reminded the masses of the king’s divine right to the throne.

Higher clergy, such as cardinals and archbishops, held an advisory role. The Catholic Church was granted the status of being a monopoly in France as there weren’t any other acceptable religions in France. The Church was granted the responsibility of developing social policies and social welfare. It also had state authority to carry out some of its functions. The clergy also dealt with matters regarding marriage (that is conduction and registration), baptisms and funerals. They offered education to children and distributed charity to the poor. In the countryside, the local parish priest was known as both a central figure and an influential leader.

The status held by the Church enabled it to acquire vast amounts of wealth. Roughly 10 percent of all land in France belonged to the Church plus it collected revenue of around 150 million livres each year, mainly from tenant rents and tithes. Tithes were a compulsory donation considered as some sort of church tax paid by parishioners. The Church’s vast annual income continued to grow as it was exempt from state taxes. This exemption, however, had some problems. In the 17th and 18th centuries, the Church was faced with demanding government ministers that wanted it to contribute a greater share toward the running of the state. These demands translated into heightened tensions and fierce negotiations, especially in times of war when the government was raising funds for its military needs. As a compromise and appreciation, a voluntary gift called don gratuit was contributed by the Church leaders as payment that was to be made every five years. The First Estate was paying a don gratuit of between three and four million livres by the early 1700s, which were sizeable amounts in those times but still only around two percent of the Church’s total revenue. The don gratuit had effectively become a bribe, paid by the Church to retain its tax-exempt status.

The Church’s considerable wealth often accumulated at the top, in that most of the Church’s higher clergy – cardinals, archbishops and bishops – had gained significant levels of personal wealth from land rents, sinecures or simple graft, whereas the lower clergy was suffering and poor. These rich top clergymen lived an extravagant life full of opulence. This was different from those in the Second Estate. Noble titles granted as either gifts from the crown or purchased venally were given to around two-thirds of bishops and archbishops.

Church dioceses spent large amounts of money building and maintaining huge cathedrals, such as Val-de-Grace and Notre Dame in Paris. These buildings were architectural marvels as they overshadowed cities and towns, symbolising the church’s dominance over French society. Military service was a must but they were exempted from this national obligation. The judicial system was also applied differently when it came to the clergymen in the First Estate. Those accused of serious offences would only be tried in ecclesiastical courts, which were different from civil courts used for ordinary citizens.

The status held by the Church never came under any serious threat but was heavily criticised on several fronts by French society. A majority of French citizens were devout Christians and remained very religious but they could not help but feel dissatisfied and were the chief critics of the Church. This discontent was felt as the higher clergy placed their own personal interests first rather than the interests of God or the Church. Growing disenchantment and lack of trust in the Church was brewing. The number of people joining the priesthood or religious orders had decreased and at the same time, people who died did not leave their estates to the Church. This saw the rise of other religions including Freemasonry and other Protestant religions as a growing number of people drifted away from the Catholic Church. Some people just abstained from religion through religious apathy. Those who remained loyal wanted reforms and to get rid of corruption.

This rising dissatisfaction was contagious, and it soon spread to the lower clergy, mainly parish priests who were often disregarded and underappreciated by the higher clergy and poorly paid by the Church. All ordained persons belonged to the First Estate, but there was a range of political and theological viewpoints in their ranks. Around one-third of all clergy were parish priests or curés. Most of these priests were hardworking, compassionate, learned and respected by the people in their parish. During the 1700s, a gulf began to emerge between some priests, who lived among the poor of the Third Estate and were witness to their struggles, and the princes of the Church. 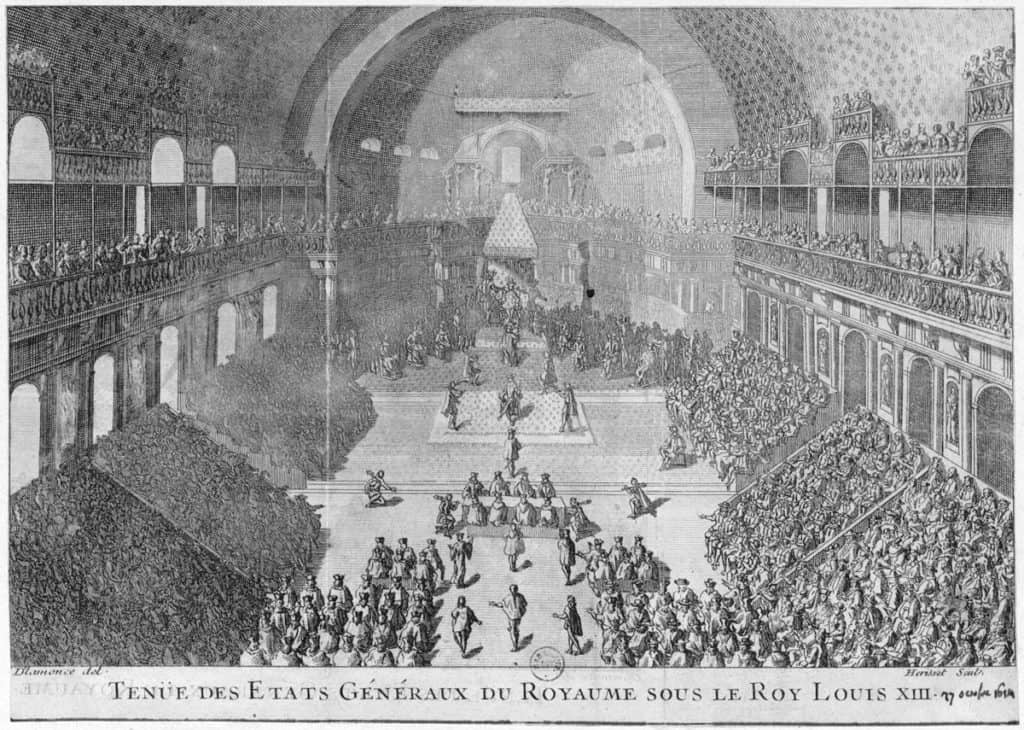 The summoning of the Estates-General in mid-1789 was welcomed by many priests as they were well-represented (208 of the First Estate delegates at the Estates-General were parish priests). They aired their views and called for democracy and consultation when it came to making decisions. They also wanted a review of the Church’s tax status. The liberalism of the lower clergy was reflected by their actions at the Estates-General when 149 of their deputies opted to join the Third Estate to form the National Assembly.