Do you want to save dozens of hours in time? Get your evenings and weekends back? Be able to teach Jim Crow Era to your students? 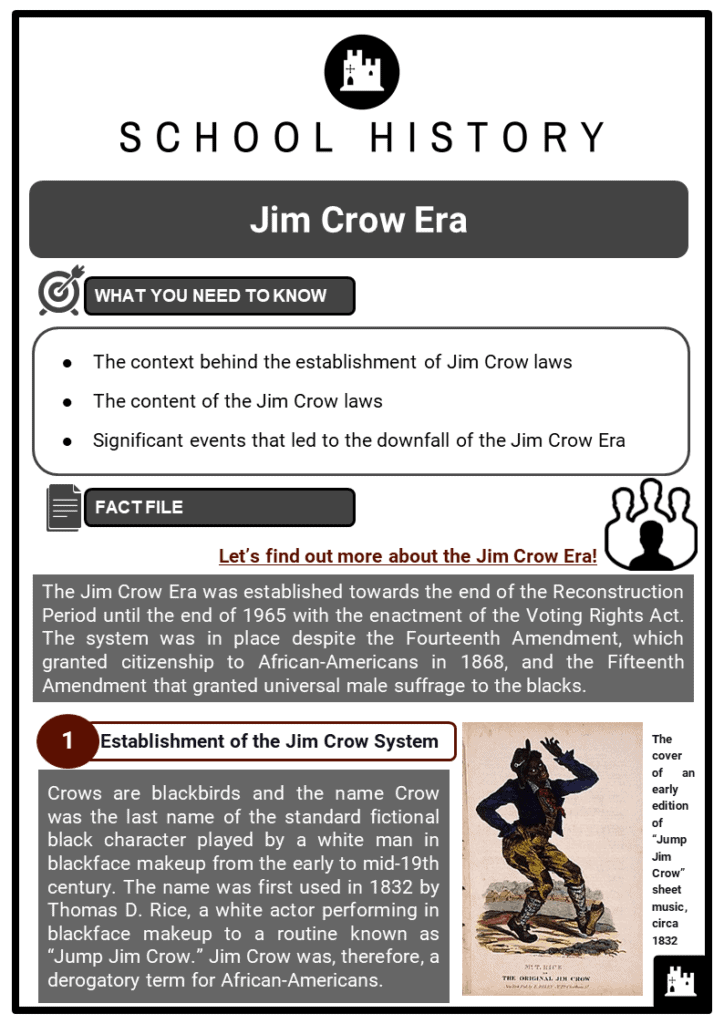 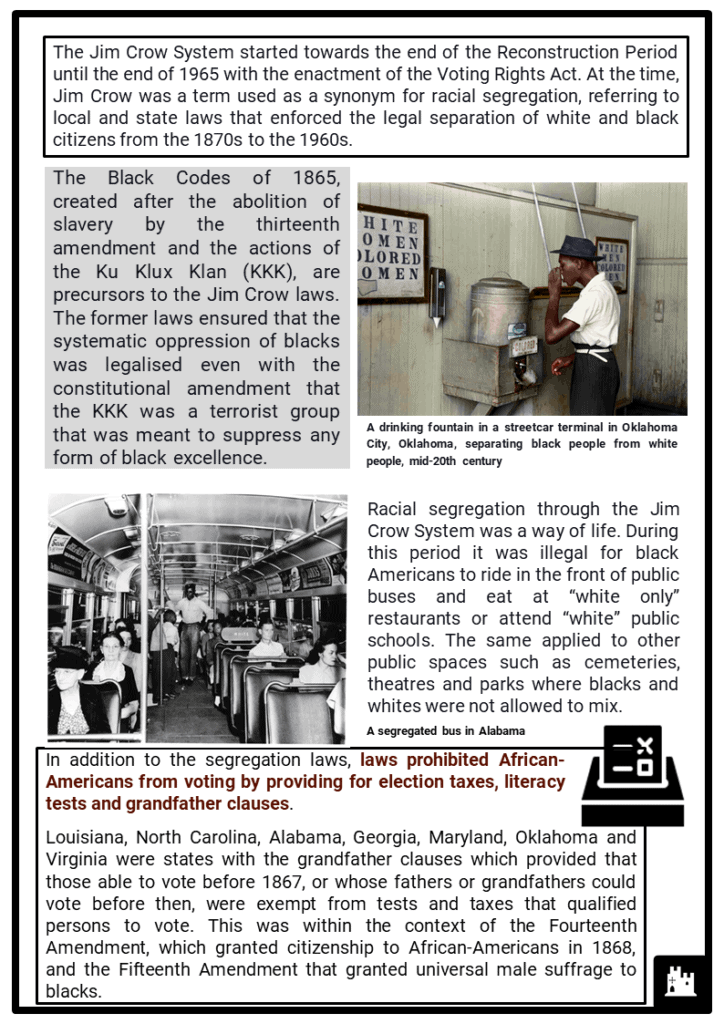 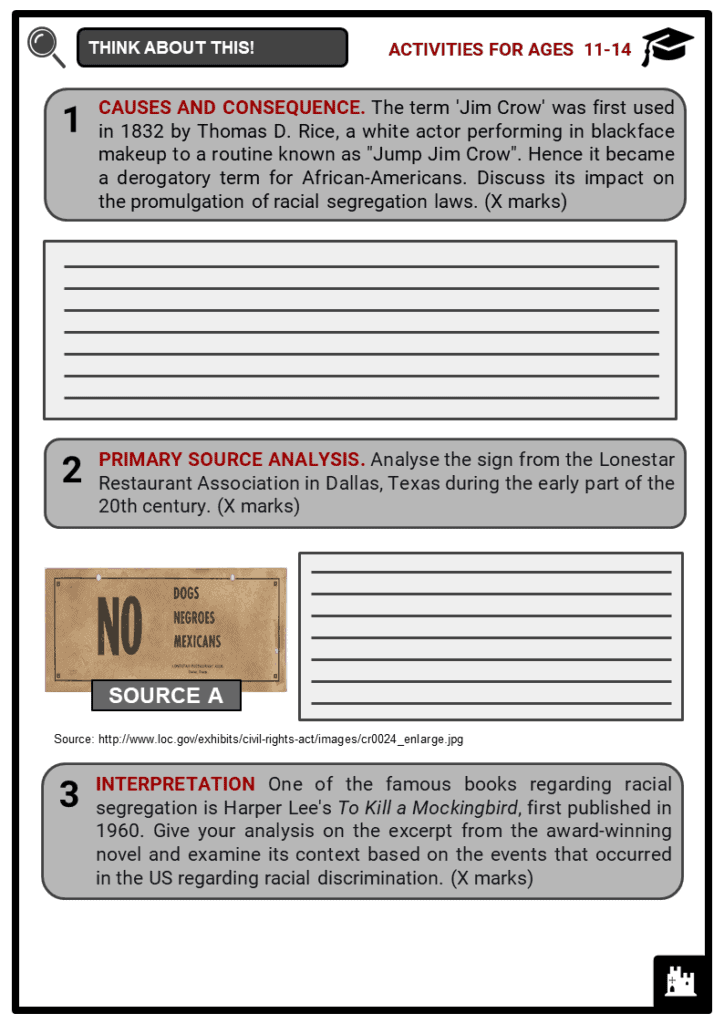 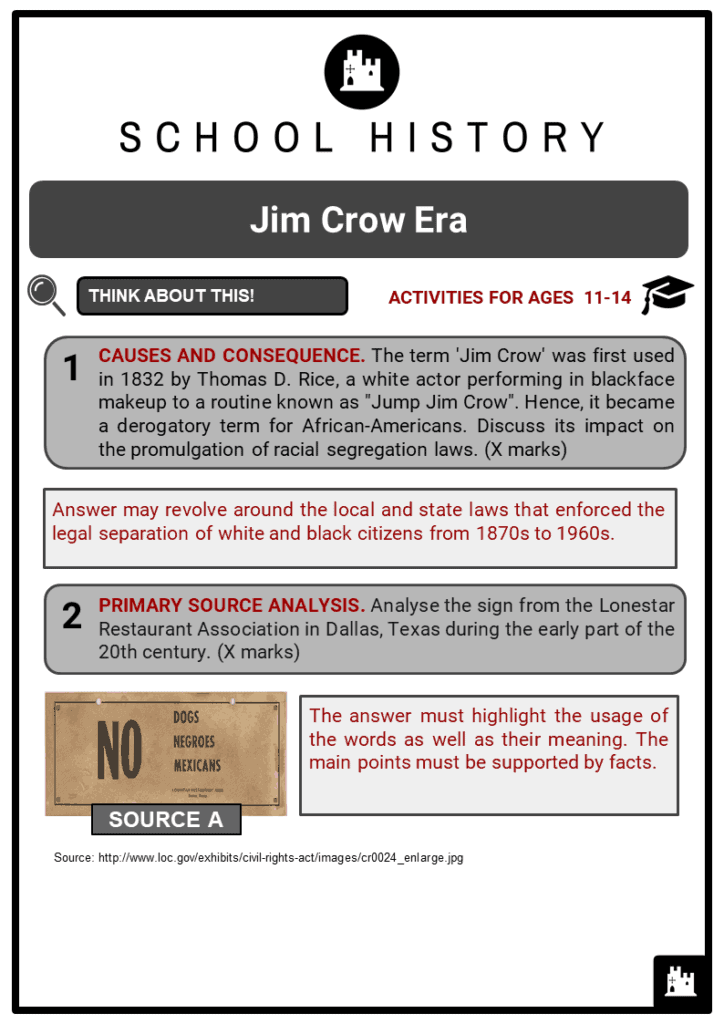 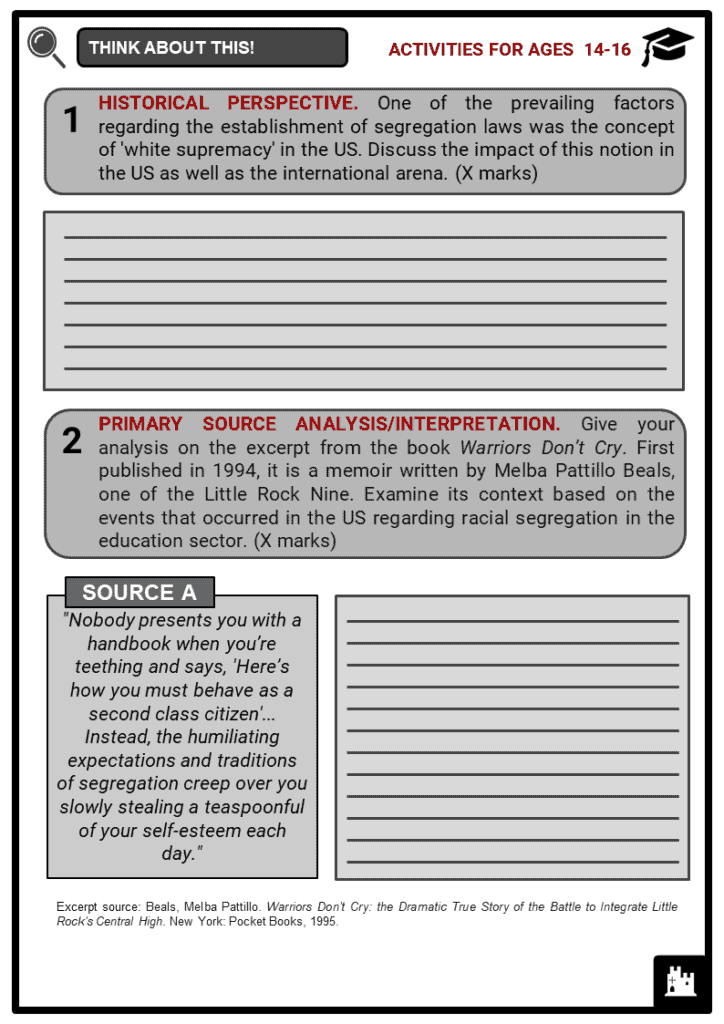 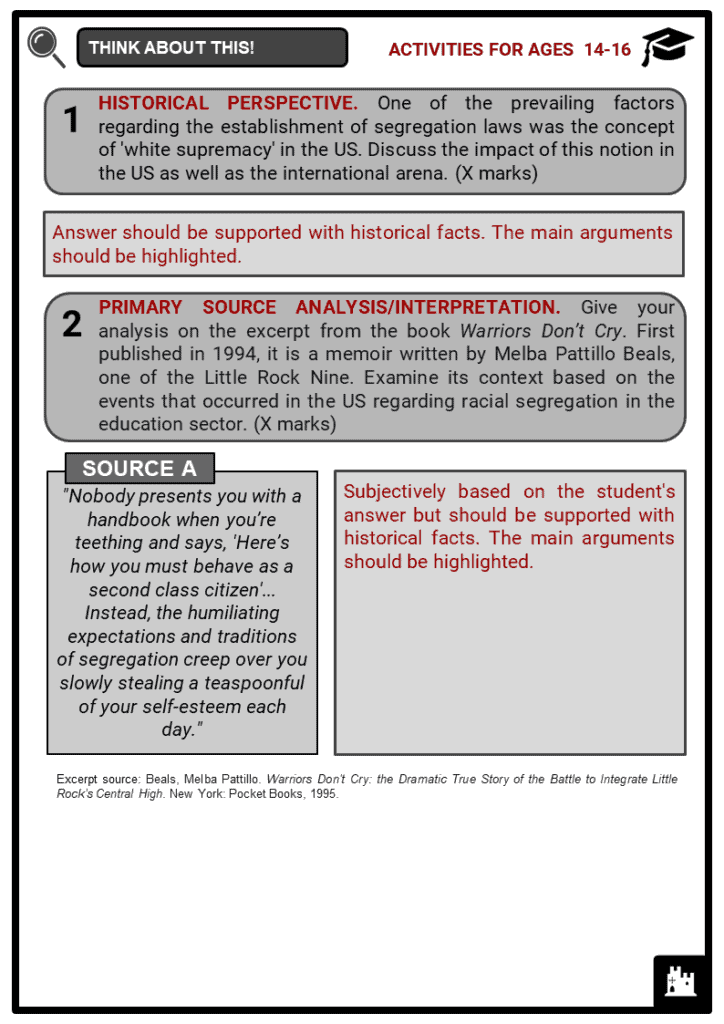 Establishment of the Jim Crow System

Crows are blackbirds and the name Crow was the last name for the standard fictional black character played by a white man in blackface makeup from the early to mid-nineteenth century. The name was first used in 1832 by Thomas D. Rice, a white actor performing in blackface makeup to a routine known as “Jump Jim Crow.” Jim Crow was, therefore, a derogatory term for African-Americans.

The Jim Crow system started towards the end of the Reconstruction Period until the end of 1965 with the enactment of the Voting Rights Act. Jim Crow is a term presently used as a synonym for racial segregation, referring to local and state laws that enforced the legal separation of white and black citizens from 1870s to 1960s.

The Black Codes of 1865, after the abolition of slavery by the thirteenth amendment and the actions of the Ku Klux Klan (KKK), are precursors to the Jim Crow laws. The former laws ensured that the systematic oppression of blacks was legalised even with the constitutional amendment that the KKK was a terrorist group that was meant to suppress any form of black excellence.

Racial segregation through the Jim Crow system was a way of life. During this period it was illegal for black Americans to ride in the front of public buses and eat at “white only” restaurants or attend “white” public schools. The same applied to other public spaces such as cemeteries, theatres and parks that required blacks and whites not to mix.

In addition to the segregation laws, laws prohibited African Americans from voting by providing for election taxes, literacy tests and grandfather clauses. Louisiana, North Carolina, Alabama, Georgia, Maryland, Oklahoma and Virginia were states with the grandfather clauses which provided that those able to vote before 1867, or whose fathers or grandfathers could vote before the state time, were exempt from tests and taxes that qualified persons to vote. This was within the context of the Fourteenth Amendment, which granted citizenship to African Americans in 1868 and the Fifteenth Amendment that granted universal male suffrage to blacks.

The social implication of the laws meant that blacks were also required to act in a subversive manner, reflecting their supposed inferiority to whites. Black businessmen would often find their businesses razed to the ground by jealous white folk. Black men were also hanged for having romantic relations with white people, and black women were expected to step off the sidewalk for a white person to pass. The blacks were also denied the space to express any form of black pride.

To escape the harsh segregation laws in the South, blacks continued to move to the northern and western part of the US. However, they were faced with other laws and attitudes that barred blacks from forming and joining specific types of unions or finding employment in industries that were the preserve of white employees.

Notwithstanding the discrimination, in 1896, African American women established the National Association of Coloured Women that advocated for women suffrage and the progression of other forms of civil rights. In 1905, W.E.B Du Bois and William Monroe Trotter stabled the Niagara Movement that mobilised blacks all over the country to fight against racial inequality. The Niagara Movement went on to become the National Association for the Advancement of Coloured People (NAACP) that fought against social and racial bias through legislative advocacy, court cases and public protests.

The Fall of the Jim Crow System

The black community put up a spirited campaign against the segregation laws, taking apart the Jim Crow system little by little. In 1887 the first black settlement was established in Mound Bayou, Mississippi by Isaiah Montgomery. Together with other blacks and former slaves, Montgomery cleared the land and created a peaceful community.

In 1892, Homer Plessy was arrested for boarding a white only compartment on a train and arrested upon refusal to move to the coloured section. The matter, as was initially intended by Plessy, found its way to the US Supreme Court in 1896, challenging the constitutionality of the segregation laws in Louisiana, contrary to the Fourteenth Amendment.

The Supreme Court held that the segregation laws did not violate the Fourteenth Amendment as long as the separate accommodations for whites and blacks were equal. Justice Henry Brown summarising the majority ruling implied that the black people's perception of inequality in the segregation laws was based on their inferiority complex and not the rules themselves.

In 1901 Charlotte Hawkins Brown founded the first black school in North Carolina by fundraising among the black community, after the government withdrew funding for the Alice Freeman Palmer Memorial Institute.

Franklin D. Roosevelt enacted the Fair Employment Act through a 1904 Executive Order 8802 that dealt a significant blow to the Jim Crow system. The primary objective of the regulation, passed during the Second World War, was to desegregate employment in war industries following pressure from Civil Right groups under the leadership of A. Philip Randolph.

In 1947, Jackie Robinson joined the Brooklyn Dodgers, and in the following year, President Truman issued an executive order ending desegregation in the armed forces. In 1954, in the case of Brown vs Board of Education of Topeka, the Supreme Court found that segregated facilities were “inherently unequal” effectively overturning the Plessy decision.

In 1955 Rosa Parks, a seamstress and the NAACP secretary, refused to give up her seat on a public bus, leading to the Montgomery Bus Boycott which lasted over a year, giving rise to the modern Civil Rights Movement.

In 1960 Congress for Racial Equality (CORE) and the Student Nonviolent Coordinating Committee (SNCC), focused on organising peaceful opposition to racial discrimination laws and attitudes throughout the US. In 1964, 1965, and 1968 the Civil Rights Act, the Voting Rights Act and the Fair Housing Act respectively were enacting, bringing an end to the Jim Crow system.