Do you want to save dozens of hours in time? Get your evenings and weekends back? Be able to teach Causes of the Cold War to your students? 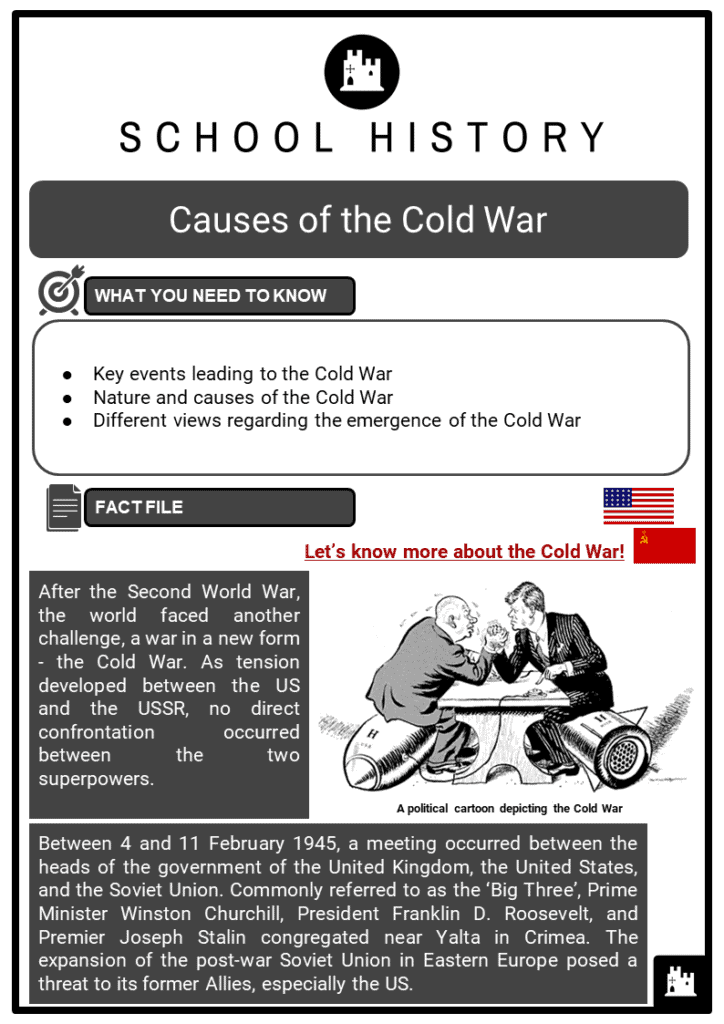 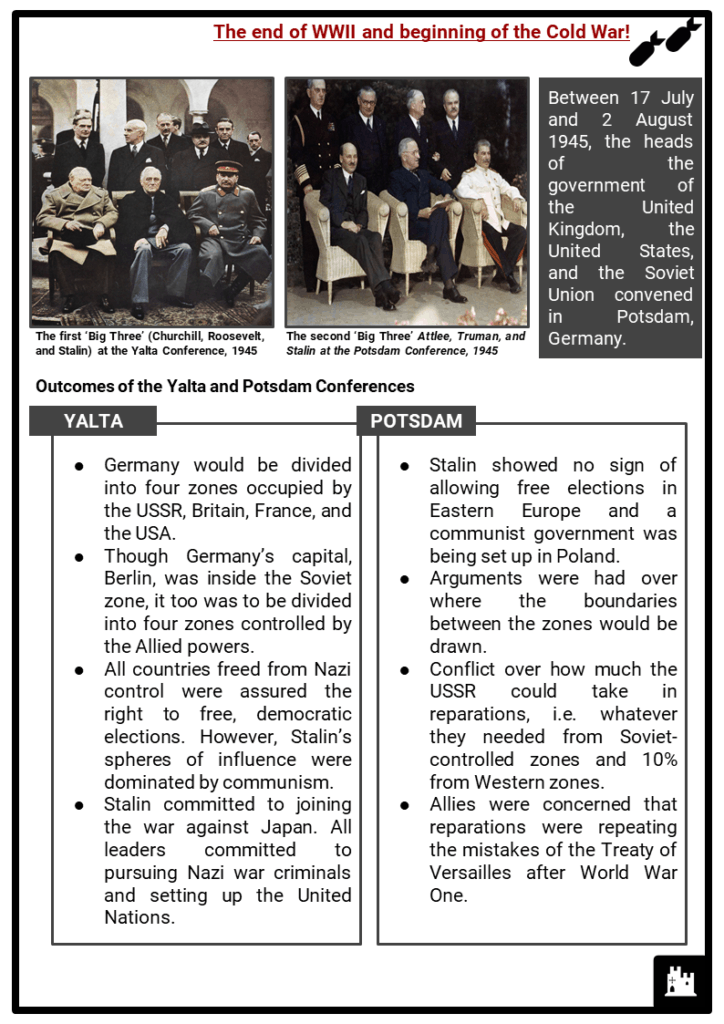 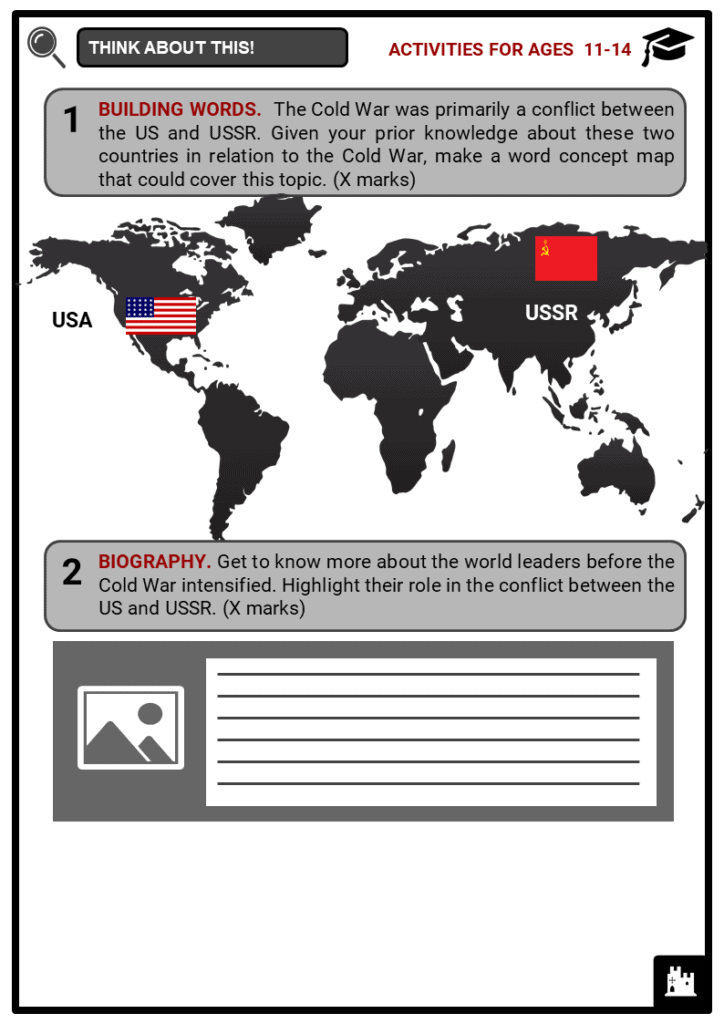 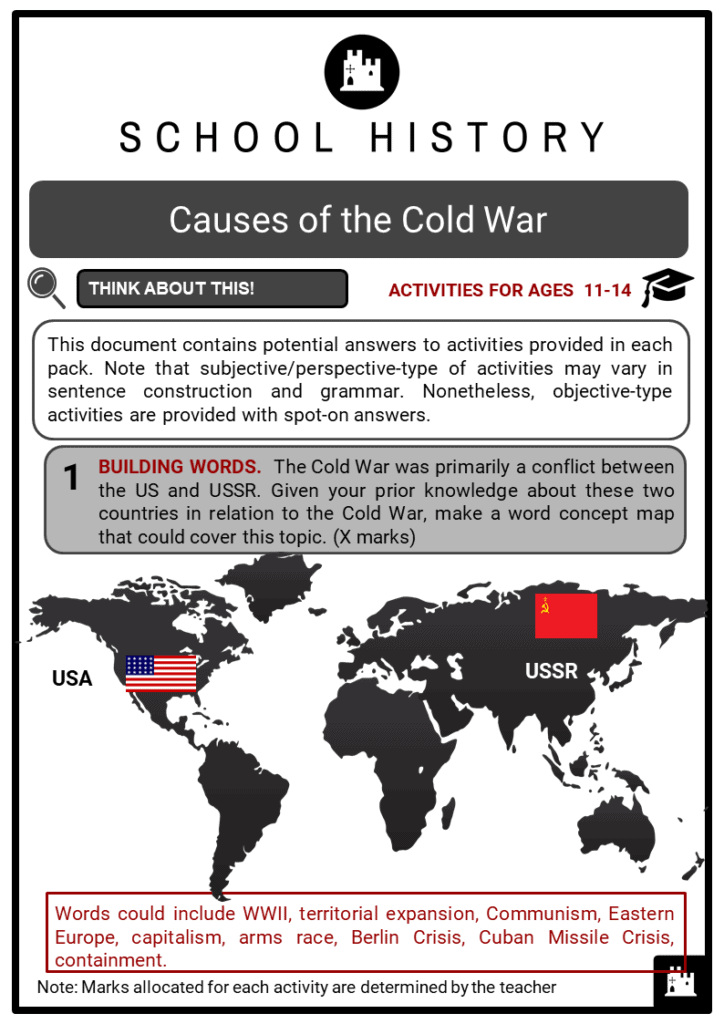 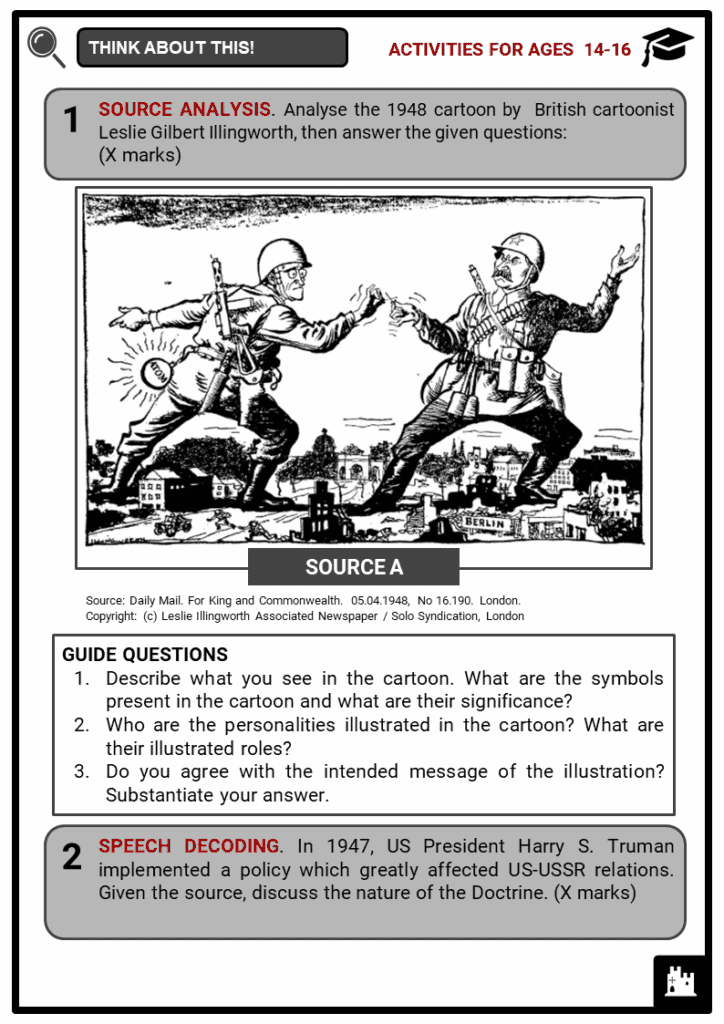 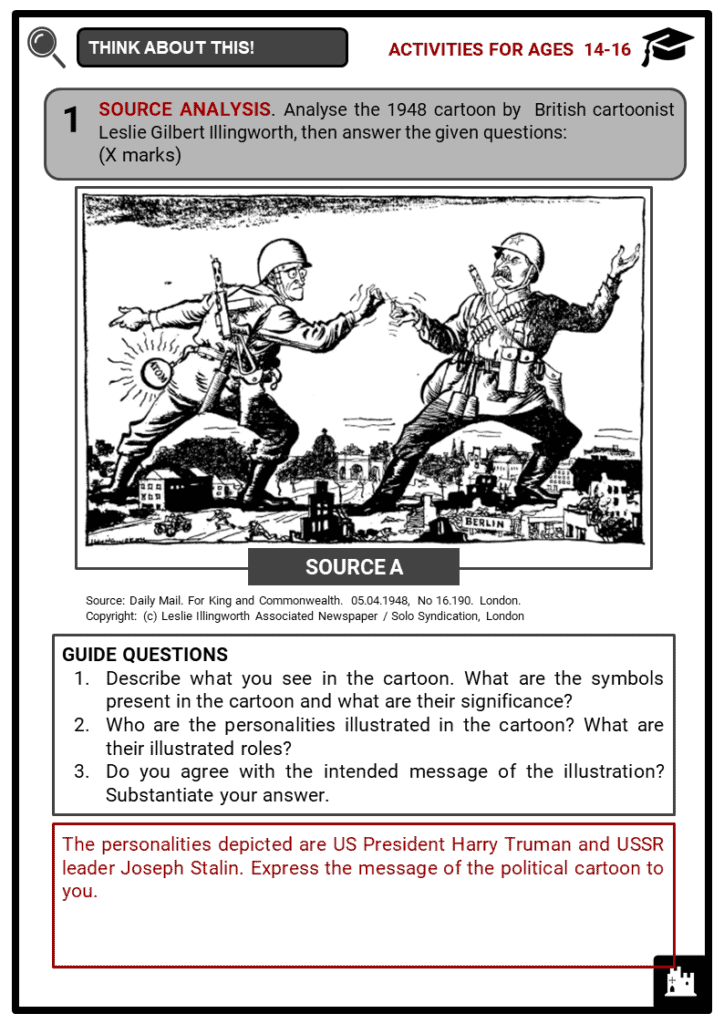 The onset of the War

Winston Churchill, Franklin D. Roosevelt and Joseph Stalin were engaged in a number of deliberations before the onset of the Cold War. The President of the U.S.A. during World War II, Franklin D. Roosevelt, saw that their alliance with the Soviets was crumbling but also knew that they had to stay allies until the end of the war. They managed to compromise and sort out their differences. When signs of the war being over emerged, more and more cracks appeared in the alliance until it finally split apart and the once-allies of the war became enemies.

The major differences were that the Soviet Union was a communist country, which was ruled by a dictator who put the needs of the state ahead of personal human rights, whereas the U.S.A. was a capitalist democracy, which valued personal freedom and feared communism. This signalled the start of the Cold War.

The American way of life was, and is, based upon the will of the majority, and is distinguished by free institutions, representative government, free elections and guarantees of individual freedom, freedom of speech and religion, and freedom from political oppression. The communist Soviet way of life, however, was based upon the will of a minority, the state, forcibly imposed upon the majority. It relied upon terrorising and oppressing citizens, which was made possible through a controlled press and rigged elections.

These differences in ideologies, plus the countries involved resenting each other historically, resulted in a series of events that led to the collapse of the alliance and turned the allies of the war into enemies.

This was highlighted by the Cuban Missile Crisis that involved a political and military standoff. As part of the deal, America secretly agreed to remove nuclear weapons in the form of missiles from Turkey. These weapons were originally placed there to ward off any invasion attempts from the Soviets. The Soviet Union would also publicly remove missiles it had placed in Cuba.

Poor relations between the United States and the Soviet Union escalated even further when the Land-Lease was abruptly terminated by the United States and Russia’s request for American economic aid for the purposes of post-war reconstruction fell on deaf ears. During the Second World War, the U.S. supplied much-needed war material to Allied nations through the Lend and Lease programme and this abrupt refusal did not go down well with the Russians.

Proxy wars didn’t necessarily cause the Cold War but worsened it. The two superpowers often wrestled for superiority when it came to third world countries, supporting proxy wars in which they typically supplied and advised opposing factions in civil wars, including the Vietnam War to the U.S. backing the Ethiopian government and the Soviets going with next-door rival Somalia in the 1970s. This goes to show that their alignments were often arbitrary.

The Soviet Union was extremely concerned about its security after being invaded twice in the twentieth century. In 1945, America created and used the atomic bomb against Japan and the USSR was determined to create one of its own. Both the USSR and the U.S.A. built up huge arsenals of Inter-Continental Ballistic Missiles (ICBMs). The United States tested a hydrogen bomb in 1952 and in November 1955, the USSR developed one too. After that, the U.S. moved its bombers into Europe. In 1955, West Germany was allowed to re-arm and join NATO. Russia responded by forming the Warsaw Mutual Defense Pact with its buffer zone neighbours.

Even before the end of the Second World War, the Soviet Union had gradually extended her influence in Europe. As the war was drawing to a close in May 1945, the Soviet Union quickly solidified her control of Eastern Europe. The Red Army began by influencing the post-war elections. Although the non-communists could still gain some votes, most of the votes went to the communists as the elections were neither free nor fair. Many politicians in the United States had high hopes of America working with the Soviet Union after the war and did not advocate strong resistance against Russian expansion, but this soon changed. The U.S. government now favoured a policy of strong resistance against Russia.

The Soviet Union and the West also formed political alliances to combat the opposing side. Western Europe and the United States, through NATO, formed a military pact. The Soviet Union created a similar pact, the Warsaw Pact, between the states within the Soviet Union.

The Soviet Union could not forget that, in 1918, Britain and the U.S. had tried to destroy the Russian Revolution. Britain and the U.S. could not forget that Stalin had signed the Nazi-Soviet Pact with Germany in 1939. Neither side trusted the other. Because they were so different, each side saw each event differently and believed they were in the right. So every action they took made them hate each other more.

This ensued even after the war ended as various historians argued their different points of view.

Most Russian historians blame the British Prime Minister Winston Churchill and the American President Truman. They state that Truman and Churchill instigated the war and wanted to destroy the USSR, which was just defending itself.

At first, western writers blamed Russia. They said Stalin was trying to build up a Soviet empire.

This view was developed by Western historians who blamed America, citing their main reason as Truman’s lack of understanding of how much Russia had suffered in the Second World War.

This view was developed by historians with an element of neutrality. They stated that both sides were to blame for the war and that there was hatred on both sides.

Modern historians agree, however, that the Cold War was primarily a clash of beliefs - mainly communism versus capitalism. The Soviet Union wanted to spread its ideology of communism worldwide, which antagonised the Americans who believed in democracy. The acquisition of atomic weapons by America caused fear in the Soviets. Both countries feared an attack from each other and built up counter-measures.