Do you want to save dozens of hours in time? Get your evenings and weekends back? Be able to teach Manchurian Crisis to your students? 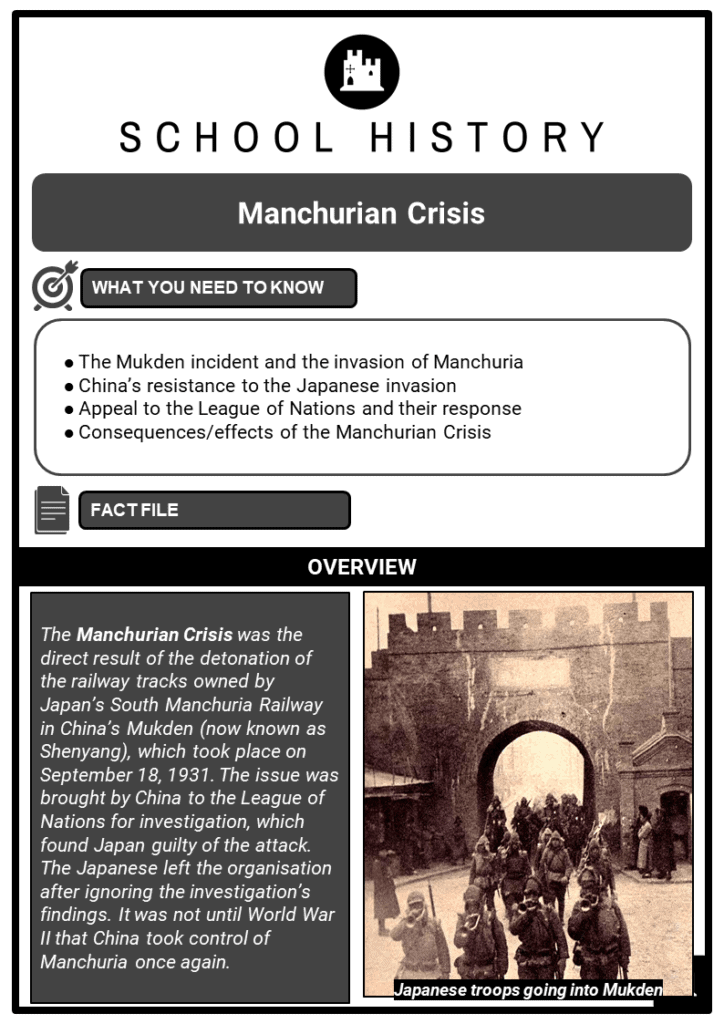 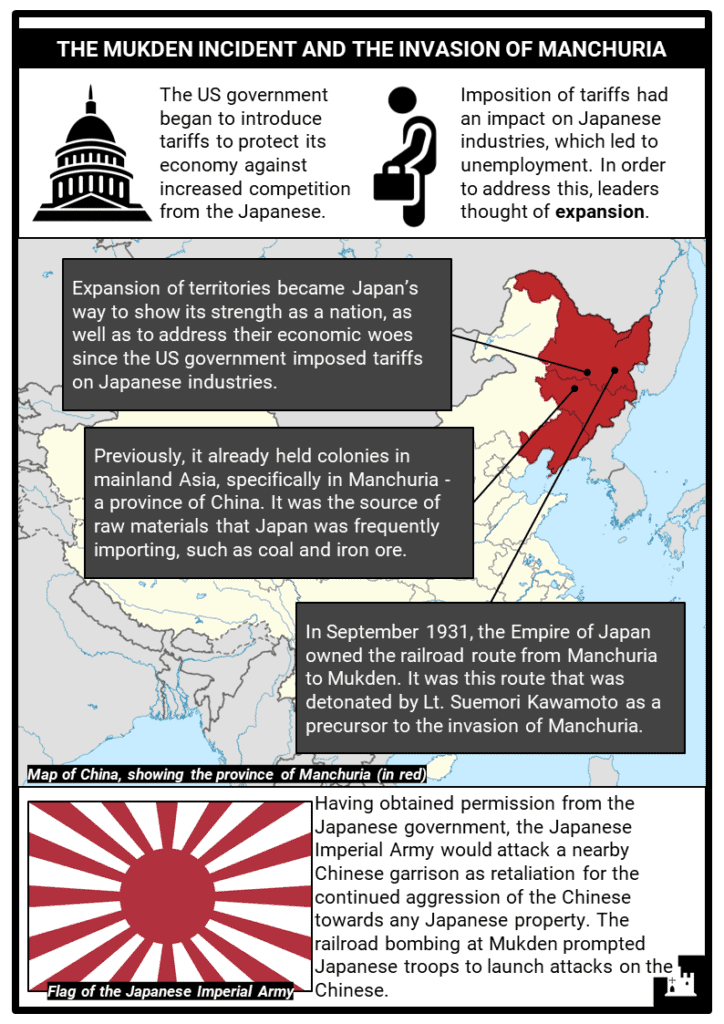 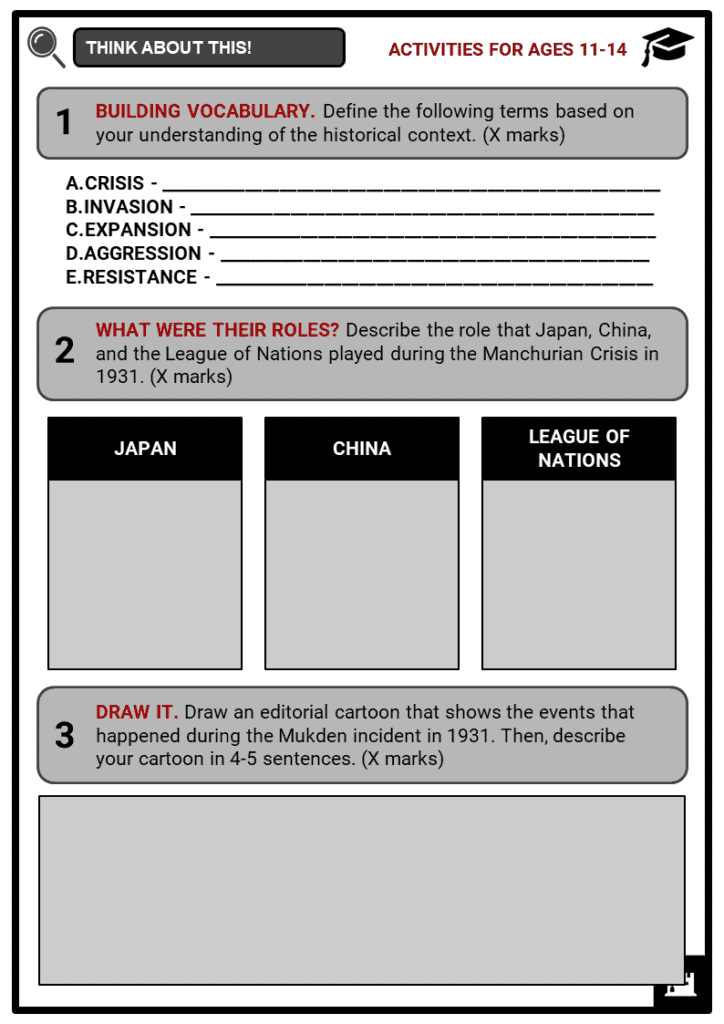 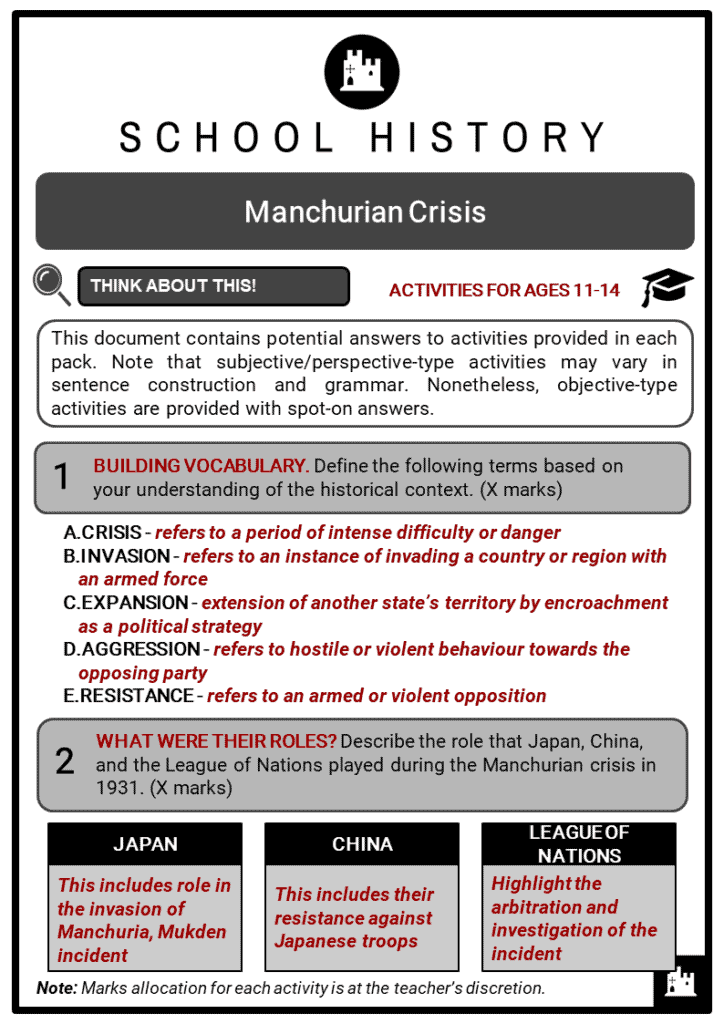 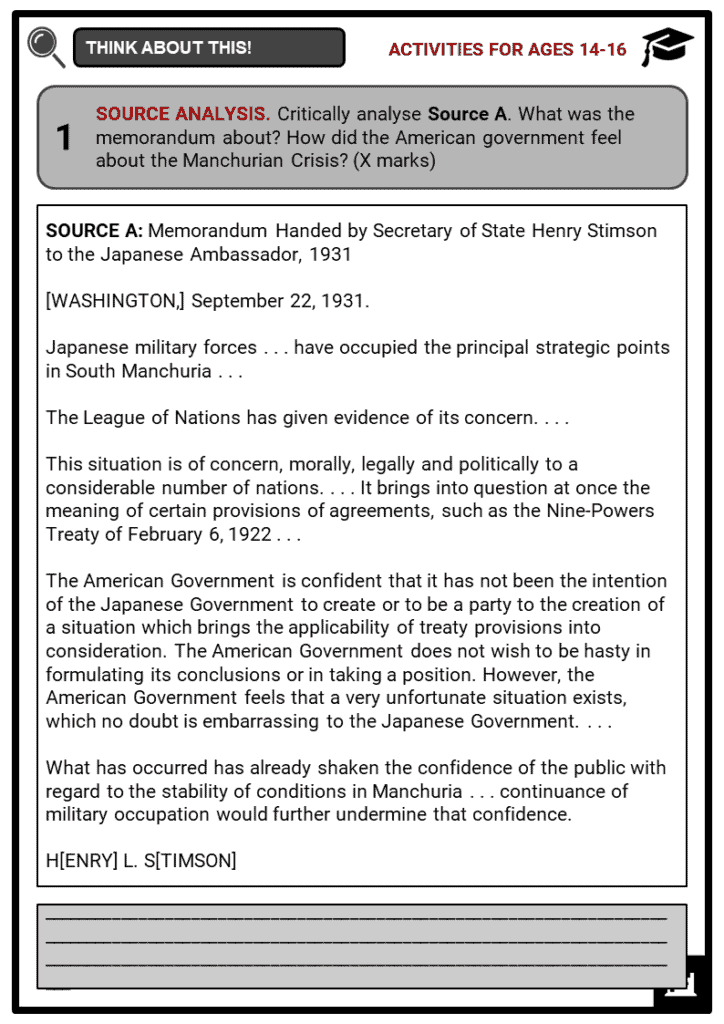 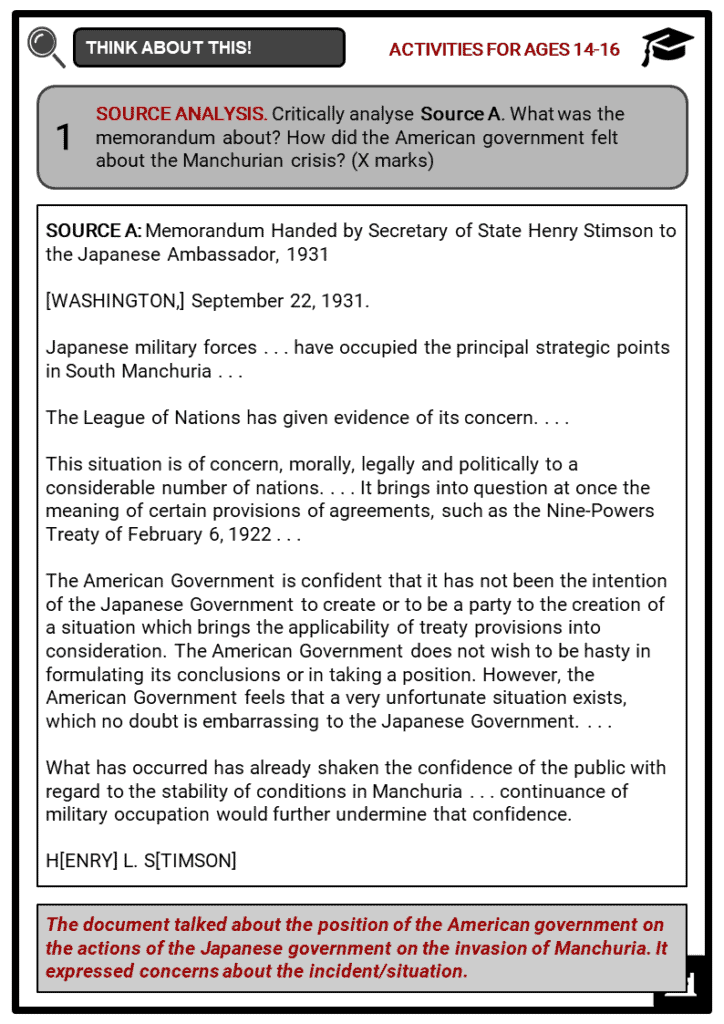 The Mukden (or Mukden or Manchuria) incident took place on September 18, 1931, in South Manchuria. It occurred when a section of railroad belonging to the South Manchurian Railway Company of Japan, near Mukden (now Shenyang), was destroyed. This attack was planned by the Japanese fearing a unification of China under the leadership of the Kuomintang, perceived as a threat against the Japanese establishment in the region.

The Japanese military accused the Chinese of perpetrating the attack, thus giving the pretext for the immediate invasion of southern Manchuria by Japanese troops. This resulted in the creation of the puppet state of Manchukuo a few months later, under the theoretical authority of the ex-emperor of China, Puyi.

This "provoked" incident was not unique. Similar processes were used under the leadership of General Tanaka between the late 1920s and the invasion of the rest of China to try to justify Japanese expansionism in Asia.

In China, this incident was known as the incident of 9.18, or Li Tiao Gou incident.

After the Russo-Japanese War (1904 - 1905), the Japanese Empire replaced the Russian Empire as the dominant power in Manchuria. The Japanese policy on China was confrontational throughout the 1930s. Until the establishment of the Imperial Headquarters in 1937, the Japanese Kantogun Army had some independence in Manchuria and northern China, both concerning civilian government and military authority in Tokyo.

At the time, Emperor Shōwa and his advisers debated whether they should conquer China militarily and establish a colonial-style power, or subjugate China economically. The Japanese government wanted to maintain the fragmentation of China, enabling them to deal with the different Chinese factions, which were in open conflict with each other. For example, Japan's intervention in the Jinan incident against the Kuomintang in its northern expedition in 1928 to prevent a unification of China.

The goal of the young Japanese officers in Manchuria was to give a pretext justifying the Japanese military invasion and the replacement of the Chinese government in the region by a Japanese or puppet government. They chose to sabotage a section of the railway near Liutaio Lake.

This area did not yet have an official name and was of no military significance for either side, but it was eight hundred meters from the Chinese garrison of Beidaying, stationed under the command of the young Marshal Zhang Xueliang. The plan was for the explosion to attract the attention of Chinese troops and then blame them for it as a pretext for a formal Japanese invasion.

To make the sabotage look more convincing as a Chinese attack on a Japanese transport system and thus mask their intervention as a legitimate measure of protection of a railway of industrial and economic importance, the Japanese named it the Liutaogou site, or Liu Xiao Qiao, which means Liutaio Trench and Liutaio Bridge. In reality, the site was only a portion of the railway on a section of flat land. The location of the explosion allowed for minimal damage (and therefore minimal repairs), in contrast to the consequences of choosing a bridge.

It appeared that the direct initiative came from two officers, Colonel Seishirō Itagaki and Lieutenant Colonel Kanji Ishiwara of the Shimamoto Regiment, in charge of guarding the railroad, and sappers placed the explosives under the rails.

At approximately 10:20 pm, on September 18, the charge was detonated. The explosion was minor, and only a 1.5-meter section on one side of the track was damaged. In fact, a train from Changchun passed over the very site of the explosion without any problem and reached Mukden at 22:30.

Immediately after the explosion, the Japanese surrounded the nearby Chinese garrison and attacked the troops stationed there under the pretext that any Japanese property should be protected from the onslaught of Chinese troops.

"There was no doubt that the Japanese government, faced with a fait accompli, was powerless. The prime minister explained to the ruler that he had ordered the Guandong army to return to its bases. For his part, the Minister of War, Minami, sent "a telegram to Mukden in which he approved the action [...] but also wished that the case did not take another scale".

The Guandong army activists decided to override it, and it was on their own initiative that they launched the Changchun offensive on the 20th of the month, triggering the invasion of Manchuria. The military had prevailed over civil power, a situation that announced growing pressure of the military on civilians during the 1930s (assassination of the Prime Minister in 1932, coup attempt of 26 February 1936), until the Second World War.

Within a few days, the three provinces of Heilongjiang, Jilin, and Liaoning (where Mukden is located) were taken by the Japanese. On November 20th a conference of the Chinese government was set up. The Guangzhou faction of the Kuomintang insisted that Chiang Kai-shek resign because of the failure in Manchuria and the lack of serious resistance from Chinese troops. Chiang resigned on December 15th. Sun Ke, son of Sun Yat-sen, took the post of President of the Republic of China and vowed to defend Jinzhou, another city of Liaoning, quickly lost in January 1932.

"If there was no doubt that the conspirators launched the incident on their own initiative, the Japanese Government, and the Emperor himself, should not have delayed to consider the new situation in Manchuria with serenity"  and to resume to their account the consequences of the invasion of Manchuria. On February 18 1932, the state of Manchukuo was proclaimed on the territory of Manchuria with Hsinking as its capital. Formally independent, it was in fact only a Japanese protectorate. The instigators of the operation were promoted, demonstrating that if the military conspirators had acted on their own initiative, they had done so in a larger Japanese context, favourable to a policy of power on the Asian continent.

The Japanese empire pursued its expansionist policy in China, triggering in 1937 the second Sino-Japanese War and in 1939 a failed attack on pro-Soviet Mongolia at the Battle of Khalkhin Gol.

The government of Manchukuo remained in place under Japanese administration until 15 August 1945, a few days after the outbreak of the Soviet invasion of Manchuria.

Various opinions still exist today about who dropped the bomb in Mukden. An exhibition dedicated to the September 18 Mukden incident, presented by the Chinese in the city, indicates that the bomb was set off by the Japanese. The Yasukuni Shrine Museum in Tokyo, meanwhile, argues that the Chinese were responsible. The Columbia Encyclopedia states that the truth is unknown. That said, there are many indications that the Japanese Guandong Army was responsible. While most members of this army denied having planted the bomb, Major Hanaya confessed that the Japanese had made the plan and dropped the bomb.

The government of the People's Republic of China declared September 18 "National Day of Humiliation". The PRC government opened a memorial in Shenyang that houses a historical exhibit on the Mukden Incident, inaugurated on September 18 1991.

The exhibition mixes some historical pieces, including posters and documents, with a dramatic educational re-enactment of the event including the Japanese occupation that followed, the resistance of the Chinese partisans, and the final liberation. The last room is dedicated to the reconciliation of Japan and China. Japanese Premier Ryūtarō Hashimoto visited the museum in 1997and it is one of the main tourist attractions of Shenyang City.