Do you want to save dozens of hours in time? Get your evenings and weekends back? Be able to teach Stalin’s Russia to your students? 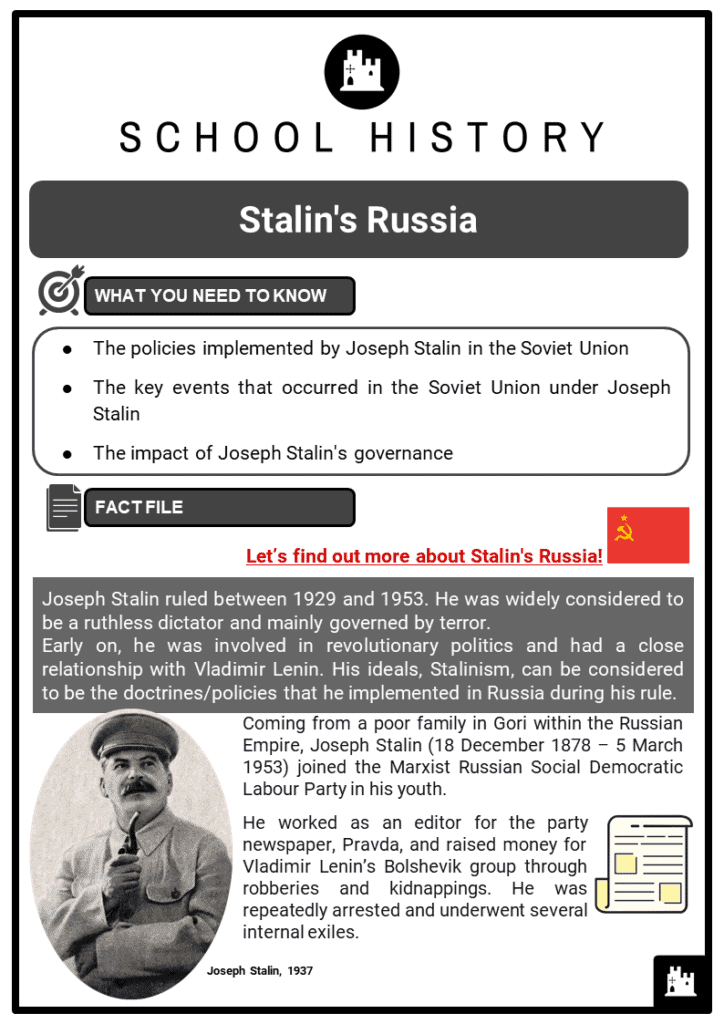 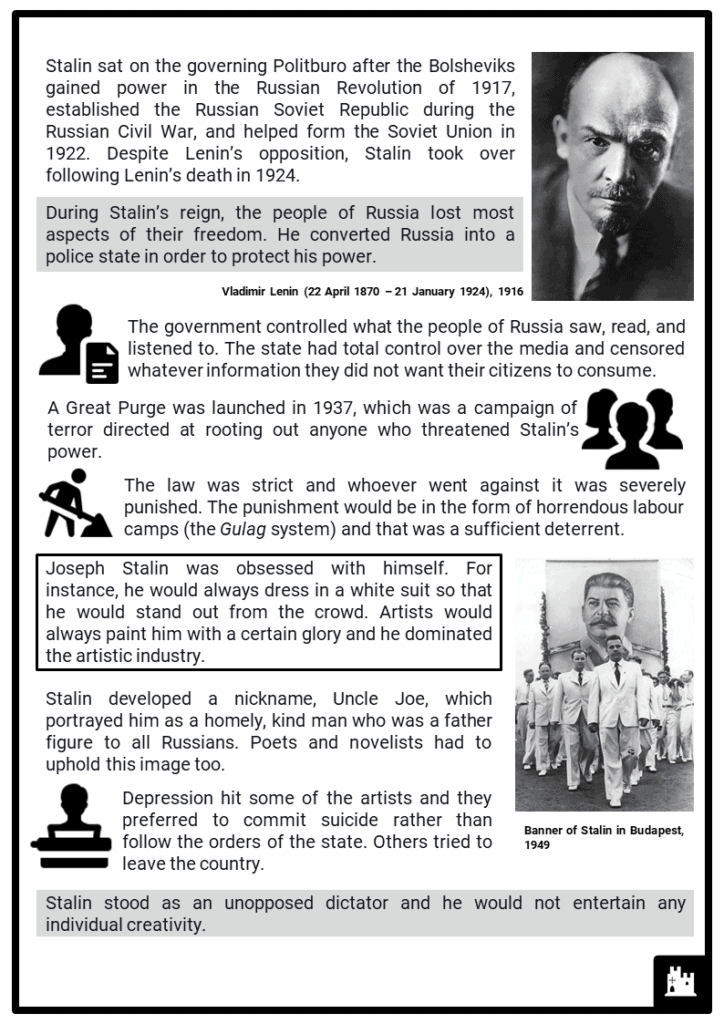 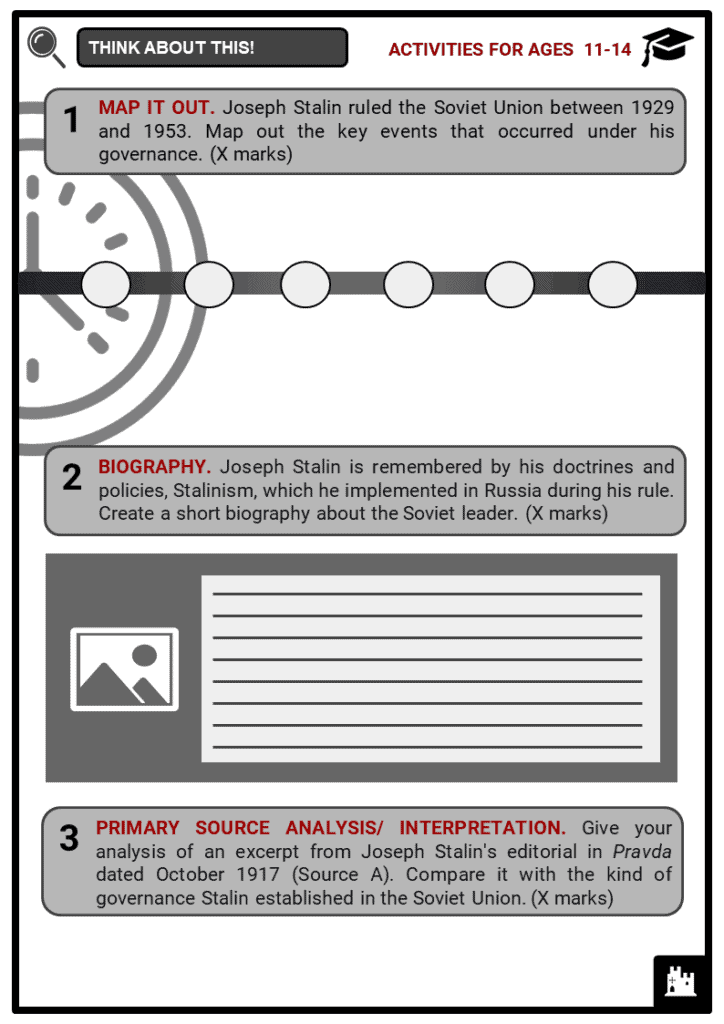 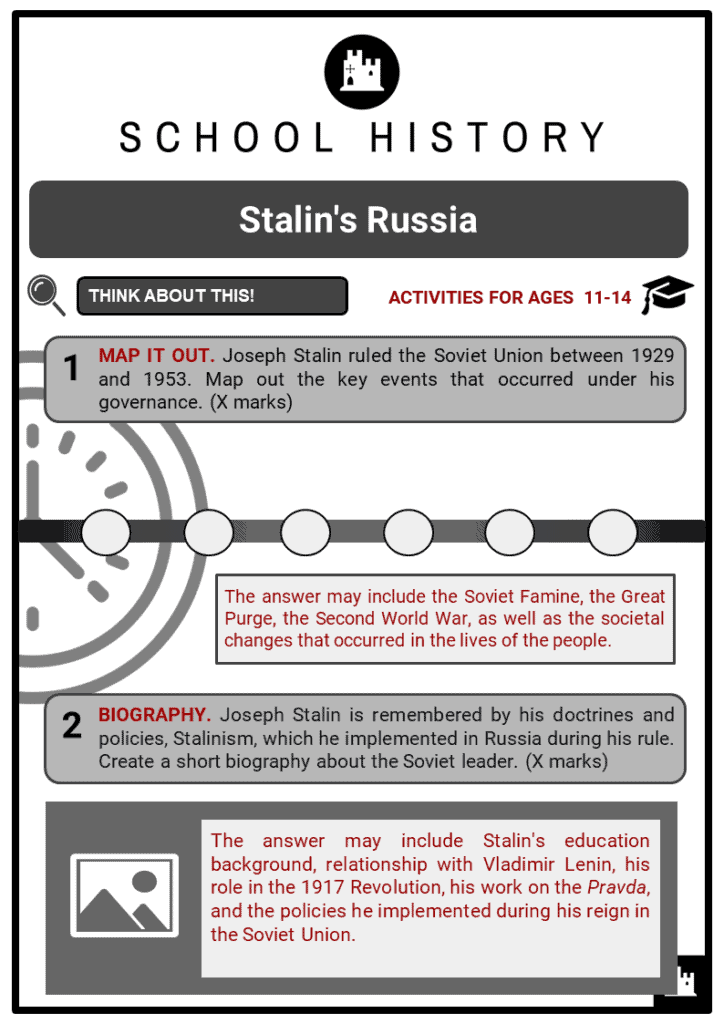 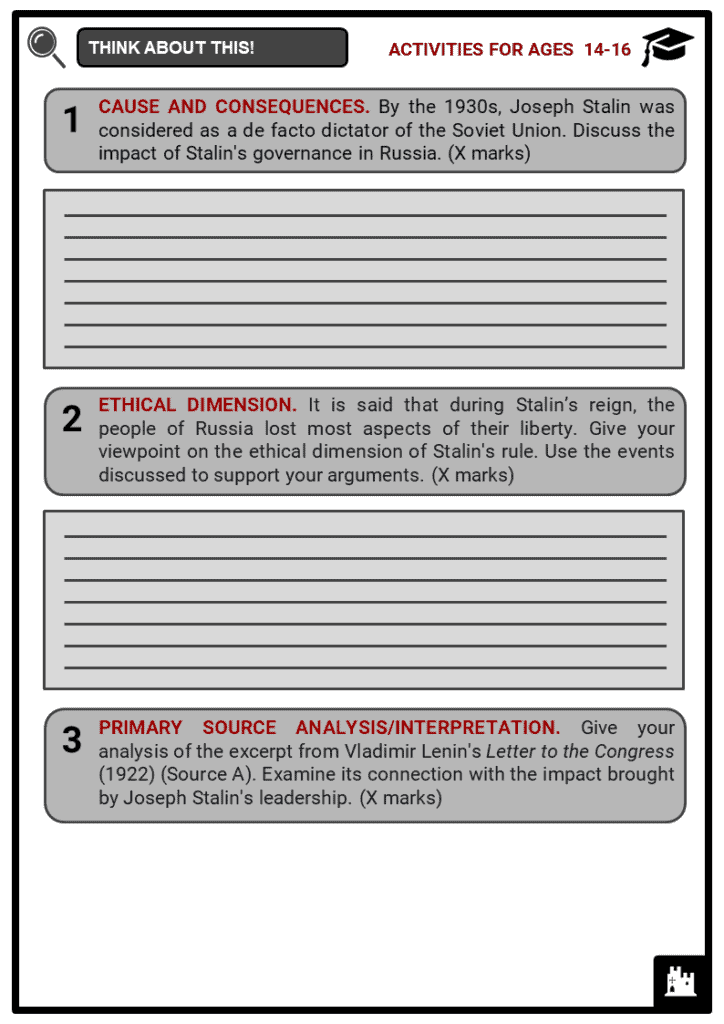 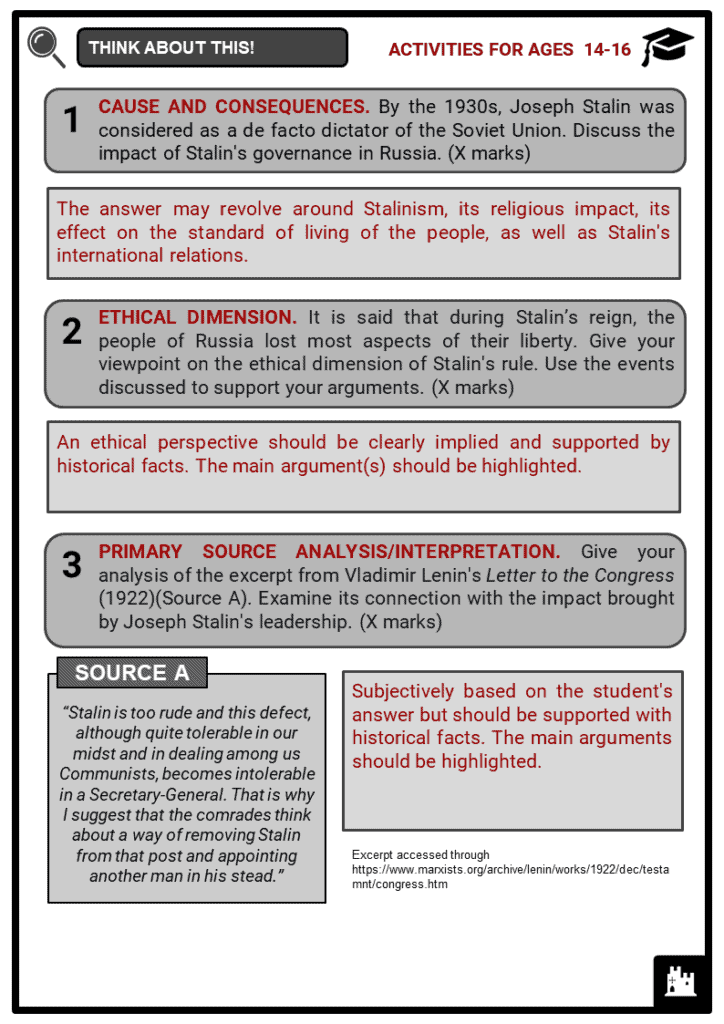 Coming from a poor family in Gori in the Russian empire, Stalin joined the Marxist Russian Social Democratic Labour Party in his youth He worked as an editor for the party newspaper, Pravda, and raised money for Vladimir Lenin's Bolshevik group through robberies and kidnappings. He was repeatedly arrested and underwent several internal exiles. Stalin sat on the governing Politburo after the Bolsheviks gained power in the Russian Revolution of 1917, established the Russian Soviet Republic during the Russian Civil War and helped form the Soviet Union in 1922. Despite Lenin's opposition, Stalin took over following Lenin's death in 1924.

During Stalin’s reign, the people of Russia lost most aspects of their freedom. He converted Russia into a police state in order to protect his power. The government controlled what the people of Russia saw, read and listened to. The state had total control over the media and censored whatever information they did not want their citizens to consume. A Great Purge was launched in 1937, which was a campaign of terror directed at rooting out anyone who threatened Stalin’s power and getting rid of them. The law was strict and whoever went against it was severely punished. The punishment would be in the form of horrendous labour camps and that was a sufficient deterrent.

Joseph Stalin was obsessed with himself. He would always dress in a white suit so that he would stand out from the crowd. Artists would always paint him in a certain glory and he dominated the artistic industry. He developed a nickname, Uncle Joe, which portrayed him as a homely, kind man who was a father figure to all Russians. Poets and novelists had to emulate this example, too. Depression hit some of the artists and they preferred to commit suicide rather than follow the orders of the state. Others tried to leave the country. Stalin stood as an unopposed dictator and he would not entertain any individual creativity.

Education in Russia was controlled by the state. In 1932, a very strict programme of discipline was introduced. The previously-banned exams were reintroduced and the government dictated how subjects were taught. For instance, in History, Stalin’s relationship with Vladimir Lenin in the 1917 March revolution was exaggerated. Students were left in the dark on some issues as the government censored most things. A new book called A Short History of the USSR was introduced to be used in schools.

Youth organisations known as Octobrists were set up outside of school for children between the ages of 8 and 10 years old. The Pioneers were set up for 10 to 16-year-olds. Youth between 19 and 23 joined the Komsomol. Children were taught how to be good communists and emphasis was put on outdoor activities and clean living.

There were a number of attacks on churches in the USSR throughout the 1930s. Communism viewed religion, Christianity in particular, as a threat and, as a result, church leaders were arrested and places of worship destroyed. Stalin felt that the Church challenged his authority and viewed anyone who worshipped God as an enemy. And because of his egomania, Stalin wanted people to worship him instead. Communists had the goal of replacing religion with the “great” ideas of communism.

Women under Vladimir Lenin enjoyed some freedom compared to the days under the Romanov dynasty. Divorce could be conducted easily under Lenin, but Stalin changed all this. He emphasised the family. This was because many children had been born to parents who were not yet married and by 1930 Moscow was full of homeless children who portrayed a negative picture of the so-called “perfect communist society” that Stalin was trying to build.

Married couples were offered a child allowance. Restrictions were placed on divorces and abortions and as a result, ceremonial weddings made a comeback. By 1950, 75% of Soviet doctors were women who were also mothers taking care of their children and acting as housewives. Women maintained their status and there was relative equality with men. In essence, all jobs were open to women. In general, under Stalin, women helped the economy prosper in the state-controlled country.

A command economy was put in place in 1928 where the government made all economic decisions. Stalin came up with a five-year plan for the development of the Soviet Union's economy. The government seized over 25 million farms that were privately owned in the USSR. They were combined into a collective farm owned by the government. People became better educated and were empowered with new technical skills.

The living standards improved in the 1930s in spite of the obvious problems with food production and shortages that were being experienced at the time. Some people benefitted from the system, party officials and skilled factory workers in particular. Healthcare was vastly expanded. Poorer people, who would not ordinarily expect quality medical help in times of illness, received it and increased the demand. The number of doctors increased but there is evidence that they were so scared of any wrongdoing that they followed the rule book to the letter as far as making appointments for operations was concerned.

Housing was really challenging for Stalin’s Russia. Only 6% of households in Moscow had more than one room. Most apartments were put up quickly and were shoddy by Western standards. Some apartment complexes even lacked electrical sockets despite there being electricity. The building companies were not used to such things.

Fitness and sport dictated the life of average Russian people and sports facilities and clubs were provided by the state. Unlike in the tsar’s days, every Russian was also entitled to a holiday. The cinema was controlled by the state and emphasis was placed via the media, on educating yourself on fitness.

Despite there being some obvious disadvantages to Stalin’s rule there were some advantages to it as discussed below.

Russia became a major industrial nation by 1939 although this progress could not be compared with that of America as she was going through the famous Depression and, in Western Europe, millions were unemployed. Workers who did not confront the state were treated in a better way compared to the reign of the tsar. Russia’s military forces were also benefiting from this industrial growth and there was a stable government under Stalin. Her people also received quality medical care.

It should not be forgotten that scores died from famine after Stalin’s experiment failed. Russia’s agricultural sector was not growing and was at the same level in 1939 as in 1928 but with the additional burden of an increase in population by 40 million.

Many of Russia’s most talented people were murdered during the purge of 1930. Anyone who dared express themselves was seen as a threat by the increasingly paranoid Stalin. They were either killed or imprisoned, which eventually led to death. The vast Soviet army was considered brainless as most of her senior officers had been arrested and disposed of during the purge.

Still considered one of the 20th century's most significant figures, Stalin retained popularity in Russia and Georgia as a victorious wartime leader who established the Soviet Union as a major world superpower.

Ukraine, which is currently independent, suffered greatly at the hands of Stalin because of forced collectivisation. He encountered great resistance there and his policies brought widespread starvation especially in 1932-33. Many party officials from Ukraine followed Nikita S. Khrushchev, Stalin’s successor in a bid to make their careers.

During the purges of the 1930s, the Russians suffered just as much as anyone else. Stalin destroyed ancient Russian cultural monuments and many examples of Russian architecture. He was responsible for destroying Russia’s finest cathedrals in an attempt to build a new Russia in his own image. This seemed ironic given that Stalin spoke Russian with a Georgian accent.

Despite Russia being communist, Stalin imported materials, ideas and a skilled workforce from both Western Europe and the United States of America and put in place a working relationship where contracts were offered to major American private enterprises, for instance, Ford Motor Company, which under state supervision assisted in developing the industry of the Soviet economy from the late 1920s to 1930. Soviet companies would take over once the contracts expired.

Before, during and immediately after  World War II, Stalin supervised a series of deportations on a large scale that profoundly affected the ethnic map of the Soviet Union. It is estimated that between 1941 and 1949 nearly 3.3 million were deported to Central Asian and Siberian republics.