Do you want to save dozens of hours in time? Get your evenings and weekends back? Be able to teach The Schlieffen Plan to your students? 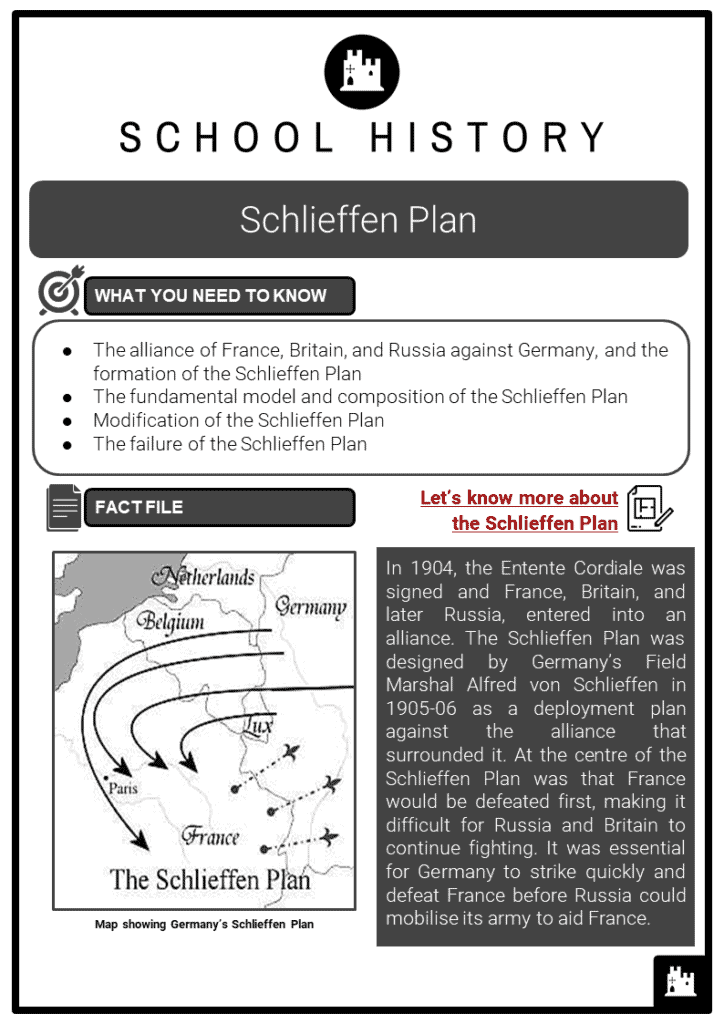 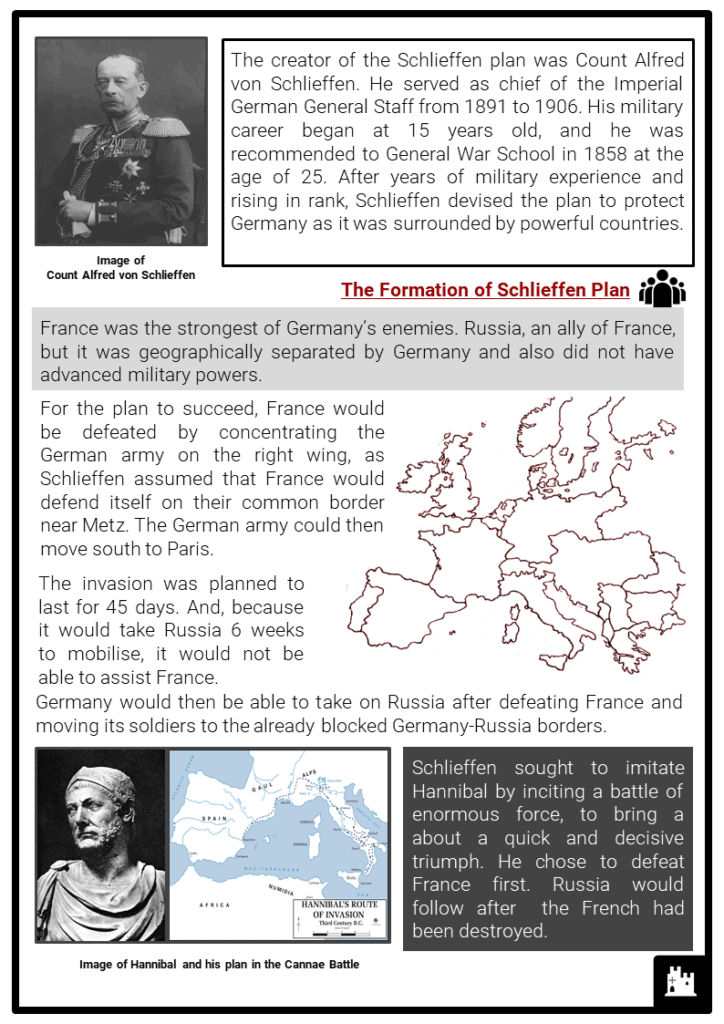 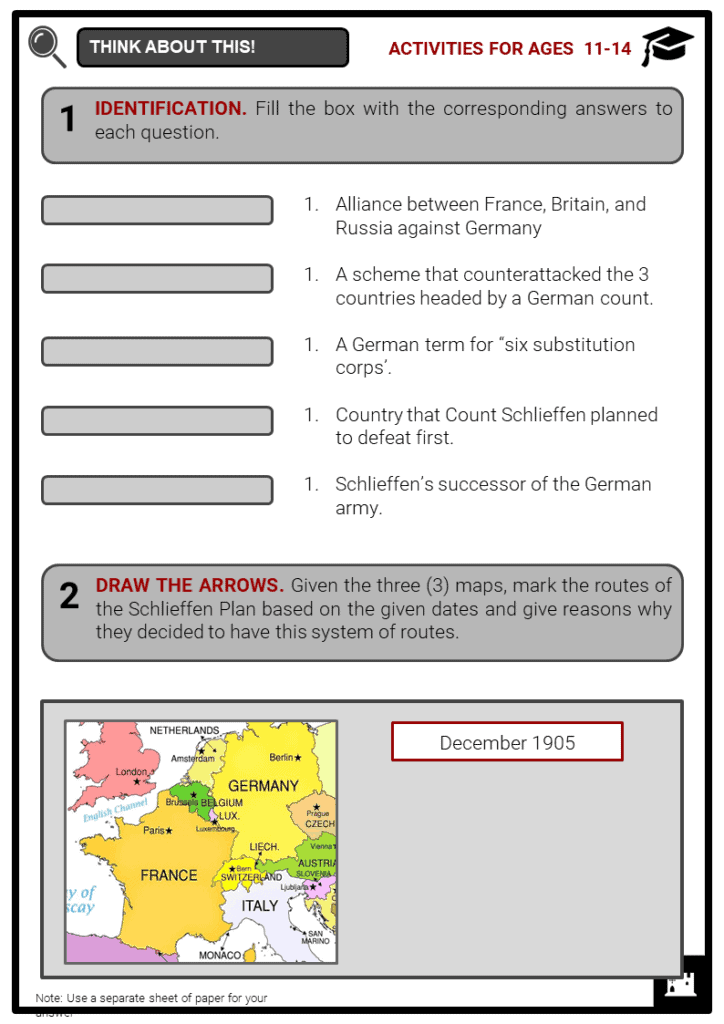 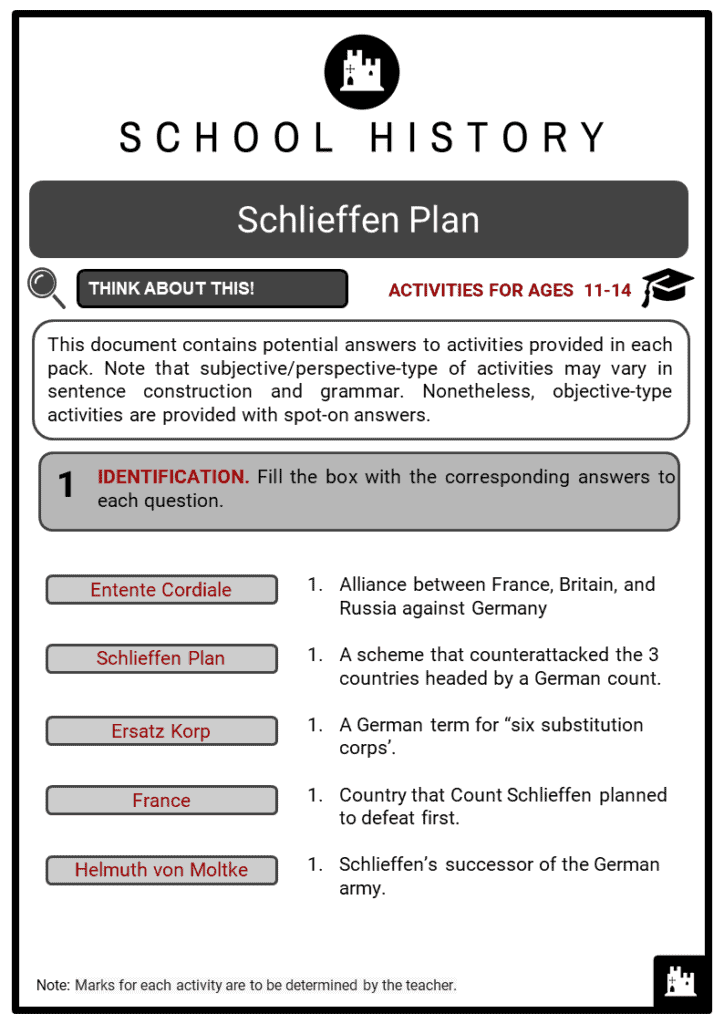 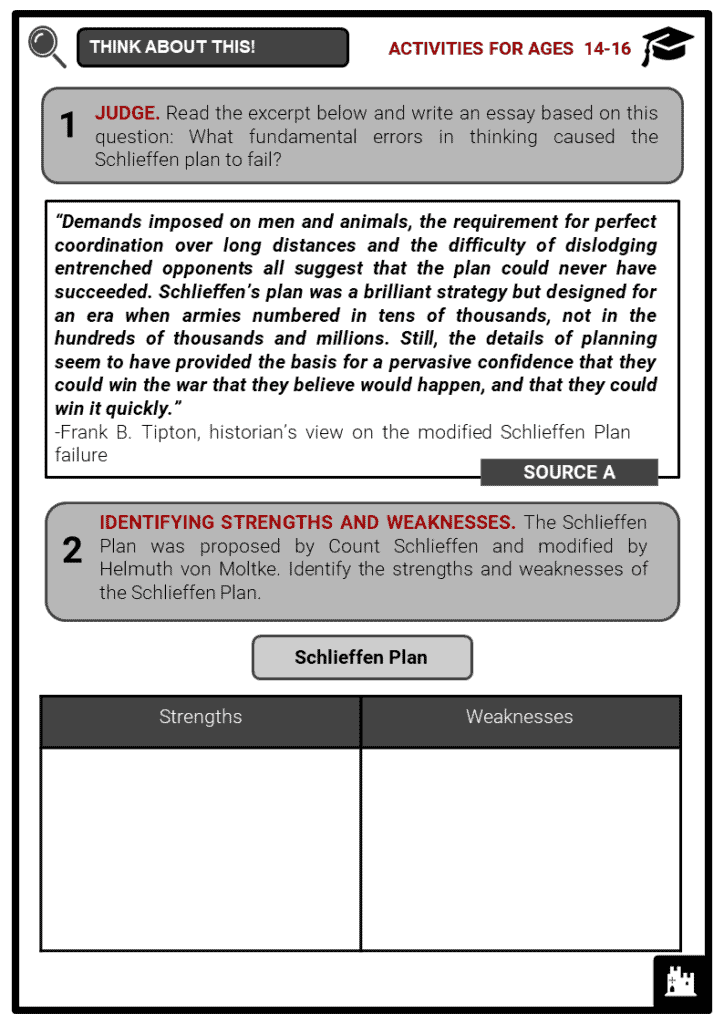 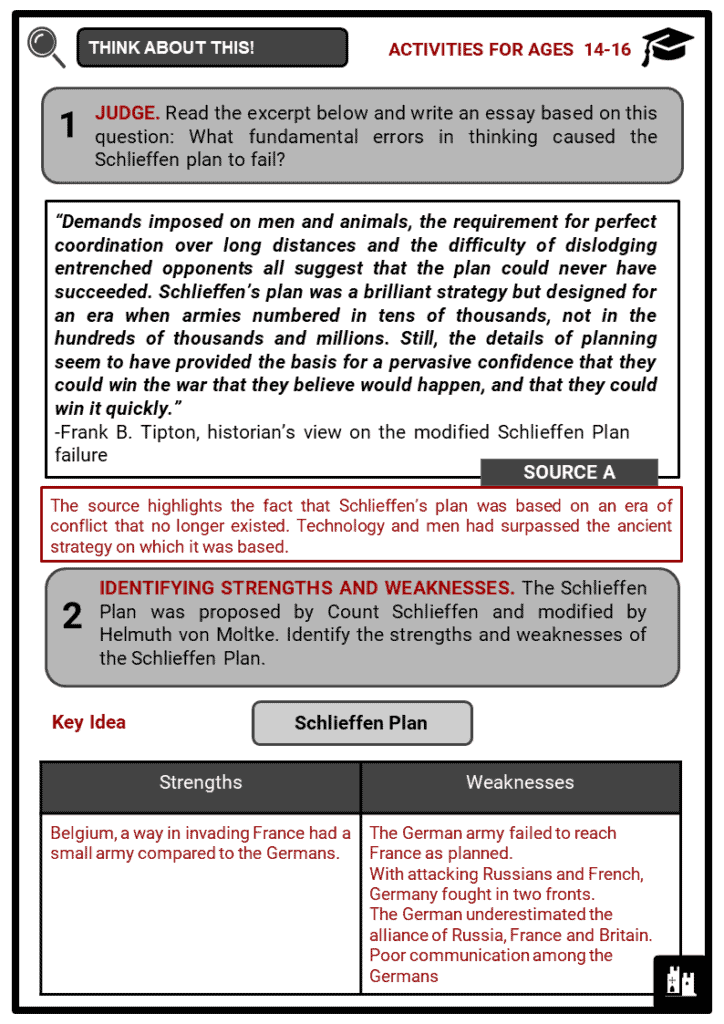 Germany's  Schlieffen Plan was devised for the battle with France and Russia. The plan was proposed by Count Alfred von Schlieffen in 1905. What was the Schlieffen Plan, why was it created, what were the particular changes that were made in the plan, and was it even needed? In this article, we will discuss and find the answers to these questions.

France and Britain signed a peace-friendly, understanding treaty, the Entente Cordiale in 1904, which encouraged both countries to join hands against the threat of Germany. While in negotiations, Russia was added to the alliance, and this concerned Germany because it intimated a combined attack from the respective countries. This led Germany to prepare a counter-attack plan of the joined alliances, and that plan is generally known as the Schlieffen Plan. The plan was basically to weaken the combined alliance and Schlieffen wanted France to be the first one to be defeated. After that, it would be difficult for Russia and Britain to continue the war. It was essential for Germany to defeat France and have them surrender before Russia prepared its army for war.

Schlieffen and the German Army

Schlieffen was one of the brightest students of military history. His plans were inspired by the Cannae Battle. In that battle, the great Roman forces were defeated with a successful flanking manoeuvre, which turned the flanks of the Roman Army and destroyed it completely. Schlieffen was convinced that the same strategy could work with a modern army and the main focus of his plan was the implementation of an enormous flank attack. In 1905, he proposed that because Germany’s two most likely enemies in a continental war, France and Russia, were geographically separate from each other, that Germany could defeat one while maintaining the other in its boundaries. Once one nation was defeated, Germany would have the capacity to consolidate powers to overcome the other through troop focus and quick organisation.

Schlieffen hoped to imitate Hannibal by inciting a battle of enormous poweras a solitary force, to bring a quick and decisive triumph. He chose to defeat France first. Russia would follow after  the French had been destroyed.

Fundamental Model of the Schlieffen Plan

This arrangement called for four armed-force gatherings, called the Bataillon Carré, to amass on the German right.

That northernmost power would comprise of:

These powers were to wield the south and east in the wake of going through unbiased Belgium, transforming into flanks at the back of the solidified French protection along the German outskirts. After crossing the Somme River (west of Paris) at Abbeville and Chaulnes, the primary body of the Bataillon Carré would swing around to draw in the protectors of the French capital, with the Ersatz Korps lending support. The group in the middle,  including six infantry corps, Landwehr troops and a mounted force division, would attack the French at La Feré and Paris, encompassing the capital on the north and east. The third gathering would focus on the right wing of the southernmost region, with eight corps, five hold corps and three Landwehr troops, assisted by two roaming mounted force divisions.

The last gathering comprised of three mounted force divisions, three infantry corps, two Ersatz Korps and holding corps on the left wing. That last gathering was to hinder any French endeavour to counterattack and it could be withdrawn and transported to the right, if necessary. The Upper Rhine to the Swiss outskirts and the Lower Alsace were to be protected via Landwehr units.

The labour proportion was 7:1 from the right to left wing. That massive power was to get through the Metz-Diedenhofen region and to crush every French power before it. It acted like a swing door, that had its pivot in the Alsace area. Schlieffen worked out a definite timetable that considered every conceivable French reaction to German activities, with specific consideration paid to the gently safeguarded Franco-German outskirts. With this arrangem,ent Schlieffen believed that Germany could vanquish France inside a month and a half and the battle finish with an unequivocal "super Cannae" in the south.

The successor of Alfred was Helmuth von Moltke, who took charge as the chief of army staff of the German army in 1906. He customised the plan by removing Holland from the countries to be invaded and Flanders would be the main route. Moltke presented these changes after taking command of the army.

Modifications by Helmuth von Moltke to the Schlieffen Plan

On 2 August 1914, the Schlieffen plan was executed when Luxembourg and Belgium were invaded by the German army. Somehow, the Belgium army held up against the Germans and was shocked by the quick advancement of the Russian army into East Prussia.  The Germans were also amazed at how quickly the British army reached France and Belgium.

On 3 September, the French forces’ Commander-in-Chief, Joseph Joffre, gave orders to his army to draw back to a line by the side of the River Seine, south-east of Paris and over sixty kilometres south to the Marne. The commander of the British Expenditure Army, Sir John French, agreed on joining with the French forces to attack the German army.

The First Attack by the French Army on German Forces

On the morning of 6 September, the German 1st army was attacked by the French 6th army. ; The force was ordered by General Alexander von Kluck to meet up to the attack by opening a gap of fifty kilometres between the German 2nd army and the French armies, which were led by General Karl von Bulow. This alliance between the three states became the reason for the splitting up of the German armies when the French 5th army and the British troops advanced. The Germany forces struggled to break the lines. The French 6th army was about to be defeated,  but was saved by using the taxis in Paris to rush the six thousand reserve armed troops to the battle.

Moltke put the improvised plan into action on 2 August 1914. The Schlieffen Plan had been modified by the chief himself. This modification made by Helmuth von Moltke was the root cause of the failure of the whole plan as things did not go as planned. The Russians sent troops to the border much sooner than expected, which made Moltke release more soldiers, which in turn doomed the plan as he sent less troops to advance than Schlieffen had recommended. He had assumed Belgium would not give much opposition, but the Belgians held up the Germans very successfully.. The aid that was sent to Belgium and France by the British Army arrived much sooner than expected, too, which forced the German troops to back off. Moreover, the communication between the troops and officers with the headquarters of the German army was flawed and poor, which was one of the greatest reasons for losing control. The plan worked initially but there were too many flaws in the modifications for it to be successful.. The tables were turned during the Battle of the Marne, where it was very obvious that things were not in Germany’s hands anymore. The plan lacked in many ways which caused the troops to suffer heavy losses on the battleground. Over time, many debates have been had about Schlieffen’s purpose with this plan as well as the execution of his plan.

1999; T. Zuber, 'The Schlieffen Plan Reconsidered' in: War in History

2008; T. Zuber, ‘Everybody Knows There Was a ‘Schlieffen Plan”: A Reply to Annika

Mombauer’ in War in History