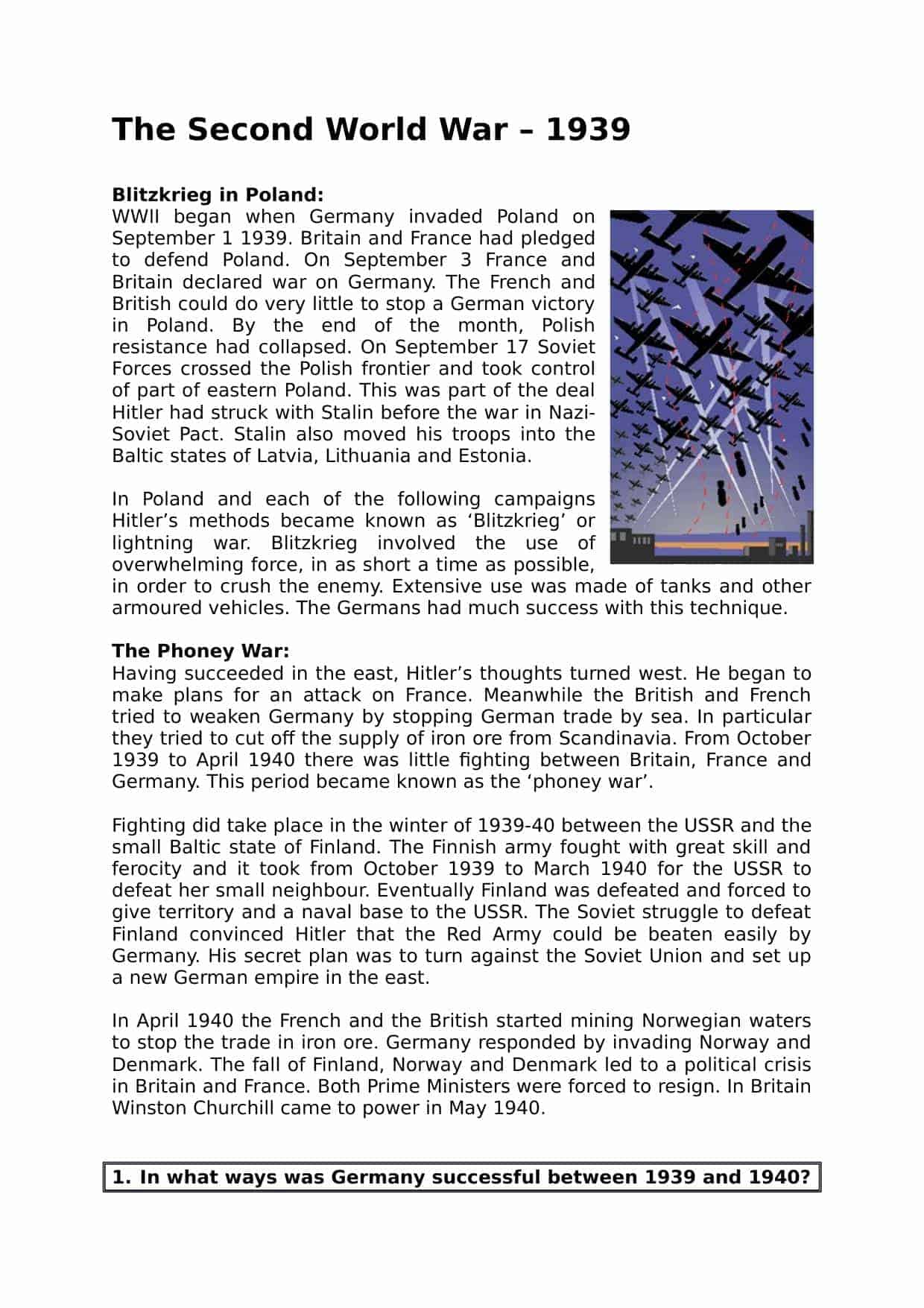 WWII began when Germany invaded Poland on September 1 1939. Britain and France had pledged to defend Poland. On September 3 France and Britain declared war on Germany. The French and British could do very little to stop a German victory in Poland. By the end of the month, Polish resistance had collapsed. On September 17 Soviet Forces crossed the Polish frontier and took control of part of eastern Poland. This was part of the deal Hitler had struck with Stalin before the war in Nazi-Soviet Pact. Stalin also moved his troops into the Baltic states of Latvia, Lithuania and Estonia.

In Poland and each of the following campaigns Hitler’s methods became known as ‘Blitzkrieg’ or lightning war. Blitzkrieg involved the use of overwhelming force, in as short a time as possible, in order to crush the enemy. Extensive use was made of tanks and other armoured vehicles. The Germans had much success with this technique.

Having succeeded in the east, Hitler’s thoughts turned west. He began to make plans for an attack on France. Meanwhile the British and French tried to weaken Germany by stopping German trade by sea. In particular they tried to cut off the supply of iron ore from Scandinavia. From October 1939 to April 1940 there was little fighting between Britain, France and Germany. This period became known as the ‘phoney war’.

Fighting did take place in the winter of 1939-40 between the USSR and the small Baltic state of Finland. The Finnish army fought with great skill and ferocity and it took from October 1939 to March 1940 for the USSR to defeat her small neighbour. Eventually Finland was defeated and forced to give territory and a naval base to the USSR. The Soviet struggle to defeat Finland convinced Hitler that the Red Army could be beaten easily by Germany. His secret plan was to turn against the Soviet Union and set up a new German empire in the east.

In April 1940 the French and the British started mining Norwegian waters to stop the trade in iron ore. Germany responded by invading Norway and Denmark. The fall of Finland, Norway and Denmark led to a political crisis in Britain and France. Both Prime Ministers were forced to resign. In Britain Winston Churchill came to power in May 1940.

The fall of France:

After months of waiting Hitler struck west in May 1940. The Netherlands, Belgium and France were invaded and rapidly defeated by German forces. A British army was forced to flee from the continent back to Britain from the port of Dunkirk. Germany took direct control of much of France, leaving part of the south and south east of the country under a puppet French government, with its capital in the town of Vichy.

At this point it seemed that Hitler had virtually won the war. France was beaten and much of Europe was occupied. Only Britain remained to fight Germany. Sensing that the war was nearly over Mussolini joined forces with Germany in June 1940. He wanted Italy to get some of the rewards from victory.

Having defeated France, Hitler prepared for a German invasion of Britain. The German airforce, the Luftwaffe, set out to win control of the air over Britain. This was the first stage of the invasion plan. German planes bombed military sites, factories and the capital city. London, in August and September 1940. The British airforce, the R.A.F. fought back and the clash of the two airforces became known as the Battle of Britain. Although there were heavy losses on both sides, the R.A.F. got the upper hand in the Battle of Britain and as a result Hitler was forced to put off his plans for the invasion of Britain.

One of the great turning points of the war took place on 22 June 1941 when Germany invaded the Soviet Union in an operation known to the German leaders as Operation Barbarossa. At first the blitzkrieg approach was successful for Germany. An army of over 3 million men stormed into the USSR, armed with over 3000 tanks and 5000 aircraft. Stalin was taken completely by surprise. German forces penetrated deep inside the Soviet Union capturing key cities such as Smolensk and Kiev. By mid-October over 3 million Soviet troops had been captured and the Germans were moving in on Moscow. At this point the campaign began to go wrong for Hitler. The German army reached the suburbs of the Soviet capital but met with fierce resistance and failed to capture the city. German troops were not equipped for the freezing Russian winter because Hitler thought that the war would be over in three months.

The Attack on Pearl Harbour:

While the battle for Moscow raged, the most powerful country in the world, the USA, became involved in the war. On 7 December 1941 the Japanese went to war against the USA with a surprise attack on the US Naval Base at Pearl Harbour. The result of this was that the USA joined forces with Britain and the USSR to fight Germany, Japan and Italy. In the end this was to swing the balance of the war decisively against Germany. At first Japan was all-conquering and in the early months of 1942 Japanese forces seized control of much of Eastern Asia and the islands of the Pacific.

In the summer of 1942 the Germans renewed their attack on the USSR. They concentrated their forces in the South and tried to capture the southern city of Stalingrad. A fierce battle for the control of the city was fought in the autumn of 1942. The Soviet forces launched a counter attack in November and the German army was eventually surrounded. At the end of January 1943 the German army at Stalingrad surrendered. The Battle for Stalingrad was a crucial event. It proved that the Red Army could beat the German army. After Stalingrad Germany was on the defensive and the war began to go against Hitler.

There were further decisive battles in 1942. In June the USA stopped the tide of Japanese conquest at the Battle of Midway Island. After Midway, American forces began a slow process of capturing the islands of the Pacific from the Japanese. In October 1942 the German army in North Africa was defeated by British forces at the Battle of El Alamein. By May 1943 the Germans and Italians had been completely driven out of North Africa.

Both the Germans and the Japanese treated many of their prisoners with extreme brutality. The most horrific atrocity of the war was the way millions of Jewish civilians were systematically murdered in Europe. This act is now known as the Holocaust. As German forces captured territory in Eastern Europe special army units known as Einsatzgruppen massacred local Jews and other groups disliked by Nazi Germans. In July 1941 the German leadership decided on a ‘Final Solution’ to the question of how Jewish people should be treated by the Nazi authorities. Death Camps were set up to exterminate the Jewish population. Many were gassed to death; others were used as slave labour until they died. There can be no doubt that Hitler personally approved the decision.

After the decisive battles of 1942 the war went against Hitler and his allies. However, progress was slow:
• British and American forces landed in Italy in 1943. The Germans put up stiff resistance to the liberation of Italy. Rome was taken in June 1944 but it was not until 1945 that the whole of Italy was under British and American control.
• In January 1944 the Germans abandoned the siege of Leningrad, which had been going on for over two years. By the summer of 1944 the Germans were in retreat across the Soviet Union.
• France was invaded on 6 June 1944. This was known as ‘D Day’. By August 25 the British and American forces had reached Paris. The Germans launched a counter attack in December 1944 in the Ardennes area of Belgium. After some early success the German attack was turned back.
• The USA liberated territories in the Pacific taken by Japan. The Japanese forces put up ferocious resistance at every stage. In October 1944 the Americans invaded the Philippines. Over 17,000 Japanese soldiers were killed before the capital, Manila, was taken.

German power in Europe finally collapsed in April 1945. Soviet forces captured Berlin and Hitler committed suicide. The German forces finally surrendered on 8 May 1945 but the war continued against Japan. The American government was very worried at the level of Japanese resistance. The Americans expected a huge loss of life if they invaded and tried to conquer the islands of Japan. American scientists had been working for some years on the development of a new kind of weapon – the immensely powerful atomic bomb. In August 1945 two atomic bombs were dropped on the Japanese cities of Hiroshima and Nagasaki. The devastation caused by these bombs forced the Japanese government to surrender on 14 August 1945. WWII was over.