The SS and the Final Solution 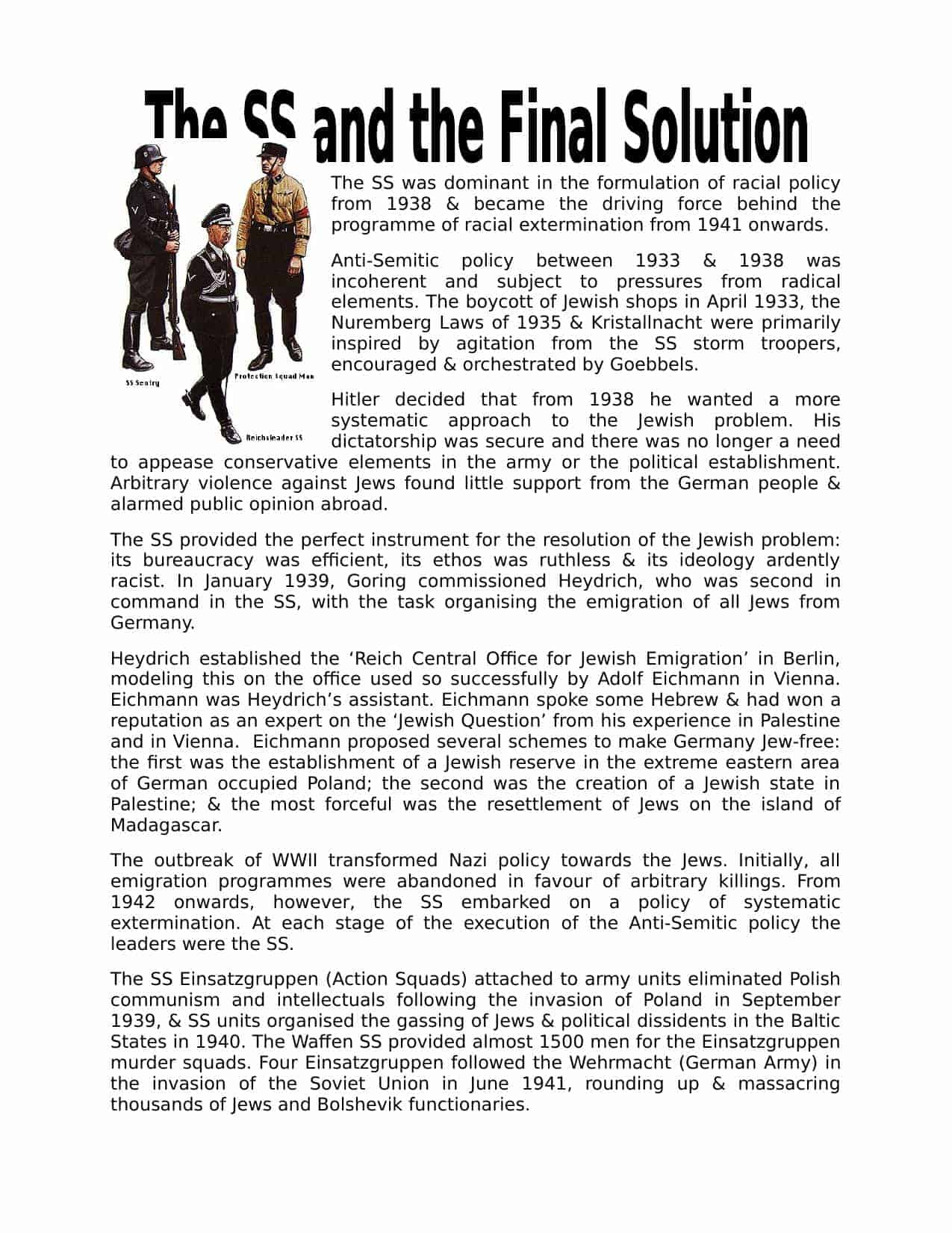 The SS was dominant in the formulation of racial policy from 1938 & became the driving force behind the programme of racial extermination from 1941 onwards.

Anti-Semitic policy between 1933 & 1938 was incoherent and subject to pressures from radical elements. The boycott of Jewish shops in April 1933, the Nuremberg Laws of 1935 & Kristallnacht were primarily inspired by agitation from the SS storm troopers, encouraged & orchestrated by Goebbels.

Hitler decided that from 1938 he wanted a more systematic approach to the Jewish problem. His dictatorship was secure and there was no longer a need to appease conservative elements in the army or the political establishment. Arbitrary violence against Jews found little support from the German people & alarmed public opinion abroad.

The SS provided the perfect instrument for the resolution of the Jewish problem: its bureaucracy was efficient, its ethos was ruthless & its ideology ardently racist. In January 1939, Goring commissioned Heydrich, who was second in command in the SS, with the task organising the emigration of all Jews from Germany.

Heydrich established the ‘Reich Central Office for Jewish Emigration’ in Berlin, modeling this on the office used so successfully by Adolf Eichmann in Vienna. Eichmann was Heydrich’s assistant. Eichmann spoke some Hebrew & had won a reputation as an expert on the ‘Jewish Question’ from his experience in Palestine and in Vienna. Eichmann proposed several schemes to make Germany Jew-free: the first was the establishment of a Jewish reserve in the extreme eastern area of German occupied Poland; the second was the creation of a Jewish state in Palestine; & the most forceful was the resettlement of Jews on the island of Madagascar.

The outbreak of WWII transformed Nazi policy towards the Jews. Initially, all emigration programmes were abandoned in favour of arbitrary killings. From 1942 onwards, however, the SS embarked on a policy of systematic extermination. At each stage of the execution of the Anti-Semitic policy the leaders were the SS.

The SS Einsatzgruppen (Action Squads) attached to army units eliminated Polish communism and intellectuals following the invasion of Poland in September 1939, & SS units organised the gassing of Jews & political dissidents in the Baltic States in 1940. The Waffen SS provided almost 1500 men for the Einsatzgruppen murder squads. Four Einsatzgruppen followed the Wehrmacht (German Army) in the invasion of the Soviet Union in June 1941, rounding up & massacring thousands of Jews and Bolshevik functionaries.

Goering commissioned Heydrich in July 1941 with the preparation of ‘a final solution to the Jewish Question’. Heydrich’s solution was that all European Jews should be exterminated in gas chambers in converted concentration camps. Shooting was deemed too wasteful & harrowing for the SS soldiers. Systematic gassing would be both efficient and would maintain secrecy.

Heydrich & his SS officers also dominated the Wannsee Conference held in January 1942 & bullied top Nazis into agreeing to adopt the systematic gassing of all Jews. The SS went on to supervise gas chambers in the concentration camps & their satellite factories & workshops for Jewish slaves.

The SS were able to become rich as a result of Hitler’s genocidal policy against the Jews. They made profit from the slave labour of concentration camps run by its Economy and Administration Board which by 1945 owned over 150 factories.

The majority of SS men were not psychopaths or drunks, but blind devotion to duty, ideological fanaticism & the promise of promotion or pension offered some rationale to their terrible duties. However, more than any other section of the German Nazi army the SS were most closely involved with Hitler’s racial war against the Jews.

The Waffen SS were often too willing to indulge in genocidal activities. Thousands of Russian partisans & Jews were executed between 1941 and 1943. June 1941 – the village of Oradour sur Glain in France was destroyed & Jewish citizens shot