Do you want to save dozens of hours in time? Get your evenings and weekends back? Be able to teach The Wall Street Crash to your students? 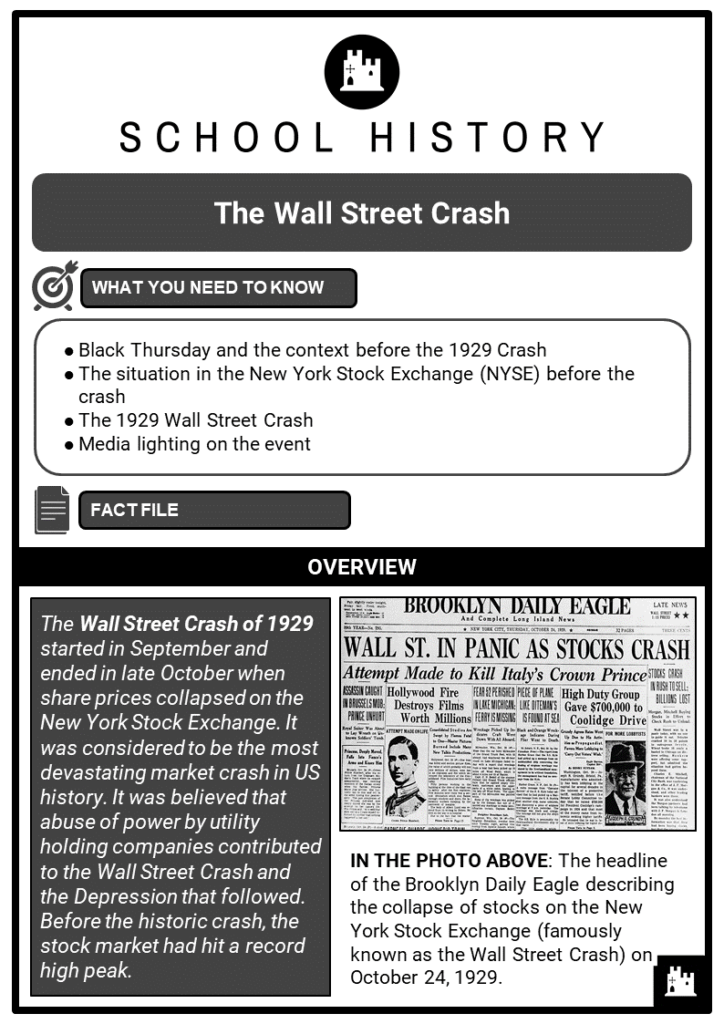 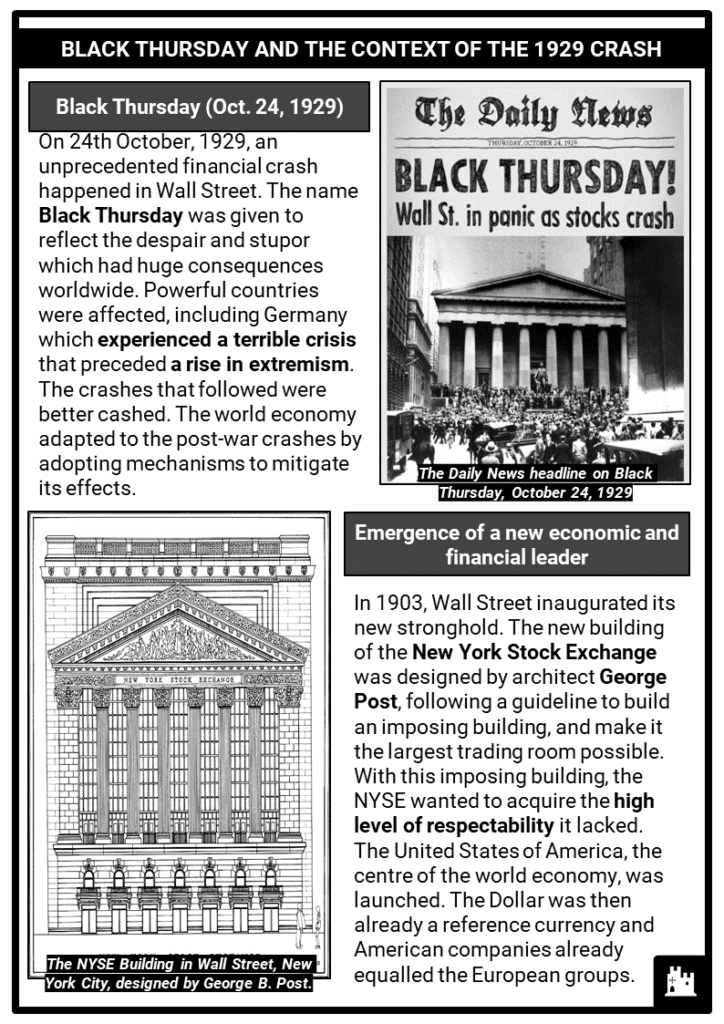 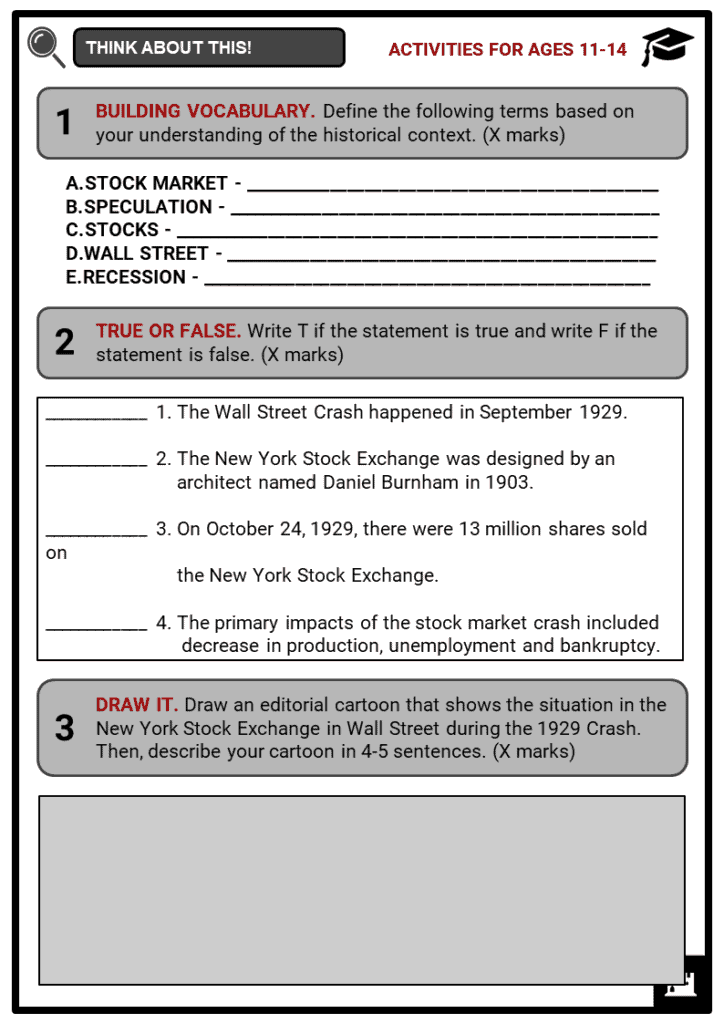 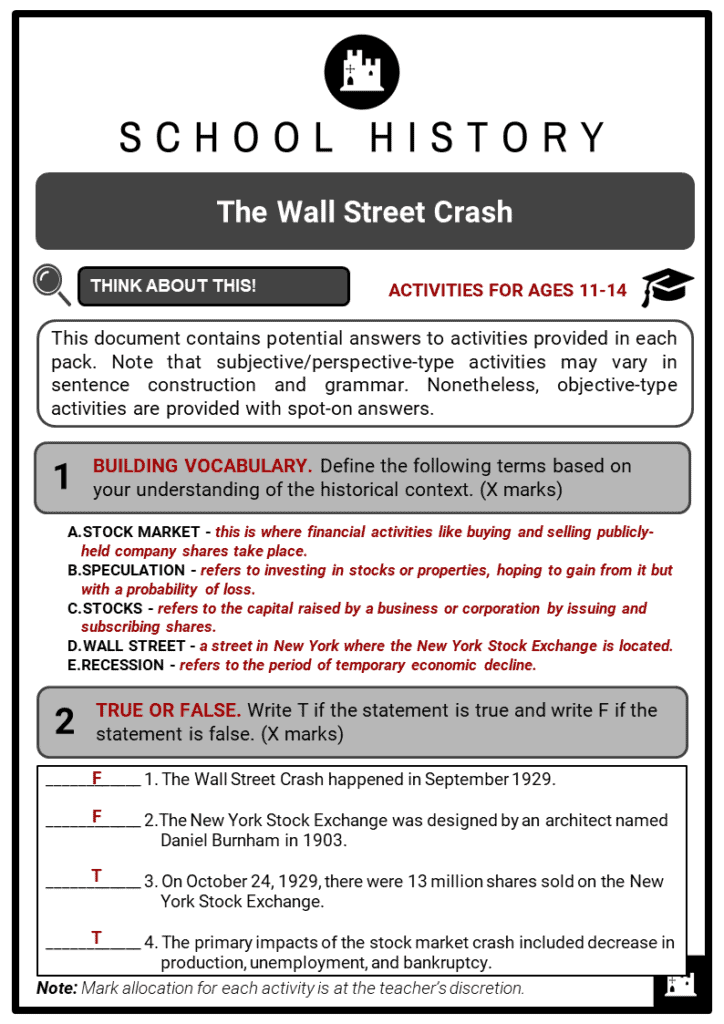 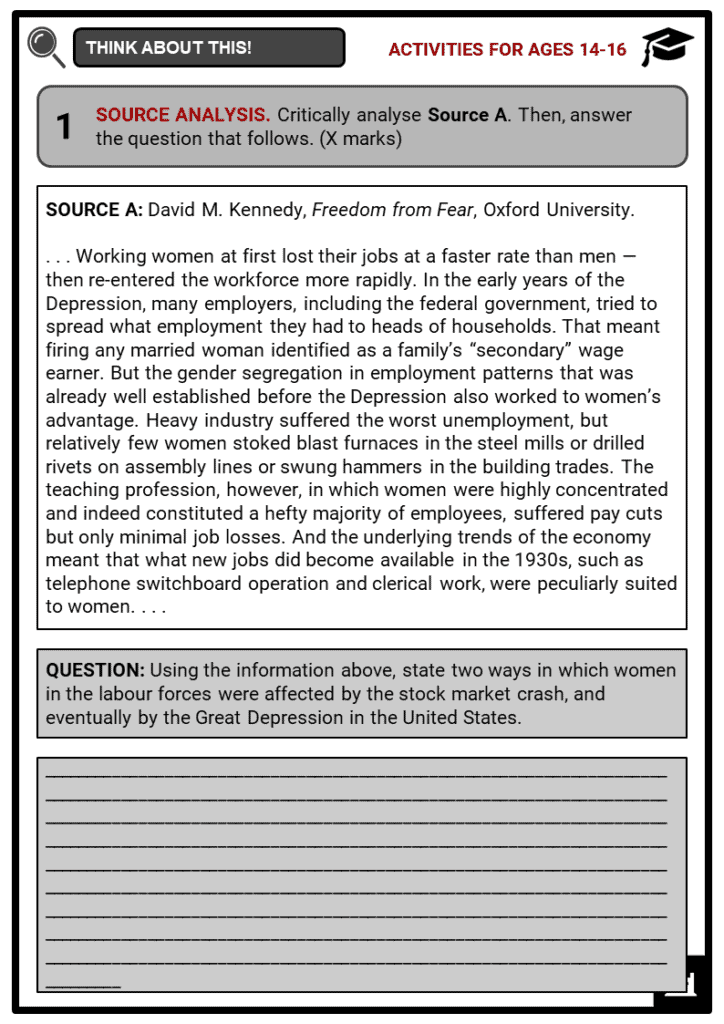 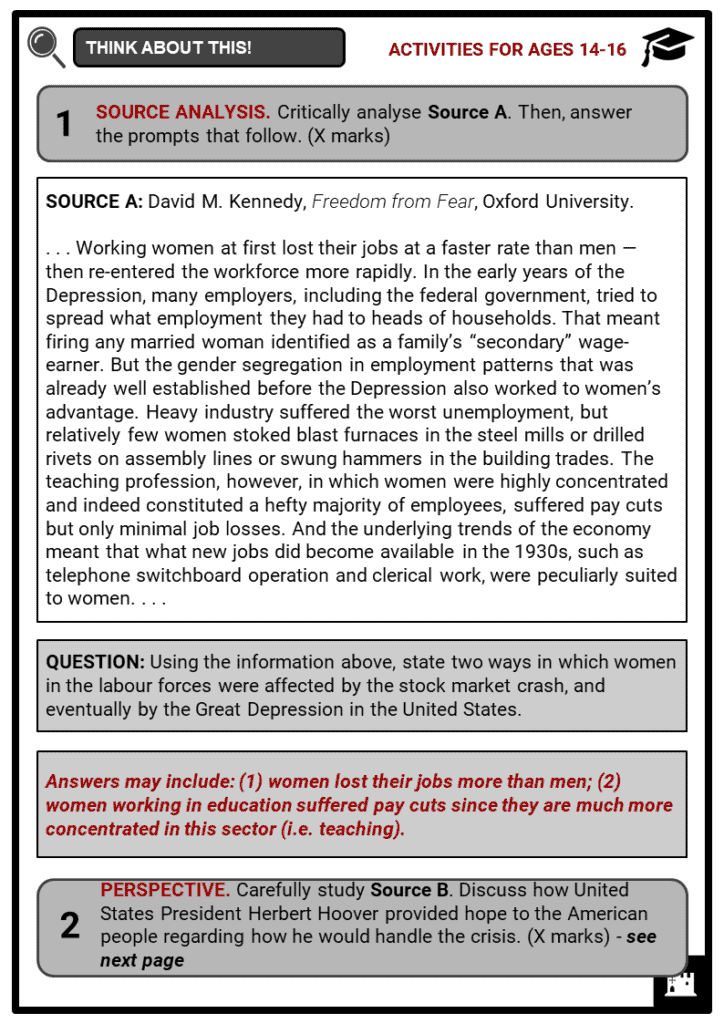 What is Black Thursday?

On October 24, 1929, the world of finance experienced an unprecedented crash. The name Black Thursday was given to reflect despair and stupor. Indeed, this crash has had huge consequences worldwide. All the great powers were affected, and this brought Germany into a terrible crisis that preceded a rise in extremism. The crashes that followed were better cashed. We can think that the world economy has adapted better to the various post-war crashes and mechanisms to put in place to solve them or at least mitigate the effects.

The context before the 1929 Krach

The emergence of a new economic and financial leader

In 1903, Wall Street inaugurates its new stronghold. The new building of the New York Stock Exchange was designed by architect George Post, following a guideline: Build an imposing building on the modest ground to make it the largest trading room. It is with this imposing building that the New York Stock Exchange wants to acquire the high level of respectability it lacks. The United States of America, the centre of the world economy, is launched. The Dollar is then already a reference currency and American companies already equal the European groups.

The world conflict of 1914 will turn the American economy. The great allied powers of the USA will spend without counting on sourcing from American factories. At the end of the war, a gap was created between the USA where the standard of living increases and the European countries which see their decrease, all associated with a huge debt towards the USA. At the economic and stock market level, Wall Street surpasses its competitors in Europe. Indeed, European countries lose a large part of their market share on the South American continent during the conflict because they have to focus on the war effort. The USA is taking advantage of this event to consolidate their positions in this market.

Until 1929, the American economy grew with excellent results. In 1929, America is at its peak and there is a blind trust. The crisis of 1929 will surprise the world. It was even imagined that poverty would soon be eradicated. It is on this climate of confidence and growth, that the financial markets will start to seduce more and more people. All social categories become potential actors. The years before 1929 will see record leaps: + 27% and + 31%. New financial mechanisms are emerging. You can buy securities by paying only a part. We rebalance the transaction at the time of resale. Such a mechanism, in a period of growth, is favourable to the economy but it is extremely dangerous in case of reversal.

The financial crisis of 1929

At the beginning of the day, there is a significant increase in transactions. Major partners such as Great Britain, Japan or Canada have entered recession but nobody is alarmed because the US economy remains dynamic. The day before, the session had been hectic with a rise in the number of transactions but nothing alarming. The stupor begins to be felt because of a first rumour yet unfounded: The big investors would then have massively taken their profits. A panic then goes off. Prices drop up to 10%. The banks, in a concerted action, give themselves the password to spend on the purchase in order to slow down the decline. It was a failure. Indeed, the helplessness of banks amplifies the seriousness of the situation in the minds of market players. The introduction of credit purchases has been an additional factor in the rapid fall in prices. Loan agencies are worried and ask borrowers to give back cash. To meet these requirements, they sell at a loss and then amplify the fall of prices. The total price drop is -13% for this black Thursday alone.

The calm before the storm

The two sessions that followed were less agitated. We can then think of an accident, but the damage was done and the Tuesday after, small carriers panic. In less than an hour, 3 million transactions are made. At noon, the Dow Jones then lost nearly 12% with volumes of 16 million, which is then huge for the time. Panic is great, especially for actors with aggressive and risky positions.

The global impact of the 1929 Krach

Between October and the end of December 1929, the Dow Jones lost nearly 32%. In 1932, the fall will have been 85%. It is from there that there will be a rebound on the American side, but the world will not recover as quickly. In European countries, we see a tightening of credit; the banks are worried. This leads to a drop in consumption and therefore a drop in production followed in turn by a rise in unemployment. In other words, it is not a favourable climate for investors, who no longer take any risk. America is experiencing a period of deflation due to the simultaneous fall in prices and consumption, but it is Germany that will experience the highest inflation since it will even enter hyperinflation. We are witnessing a rise in extremism that will lead to the Second World War.

The Wall Street Krach (October 1929) symbolizes the entry of the capitalist countries into the economic crisis of the 1930s. From the years 1926-1927, a favorable economic situation (atmosphere of general prosperity) added to a rapid transformation of the structures of the company in the United States (generalization of public limited companies) as well as to credit facilities (4 / 5th on the stock market transactions on credit) lead to a major stock market fever and a sharp rise in share prices on the New York Stock Exchange. In 1929, transactions average an average of 4.2 million securities a day, sometimes with some particularly spectacular increases (8.2 million in March 1929). An upward movement of anticipation reigns in a context of growth and prosperity, conferring an important speculative character on the numerous stock market transactions. Everything collapses in a few days, the share price is experiencing a dramatic turnaround, which causes a general movement of sales.

The stock market crisis begins on October 23, 1929, and Thursday, the 24 the, the famous "black Thursday" is a real panic: 13 million securities are sold. On October 29, 16.5 million shares are still liquidated. The Krach will last 22 days, constituting the longest stock market crisis in history. Between September and November 1929, the price of securities fell from index 381 to the index 198. The idea has often been put forward that this Krach of Wall Street was the trigger of the great economic crisis of the 1930s, which did not only rock the American economy but all the capitalist economies. It seems that this crash is rather indicative of a slowdown in growth since the end of 1928 and the beginning of 1929 and the stock market crisis was in fact only a link in the chain that has disintegrated western economies. Upward movements of anticipation no longer corresponded for several months to the real state of the economy, which is slowing down, leading to the bursting of the speculative bubble and resale movement. Revealing a reversal of growth, it is undeniable that the stock market crash of 1929 plays a role of the accelerator in the worsening of the economic situation. Companies saw a large part of their capital lost overnight by the phenomenon of falling shares. As a result, many companies were forced into bankruptcy or significantly reducing their activity. Three months after the crash, car production was halved in the United States.

But the crash does not only have a negative impact on business supply: it also has significant implications for demand as credit facilities are significantly reduced (many banks that have largely financed credit bankruptcy). Opportunities are thus reduced for companies in all economic sectors, causing a considerable drop in production and an unprecedented rise in unemployment (8 million unemployed in the United States in 1931, or 16% of the active population)

The stock market images showed the fundamental role played by brokers ("brokers" in the US), acting as intermediaries between supply and demand for action. Their role is essential during the dark days of October 1929 since it is they who are at the heart of the resale movement of shares, resulting in a cycle of lower prices. It should be noted that brokers do not always act on the sole interest of their clients but also take into account their own interest since they receive a percentage on each transaction. An assembly allows showing in a pictorial way the bursting of the speculative bubble and the collapse of the courts, like a house of cards. Lastly, the parallelization of stock market images and industrial sites illustrates the economic consequences of the stock market crash (bankruptcies of many companies: a hundred thousand bankruptcies were recorded in the United States between 1929 and 1932).