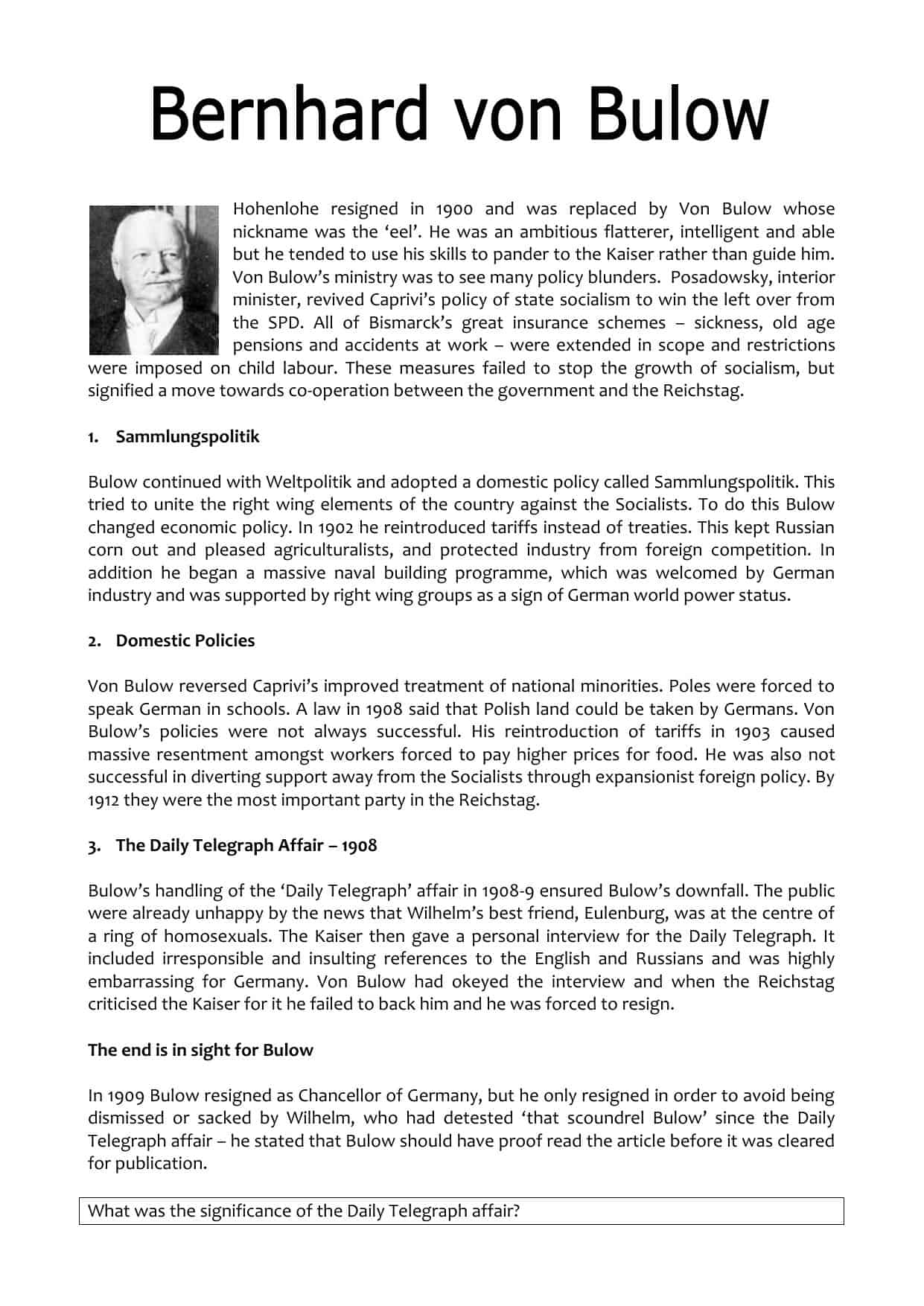 Hohenlohe resigned in 1900 and was replaced by Von Bulow whose nickname was the ‘eel’. He was an ambitious flatterer, intelligent and able but he tended to use his skills to pander to the Kaiser rather than guide him. Von Bulow’s ministry was to see many policy blunders. Posadowsky, interior minister, revived Caprivi’s policy of state socialism to win the left over from the SPD. All of Bismarck’s great insurance schemes – sickness, old age pensions and accidents at work – were extended in scope and restrictions were imposed on child labour. These measures failed to stop the growth of socialism, but signified a move towards co-operation between the government and the Reichstag.

1. Sammlungspolitik
Bulow continued with Weltpolitik and adopted a domestic policy called Sammlungspolitik. This tried to unite the right wing elements of the country against the Socialists. To do this Bulow changed economic policy. In 1902 he reintroduced tariffs instead of treaties. This kept Russian corn out and pleased agriculturalists, and protected industry from foreign competition. In addition he began a massive naval building programme, which was welcomed by German industry and was supported by right wing groups as a sign of German world power status.

2. Domestic Policies
Von Bulow reversed Caprivi’s improved treatment of national minorities. Poles were forced to speak German in schools. A law in 1908 said that Polish land could be taken by Germans. Von Bulow’s policies were not always successful. His reintroduction of tariffs in 1903 caused massive resentment amongst workers forced to pay higher prices for food. He was also not successful in diverting support away from the Socialists through expansionist foreign policy. By 1912 they were the most important party in the Reichstag.

3. The Daily Telegraph Affair – 1908
Bulow’s handling of the ‘Daily Telegraph’ affair in 1908-9 ensured Bulow’s downfall. The public were already unhappy by the news that Wilhelm’s best friend, Eulenburg, was at the centre of a ring of homosexuals. The Kaiser then gave a personal interview for the Daily Telegraph. It included irresponsible and insulting references to the English and Russians and was highly embarrassing for Germany. Von Bulow had okeyed the interview and when the Reichstag criticised the Kaiser for it he failed to back him and he was forced to resign.

The end is in sight for Bulow
In 1909 Bulow resigned as Chancellor of Germany, but he only resigned in order to avoid being dismissed or sacked by Wilhelm, who had detested ‘that scoundrel Bulow’ since the Daily Telegraph affair – he stated that Bulow should have proof read the article before it was cleared for publication.