Alliances as a cause of World War I Facts & Worksheets

Download Alliances as a cause of World War I Worksheets

Do you want to save dozens of hours in time? Get your evenings and weekends back? Be able to teach Alliances as a cause of World War I to your students? 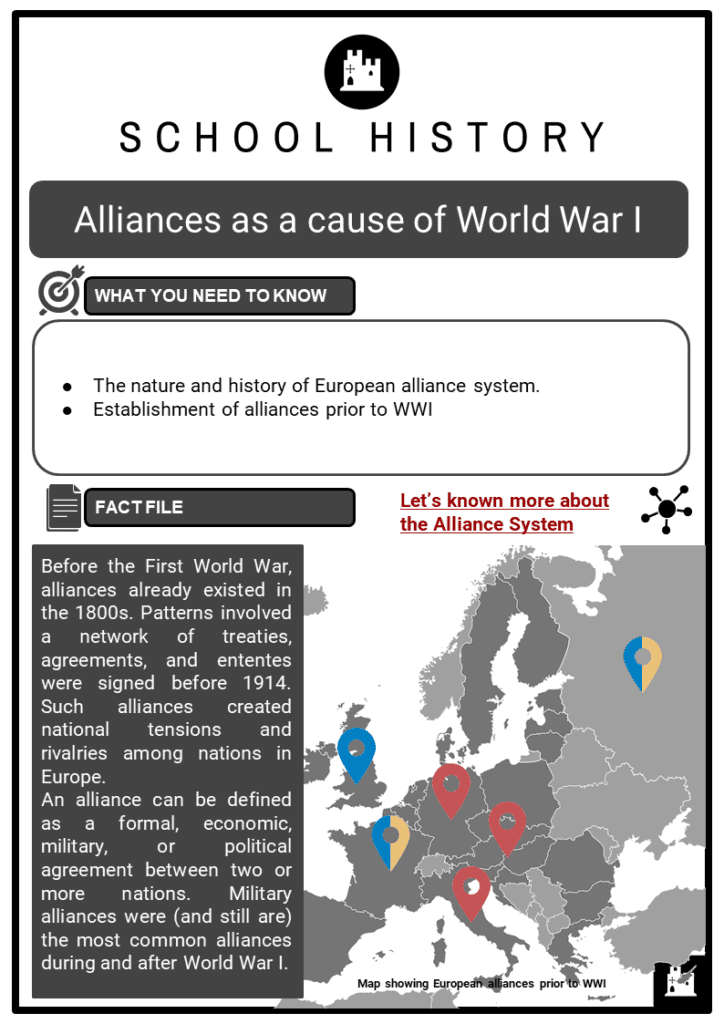 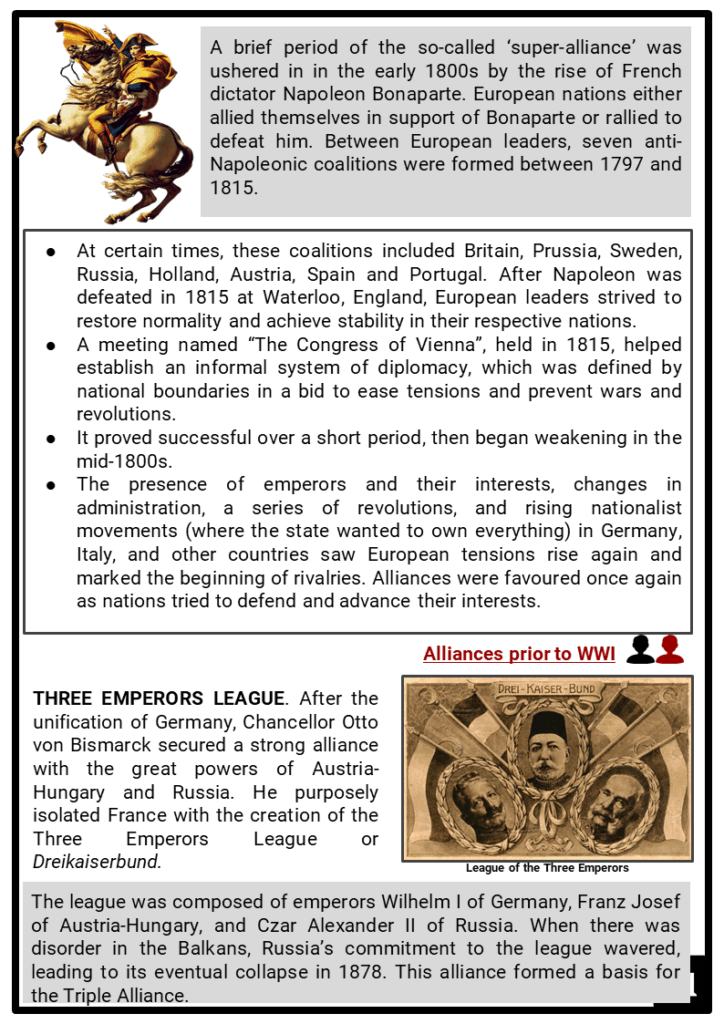 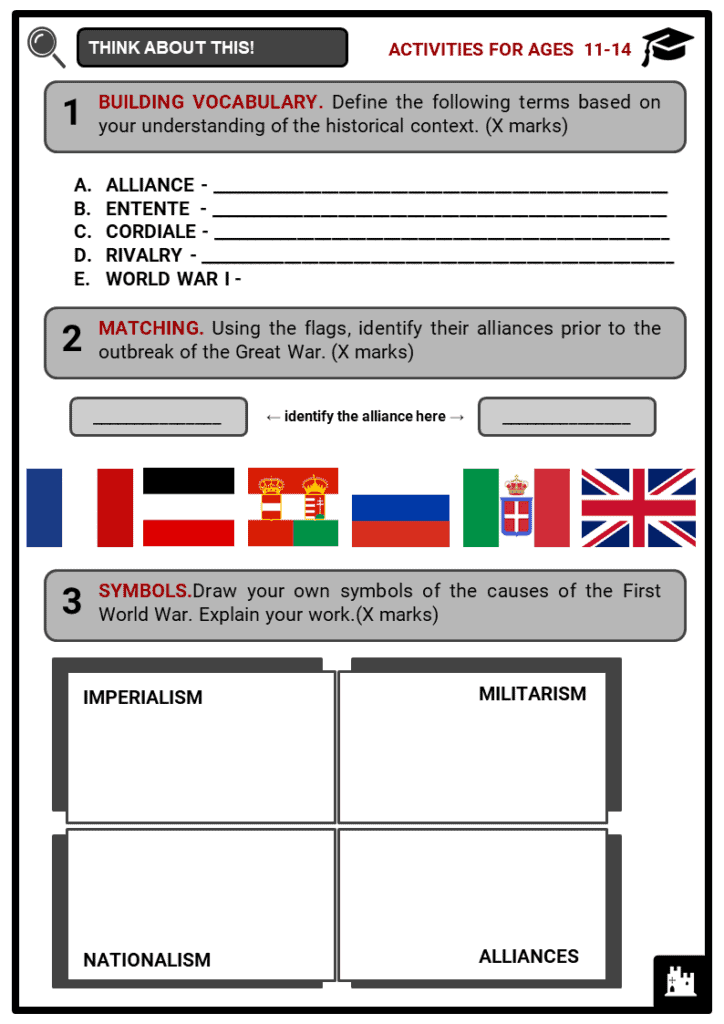 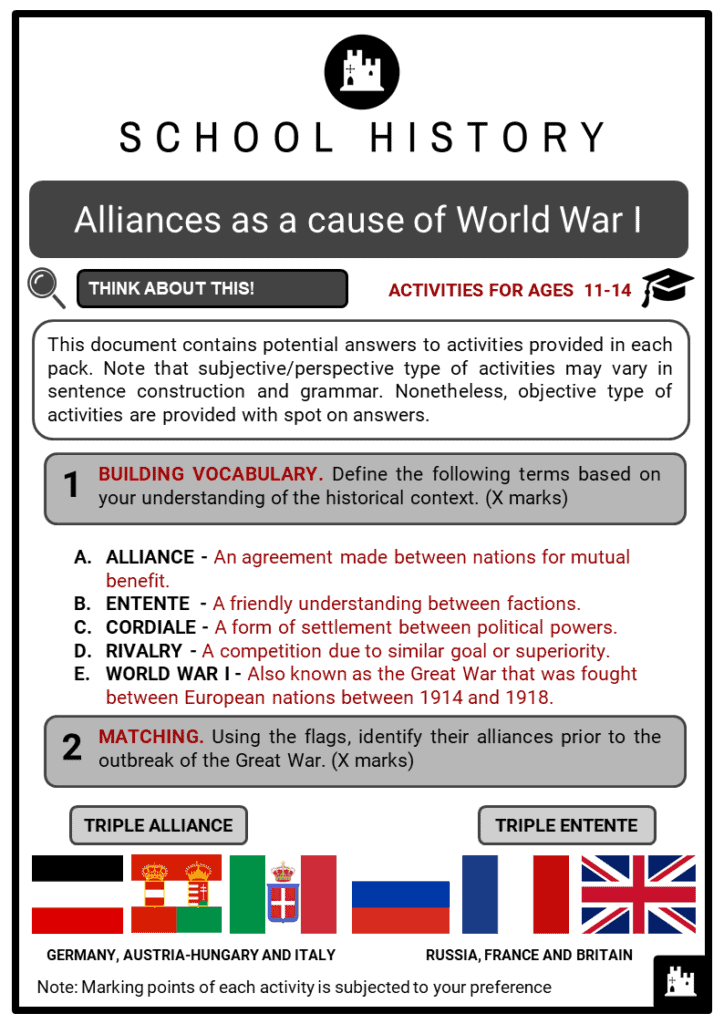 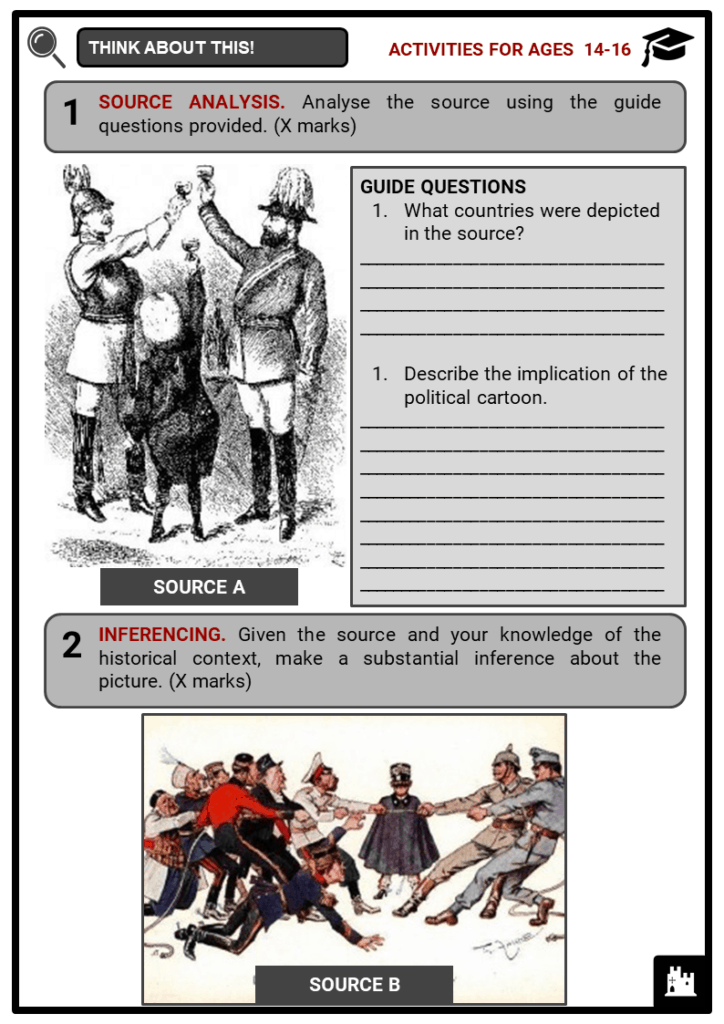 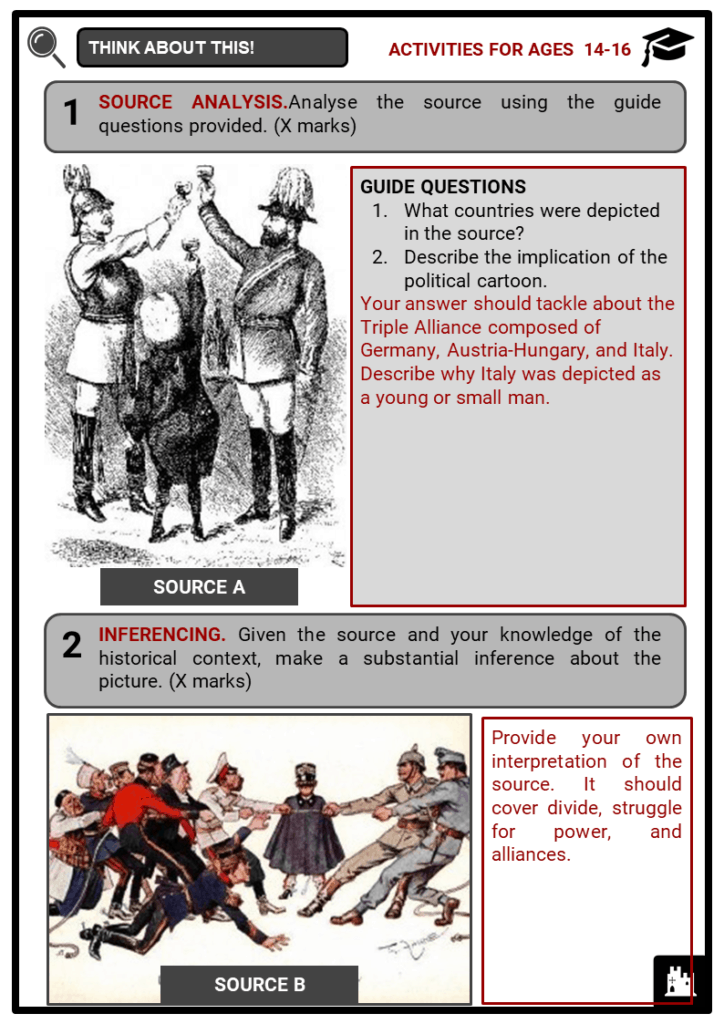 Alliances can be thought to be the best-known reason for World War I. An alliance can be defined as a formal, economic, military or political agreement between two or more nations. Military alliances were (and still are) the most common alliances during and after World War I.  They usually contain pledges that if a war or an act of aggression occurs, one nation will support the other in terms of an army that is mobilising troops, weapons and relief. These terms are usually present in an alliance document. Moreover, alliances can also be economic terms, such as bilateral or multilateral trade agreements, investments or even loans. It was common during the 19th and early 20th centuries for European nations to form, annul and restructure alliances regularly. The Great Powers of Europe had structured themselves into two main alliance blocs by 1914. This consequently meant that if one of the nations in the alliance blocs went to war, then all in that particular alliance would be involved.

Alliances were not a new thing in European history. For centuries there had been ethnic, political and territorial rivalries in Europe and they would often, due to paranoia, lead to war. An example was France and England, who were ancient rivals, which led to open warfare several times between the 14th and early 19th centuries. Another example was the relationship between France and Germany. As France and Russia were sworn enemies, this alliance gave some of the European states some protection.

Alliances prevented larger, stronger states from waging war on the smaller, weaker states. In the 1700s, alliances were both a defence measure and a political instrument. It was not uncommon for kings and princes to form, reform or restructure alliances in an attempt to benefit their interests. Sometimes this was just a move to isolate and starve their rivals. These alliances often did not last as they either collapsed when new leaders took over or were replaced by other alliances.

A brief period of the so-called ‘super-alliance' was ushered in in the early 1800s by the rise of French dictator Napoleon Bonaparte. European nations either allied themselves in support of Bonaparte or rallied to defeat him. Between European leaders, seven anti-Napoleonic coalitions were formed between 1797 and 1815. At certain times, these coalitions included Britain, Prussia, Sweden, Russia, Holland, Austria, Spain and Portugal. After Napoleon was defeated in 1815 at Waterloo, England, European leaders strived to restore normality and achieve stability in their respective nations. A meeting named “The Congress of Vienna”, held in 1815, helped establish an informal system of diplomacy, which was defined by national boundaries in a bid to ease tensions and prevent wars and revolutions. It proved successful over a short period, then began weakening in the mid-1800s. The presence of emperors and their interests, changes in administration, a series of revolutions, and rising nationalist movements (where the state wanted to own everything) in Germany, Italy and other countries saw European tensions rise again and marked the beginning of rivalries. Alliances were favoured once again as nations tried to defend and advance their interests.

Some of the agreements signed between nations are discussed below.

This was not an alliance but a multilateral treaty, which acknowledged Belgium as an independent and neutral state, achieved after separating from southern Holland in the 1830s. It involved several European countries considered as great powers, the nations being Great Britain and Prussia. When German troops invaded Belgium after the assassination of Franz Ferdinand in 1914, the British viewed this as a violation of the treaty they had signed.

This was an alliance that involved the three ruling monarchs from Germany, Austria-Hungary and Russia. This ‘Emperors League’ was mainly designed by the Prussian statesman Otto von Bismarck, who saw it as a means of achieving a balance of power in Europe. When there was disorder in the Balkans, Russia’s commitment to the league wavered, leading to its eventual collapse in 1878. This alliance formed a basis for the Triple Alliance.

This was a military alliance formed between Germany and Austria-Hungary, stating that should Russia attack either country, they would unite forces and defend the other. It was signed after the collapse of the Three Emperors’ League and when there was unrest in the Balkans. German nationalists believed in this treaty as they saw it as a way of achieving their goal of uniting Germany and Austria as one nation.

This alliance can be considered as a complex three-way alliance between Germany, Austria-Hungary and Italy,  who resented the Russians and the French as a driving force. All of the signatories were willing to provide military support to each other if they were attacked by either of the two powers. Italy was viewed as the weak link in this alliance, being newly formed and having a small army.

This was a military alliance formed between two imperial superpowers, France and Russia, in response to the Triple Alliance, which had been formed to isolate France. The signing of this treaty was unexpected and derailed plans Germany had for mainland Europe. In the process, it also angered Berlin. However, it involved some economic benefits to both nations giving Russia access to French loans and, the French access to Russian minerals, industries and raw materials.

Entente Cordiale means ‘friendly agreement.’ It was a number of agreements between Britain and France and by  signing this treaty the two nations ended a century of hostility. It should be noted that the Entente was not a military alliance, and neither nations pledged military support to the other. It, however, felt like a step forward.

This agreement between Britain and Russia was not a military agreement and was signed as a way to ease tensions and restore good relations between the two nations. For the better part of the 19th century Britain and Russia had gone to war in the Crimea (1853-56). They were also on the brink of waging war on each other twice. It resolved the status of colonial possessions in the Middle East and Asia.

This treaty cemented the path that was laid by the Entente Cordiale and the Anglo-Russian Entente. It was a three-way agreement between Britain, France and Russia and was not a military alliance. The three ‘Ententes’ of 1904-7 marked the end of British isolation and neutrality.

It is worth noting that most of these alliances and ententes were done in secret and were only revealed to the public after signing. Some of the nations in existing alliances conducted negotiations without informing their other alliance partners. For instance, the German chancellor Bismarck initiated alliance negotiations with Russia in 1887, without advising their major ally Austria-Hungary. Some alliances also entailed ‘secret clauses’ that were not publicly announced for purposes of peace and harmony. These secret clauses only became known to the public after the end of World War I. This secretiveness only served to heighten suspicion and tensions.

World War I occurred after small but highly significant changes were made in the European alliances. A case in point was a clause inserted into the Dual Alliance in 1910 stating that Germany would directly intervene if Austro-Hungary was ever attacked by Russia. These modifications were an indication of what was to come. Some historians feel that the impact that the alliances had as a cause of the First World War is often overstated. They argue that alliances did not disempower governments or lead to automatic declarations of war and that the authority to declare war was wielded only by the national leaders. Neither nations, nor their leaders, were willing to fight wholeheartedly for peace, as put by historian Hew Strachan.