Nationalism as a cause of World War I Facts & Worksheets

Download Nationalism as a cause of World War I Worksheets

Do you want to save dozens of hours in time? Get your evenings and weekends back? Be able to teach Nationalism as a cause of World War I to your students? 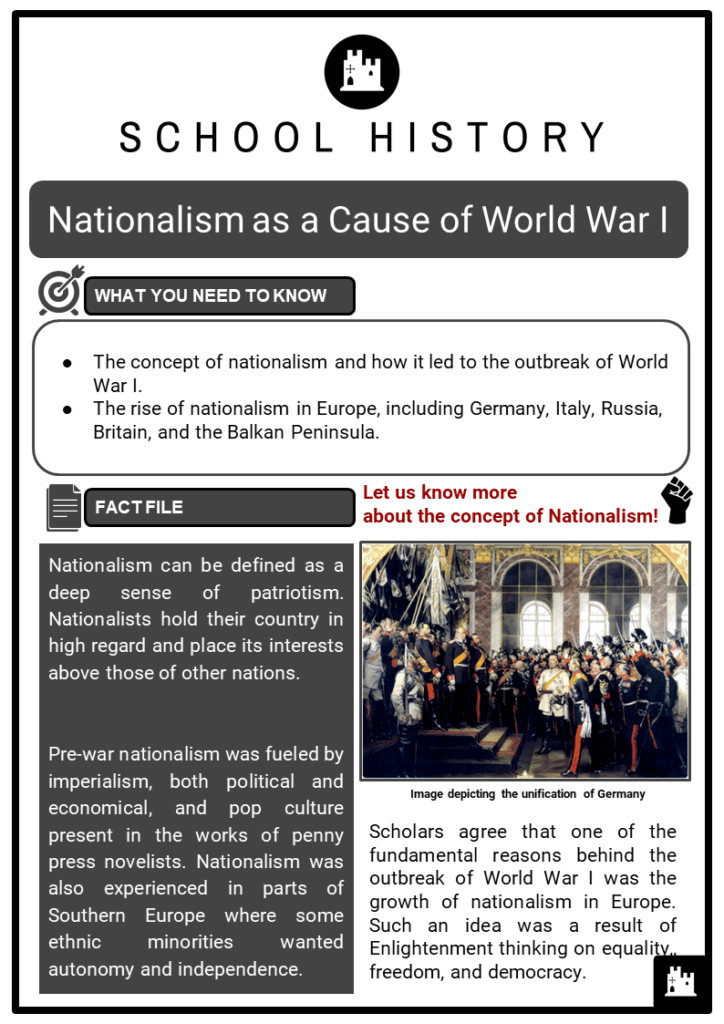 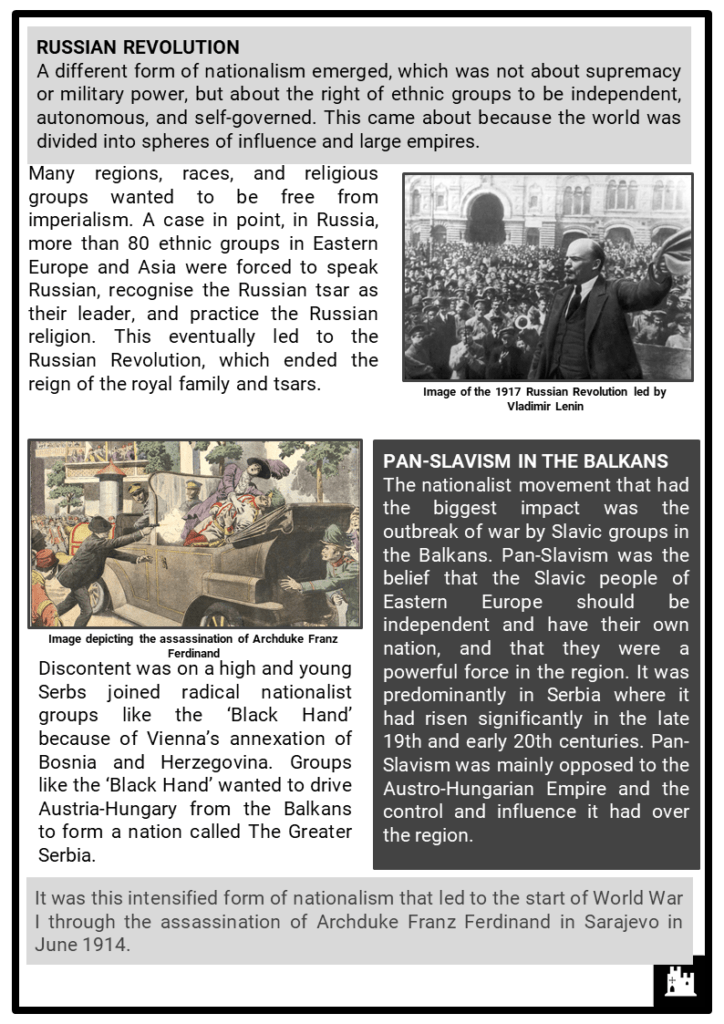 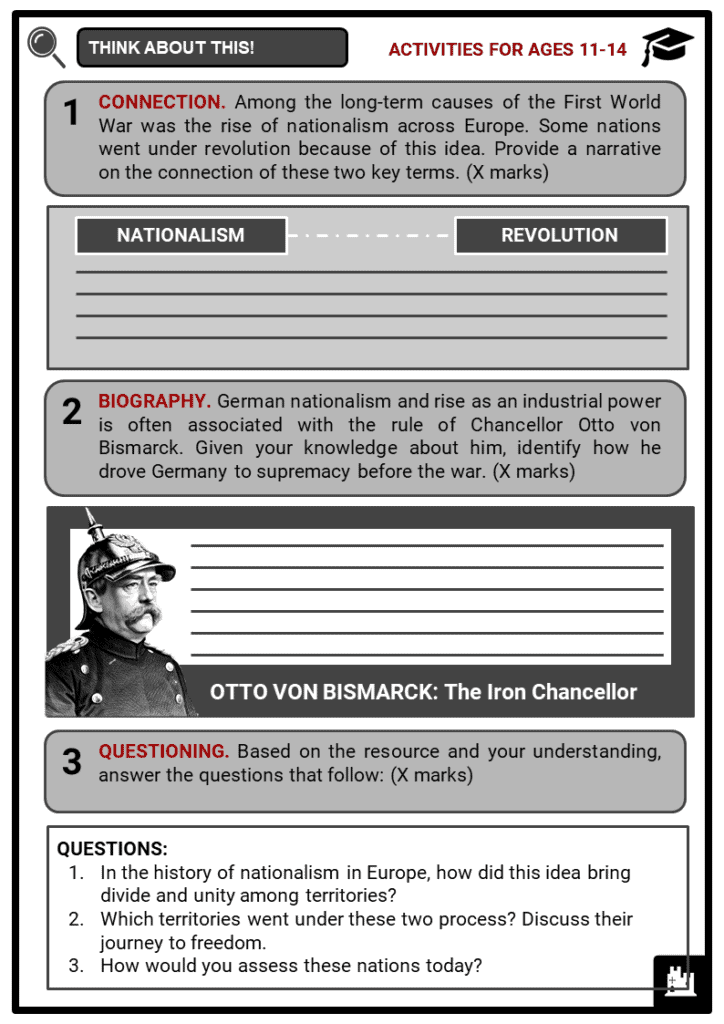 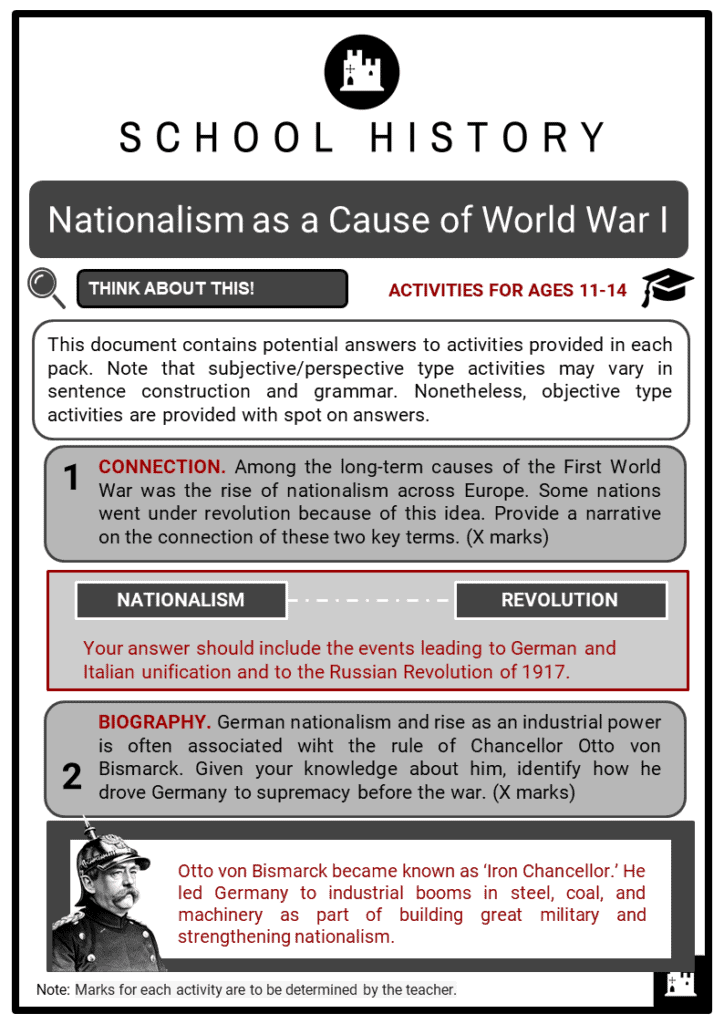 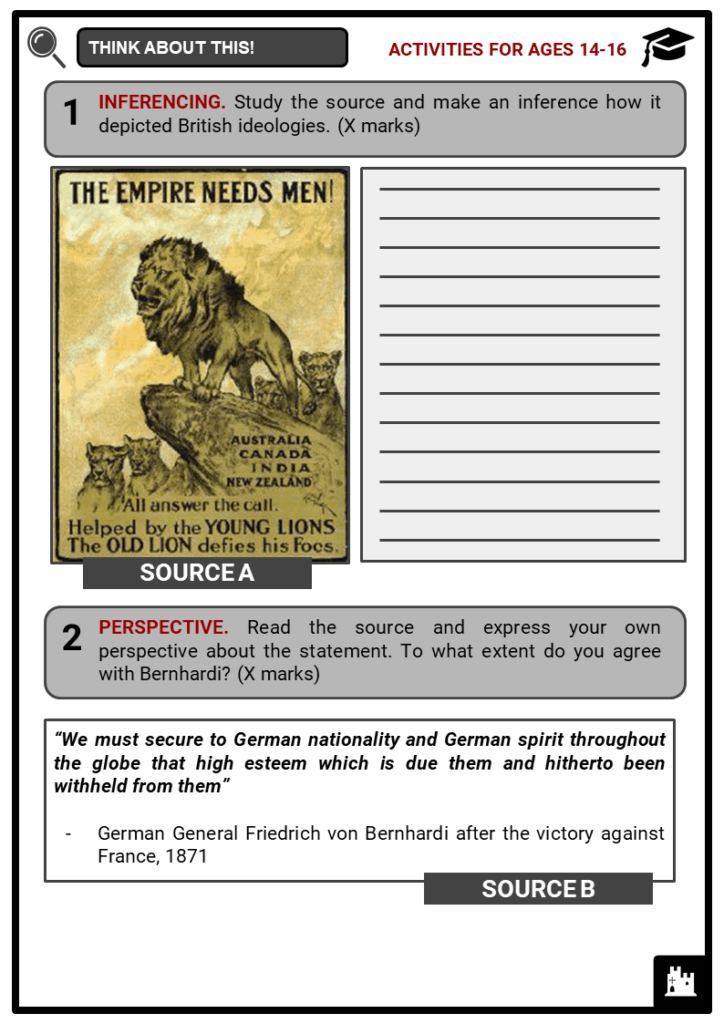 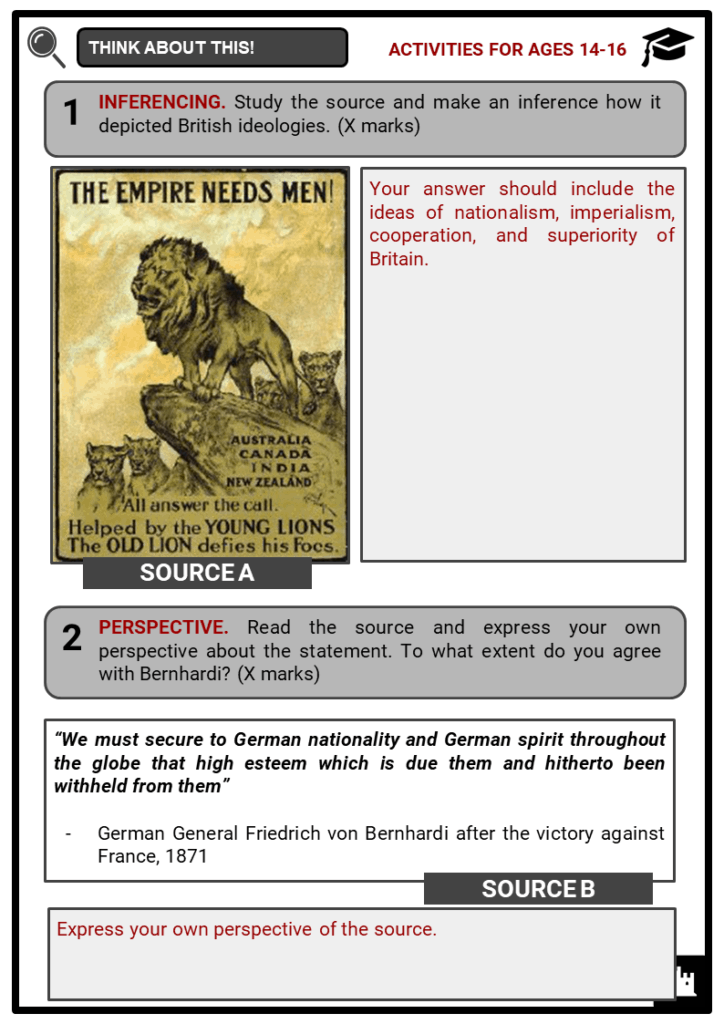 Nationalism was very common in early 20th-century Europe and is considered as a significant cause of World War I. Before the war, most Europeans believed in having some sort of cultural, economic and military supremacy and dominance over other nations. This was fuelled by provocative speeches, utterances or press reports. Front pages of newspapers were often headlined by nationalist rhetoric and exaggerated stories, such as rumours about rival nations and their horrible intentions. Nationalism was also significantly present in pop culture as it influenced literature, theatre and music. Leaders in power (royal families, politicians and diplomats) made no attempt to stop this trend and some even actively contributed to it.

These trends of nationalism also gave citizens overconfidence in their nation, governments and the military strength. It gave them a false sense of fairness and righteousness. It demonised rival nations, portraying them as aggressive, shrewd, deceitful, barbaric and uncivilised. Citizens now considered rival nations as threats who were plotting and scheming against them. This was mainly done by emphasising the negatives brought about by imperialism. Nationalists were convinced that if a war between rivals ever broke out, they would be victorious. Imperialism, militarism and nationalism contributed to the continental delusion that a European war seemed winnable.

The 19th century was one of comparative peace in Europe apart from the Crimean War between 1853 and 1856 and the Franco-Prussian War between 1870 and 1871. Citizens of England, France and Germany were used to colonial wars, which were wars fought against undeveloped and under-equipped opponents mainly in Africa and Asia. These wars were often wrapped up quickly because of their superiority. France, however, was defeated by the Prussians in 1871. Most of the nations considered as Europe’s great powers had not experienced a significant military defeat for more than half a century and they consequently felt invincible. For instance, the Brits believed that their naval power and economic might would give them the upper hand against any opposition and in any war.

The Germans had confidence in Prussian military efficiency and precision, their growing industrial base, new armaments and an expanding fleet of battleships and submarines. If a war was to occur, the German high command had supreme confidence in the Schlieffen Plan, which was a preemptive military strategy for defeating Germany’s eastern and western neighbours by fighting against Russia and France on different fronts and at different times. In Russia, the tsar believed his throne and empire was God-sent and that Russia’s incredibly large standing army of 1.5 million men would protect them. This army was the largest peacetime land force in Europe. Russian commanders also believed the empire’s vast population would give it an upper hand over the smaller nations of western Europe. A wall of concrete fortresses and defences running the length of their eastern border was the French’s consolation and they had full confidence that they could withstand any German attack.

Most European powers had grown almost drunk with patriotism and nationalism by the late 1800s. Britain, for example, had by this time enjoyed two centuries of imperial, commercial and naval dominance. The British Empire spanned one-quarter of the globe mainly through the colonies it had set up all over the world. They believed that they could never be slaves to anyone. The British had also been shrewd, as London had spent the 19th century advancing her imperial and commercial interests and had been avoiding wars at all costs. However, the unification of Germany in 1871, the speed of German armament and the self-righteousness of Kaiser Wilhelm II caused concern among British nationalists.

Controlled by nationalists, England’s ‘penny press’ fuelled this rivalry by publishing incredible fictions about foreign intrigues, espionage, future wars and invasions by the Germans. A great example is the Battle of Dorking in 1871, which was a form of ‘invasion literature.’ It was a wildly detailed tale about how German forces would take over England. By 1910, the streets of London were filled with dozens of tawdry novellas warning of German, Russian or French aggression using racial stereotyping and innuendo. Germans were depicted as cold, cruel and calculating, Russians as uncultured barbarians, the French as leisure-seeking layabouts and the Chinese were portrayed as a race of murderous, opium-smoking savages. The rules of these countries were mocked by penny novelists, cartoonists and satirists. Two of the most popular targets were the German Kaiser and the Russian tsar; both ridiculed for their arrogance and ambition.

Germany, compared to the likes of Britain, was a young nation. It was formed in 1871 through the unification of 26 German-speaking states and territories. German nationalism and xenophobia were no less intense but they came from different sources. Pan-Germanism (German nationalism) was the political factor that bound these different ethnic states together. After unification, the leaders of Germany relied on these nationalist sentiments to consolidate and strengthen their newly formed nation and to gain public support. Through the poetry of Goethe and the music of Richard Wagner, German culture was promoted and celebrated.

German militarism greatly backed their nationalism. The strength of the nation was purely defined and reflected by the strength of its military forces. The new Kaiser (leader of the German nation) was synonymous with his country. He was young, enthusiastic, nationalistic and obsessed with military power and imperial expansion, which was what the country wanted. Wilhelm II was proud of Germany’s achievements but uncertain about its future. Though he thought the British were avaricious and hypocritical, he envied the power they possessed and was desperate for national success. The main obstacle in his mind was Britain’s expansion. The British soon became a popular target for the German press and Britain was painted as expansionist, selfish, greedy and obsessed with money. This only got worse as anti-British sentiments intensified during the Boer War of 1899-1902, Britain’s war against farmer-settlers for control of South Africa.

As the great powers flexed their might and filled their people with a sense of righteousness and superiority, another form of nationalism was emerging in southern Europe. A different form of nationalism emerged, which was not about supremacy or military power but about the right of ethnic groups to be independent, autonomous and self-governed. This came about because the world was divided into spheres of influence and large empires. Many regions, races and religious groups wanted to be free from imperialism. A case in point, in Russia, more than 80 ethnic groups in Eastern Europe and Asia were forced to speak Russian, recognise the Russian tsar as their leader and practice the Russian religion. This eventually led to the Russian Revolution, which ended the reign of the royal family and tsars. Another example is China. For much of the 19th century, it had been economically exploited by European powers and Asian nations, namely Britain and Japan. Resentful Chinese people formed secret and exiled nationalist groups to change the situation in their country. Nationalist groups also played a major role in the weakening of the Ottoman Empire in Eastern Europe.

The nationalist movement that had the biggest impact was the outbreak of war by Slavic groups in the Balkans. Pan-Slavism was the belief that the Slavic people of Eastern Europe should be independent and have their own nation, and that they were a powerful force in the region. It was predominantly in Serbia where it had risen significantly in the late 19th and early 20th centuries. Pan-Slavism was mainly opposed to the Austro-Hungarian Empire and the control and influence it had over the region. Discontent was on a high and young Serbs joined radical nationalist groups like the ‘Black Hand’ because of Vienna’s annexation of Bosnia and Herzegovina. Groups like the ‘Black Hand’ wanted to drive Austria-Hungary from the Balkans to form a nation called ‘The Greater Serbia’. It was this intensified form of nationalism that led to the start of World War I through the assassination of Archduke Franz Ferdinand in Sarajevo in June 1914.