Al-Sadat was born in Mit Aboul Koum, a village on the Nile. He was born into a low-income family of thirteen children. His father was Anouar Mohammed El Sadate, a native Egyptian, and his mother, was Sit Al-Berain, of Sudanese origin. He studied at the Royal Military Academy in Cairo in 1936 and graduated in 1938.

In 1942, Al-Sadat was imprisoned by British troops for his activities against the British occupation. He had become a spy in favour of the Afrika Korps, and the Germans had promised to release Egypt in case of a German victory.

In 1945, he moved closer to the Society of the Muslim Brotherhood with whom he participated in attacks (such as the one against the Minister of Finance, Amin Osman). He was arrested and spent three years in prison.

Al-Sadat was expelled from the army in 1948 and therefore was not able to participate in the first Arab-Israeli war (in which Egypt lost). In 1950, he took part in the creation of the clandestine association Free Officers Movement, whose goal was to free Egypt from British control, and in July 1952, he participated in the coup d’état that dethroned King Farouk I.

From 1960 to 1968, after assuming some ministerial functions in the Egyptian government, he became president of the People’s Assembly. He was then appointed Vice President of the Republic by President Gamal Abdel Nasser on December 20, 1969.

Later, Al-Sadat will condemn Nasser’s policy, accusing him of lacking a clear vision for Egypt’s evolution and the well-being of its citizens.

On September 28, 1970, after the death of Gamal Abdel Nasser, he became President of the Republic. On October 5, 1970, Al-Sadat was appointed by the Arab Socialist Union as the sole candidate for the presidency of the United Arab Republic. His appointment by the party surprised those who saw as a possible successor to Nasser the pro-Soviet Ali Sabri, or the pro-American Zakaria Mohieddin.

On October 15, 1970, he was elected President of Egypt following a referendum in which he won 90% of the vote.

Determined to reorient the government’s policy towards capitalism, he quickly became involved with Nasser’s cabinet ministers. The ministers and the army chiefs were all arrested under the accusation of wanting to organise a coup d’état.

In 1973, Al-Sadat, together with Syria, led Egypt in the Yom Kippur War against Israel in an attempt to regain Sinai, lost in 1967, during the Six Day War.

For this purpose, Al-Sadat developed a military manoeuvre that positioned the Egyptian army in a favourable position without arousing Israeli suspicions. Meanwhile, he ensured sufficient military and logistical support, without his allies becoming aware of the imminent attack.

On October 6, the Day of Forgiveness (the holiest day for Jews), while Al-Sadat ordered the beginning of the hostilities with Operation Badr, the Israelis were attacked: despite the clear military superiority of the IDF, the Egyptian forces were determined to take back the territories lost in 1967.

Although Al-Sadat’s coup was successful, both Egyptians and Syrians could not contain the Israeli counter-attacks. Finally, a ceasefire was negotiated by the United States and the USSR (Israel and Egypt’s respective allies).

The general feeling that prevailed in the Arab world, and especially in Egypt, was that of a great victory. The Egyptians were again present in Sinai, having been expelled in 1967. Anwar Al-Sadat took advantage of this situation and became, after his rapprochement with the Americans at the end of the Yom Kippur War, a privileged interlocutor in the region. The Soviets suddenly lost one of their allies and Syria remained the last country in the zone to be still in their favour. 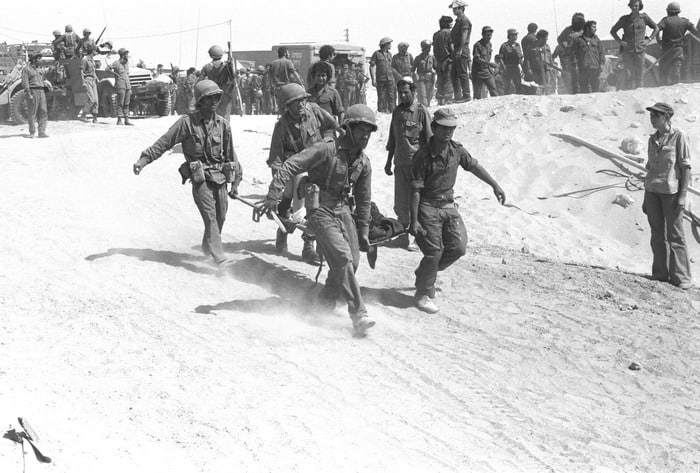 The Arab world emerged victoriously from this war because it proved, thanks to the military support of countries such as Algeria, Iraq, and Jordan, that it could count on its different allies under challenging times. Oil, used as a weapon, had also enabled the Arabs to give an international voice to their conflict since it forced the US and the Soviet superpowers to intervene.

In November 1977, Al-Sadat became the first Arab leader to pay an official visit to Israel. Here, he met Prime Minister Menachem Begin and spoke in front of the Knesset in Jerusalem. He made this visit after being invited by Begin and sought a permanent peace agreement. Many authorities in the Arab world reacted very unfavourably in regards to his visit, as Israel was considered a rogue state and a symbol of imperialism.

On September 17, 1978, the Camp David Accords were signed, and Al-Sadat and Begin received the Nobel Prize for Peace. Nevertheless, this agreement was extremely unpopular in the Arab and Muslim world. Egypt was then the most powerful Arab nation and an icon of Arab nationalism. By signing the agreements, Sadat defected to other Arab countries, which now had to negotiate alone. Al-Sadat’s actions were therefore considered a betrayal of Nasser’s pan-Arabism since he had destroyed the possibility of creating a united Arab front.

On the economic front, he launched the Infitah (openness) policy which aimed to attract foreign investment and promote relations with the United States. A class of new rich people was growing rapidly. In 1975, there were more than 500 millionaires in Egypt, but more than 40% of the population lived below the poverty line, and shantytowns develop around the capital. Moreover, the country accumulated great debt during the years of the Infitah. To reduce it, the IMF called for the abolition of all commodity subsidies, leading to riots in January 1977. The government involved the army, generating an unknown number of victims.

The reorientation of the economy led Sadat to seek the support of traditional rural elites, whose influence had declined under Nasser. Peasants were evicted from the disputed lands. In cities, to thwart the Nasserian and Marxist organisations, Al-Sadat released thousands of Islamist detainees and granted them political freedom. In 1972, the authorities transported Islamist militants into state vehicles to violently take control of the universities, and the leftist student leaders were arrested.

Therefore, the Gamaa al-Islamy was gaining power, and Egyptian society was becoming Islamised because of the strengthening of relations with Saudi Arabia. Finally, the Gamaa al-Islamy was divided into two factions: one was favourable to Sadat’s government and wished to pursue the Islamisation of the country through reforms; whereas the other faction was oriented towards terrorism. In the 1980s, the government favoured the departure of the militants of the latter faction to Afghanistan, with the financial support of Saudi Arabia.

In September 1981, Al-Sadat launched a significant offensive against intellectuals and activists. Communists, Nasserists, feminists, Islamists, university professors, journalists and members of student groups were imprisoned. He also detained a large number of priests and bishops of his Church. A total of 1,536 people were arrested. At the same time, Al-Sadat’s domestic support was disappearing due to an economic crisis.

On October 6, a month after the wave of arrests, Al-Sadat was assassinated during a military parade in Cairo by members of the army belonging to the Egyptian Islamic Jihad organisation (founded by former members of the Muslim Brotherhood). They opposed Sadat’s negotiations with Israel and his use of force.

Sadat was standing to receive his salute when Khalid Islambuli threw a smoke grenade. The three other conspirators then left a truck and threw other grenades. Islambouli fired the Egyptian president several times, assisted by other attackers. Islambouli was later found guilty and was executed in April 1982. Many present dignitaries were wounded, including James Tully, the then Irish Minister of Defence.

During the shooting, seven people were killed, including the Cuban ambassador and a Coptic Orthodox bishop, whereas other 28 people were wounded. Al-Sadat was transported into a military hospital where eleven doctors operated him. He was pronounced dead two hours after arriving at the hospital. Vice-President Hosni Mubarak, who was wounded in the hand during the attack, succeeded him. A record number of dignitaries from around the world were attending Sadat’s funeral, including the three former US presidents Gerald Ford, Jimmy Carter, and Richard Nixon. No Arab or Muslim leader attended the funeral.