School History > Notes > Background to The War of 1812

• The War was as a result of unresolved issues from the American Revolution between the US and Britain concerning trade and the impressment of American sailors.
• It was fought on the land, coasts and waterways of North America and the Atlantic Ocean.
• America claimed victory, and the biggest losers of the War were the Native Americans allied to Britain.

At the Conclusion of the Revolutionary War, America and Britain entered into a treaty, negotiated by the Supreme Court Justice John Jay commonly referred to as Jay treaty and officially as the treaty of Amity Commerce and Navigation of 1794. The agreement addressed most of the issues surrounding the war but left out the problem of impressment of American sailors by the British. 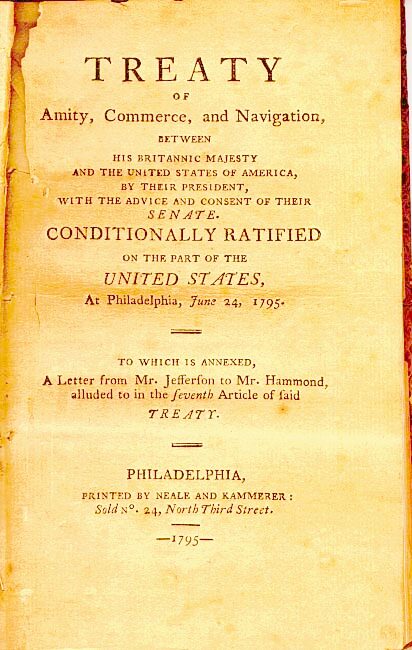 Impressment happened during the Revolutionary War and also during the Napoleonic Wars between 1803 and 1815. During the wars both the French and British impressed on American sailors to fight on their respective country warships. The War of 1812 emerged from the Napoleonic wars between France and Britain.

Impressment was a Royal Navy policy permitted by the Crown, to enable the Navy, meet their demand for manpower. The policy was limited to British citizens. Initially, it was common for British Navy deserters to escape to American commercial vessels where there was better food and accommodation. Consequently, impressment was in part a measure to find deserters and bring them to service or punishment. However, the practice was applied to American citizens. At the time, most of Americans were born in Britain but naturalised in the US, and the Navy worked from the principle of “once an Englishman, always an Englishman.” Often, ship captains would send “press gangs” to find able-bodied men in brothels and pubs and draft them into service. The Royal Navy also stopped neutral commercial vehicles to inspect the crew list and remove British sailors for service including naturalised Americans.

Three deserters from the British warship HMS Melampus enlisted aboard USS Chesapeake. The British Consul in Norfolk demanded that the men be returned, but the US government refused.

The men were American citizens impressed by the British. The British government through Vice admiral George C. Berkley then gave orders to all their warships at sea to stop and inspect USS Chesapeake if encountered at sea.

In 1807, the British warship HMS Leopard attacked the USS Chesapeake. The British then boarded the ship and took the three naval sailors further precipitating a war.

Economic Reasons for the War

All the three countries, the US, UK and France at the time wanted to control trade in the Atlantic for their respective benefit. Undermining the economic interest of the enemy was a primary objective for UK and France. At this time, America was engaging in a lucrative re-importation trade of goods from the Caribbean colonies of British and France to Europe. French controlled the European midlands while Britain was controlled the sea.

The UK issued several Orders – in – Council that decreed if a neutral nation transported goods from an enemy nation, it would be taken as an act of war. Further, the order also decreed that neutral countries could only carry goods transported during the times of peace. The French, on the other hand, outlawed any trade with the enemy country. America was caught in the middle, and compliance with one country set of requirements was a violation of the other country requirement. The British rule also legalized the seizure and inspection of American ships.

In response to the Chesapeake incident, President Jefferson imposed an embargo stopping American ships from leaving their ports until the French and the British undertook to stop impressment. The aim was to undermine the British and the French economies, by causing among other, loss of jobs due to the loss of the American market.

The Embargo Act of 1807 by Jefferson caused an economic depression in the US, destroying business especially along the coast where the shipping industry thrived. Jefferson choose the Embargo to maintain neutrality and not get entangled with the tensions between the French and the British.

However, the embargo hurt the American economy more than it did the British or the French economy. Further, smuggling became common owing to American reliance on the British and French commodities. Industrialists were also happy with the embargo because it created an artificial scarcity that enabled them to increase the prices of their products. Additionally, in New England, soldiers confessed to preferring impressment over the ban on the trade of British commodities.

At the end of his second term in 1809, Jefferson enacted the Non-Intercourse Act that limited the embargo to vessels whose destination were British and French ports. The impact of the Intercourse Act was similar to the Embargo Act, and it proved to unenforceable. Under Madison, Congress passed another measure, called the Macon’s Bill Number 2, lifting the trade embargo against the French and British. The Act also indicated that any interference with American shipping by either of the two Countries would cause the US to trade with the compliant party at the exclusion of the other.

France, was the first to comply causing the US to reestablish the embargo against Britain, further edging the countries to war.

The Royal Proclamation of 1763, had forbidden the colonists in the Americas from moving into the west, to avoid clashes with the Native population occupying the region. After the Revolutionary War, the manifest ideology and the Louisiana Purchase, westward expansion was a federal policy. However, the Native Americans were resistant to attempts to take over their land and undermine their culture. In these efforts, Britain was an ally.

President Jefferson regime had three many policy approaches on matters concerning the Native Indians. One was that Native Americans were required to abandon their so-called backward culture for the subsistence farming lifestyle adopted by the majority of the white folk. The second was the federal, state governments and settlers worked to trick the natives into unsustainable debt with the intention of negotiating their land in exchange for the debt. The third was the forceful removal, when the other two measures failed, the Cherokee and the Shawnee especially who refused assimilation or couldn’t be tricked into debt were forcefully removed from their ancestral lands.

The Algonquian and the Iroquoian received weapons from the British traders to stifle the westward expansion. The British interference was against the Treaty of Paris that failed to account for the Natives. Again, this further edged the parties closer to war.

In 1811 a group of Democrats known as the “war hawks” became prominent in the US House of Representatives. The group was led by Henry Clay and John C. Calhoun were offended by the “British insults to American honour.” The war hawks advocated for war, but the Federalists from the Northeast were fearful of the adverse effects the war would have on their maritime trade ventures. Majority of the Federalists at this time were bankers and businessmen who morphed into the Republican and Whig party after the war.

On 18 June 1812 Congress after a narrow vote, gave President Madison permission to declare war against the British after Madison recounted the US grievances in Congress. During the war from 1814 – 1815 the federalist party held the Hartford Convention to discuss the possibility of a session.