Catherine of Aragon was the first wife of Henry VIII. She was born at Alcalà (Spain) on December 16, 1485. She was the fifth and last daughter of Ferdinand and Isabella of Spain. Catherine was strongly attached to her mother Isabel. Catherine’s birth name was Catalina, in honour of her maternal great-grandmother. 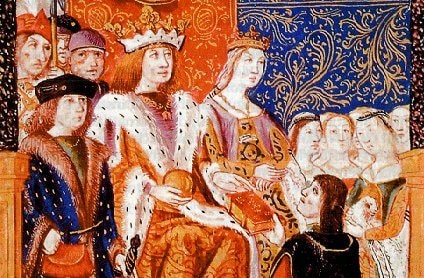 Due to the war against the Muslims, Catherine and her family were forced to travel extensively across Spain.

She was educated by some of the most prominent humanists of Europe, including Pascual de Ampudia and Andrés de Morales, two Dominican Reformers; Alessandro Geraldini, and Antonio Geradini (Davies and Edwards 2004). Catherine’s studies were centred around the learning of Classical and Modern Languages.

In 1501 she was sent to England as the bride of Prince Arthur, eldest son of Henry VII. However, Arthur died in 1502. Following the death of her husband, she was assigned a house in London, the Durham House, where she was surrounded by Spanish servants: here, she could live as dowager princess of Wales (Davies and Edwards 2004).

However, because of Ferdinand’s ambition who wanted Spanish influence to dominate England’s foreign policy, Queen Isabella was able to ‘obtain a disposition’ from Pope Julius II (Burke 2018). Catherine was betrothed to Arthur’s younger brother, Henry, nearly six years her junior.

A papal dispensation was obtained for the marriage, which was solemnised on June 11, 1509. Catherine bore five children, all of whom except the youngest, Mary, born in 1516, died in infancy.

Catherine of Aragon demonstrated a keen interest in education: in fact, after having reached a proficient level in English, she undertook a more serious study of Latin. Moreover, she often visited Oxford and Cambridge, she ‘protected the interests’ of Queen’s College and St. John’s College; she provided poor schools with financial support, and exported Erasmus to stay for a longer amount of time in England (Erasmus dedicated the Christiani Matrimoni Institutio to Catherine) (Davies and Edwards 2004). 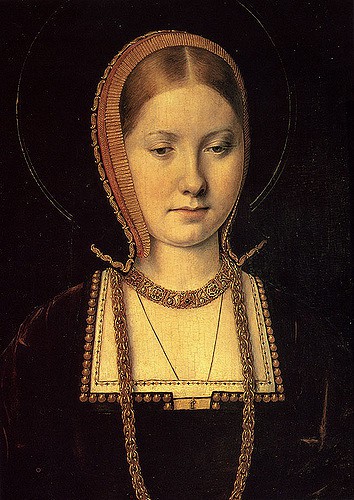 Catherine was a very religious woman who regularly confessed her sins in Spanish and demanded the dedication of five-hundred masses ‘for her soul’ once dead (Davies and Edwards 2004). In essence, her religious duties were entered around ‘mass, prayer, confession, penance, in a manner characteristic of the Spanish court’ (Davies and Edwards 2004). Her favourite religious order was that of the Franciscans, who were popular in Spain.

By the early 1520s, when the alliance with Spain had cooled and it had become clear that Catherine would never provide a male heir, Henry began to look for another solution. He asked for a declaration of nullity from the Pope Clement VII, on the ground that the dispensation had been illegal. Catherine fought the suit bitterly, finally appealing the case from the legislative court in London to Rome (1529). The Pope, who was in the power of Emperor Charles V, Catherine’s nephew, refused Henry’s request and in 1536 pronounced his marriage to Catherine valid. Meanwhile, in 1531, Henry had left Catherine at Windsor and set up a separate establishment. In 1533 her marriage was declared null and void by Archbishop Cranmer, and she was removed in semi-custody to Buckden in Huntingdonshire. In 1534, she was transferred to more comfortable quarters at Kimbolton, where she died on January 7, 1536. 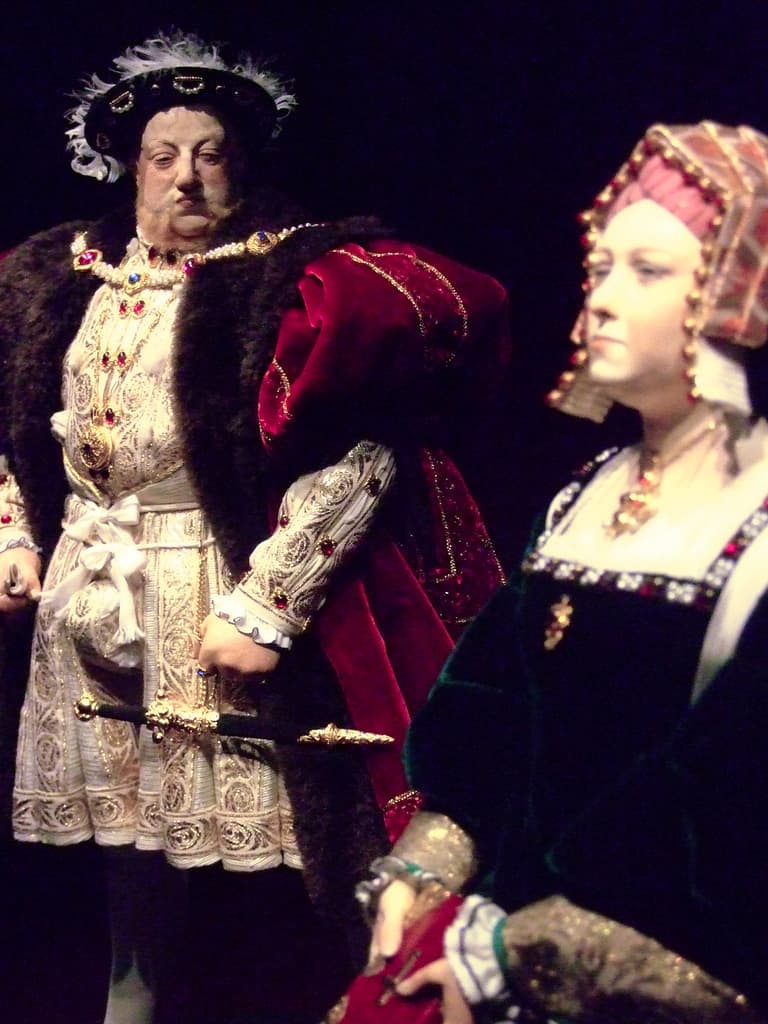 By 1525, Catherine was already forty, and after five pregnancies and one only surviving child, the future Queen of England Mary I, prospects of another pregnancy seemed highly unlikely Burke 2018). In fact, in 1510 Katherine miscarried a baby girl; the following year, on New Year’s day, she gave birth to a boy named Henry (who died on February 22); another child had died immediately after being born, and so on (Davies and Edwards 2004). Henry VIII spent the next eight years of his life trying to end his marriage with his spouse by making references to a biblical statement which claimed that marrying one’s brother’s widow was prohibited. Since at that time there were no translations of the Ancient Greek and Latin versions of the Old Testament, Burke (2018) offers his readers the possible quotes that Henry was referring to:

As a consequence, it is easy to understand how Henry VIII felt like after twenty years of marriage, he was being punished by God for having acted against the Lord’s word when marrying Catherine of Aragon. 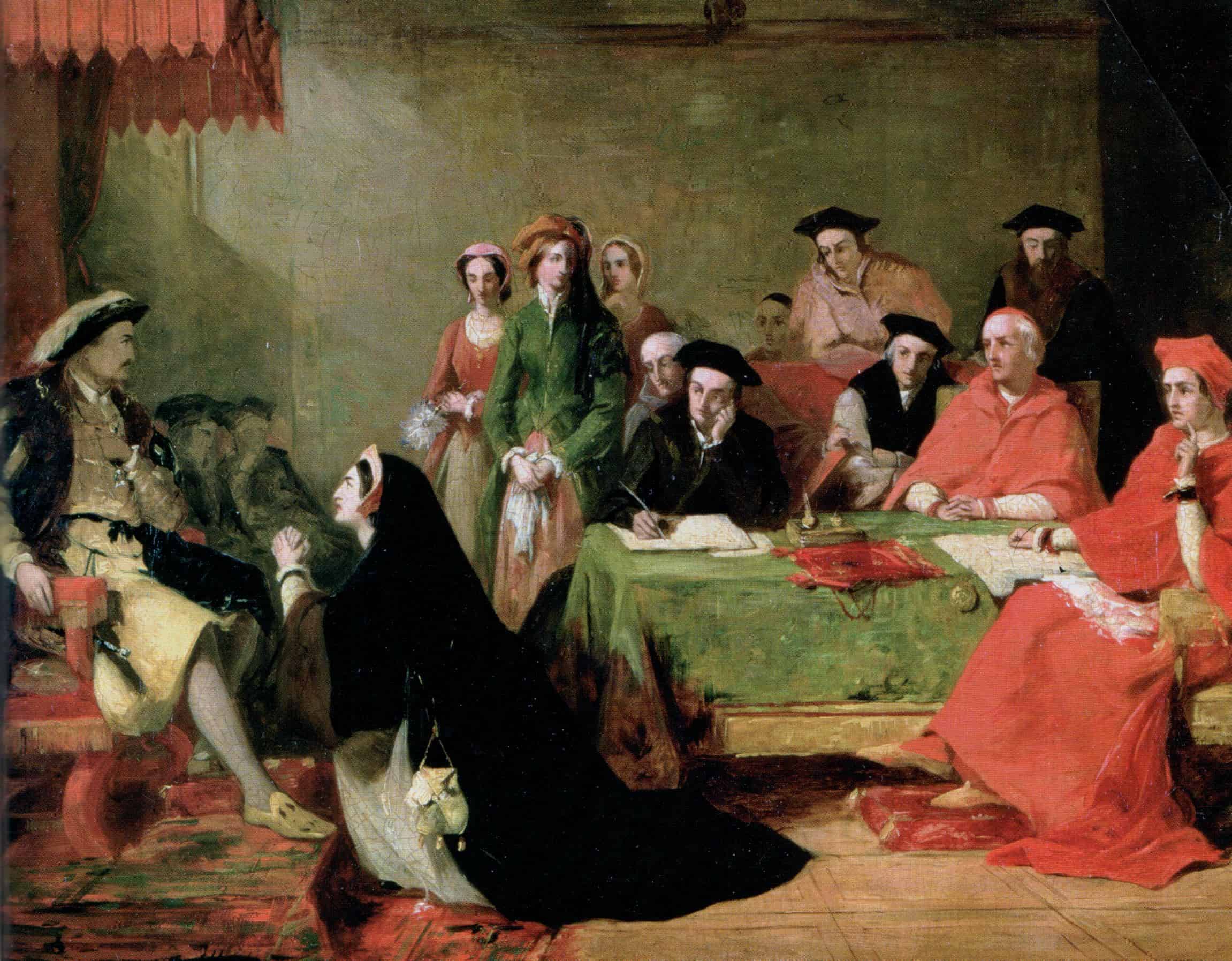 However, according to the pope, Deuteronomy 25:5 claims that ‘If a man’s brother dies without a son, his widow must not marry outside the family; instead, her husband’s brother must marry her and sleep with her. The first son she bears him shall be counted as the son of the dead brother’ (Burke 2018).

Although Henry VIII was determined to marry Anne Boleyn, Catherine of Aragon was strongly against their divorce. In fact, her sorrow is evident in the speech she gave at her trial at Blackfriars on June 1529, in which she recalls their relationship and pleads Henry for a reconsideration of his choice:

‘Sir, I beseech you for all the loves that hath been between us, and for the love of God, let me have justice and right, take of me some pity and compassion, for I am a poor woman and a stranger born out of your dominion, I have here no assured friend, and much less indifferent counsel: I flee to you as to the head of justice within this realm. Alas! Sir, wherein have I offended you, or what occasion of displeasure have I designed against your will and pleasure? Intending (as I perceive) to put me from you, I take God and all the world to witness, that I have been to you a true and humble wife, ever conformable to your will and pleasure, that never said or did anything to the contrary thereof, being always well pleased and contented with all things wherein ye had any delight or dalliance, whether it were in little or much, I never grudged in word or countenance, or showed a visage or spark of discontentation. I loved all those whom ye loved only for your sake, whether I had cause or no; and whether they were my friends or my enemies. This twenty years I have been your true wife or more, and by me ye have had divers children, although it hath pleased God to call them out of this world, which hath been no default in me. And when ye had me at the first, I take God to be my judge, I was a true maid without touch of man; and whether it be true or no, I put it to your conscience. If there be any just cause by the law that ye can allege against me, either of dishonesty or any other impediment to banish and put me from you, I am well content to depart, to my great shame and dishonour; and if there be none, then here I most lowly beseech you let me remain in my former estate, and received justice at your princely hand’ (Catherine of Aragon 1529).

Henry VIII was not inclined to hear to her speech, in fact, he attempted to make her rise from her knees at least twice; and as soon as she finished speaking, Catherine did not return to her seat, but she walked out of court with her General Receiver, Master Griffith (Abernethy 2017).

Thanks to her dramatic speech, Catherine one the court case, and the Bishop of Winchester stated that the king and queen’s marriage could be dissolved only by the will of God. 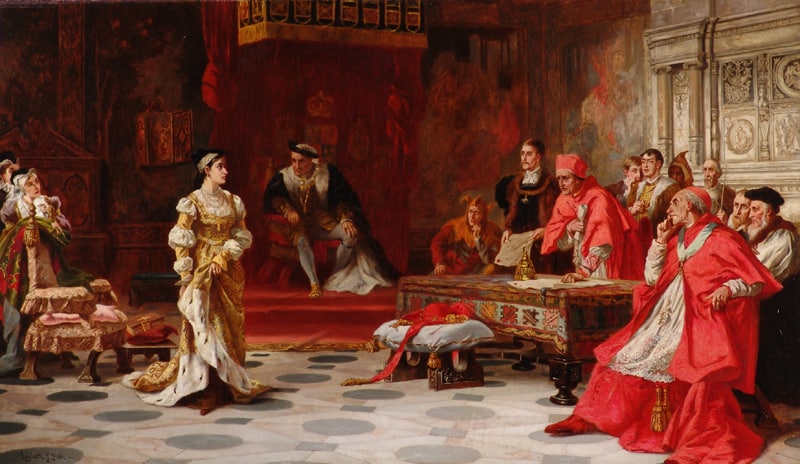 When the pope refused to allow the divorce between Henry VIII and Catherine of Aragon, the Archbishop of Canterbury, Thomas Cranmer, took the reins of the situation and declared that since the king’s marriage was ‘null and void’ in the first place, there was no need to divorce: therefore, their marriage was simply annulled (Burke 2018).

The Break with the Church of Rome

[2.] Burke, B. (2018). Henry VIII did not divorce Catherine of Aragon. Noozhawk. [online] Available from: https://www.noozhawk.com/article/brian_burke_column_172_henry_viii_did_not_divorce_catherine_of_aragon