The growing industrialisation of Europe’s cities had led to a new way of living for the working poor in the 19th century. As more and more people flooded in from the countryside to find employment in the factories and mills, city streets became full of hastily built, overcrowded dwellings. Disease spread rapidly through these packed living quarters, and large families often lived in one room, with no easily accessible clean water and a constant hunger which meagre wages could not supply enough food to satisfy. Meanwhile, the owners of the factories and mills where these people laboured grew rich. Movements started to grow to give more power to ordinary people and give them the chance to improve their lot in life. 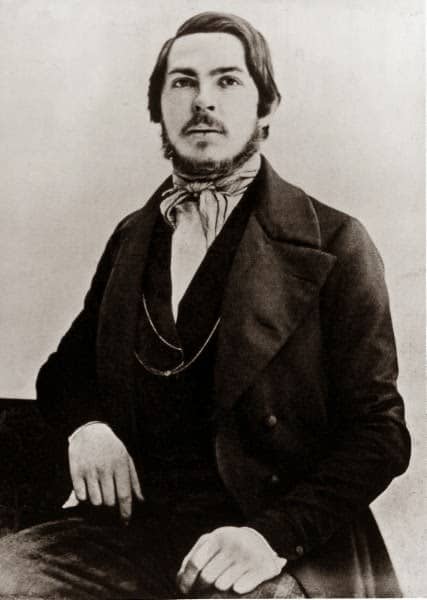 Into this world stepped Friedrich Engels, a factory owner’s son. Despite coming from the moneyed class that was benefitting from industrialisation, Engels had a revolutionary spirit. Dismayed by the conditions that workers in his family’s business were living in, he set about trying to campaign for a better system. Along with his close friend Karl Marx, Engels became one of the most important early figures of the communist movement. Communists believed that there should be no class system and no private property.

Friedrich Engels was born on 28 November 1820 in Barmen, western Germany, which at that time was part of the Kingdom of Prussia. His family were wealthy factory owners and were keen that Friedrich enter the family business as soon as possible. The young Engels did not want to join the company and would have preferred to continue in education a little longer, but his parents forced him to leave school at 17. Engels became an apprentice, learning his trade first at his family firm and then at an export company in Bremen. Away from home, Engels began to read extensively and became interested in the teachings of German philosopher G.W.F. Hegel. One of Hegel’s most notable works was The Philosophy of Right (1821), in which he describes the importance of the state in allowing individuals to exercise free will. Engels began his own writing career, publishing articles condemning the effects of industrialisation. He used a pseudonym to avoid bringing shame on his family.

In 1841, Engels commenced military service in an artillery unit of the Prussian Army. Based in Berlin, he was able to attend lectures at the university and join the Young Hegelians. He continued to write newspaper articles. It was during his time in Berlin that Engels became a communist, and also an atheist, something that would have been very shocking to his devoutly Protestant family. He believed that a communist revolution was inevitable somewhere in Europe, due to the oppressed conditions of its workers and their vast numbers. Surely if they chose to, the working class could rise up and overthrow the privileged few that currently lived off their labour?

Theorising that England would be a likely location for a communist revolution, Engels took the opportunity to go and work in one of his family factories in Salford in 1842. He stopped en route at the offices of a newspaper he had been writing for, the Rheinische Zeitung in Cologne. Here for the first time, he met the paper’s editor, Karl Marx, who shared a lot of Engels’ views on the class system. 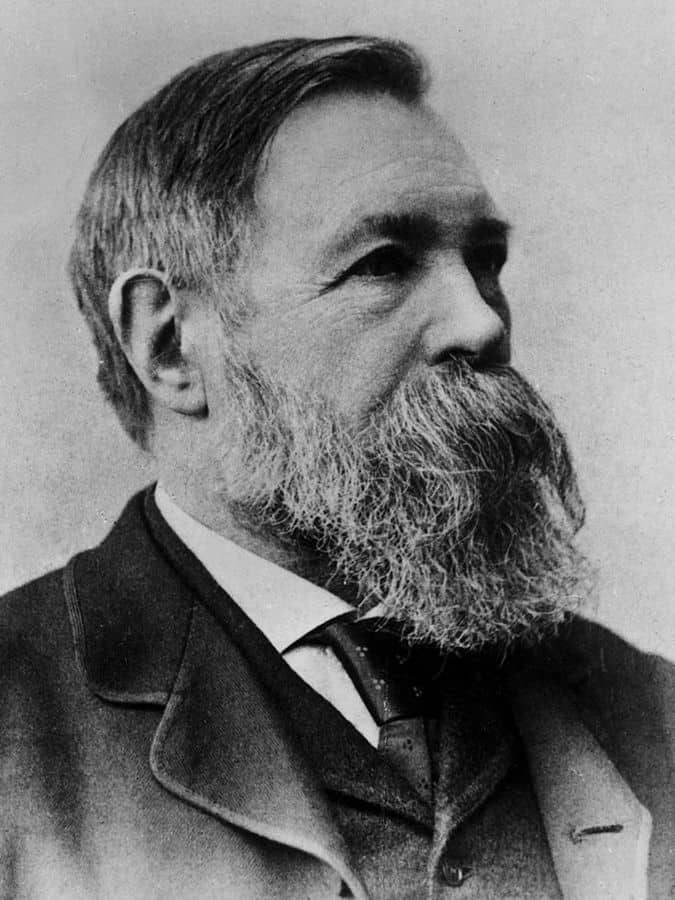 In Salford, Engels met an Irish woman, Mary Burns, who worked at his factory. She was a radical thinker and became his guide around the streets of Salford and Manchester, helping Engels research a series of articles about the lives of the working poor. The two fell in love and embarked on a long-term relationship, although since neither believed in the institution of marriage, they never became husband and wife.

At that time, Manchester was a hotbed of radical activity, and Engels enthusiastically integrated into the scene. He attended meetings of local socialists and the Chartist movement, which was campaigning for Parliament to enforce better conditions for workers. Engels had been horrified by the living conditions he saw on his tours with Mary Burns. He described the people in the crowded, filthy slums as having reached the depths of human misery. He saw their condition as the natural outcome of the class war that was being waged on the working class by the middle classes. Engels even noted that the streets of Manchester themselves had been built to enable this class war – it was possible for the middle classes to live in pleasant, healthy suburbs and travel into the city centre to shop, without having to notice the grim hovels just a stone’s throw away.

Remaining in Salford from late 1842 to 1844, Engels gathered plenty of material for a series of articles on the subject of the working class in England. He decided to return home to Barmen and turn his articles into his first book, The Condition of the Working Class in England, published in Germany in 1845. On the way back to Germany, Engels stopped off in Paris to meet Karl Marx. Marx had admired Engels’ articles about Manchester and was interested in his idea that the working classes would lead a revolution to overthrow capitalism. This meeting cemented a collaboration between the two that would last for decades and form the cornerstone of a hugely influential branch of communism – Marxism.

In April 1845, Engels moved to Brussels to join Marx, who had been expelled from Paris by the French authorities after pressure from the Prussians. Brussels was a more liberal city, and Engels and Marx were able to join up with many other socialist German expatriates and form what became known as the Communist League. The League requested that Engels and Marx write a document explaining the principles of communism – this would be the famous Communist Manifesto, published in February 1848. Among the aims of communism was the abolition of the class system, achieved by the working classes rising up to overthrow the bourgeoisie (the middle classes who owned the places where the lower class worked), and the ending of all private property. This latter aim was extremely controversial, but Engels and Marx justified it by saying that the working class had next to no property as it was, and so had little to lose.

1848 saw a tide of revolution sweep across Europe, and Engels and Marx returned to Germany to be at the heart of it. They produced a new daily revolutionary newspaper, Neue Rheinische Zeitung, which Engels’ own mother disapprovingly credited with stoking the fires of revolution in Germany. Engels actively took part in revolutions in Hungary and parts of Germany, but after the failure of the German revolutions, he was a wanted man.

Near the end of 1849, with his parents threatening to cut him off from the family finances, Engels agreed to return to work at the factory in England. This enabled him to evade the German authorities and also to make money to fund the continuing activities of himself and Karl Marx. Marx was now living in London, in poverty, and he and his family relied on Engels’ wages to survive. Engels himself was under surveillance even in England, and so he and Mary Burns had a network of houses around Manchester and Salford that they could move between when necessary. Mary died in 1863, and Engels would later begin a relationship with her sister, Lizzy.

In 1864, Engels became a partner at his father’s company. For many years he had been living a double life, contributing to capitalist oppression during the day and working to bring about a communist revolution by night. In 1869 he was able to sell his stake in the company and retire, financially independent and able to spend all his time writing radical articles and working with Marx on books. Engels moved to London in 1870 to be closer to Marx for this purpose. 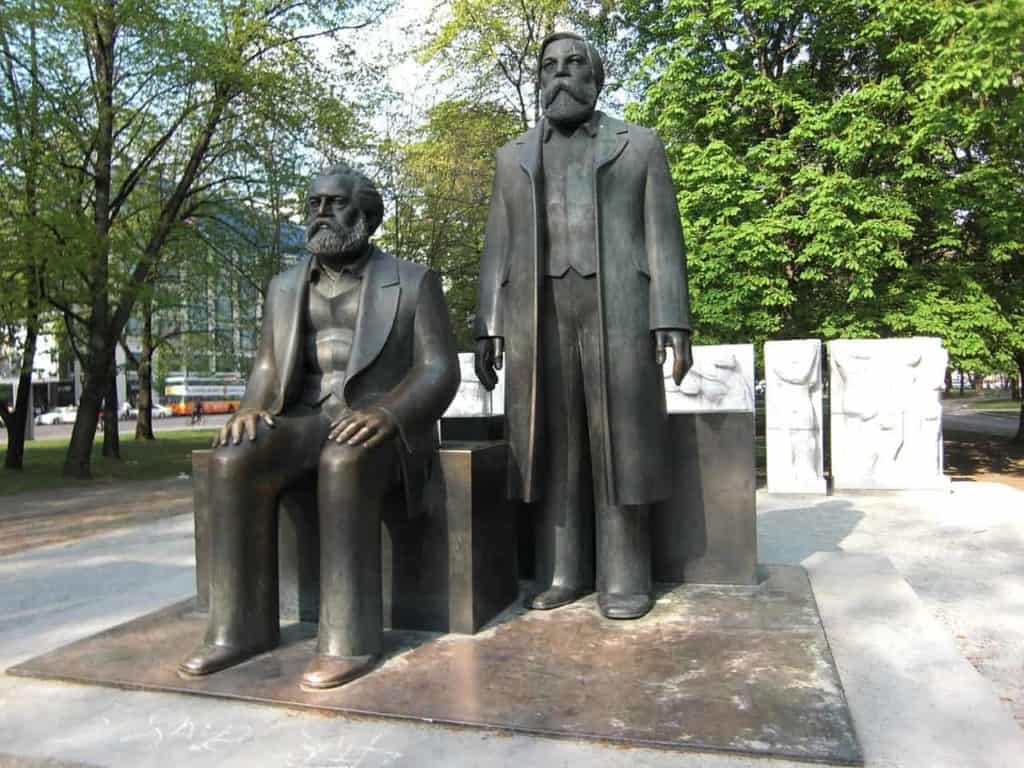 After Karl Marx died in 1883, Engels became the curator of his friend’s intellectual legacy, editing and republishing Marx’s work and even completing the third volume of Marx’s seminal Das Kapital. He also continued to publish his own work, including The Origin of the Family, Private Property and the State in 1884.

Friedrich Engels died of cancer in 1895. He is now recognised as one of the founding fathers of Marxist communism and was venerated in communist countries like the USSR.

Born in 1820 to a wealthy German family, Friedrich Engels as a young man was moved by the plight of the working poor as a result of industrialisation. While on military service in Berlin, he became a communist. He believed that England had the potential for a communist revolution, and so travelled there to work at his family’s factory by day and research his ideas at night. His experiences among Salford and Manchester’s working poor led to his first book, The Condition of the Working Class in England (1845). Around this time, Engels also became a close friend and collaborator of Karl Marx, another German communist. The two encouraged and took part in revolutions against the German establishment in 1848, but when these failed they were forced to flee to England. Here Engels returned to work at the factory so that he could send Marx money and enable him to continue writing. Eventually, Engels was able to retire from the business with enough money to devote the rest of his life to writing. Following Marx’s death in 1883, Engels continued publishing and promoting his friend’s work, as well as his own. Friedrich Engels died of cancer in 1895. His work was hugely influential in inspiring later communists like Lenin in their own revolutionary activities.