The predecessor of the Haganah was the HaShomer (Guards’ Guild), founded in 1909, consisting of a group of emigrants who guarded the settlements in exchange for an annual wage. Never before did the group exceed 100 members. 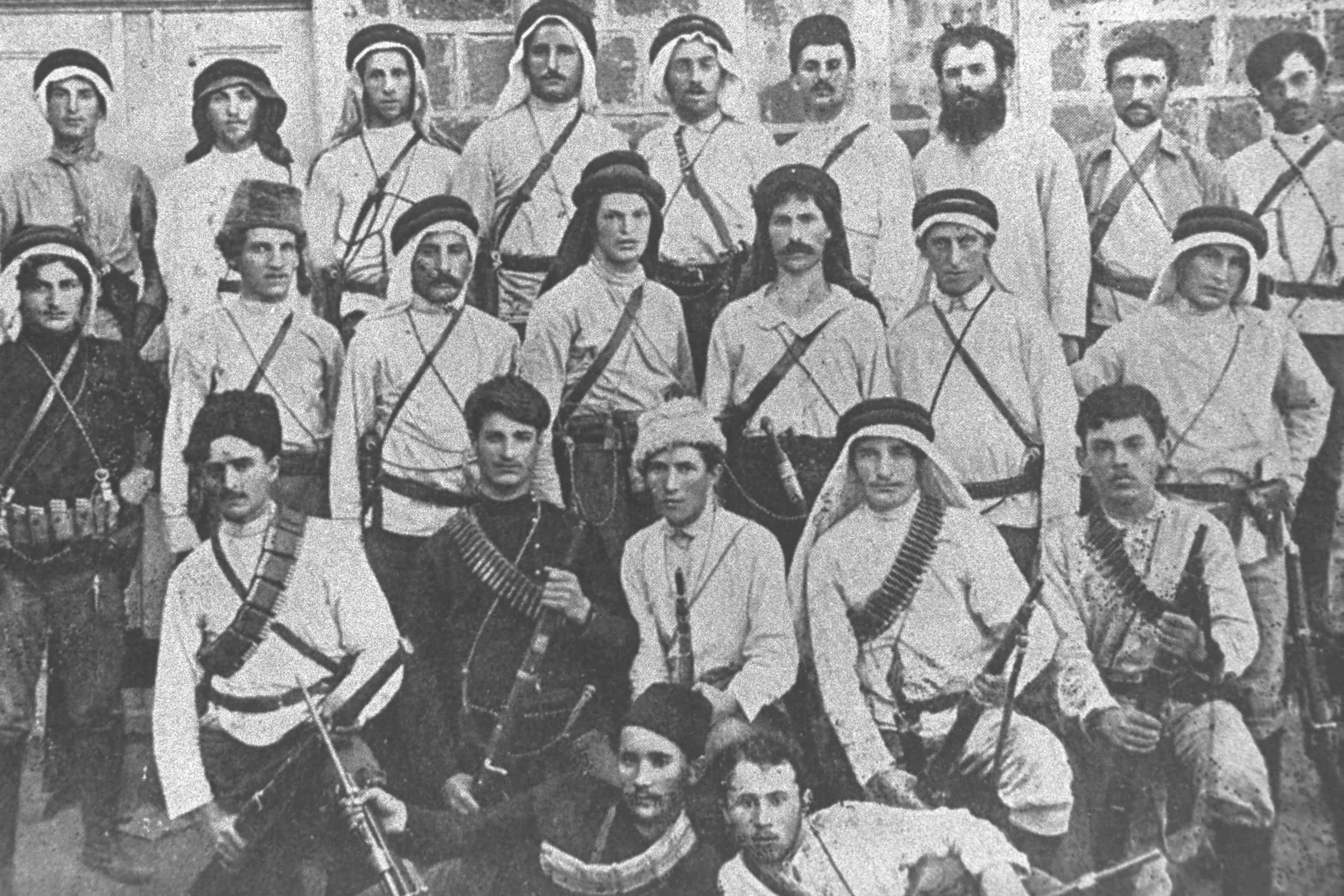 After the Arab revolts of 1920 and 1921, the Jewish leaders decided that its farmers and their settlements needed protection from the Palestinian Arabs. It was thought that the British did not intend to confront the Arabs in regards to their attacks on Jews in Palestine. The role of the Haganah was 1. to protect Jewish Kibbutz and farms, 2. prevent their inhabitants from being attacked by Arabs and 3. repel the attackers.

In the period between 1920 and 1929, the Haganah lacked a strong centralised authority and acceptable coordination. The units of the Haganah were localised on the extreme part of the territory and had very limited weapons. Their defence system mostly consisted of Jewish farmers who watched over their farms and their kibbutzim.

In 1929, the Arab uprisings in Palestine led to the death of 133 Jews and 116 Arabs. Moreover, the city of Hebron was faced with a sort of ethnic cleansing since 70 Jewes were killed and other 500 people were forced to flee.

At this point, the role of the Haganah changed abruptly. It became the largest organisation that comprised almost all the youth and adults of the Jewish settlements, as well as thousands of city dwellers. The Haganah also acquired foreign armament and began to develop workshops that taught how to create hand grenades and basic military equipment. The group eventually turned their untrained militia into an efficient army.

In 1936, the Haganah amassed 10,000 men ready for mobilisation, against 40,000 reservists. During the Great Arab Revolt of 1936-1939, it actively protected British interests and countered Arab insurgents. Although the British administration did not officially acknowledge the Haganah, the British security forces cooperated with them and formed a Jewish auxiliary force, the Jewish Settlement Police, as well as special night squads. The experience gained during the Great Insurrection was fundamental throughout the Arab-Israeli war of 1948. 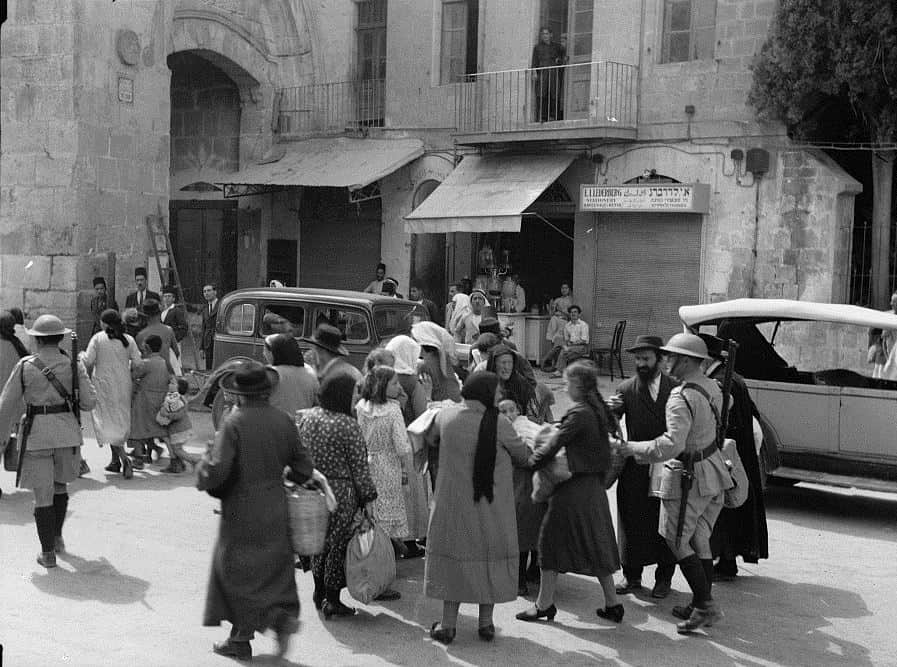 In 1937, the adherents to the right branch of the Haganah  formed the Irgun Zvai Leumi (National Military Organisation), more simply known as Irgun. When Haganah faced the British and Arabs, they were dissatisfied with the current policies.

In 1940was born the Lohamei Herut Israel (Fighters for the freedom of Israel, or Lehi) was born from the Irgun: this group was contrary to the policy of collaboration with the British established by a 1940 truce. The Irgun and the Lehi became well known for their clandestine fighting methods which included the use of terrorism.

The Irgun, however, assumed an even more extreme position starting in 1944 and began bombing British installations. 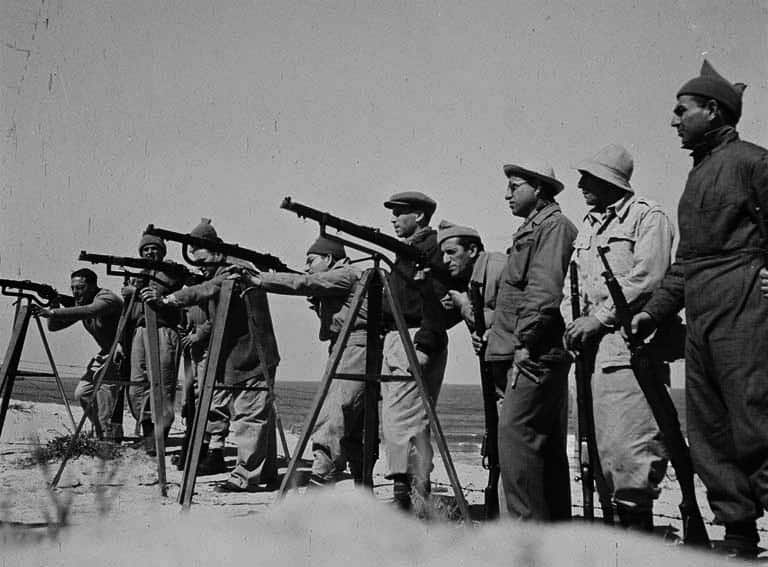 In the early years of the Second World War, the British authorities asked the Haganah to cooperate again. After Rommel’s defeated in the Second Battle of El Alamein in 1942, the British backed down in regards to their total support of the Haganah.

In 1943, after a long series of requests and negotiations, His Majesty’s army announced the creation of the Jewish Brigade. While the Jews in Palestine had been given permission to enlist in the British army as early as the 1940s, that was the first time that the Jewish military units fought in the war with a Jewish flag. The Jewish Brigade consisted of 5,000 soldiers and was deployed in Italy in September 1944. The Brigade was exiled in 1946.

Altogether, more than 30,000 Jews in Palestine served in the British army during the war.

On May 19, 1941, the Haganah created the Palmach (the acronym for Plugot Mahatz), a paramilitary section that aimed at training young people. It was never of considerable size and in 1947 it had only five battalions (about 2,000 men). However, its members received not only basic physical and military training; they also acquired leadership abilities that allowed them to take command positions within the Israeli armed forces.

In the summer of 1947, the British made a proposal to the UN in regards to their mandate on Palestine. The UNSCOP (United Nations Special Committee on Palestine) began to elaborate a plan for the division of Palestine into a Jewish state and an Arab state.

From this date, David Ben Gurion, president of the Jewish Agency and therefore political leader of the Haganah, ordered to prepare for a war against the Arab States. Weapons (including heavy weapons) started to be purchased in Europe and North America. Some were brought to Palestine clandestinely (since the British opposed it), others were stored abroad while waiting to be brought to Palestine. The weapons would be transported to Palestine after the creation of Israel on May 15, 1948. The Haganah, in particular, had a fruitful relationship with the Soviet Union. Indeed, Stalin encouraged the departure of the British from the region, and, for this reason, decided to support the Zionist movement.

Israel was created on November 29, 1947, following the United Nations’s vote. The official proclamation of the state was scheduled for May 15, 1948.

From November 30, 1947, to May 15, 1948, a civil war between Arabs and Jews living in Palestine broke out. The British forces present in the country were supposed to maintain order, however, their contribution was largely passive. London did not want to support the Arabs of Palestine, and even the United States had voted in favour of Israel. However, hundreds of British were killed between 1944 and 1947 by the armed Zionist organisations (especially the Irgun and the Lehi).

The civil war unfolded in two stages. From the end of November 1947 to the end of March 1948, the Haganah was in a defensive position against the Arab attacks. Jewish towns and villages were struggling to maintain their communication routes since roads were particularly easy to attack. From late March 1948 until May 15, the Haganah launched a series of offensives in the coastal strip and around Jerusalem.

Finally, the irregular Palestinian forces were defeated, and the Jewish areas were secure. Arab populations in the area were starting to leave.

The role of Haganah remains controversial. The “Dalet Plan” or “Plan D” adopted by the Jewish Agency and the Haganah in January 1948, provided operations against enemy population centres. These operations were carried out in the following way: either by destroying villages (by firing, blasting and depositing mines in their debris); or by conducting control operations according to the following guidelines: encirclement of the village and internal investigation.

In case of resistance, their opponents had to be annihilated and the population had to be expelled from the State’s borders.

Officially, Plan D had limited objectives, i.e. securing Jewish areas. It did not apply to the entire Palestinian territory, and expulsions were conditional (only in case of resistance). The Israeli historian Benny Morris considers that Plan D was not a political plan to expel the Arabs from Palestine, but admits that from the beginning of April, there were expulsions at both national and local level.

In mid-May 1948, the Haganah clearly took over. It aligned twenty thousand men, including five thousand elite fighters of the Palmach. Although command was unified, they still did not possess enough heavy weapons.

After the creation of the state, the Israeli army was officially created on May 26, 1948. The Haganah then disappeared. It had taken part in the creation of the IDF with the Lehi and the Irgun. Yet, they only had 1,000 and 5,000 fighters respectively, which were suspected by the new government of David Ben Gurion for their past terrorist activities and for their political orientations. 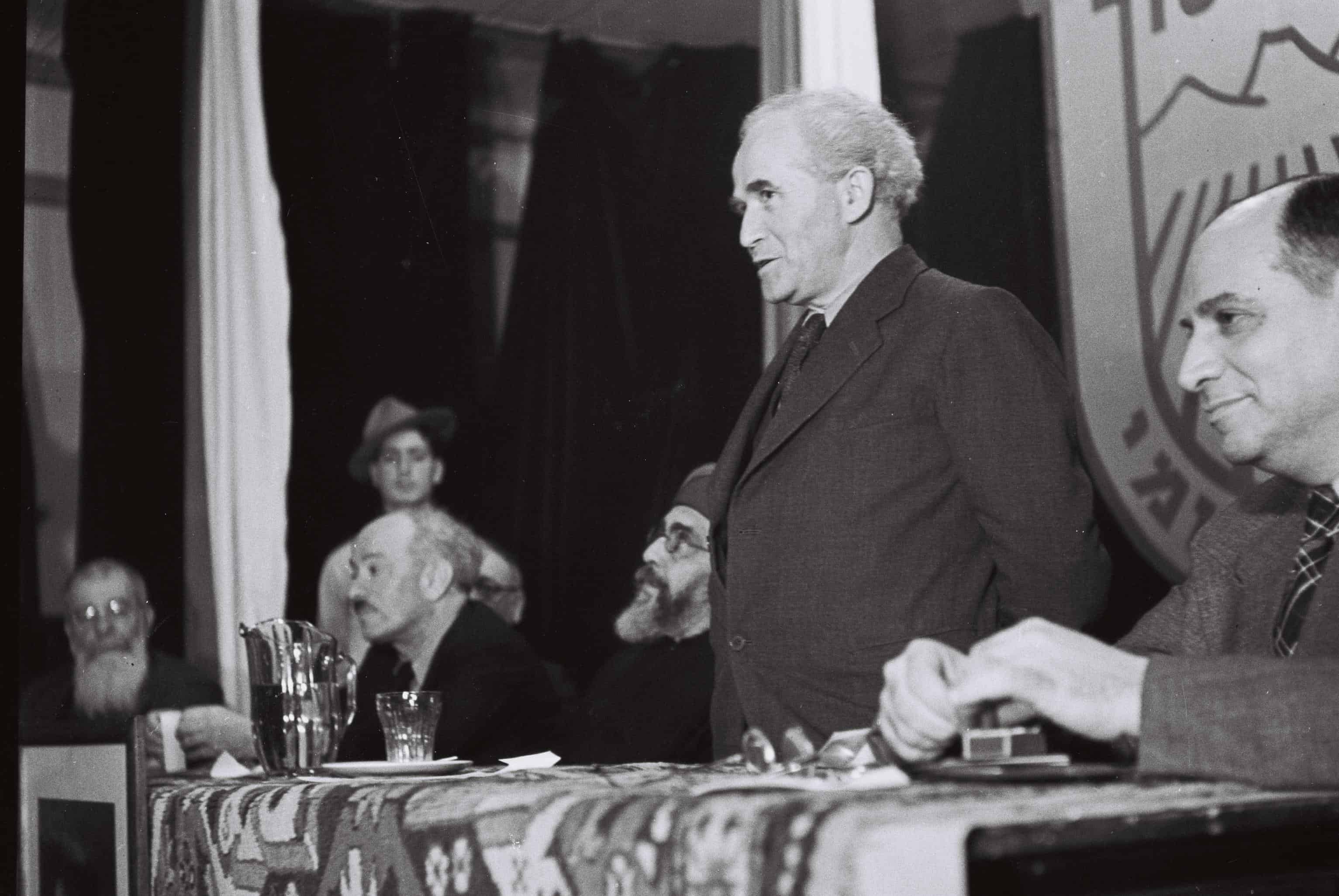 Shortly after the creation of the IDF, during the first truce of the war of independence (11 June-8 July) Ben Gurion decided to dissolve the three brigades of the Palmach: he considered their ideologies to be too far left for his government.

After the war, the Haganah resumed its anti-British operations in Palestine. Some of their actions included: the release of immigrants interned in the Atlit camp; bombings of the country’s railway structures; sabotages and raids against radar installations and the British police. It also continued to support illegal immigration.

On May 29, 1948, less than two weeks after the creation of the State of Israel (May 15), the provisional government created the Israel Defence Forces which replaced the Haganah. The support of any other armed force was also outlawed. The Irgun challenged such decision and this led to a brief confrontation between the Haganah and the Irgun. Finally, the Irgun handed over their weapons and Menachem Begin transformed his militia into a political party, the Herut.

[4.] Van Creveld, M. The Sword And The Olive: A Critical History of the Israeli Defence Force. Public Affairs.