In general, the manor was the dwelling of a feudal lord, and if the lord was the owner of several manors, he only inhabited it occasionally. Sometimes an administrator or seneschal was appointed to control and manage the stately property. The ordinary administration was delegated to a bailiff or a reeve.

Although they were not always equipped with mighty fortifications, as in a castle, many manors were fortified at least in part: they were enclosed within walls or surrounded by a moat surmounted by a drawbridge. Near or inside the manor, there was often a farm, warehouses, and other buildings that needed maintenance (such as stables, etc.). To defend themselves against possible thieves and raiders, manors were often equipped with small porters and towers. However, they were not equipped with large towers or high facades that could withstand a siege. The main feature of the manor was its great hall, to which apartments were annexed after the disappearance of the feudal wars (which allowed for more peaceful family life within the building).

From the beginning of the 16th century, the manors and small castles began to acquire the characteristics and the comforts of the country residences of the gentlemen. These transformations of the late 16th century gave rise to the birth of small Renaissance castles in France, and the Elizabethan and Jacobite style country mansion in England. In the Middle Ages, the manor was the most elementary territorial organisation of the feudal system in Western Europe. The Lord of the Manor was invested with juridical and economic power and derived its sustenance – and power – from the properties it possessed and from the compulsory contributions imposed by law on the peasant population under its jurisdiction. These contributions are known as corvées and were paid either through carrying out free work, by giving goods, or, more rarely, by offering money.

Technically, the Manor House was the home of the lord of the manor and the administrative centre of the manor. However, the term ‘manor’ has also been extended to indicate a large and noble house belonging to families of the small nobility during the late medieval period. Although their house was often fortified, it mostly had the function of displaying the power and importance of the family, rather than defending from intruders.

In England, there are several manors. The Gainsborough Old Hall is one of them: it is one of the most well-preserved medieval manor houses in England and is over 500 years old.

The history of Gainsborough Old Hall

Built by Sir Thomas Burgh between 1460 and 1480, the Gainsborough Old Hall represented not only the residence of the Burgh family but also a demonstration of their wealth and importance. 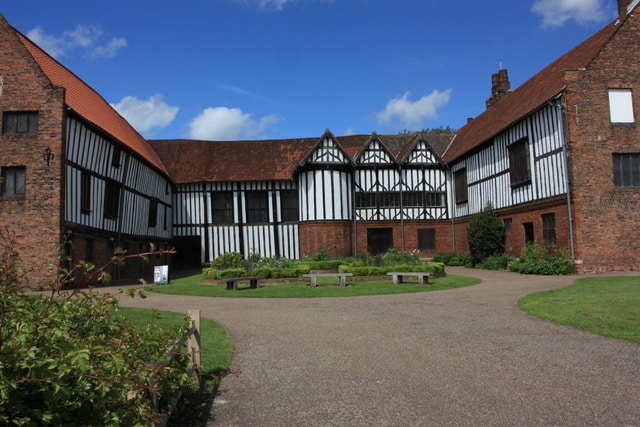 Sir Thomas had been a squire of King Edward IV of England, who, on Christmas 1462, had knighted him and made him his Private Counsellor. Later, he became the King’s representative in Lincolnshire, where he owned manors, land, and houses.

The importance of Sir Thomas and his family grew accordingly, so much so that in 1484, he was visited by King Richard III in Gainsborough Old Hall. A few years later, his descendants received Henry VIII twice in their manor.

When all the descendants of Sir Thomas died without heirs, Gainsborough Old Hall was sold to William Hickman, a London merchant, in 1596, who made many changes and improvements to the building, particularly in the east wing.

Over the years, this manor was used for the most disparate purposes, including for theatre productions.  After many years of neglect, it was saved from demolition in 1949 thanks to an association named Association of Friends of the Old Hall. Finally, in 1970, the Old Hall was donated to the State, and now the County of Lincolnshire manages it as part of its assets on behalf of English Heritage.

The Association of Friends of the Old Hall and the Lincolnshire County Council preserved the Hall, which offers a fascinating perspective on how people lived in the manor during the time it was inhabited.

In addition to the rooms on the ground floor and the first floor (which are perfectly restored in medieval style), the Old Hall also has a typical Elizabethan-style living room on the first floor, with the original furnishings dating back to the period when the Hickman family lived in the house.

Upon entering the Gainsborough Old Hall, and after passing through a kind of medieval pantry, one arrives directly in the main hall of the manor, which consists of a large room with a vaulted wooden ceiling in which the Lord of the Manor used to receive guests and eat meals.

Going up to the first floor through a spiral staircase, one then arrives at a corridor. On the left side of the corridor, three doors lead respectively to a medieval bedroom, to the Elizabethan living room – with its typical furnishings, including the portraits on the walls, musical instruments, and porcelain – and the main bedroom (also in medieval style).

The third room, which is adjacent to the Elizabethan living room, is particularly charming, with some restored furniture – such as the bed, chairs, and cradle – dating back to the Middle Ages.

By descending the staircase, one reaches the dining room, which seems to be a mixture of various styles, with objects that can be traced back to the 1500s and others that seem to date back to a later period.

An enormous kitchen can be reached from the dining room, and it is considered one of the most complete medieval kitchens in England. This room still contains many original elements, including two fireplaces (each large enough to roast an ox), and two bread ovens.

In this room, the Association of Friends of the Old Hall has recreated the atmosphere of the time, furnishing the kitchen and the adjacent storage rooms with replicas of animals, vegetables and food.

As with any old place, the Gainsborough Old Hall has anecdotes related to its history and its inhabitants. The first one is a romantic anecdote.

It is said that the tower of the Old Hall is inhabited by the ghost of Lady Gray, the daughter of the Lord of The Manor who fell in love with a poor soldier and planned to run away with him.

Having discovered the plan, however, her father locked her up in the tower, where she died of a broken heart. According to local legend, the spirit of the girl still wanders in the tower, waiting for the arrival of her lover.

The second anecdote is perhaps less romantic but quite curious. As mentioned earlier, King Henry VIII visited Gainsborough twice. The second time, in 1541, he did so accompanied by his fifth wife, Queen Catherine Howard, whom he had just married the year before and who a few months later would be beheaded on charges of treason.

At that time, the lord of Gainsborough Old Hall was the grandson of Sir Thomas Burgh, Thomas. In 1529, his eldest son, Edward, had married Catherine Parr, but had died just four years after the marriage, in 1533.

The last anecdote concerns the Hickman family. William Hickman and his mother Rose were great supporters of the Church of England Puritan movement and allowed members of the movement to get together and preach in the Hall from 1603 until 1608.