Sir Walter Raleigh was an English courtier, soldier, mariner, coloniser, politician, and writer. He was born around 1552 at Hayes Barton, in South Devon. He descended from a Devonshire family: his father was Walter Raleigh of Fardell, and his mother was Katherine Gilbert.

Before he attended Oriel College (in Oxford), Raleigh fought for the French Protestants (the Huguenots), and in 1580 he fought against the Irish rebels in Munster and also criticised ‘the way English policy was being implemented in Ireland’ (Latham 2018). Thanks to his opinions, he became close to Queen Elizabeth I and started acquiring much wealth through properties and other ‘influential positions’ (Latham 2018). 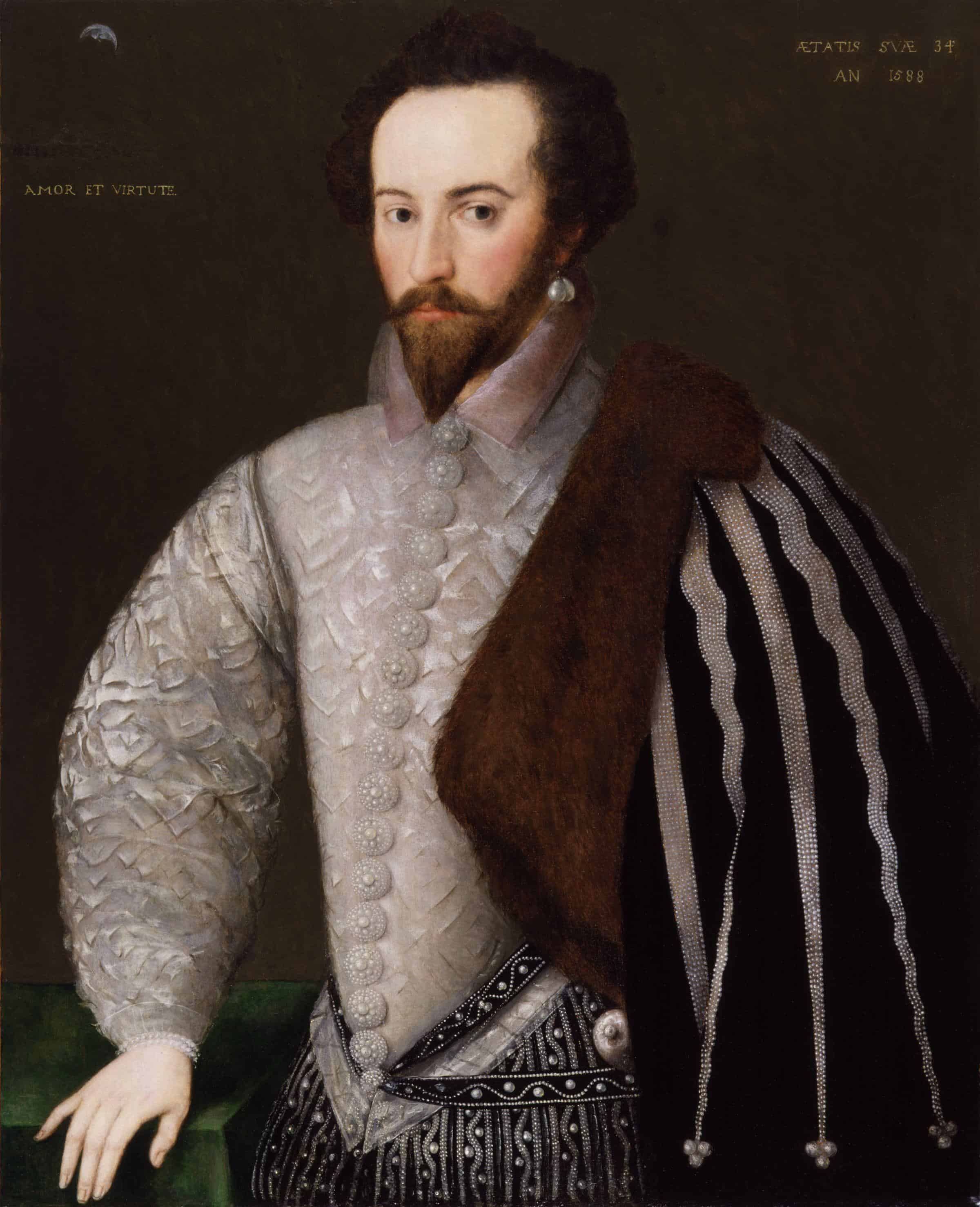 In 1592, Raleigh desired to settle in his home in Dorset with his wife Elizabeth, daughter of Sir Nicholas Throckmorton. However, Raleigh intended to keep it a secret since the queen had a jealous streak. Nonetheless, when Elizabeth gave birth to their son in 1588, the queen discovered his secret and the consorts were imprisoned in the Tower of London. Raleigh was released after he paid with the profits he had gained from one of his previous voyages. Although their first son did not survive, the couple gave birth to their second child, Walter, in 1593; and to their third child, Carew in 1604 (Latham 2018).

After his imprisonment and having lost the queen’s trust, Raleigh never managed regain the same importance in the royal court. What made him even more unpopular was his ‘extravagant’ (Latham 2018) spending habits and his controversial way of thinking.

Raleigh’s colonising enterprises were motivated by his desire to check the power of Spain in the New World. Although his efforts were not successful, he deserves credit for initiating the movement which led to the establishment of English settlements in America. He never went to Virginia (as North America between Florida and Newfoundland was called, in honour of Elizabeth, the Virgin Queen), but he planted, in 1585, 1586, 1587, three colonies on the islands off North Carolina. The first colonists returned to England; the others disappeared, presumably wiped out by the Indians.

Tobacco and the potato were brought back by Raleigh’s men. Sir Walter popularised smoking and introduced the potato into Ireland.

In 1595, Raleigh undertook a voyage to Guiana (South America), fabled kingdom of gold, El Dorado. He sailed up the Orinoco, made friends with the natives, and gathered stories about fabulous gold mines. Therefore, once out of prison, with the help of his brother Sir John Gilbert, Raleigh was able to gain the financial help of ‘investors, soldiers, ships, and supplies’ (Minster 2017). On February 6 of the same year, the two left England with five ships and arrived on the Island of Trinidad. the Spanish felt that they were being aggressively confronted by the English. In fact, Raleigh and his brother ‘captured’ the city of San Jose and ‘took’ Antonio de Berrio, i.e. ‘a high-ranking Spaniard’ who had spent several years in the search of the mysterious El Dorado (Minster 2017). 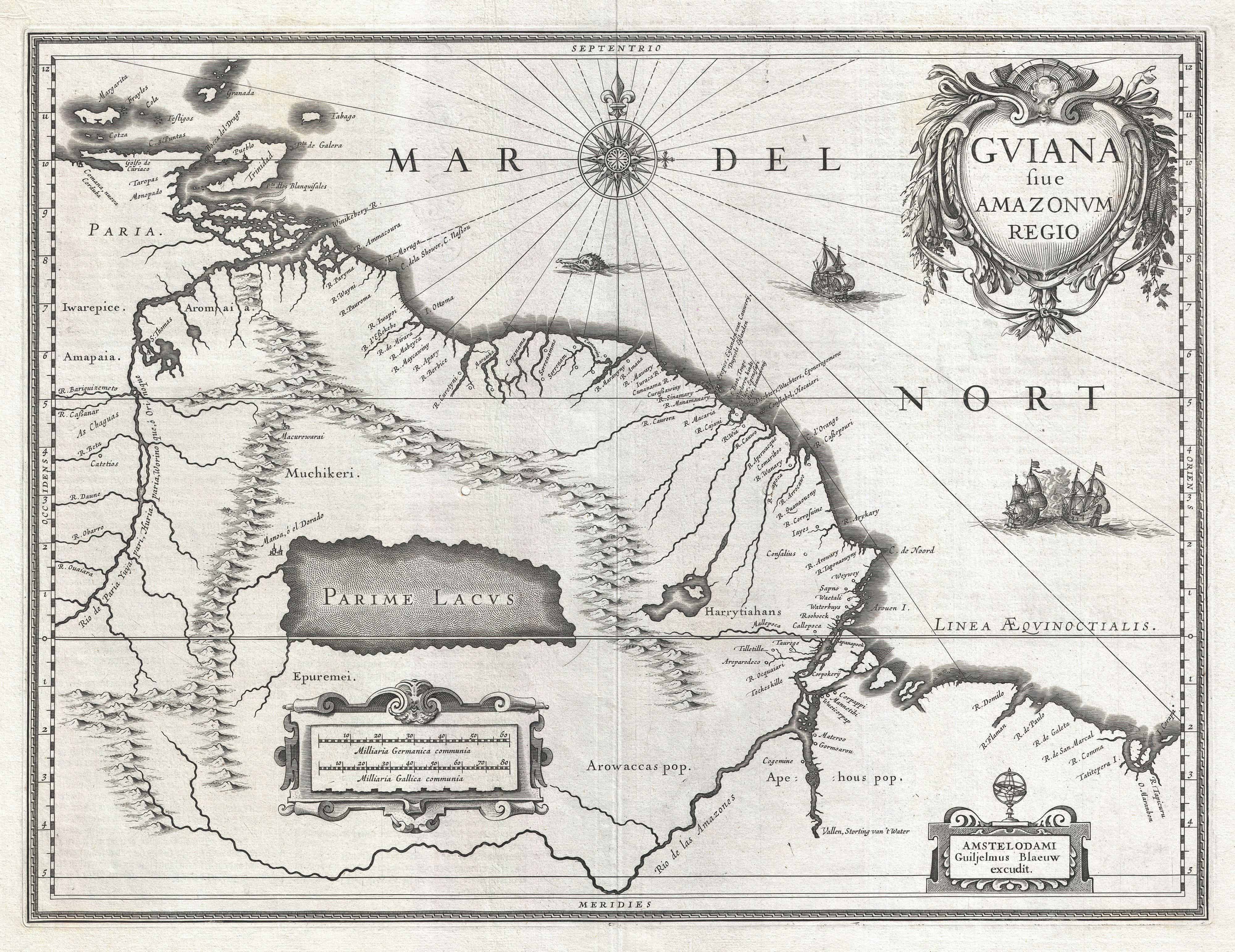 Although Raleigh was able to discover some gold mines in South America, nobody supported his intention to colonise the area (Latham 2018). On his return he attempted to interest his countrymen in this land by publishing The Discovery of the Large, Rich and Beautiful Empire of Guiana (1596), a book full of detailed observations and quaint tales. He took part in two famous expeditions against the Spaniards leading the van in the brilliant attack on Càdiz in 1596, and distinguishing himself in the raid of the Azores in 1597.

Raleigh under James I and his death

Shortly after James I had succeeded  Elizabeth in 1603, Sir Walter was accused of conspiring to overthrow the king and seat Arabella Stuart on the throne. In fact, Raleigh adopted an aggressive stance towards the Spanish colonisers of the New World.

In spite of a brilliant defence, he was convicted for treason, on very doubtful evidence, and sentenced to death. Reprieved, he was imprisoned in the Tower of London, where he remained for thirteen years, occupying himself with chemical experiments and writing.

Raleigh was able to regain his freedom by convincing the avid James I that he knew the location of a valuable gold mine in Guiana. He set out on his last, fatally fruitless voyage in 1617.

While he lay sick abroad ship, his men went up the Orinoco in search of the mine. Disobeying king James’ specific order, they fought the Spaniards, sacked the settlement of San Tomàs, where Raleigh’s son Walter was killed, and returned empty-handed. King James, pressed by Spain and enraged at Raleigh’s failure, had him arrested upon his return.

After a perfunctory hearing, the old sentence was confirmed and Sir Walter Raleigh was beheaded on October 29, 1618. Before being executed, Raleigh uttered his last words:

‘I THANK my God heartily that He hath brought me into the light to die, and not suffered me to die in the dark prison of the Tower, where I have suffered a great deal of adversity and a long sickness; and I thank God that my fever hath not taken me at this time, as I prayed God it might not.

There are two main points of suspicion that his majesty hath conceived against me, wherein his majesty can not be satisfied, which I desire to clear and resolve you in. One is, that his majesty hath been informed that I have had some plot with France, and his majesty had some reason to induce him thereunto. One reason that his majesty had to conjecture so was that when I came back from Guiana, being come to Plymouth, I endeavored to go to Rochelle, which was because I would fain have made my peace before I came to England. Another reason was, that upon my flight I did intend to fly to France for saving of my life, having had some terror from above. A third reason was, the French agent’s coming to me, and it was reported I had commission from the king of France.

The second suspicion was, that his majesty hath been informed that I should speak dishonorably and disloyally of him. But my accuser was a base Frenchman, a kind of chemical fellow—one whom I knew to be perfidious; for being drawn into this action at Winchester, in which my hand was touched, and he being sworn to secrecy overnight, he revealed it in the morning.

But in this I speak now, what have I to do with kings? I have nothing to do with them, neither do I fear them. I have now to do with God; therefore, as I hope to be saved at the last day, I never spoke dishonorably, disloyally, nor dishonestly of the king, neither to this Frenchman, nor to any other; neither had I ever, in all my life, a thought of ill against his majesty; therefore I can not but think it strange that this Frenchman, being so base, so mean a fellow, should be so far credited; and so much for this point. I have dealt truly, and I hope I shall be believed. I confess I did attempt to escape, and I did dissemble, and made myself sick at Salisbury, but I hope it was no sin. The prophet David did make himself a fool, and did suffer spittle to fall upon his beard, to escape the hands of his enemies, and it was not imputed to him as sin, and I did it to prolong time till his majesty came, hoping for some commiseration from him.

And now I entreat you all to join with me in prayer, that the great God of Heaven, whom I have grievously offended, being a man full of all vanity, and having lived a sinful life, in all sinful callings, having been a soldier, a captain, a sea captain, and a courtier, which are all places of wickedness and vice; that God, I say, would forgive me, cast away my sins from me, and receive me into everlasting life. So I take my leave of you all, making my peace with God.’ (Sir Walter Raleigh 1618). 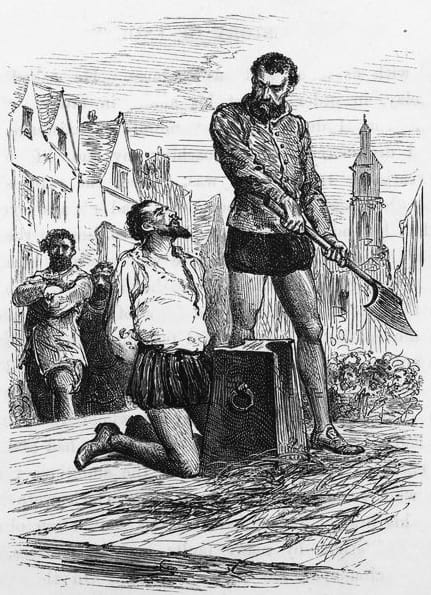 After the defeat of the Spanish Armada (1588), in which he took no active part, Raleigh saw much of the poet Edmund Spenser in Ireland. He introduced him at court and encouraged the publication of his work Faerie Queene. Sir Walter published in 1591 A Report of the Truth of the Fight about the Isle of Azores.

Throughout his life, Raleigh also wrote poetry, of which The Lie, a bitter attack on worldliness, and The Passionate Man’s Pilgrimage, a moving expression of religious faith, are famous examples. He also wrote many prose works on history, philosophy, politics, naval and military affairs. His vast, unfinished History of the World (from the Creation to 130 B.C.), written while he was in prison, was published in 1614. It was so highly regarded that it went into eleven editions within seventy-three years. It is still interesting for the expression of personal opinion and references to events in the life of this remarkable man, often called the last of the Elizabethans.

[3.] Sir Walter Raleigh (1618). His Last Words on the Scaffold. The World’s Famous Orations. Great Britain: I.