On May 16, 1916, following a month-long preparatory work between Sir Mark Sykes and François Georges-Picot, the Sykes-Picot agreement was signed between France and the United Kingdom at Downing Street within the presence of Paul Cambon, Ambassador of France in London, and Sir Edward Gray, Secretary of State at the Foreign Office. On the British side, the Bunsen Commission, in which Sir Mark Sykes took part in the spring of 1915, laid the foundations. 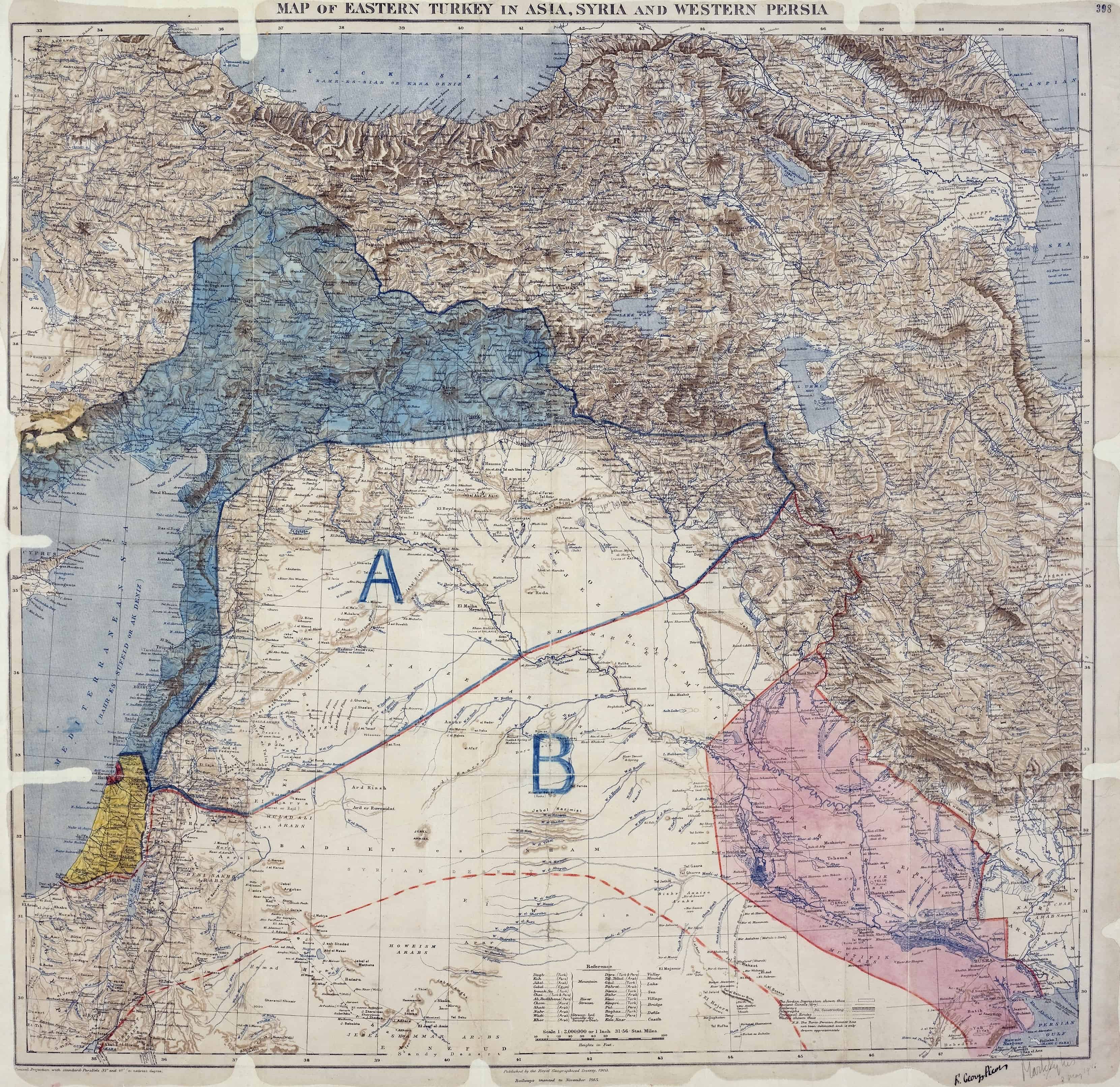 In the long term, it planned to divide the Middle East, that is to say, the space between the Black Sea, the Mediterranean Sea, the Red Sea, the Indian Ocean, and the Caspian Sea. These territories were an integral part of the Ottoman Empire. The Russian Empire participated in the deliberations and agreed, like Italy, under the terms of the secret treaty.

The Middle East was divided, in spite of the promises of independence made to the Arabs, in five zones.

The agreement was ratified and legalised with a proper mandate from the League of Nations at the San Remo Conference.

France received a mandate for Lebanon and Syria, whereas the United Kingdom for Mesopotamia, Transjordan and Palestine.

The Franco-British agreement had to face a double opposition: the Turkish national revolt of Mustafa Kemal Atatürk in Anatolia opposing the Treaty of Sèvres; and the rise to power of the Hashemites in Mesopotamia (present-day Iraq) and in Syria.

In Damascus (under the French domination), Faisal, son of the sheriff Hussein, was proclaimed king of the Arab Kingdom of Syria. The French were driven out of Anatolia by the Kemalists at the end of the campaign of Cilicia. However, they managed to beat Faisal and made him leave Damascus. In order to compensate him, the English installed Faisal on the Iraqi throne. The Treaty of Lausanne, in 1923, ratified the integration of South-East Anatolia to the new Republic of Turkey.

In the end, with the 1919 cession of Mosul to England by Clemenceau and the birth of modern Turkey, as well as the creation of present-day Saudi Arabia, the division of the Middle Eastern territories never really happened.

Another dangerous myth is the belief that Arab unity was hindered by European imperialism. In fact, this is a misconception since the Middle East was already deeply divided: Damascus and Baghdad had different administrations for several centuries, Aleppo and Damascus were rival, and the dynasties of Hashemites (moderate Islam) and Saud (Wahhabi fundamentalism) opposed each other. Moreover, Shereef Hussein was perfectly aware of the Sykes-Picot Agreement. Documents in the archives also indicate that a copy was intended for him.

The historian Eugene Rogan agrees with the statements made above by fellow historians, and he points out that the British did not betray the Arabs; nor did they stand on the side of the Zionists. More than wishing to create a Jewish or an Arab state, they wanted above all to defend their own interests, especially those that concerned the Suez Canal. Overall, the English desired to continue to control the region by undermining the nationalist movements. Thus, the promise not of a Jewish state but of a Jewish national home was made in order to create a community that would facilitate the British control over Palestine. Because of their imperialist experience, they thought they could handle the contradictory demands of both communities. It was not until 1937 that the British acknowledged that they no longer had control over the situation.