The First Italian War of Independence

Since the breakup of the Roman Empire, Italy had separated into several different city-states and small kingdoms. In 1815, after the Napoleonic Wars, control of the northern Italian states of Lombardy and Venezia was returned to the Austrian Empire of the Habsburgs, by whom they had long been dominated. Neighbouring Lombardy was Piedmont, a state ruled by the King of Sardinia. The authorities were keen to crush revolutionary ideas and return to the pre-Napoleonic status quo, but some Italians had been inspired by events in France and wanted more say over their own lives. This desire for better rights for ordinary citizens developed into a movement to make Italy stronger by unifying all its states into one country. This was known in Italian as Risorgimento. At the beginning of 1848, a year of revolutions across Europe, several states in Italy had uprisings by people demanding written constitutions that guaranteed them certain rights and freedoms. Charles Albert, the King of Sardinia, saw an opportunity to increase his power by harnessing Risorgimento and placing himself at the head of a campaign to get control of Lombardy and Venetia from the Austrian Empire. 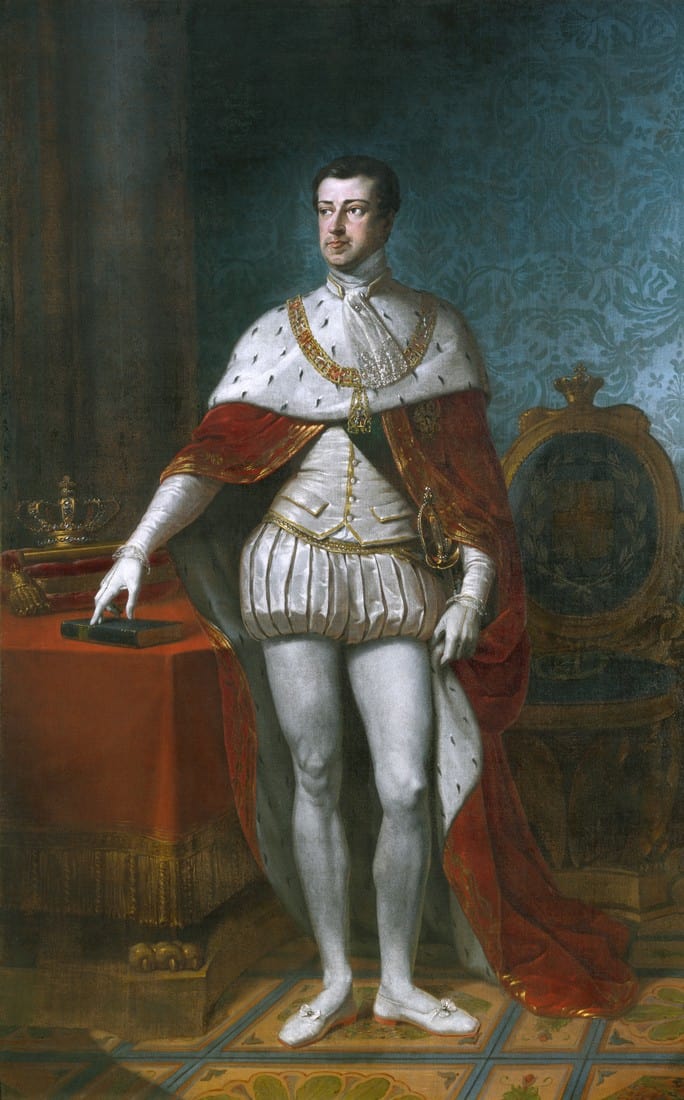 In March 1848, there were citizen uprisings in Milan and Venice that forced the Austrian garrisons out of the cities. King Charles Albert of Sardinia declared war on Austria on 23 March. As his Piedmontese armies marched towards the Austrian-controlled state of Lombardy, they were joined by troops from other Italian states. Over the next few days the Italians reached and crossed the border into Lombardy. They then slowly advanced towards the Mincio river, which marked the border between Lombardy and Venetia, allowing the Austrians to carry out an orderly retreat to strong positions. By 8 April most of the Austrian troops in northern Italy had withdrawn to the Quadrilateral fortresses at Verona, Peschiera, Mantua and Legnago, where they could regroup and plan counterattacks against the Italians. The Austrians were commanded by 81-year-old Josef Radetsky.

The first military clashes of the war came at various crossings of the Mincio, where from 8-11 April 1848 the Austrian rearguard failed to prevent the Italians from moving into Venetia. Meanwhile Austrian reinforcements were coming, marching into Venetia from the east. By 27 April the Italians were besieging the Austrian-held fort at Peschiera, and three days later on 30 April there was a clash at Pastrengo as they successfully forced the Austrians out of several strongholds in the vicinity. Although this success was a boost to Italian morale, they failed to cut off the Austrian supply route to the north, a move which would have been a serious blow to the Austrian war effort. The Italian cause had also taken something of a knock when Pope Pius IX withdrew his support, although many of the troops from the Papal States chose to remain and fight despite this.

The Battle of Santa Lucia on 6 May 1848 saw the Italians attack Austrian-held villages west of Verona. Although there was some success, the failure of attacks in other parts of the line led to the Italians abandoning the gains they had made rather than leave their troops exposed. The Austrians were able to retake the villages without opposition, and the battle marked a turning point in the campaign, where the Italians lost the initiative they had held to that point. Two days later the other Austrian army, under General Laval Nugent, fought Papal troops at the Battle of Cornuda. When expected reinforcements failed to arrive, the Papal army was forced to retreat. Ill health forced Nugent to hand command over to Georg Thurn, who marched the troops to link up with Radetsky’s Austrians at Verona. 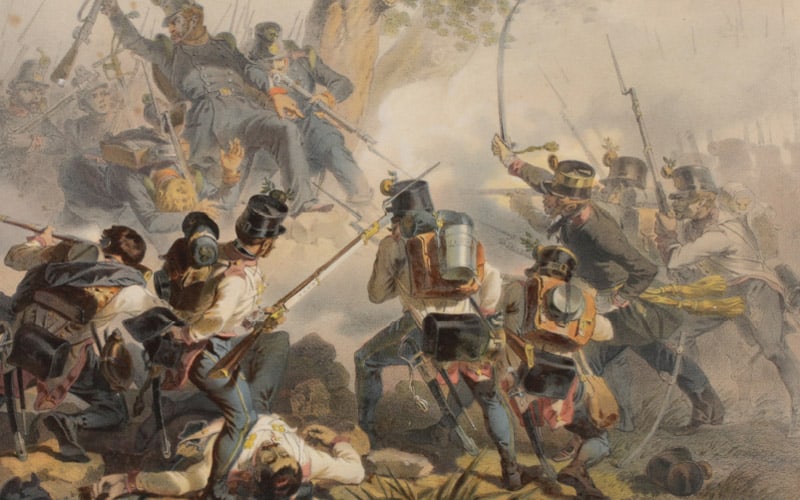 The aim of the Austrians was to break the siege of Peschiera, but an attempt to break through the Italian lines at Goito on 30 May failed, and on that very same day, the Austrians at Peschiera surrendered. Charles Albert was hailed by his victorious troops as the ‘King of Italy’. However, this would prove to be the high-water mark of Italian success. On June 11 the Papal troops in the east were forced to withdraw from the war after losing the battle for the city of Vicenza. Their departure weakened the Italian position in Venetia and allowed the Austrians to regain control of Padua, Trenso and Palmanova.

After several weeks of inactivity, troops from the Savoy region retook the town of Governolo from the Austrians. Although it was an impressive victory, the Italians were now overextended. The Battle of Custoza, playing out between 22-27 July 1848, saw the two armies confront each other in almost equal numbers. At first the Italians were able to repel Austrian attacks around Rivoli, but over the next few days the Austrians gained several crossings over the Mincio river. By 27 July, the Italians were falling back. Charles Albert wanted to negotiate a truce but, finding the Austrian demands excessive, decided instead to retreat to Milan. The city was still in the hands of a provisional government after ejecting the Austrian garrison earlier in the year, and Charles Albert hoped to gain control of it for Piedmont and the Sardinian crown. 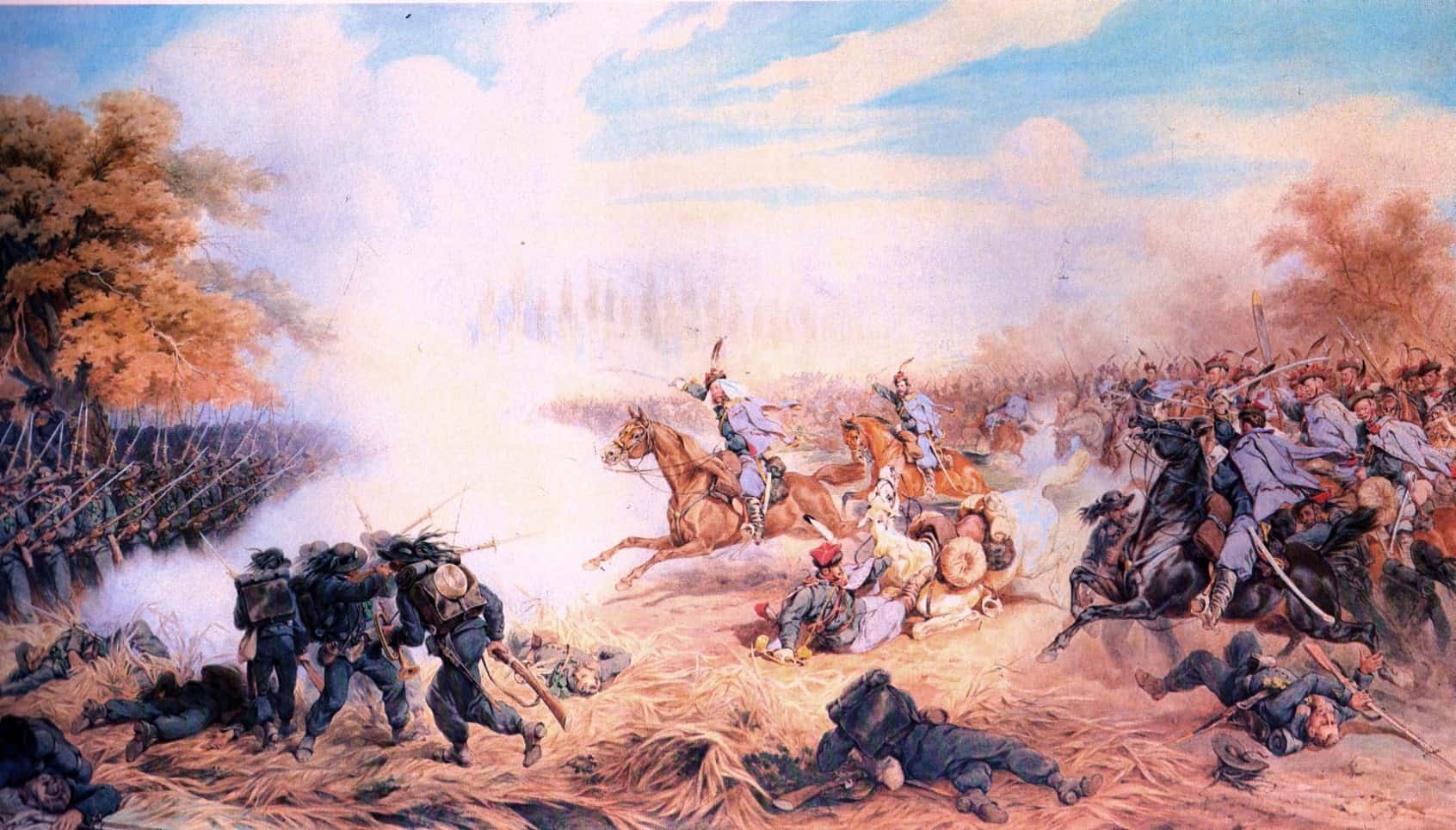 In Milan, the Italian soldiers found the citizens ready to resist the Austrian army to the death. However, Charles Albert was concerned at the lack of supplies, and decided to abandon the city. He left under cover of darkness, protected by armed guards against any Milanese citizens who might take violent objection to his decision.

On 6 August, Charles Albert’s armies had withdrawn into Piedmont, back inside Sardinian territory. On 9 August an armistice was signed with the Austrians. Although the fighting had officially stopped, Italy had not returned to the pre-1848 status quo. Venice was still in rebel hands, and had agreed to be annexed by Sardinia. Garibaldi and Mazzini were still trying to fight for republicanism across Italy, and in February 1849 Tuscany and Rome declared themselves to be republics.

The Chamber of Deputies in the Kingdom of Sardinia voted to break the terms of the armistice and resume hostilities against Austria in early March 1849. Charles Albert officially declared war on 20 March, but the Austrians had not wasted those few weeks and were ready with a surprise invasion of Piedmont. On 23 March 1849 the two armies met at the Battle of Novara. Although the attacking initiative changed hands several times over the course of the day, the end result was a heavy defeat for Piedmont. That night Charles Albert announced that he would be abdicating his throne in favour of his son and heir, Victor Emmanuel II. His first duty as king was to meet Josef Radetzky to negotiate the terms of the armistice. The Italians were forced to allow the Austrians to keep garrisons in their territory, and to pay reparations. The Peace of Milan officially came into effect on 6 August 1849.

In the months following the Battle of Novara, other Italian states were gradually returned to their pre-1848 rulers. The last holdout was Venice, which finally surrendered to the Austrians on 22 August after being stricken with starvation and disease. Although the spirit of Risorgimento seemed to have been extinguished, the desire for greater freedom and national unification in Italy would continue to grow. 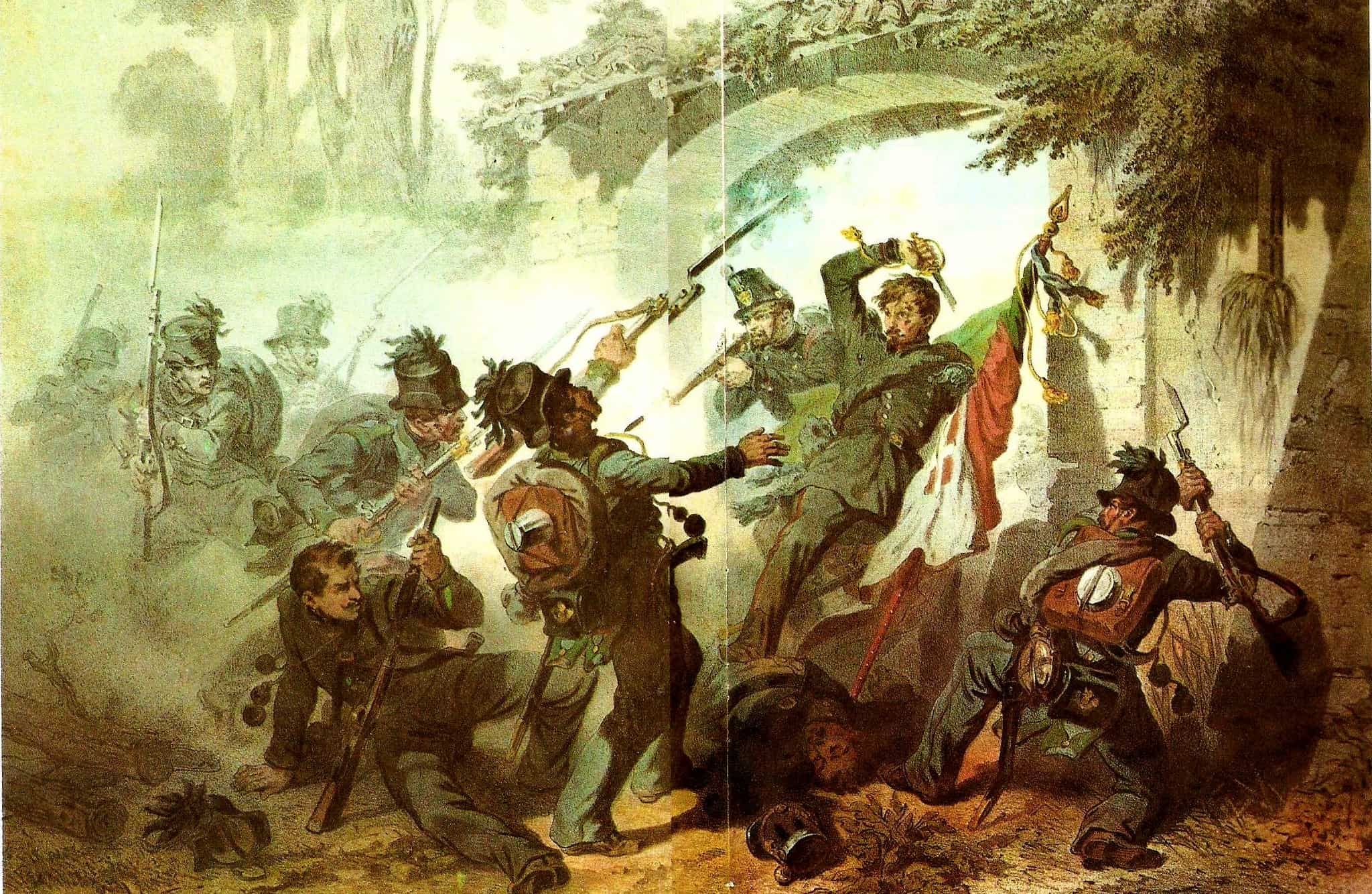 In 1848 Italy was divided into several different states and kingdoms under various different rulers. The call was growing for greater freedoms for ordinary Italians, and for a return to a united Italy last seen under the Romans, inspired in part by the French Revolution. In 1848, several Italian cities and states saw uprisings. In Milan and Venice, the ruling Austrians were ejected from the cities. King Charles Albert of Sardinia decided to declare war on Austria as a way of harnessing the revolutionary movement to increase his own power in northern Italy. He began his campaign in March 1848, marching into the Austrian puppet states of Lombardy and Venetia alongside allies from other Italian states. Despite initially driving the Austrians back, the Italian campaign ultimately failed and Charles Albert signed an armistice in August 1848. In the following year he declared war on Austria again, but the conflict was swiftly ended when the Austrians launched a surprise invasion of Charles Albert’s own territory of Piedmont. The First War of Italian Independence was officially ended by the Peace of Milan on 6 August 1849. Charles Albert abdicated and his son Victor Emmanuel II became King of Sardinia.