The German physicist Wilhelm Roentgen was born in Lennep, Prussia, on March 27, 1845. He received the degree of Doctor of Philosophy from the University of Zürich in 1869. In 1875, after having held lesser positions at the universities of Würzburg and Strasburg, he was appointed professor of mathematics and physics at Hohenheim. One year later he switched back to Strasbourg, where he remained until 1879 when he received a professorship at the Hessian University at Giessen on the recommendation of Hermann Helmholtz. In 1885, Roentgen became director of the Physics Institute at the University of Würzburg. It was here that he made his classic discovery of X rays in 1895. The discovery came about during an investigation of the phenomena of cathode rays. Roentgen observed that a distant fluorescent screen was caused to glow as a result of the operation of the vacuum tube, despite the fact that the tube at the time was surrounded by heavy paper that was opaque to ordinary light rays. He concluded that these rays of great penetrating power, entirely different from cathode rays, were due to some unknown form of radiation, to which he gave the temporary name ‘X rays’. The rays were sometimes called Roentgen rays in his honour. 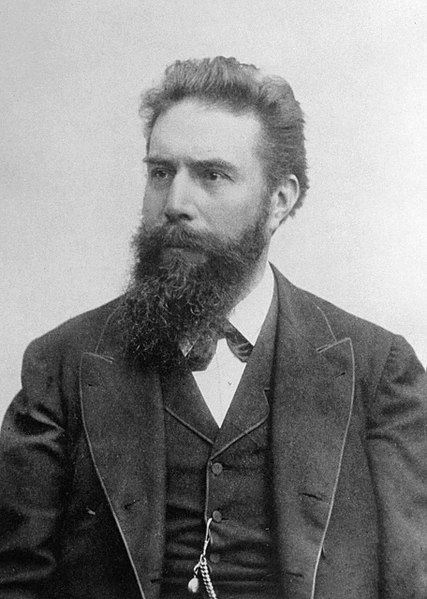 Roentgen’s final appointment was that of professor of experimental physics at the University of Munich, from 1900 to 1920. He conducted numerous other researches, including the following: investigation of the ratio of the value of the specific heat and constant pressure to the specific heat at constant volume in gases; studies in elasticity and capillary action; measurements of the heat conductivity of crystals; the absorption of radiation by water vapour; investigations of the rotation of the plane of polarisation of polarised light; and a study of piezoelectricity.

Roentgen received several notable awards, among them the Rumford Medal of the Royal Society of 1890 for his discovery of X rays, the Royal Merit of the Bavarian Crown, discovery of X rays, the Order of the Iron Cross from Germany, the honorary degree of Doctor of Medicine from the University of Würzburg and the Nobel Prize for Physics in 1901. He died of cancer on February 10, 1923, in Munich.

Today, X-Rays are used for a variety of inspections: they have become a popular way to analyse problems related to bones, teeth, and organs within the body; but are also used daily in airports to inspect whether the interiors of luggage conform to the airline’s policies. X-rays provide with a glimpse of what is on the inside of things (Briggs 2019). 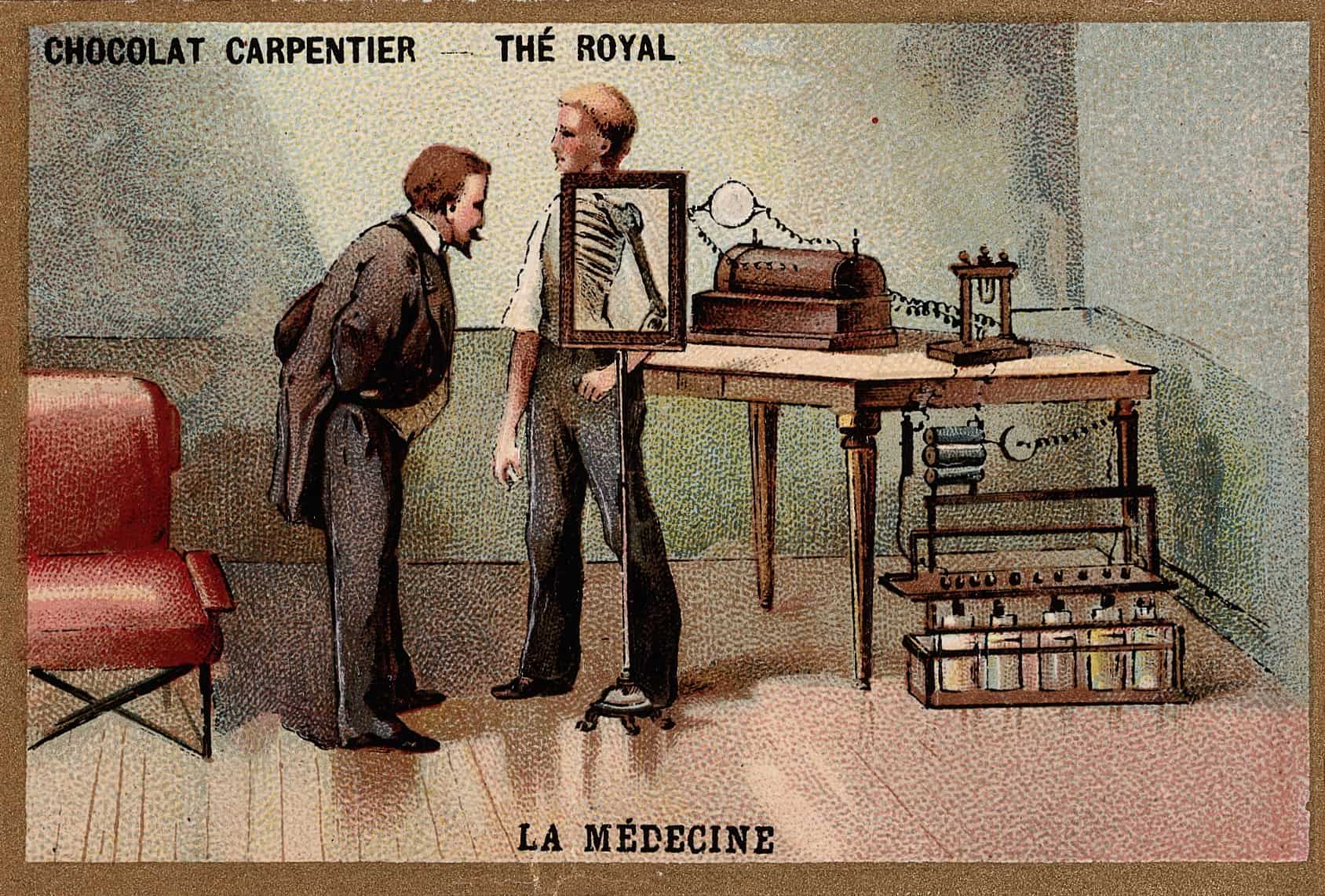 When Roentgen discovered he worked for seven weeks in solitude, keeping his scientific finding to himself, and not sharing them with his assistants’ friends, or even his wife.

Despite the outstanding insights x-rays provide us, they were not an intentional discovery, and not even Roentgen had a complete understanding of his own invention. For the first time, x-rays allowed to see what was happening within the body without opening the flesh through surgical intervention. In essence, the process was a non-invasive procedure.

Following his dazzling discovery, Roentgen carried out his first photographs not only on metal objects but also on his wife’s hand and her wedding ring: the German scientist was able to see right through his wife’s hand since her flesh became transparent, whereas her ring became a simple dark shadow. These ‘photographs; are known as röntgenogram (Briggs 2019). In Germany, the X-ray is sometimes called Röntgen ray.

However, it is necessary to note that taking an x-ray was not safe and healthy. Of course, people and Roentgen himself was not aware of the potential dangers that radiations could have on the body cells. In fact, those who practised x-rays, ‘received a radiation dose 1,500 times greater than today’s dosage’: this explains why they suffered ‘radiation burns and loss of hair’ (Waters 2011). Moreover, it took a great amount of time for a scientist to do an x-ray: whereas today it takes 20 milliseconds, at the beginning of the XX century, it took over 90 minutes (Waters 2011; citing Kemerink). One can just imagine the damage on the human tissues! 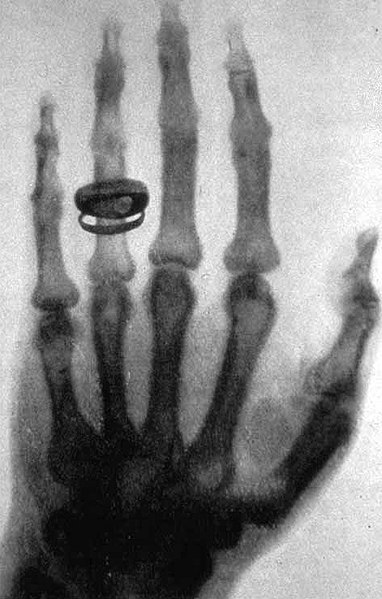 Certainly, Roentgen’s contribution to medicine is paramount, and his Nobel Prize in Physics (1901) was well deserved.

X-rays are produced when electrons travelling at high velocities interact with matter. When electrons travelling at speed of light collide with the atoms of any material, they lose their kinetic energy rapidly. Most of this energy is transformed into heat, but a small fraction, generally less than 1%, is covered into x-ray energy. This energy is given off in the form of x-ray particles called photons which are characterised as particles having energy but no mass.

X-rays consist of invisible radiation that can penetrate all types of matter to varying degrees. X-rays are one of the many forms of electromagnetic radiation, and they, therefore, have many properties that are similar to those of the other forms, such as light waves and radio waves. The major difference between the various forms of electromagnetic radiation is their wavelengths. Radio waves have very long wavelengths, ranging from about a foot to several miles.

Like light waves, x-rays can react with the chemicals on a photographic film and cause them to darken. This property has proved invaluable in medicine, industry, and scientific research. The picture of the inside of an object can be made by allowing the x-rays that penetrate it to strike a photographic plate. Because x-rays do not pass through all material equally well, those portions of the objects that offer resistance to the passage of the X rays will appear as lighter areas on the photograph than those portions through which the X rays pass readily. For example, bone tissue is more resistant to the passage of X rays tissues of which the skin and the internal organs are composed. Therefore, the bones will be pictured as lighter areas on an X-ray photograph, and breaks in the bone, through which X rays pass readily, can be detected.

The damaging biological effects of x-rays were recognised shortly after their discovery by Roentgen. When Roentgen made his announcement, many laboratories thought the world already had the necessary vacuum tubes and sources of high voltage to produce x-rays. However, because of the absence of any sensation and the lack of immediate physiological reaction, many experiments unwittingly overexposed their hands. It was soon observed that x-rays could produce an acute reaction (erythema) similar to sunburn, except that the damage to the skin, being deeper, was more permanent. The resulting ulcerations were frequently followed after a while by cancer. For many of the early workers, this required amputations of the fingers or hands. In some cases, it ultimately resulted in death.

It was found that the acute skin reactions could be avoided by reducing exposure through the use of shielding (usually with lead), by using remote controls, and by limiting intervals of exposure. However, certain chronic effects resulted even when there was no noticeable effect on the skin. These effects were confirmed and studied by the use of experimental animals. Among the effects of x-rays (and also of other ionising radiations, such as the gamma radiation from radioactive materials) are: 1. temporary blood changes from relatively minor overexposure; 2. permanent blood changes (aplastic anaemia) from long-term exposure; 3. an increased incidence of cancer (including leukaemia); 4. a general ageing effect (life shortening); and 5. cataracts. In addition, it has been shown in experimental animals (such as fruit flies, mice, and rabbits) that even very small amounts of chronic radiation exposure to large populations result in increased harmful genetic effects (congenital malformations, small births, and functional effects, among others) due to an increased mutation rate. The applicability of such data to humans is generally believed to be valid by most geneticists.

The various biological effects of radiation on human beings are dependent upon what organs of the body are exposed; for example, blood disorders result from exposure of the blood-forming organs (principally bone marrow), and genetic effects resulting from exposure of the reproductive organs.

In 1896, the first radiology department was created in the Glasgow Royal Infirmary, and here, Dr John Macintyre (the head of department) carried out some outstanding x-rays which clearly indicated the presence of ‘a kidney stone, [and] a penny in the throat of a child’ (British Library). In the same way, Dr Hall-Edwards used x-rays to discover e needle in one of his patient’s hands (British Library).

X-rays played a great role during the Boer war, and the First World War, since they were employed when treating the soldiers’ fractures and when finding ‘imbedded bullets’ (British Library).

[3.] British Library (no date). Roentgen’s discovery of the x-ray. Available from: http://www.bl.uk/learning/cult/bodies/xray/roentgen.html